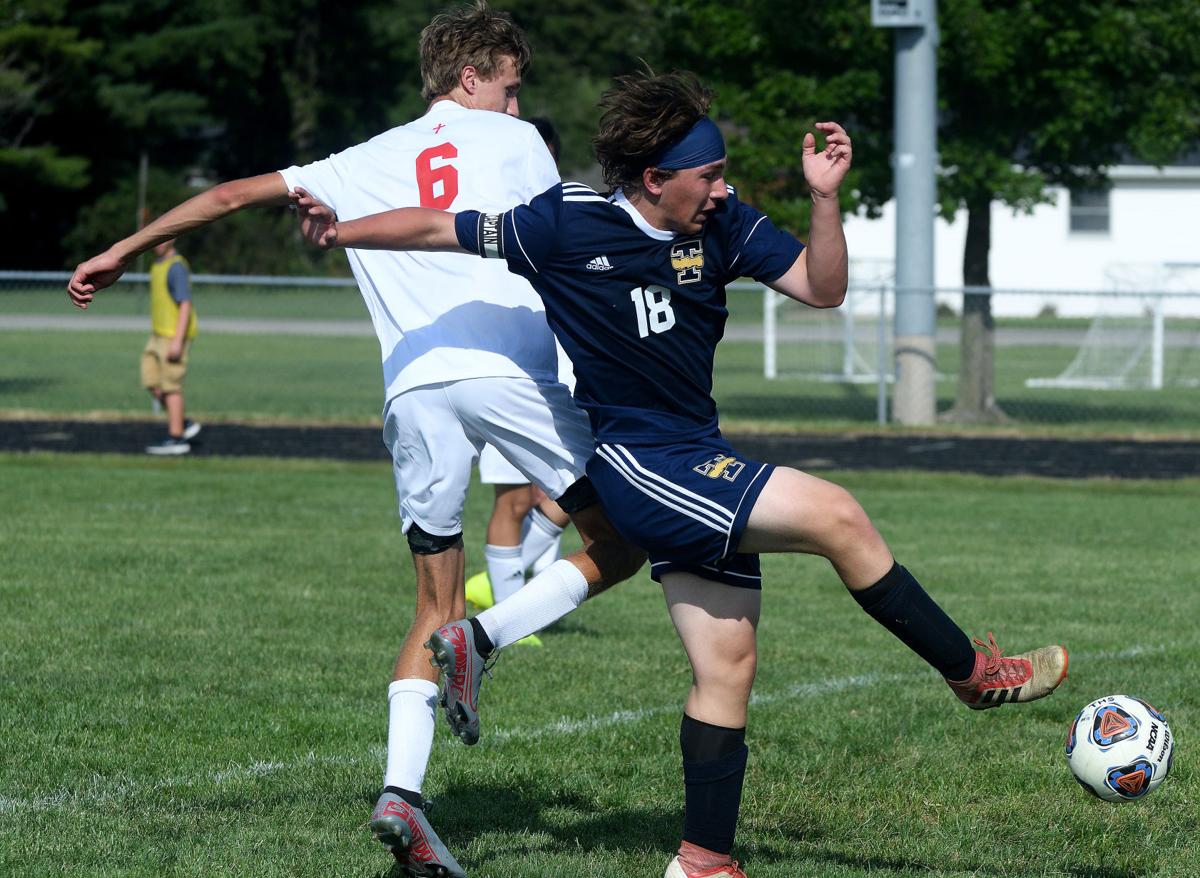 Teutopolis’ Noah Hemmen (18) centers the ball while St. Anthony’s Andrew Dust (6) attempts to swipe it away during the Wooden Shoes 5-0 victory at Teutopolis during the St. Anthony/Teutopolis Soccer Tournament Saturday afternoon. 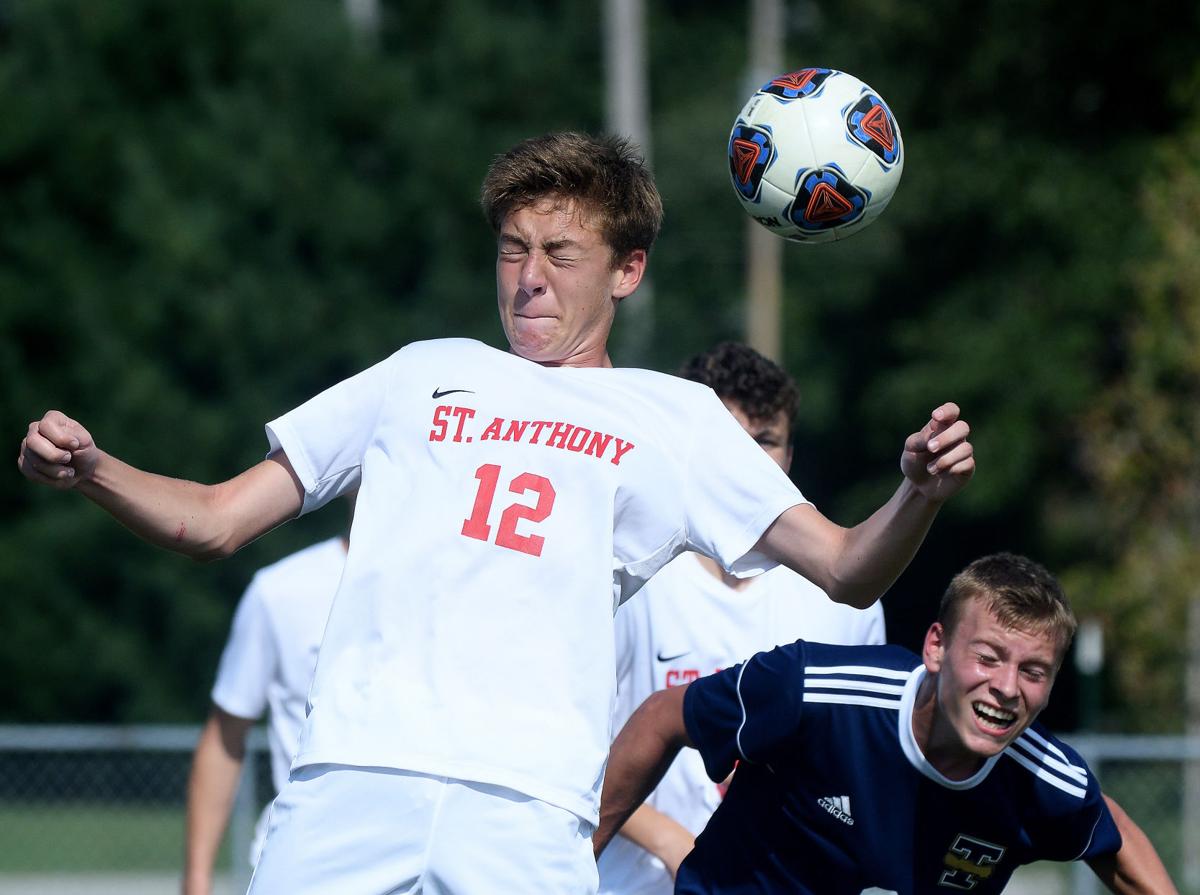 St. Anthony’s George Scheidemantel (12) attempts to head the ball out of the box in the first half of the Bulldogs 5-0 loss at Teutopolis during the St. Anthony/Teutopolis Soccer Tournament Saturday afternoon.

Teutopolis’ Noah Hemmen (18) centers the ball while St. Anthony’s Andrew Dust (6) attempts to swipe it away during the Wooden Shoes 5-0 victory at Teutopolis during the St. Anthony/Teutopolis Soccer Tournament Saturday afternoon.

St. Anthony’s George Scheidemantel (12) attempts to head the ball out of the box in the first half of the Bulldogs 5-0 loss at Teutopolis during the St. Anthony/Teutopolis Soccer Tournament Saturday afternoon.

Teutopolis’ soccer team relentlessly pressured an injury-depleted St. Anthony team scoring four seconds before the end of the first half taking a 2-0 lead they wouldn’t look back on en route to a 5-0 victory over the Bulldogs.

“We were pretty fresh considering we played Altamont in the 12:30 game. They were ready to go,” said Wooden Shoes coach Aaron Wendt. “I told them you don’t get many opportunities to play St. Anthony at home and they played up to the level they needed to today.”

The Bulldogs were starting the last game of the tournament again without Wade Lawrence whose ankle was stepped on during the Christ Our Rock match Thursday and played with several others dealing with lesser injuries.

“We had a lot of injuries. Key players were just giving me what they had,” St. Anthony coach Martin Reyes said. “I told them from the beginning that Ttown is a really good team. I think if we were healthy we could give them a good match. I told them it’s going to be mental.”

With the Shoes entertaining a 1-0 lead by senior captain Alex Deters at the 20 minute mark, the Shoes capitalized on their persistent pressure with a header by Gavin Huber from 10 yards out on the offensive left side with four seconds left in the first half to take a 2-0 advantage going into the break.

“I think that was a big boost coming into halftime. Scoring with four seconds left, anytime you can take a lead on St. Anthony is good,” Wendt said. “1-0 leads aren’t secure in a tournament like this. There’s plenty of time to come back in the second half and getting that one was a boost for the kids. It was a nice goal too. It was confidence boost.”

St. Anthony came out with Reilly Ashton in goal instead of Ivan Dong due to the forward who was noticeably limping.

“Reilly couldn’t run. He said he could stop and jump,” Reyes said. “I didn’t want to get him injured. He’s one of our key players. That’s the reason why I made the change.”

The Shoes’ Bannick Kaleb started the scoring at 27:17 with a rocket under Ashton’s arm into the bottom left corner from 15 yards out followed by Derek Deters running through the Bulldog defense to score at 24:32 making it 3-0 and 4-0 respectively.

Ashton survived a brief flurry deflecting a rebound off the top crossbar at 22:04 but relented a goal at 18:31 to Littame Alessio Bucciarelli making the final score 5-0 on a sun scorched field.

“At halftime we told them we needed to work on our finishing,” Wendt said. “We created a ton of opportunities but needed to finish well and be composed in front of the goal.”

Reyes reiterated his young defense, led by Will Fonner, still needs time to find themselves.

“We’re still trying to figure out the defense and how it’s going to look like We need to communicate better. If we can get healthy that’ll be a big part of it.”

For the tournament, the Shoes finished 3-1.

Wendt said they communicated better than on Thursday night.

“We communicated more, we hustled the ball, we won the 50/50s comparatively to the Thursday night game where we were a completely different team,” he said. “We tried some different formations today and I think the kids rolled with it and worked really well. It showed.”

Moving forward, the Wooden Shoes go into Tuesday against Charleston.

“It’s going to be a tough game. We’re going to try to recover from the five games this week,” Wendt said. “I think the biggest thing will be to try to get our legs back under us for the next week or two.”

For the tournament, the Bulldogs finished 2-2.

“I think the kids got to see what I see in them,” Reyes said. “That’s the cool thing about the tournament that we accomplished.”

Reyes said that he was proud of the squad’s performance despite the injury bug.

“You can get angry, you can communicate, but you can’t quit. I think the majority of them gave me what they could.”

Moving forward the Bulldogs face an Effingham team at home Tuesday. Reyes is formerly an assistant coach for the Hearts.

“It’s going to be a tough one. They’re a very good team,” Reyes said. “ I love a lot of those kids. My goal is to have a good showing.”