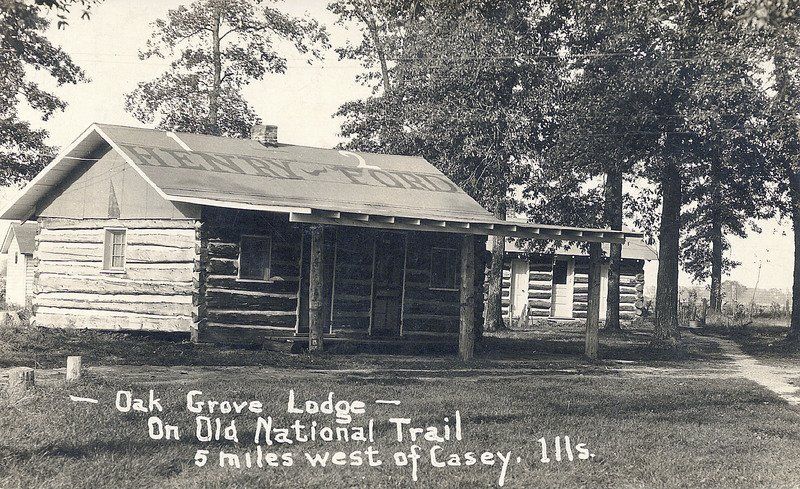 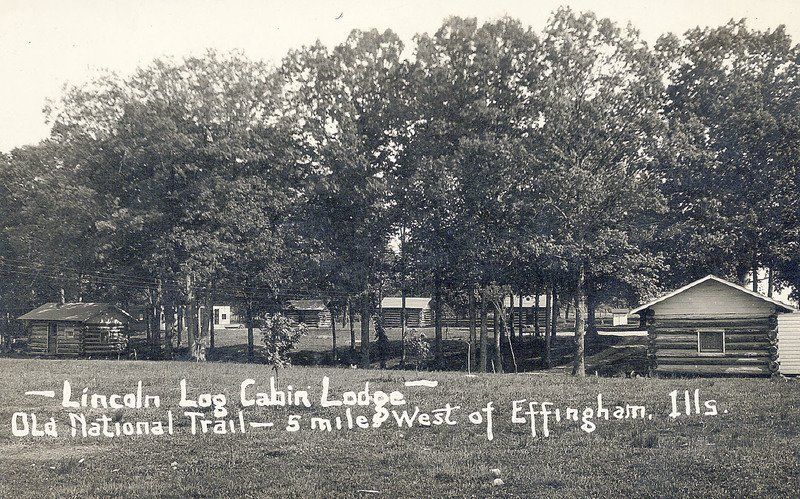 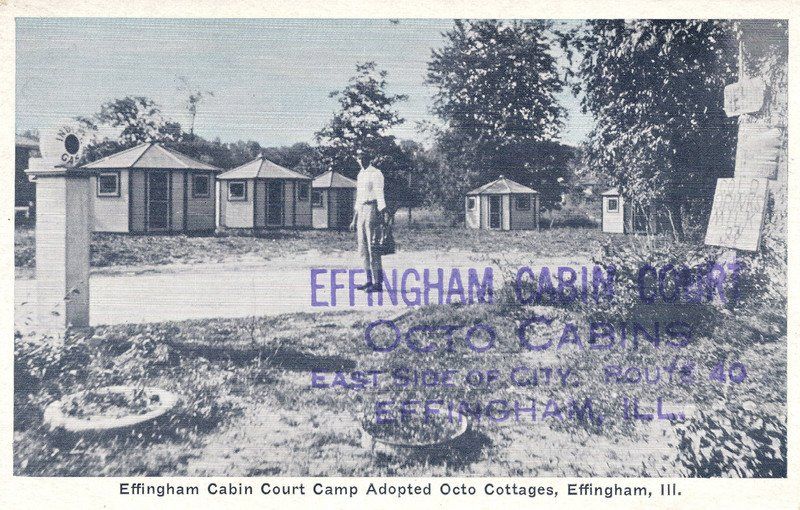 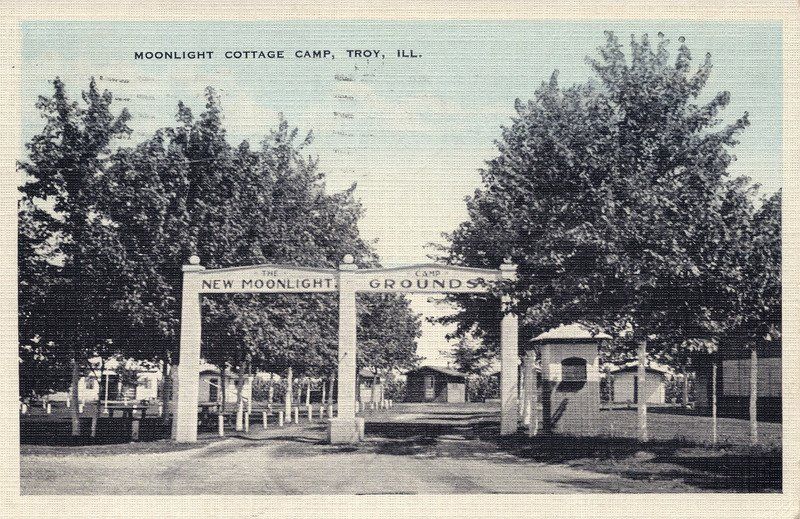 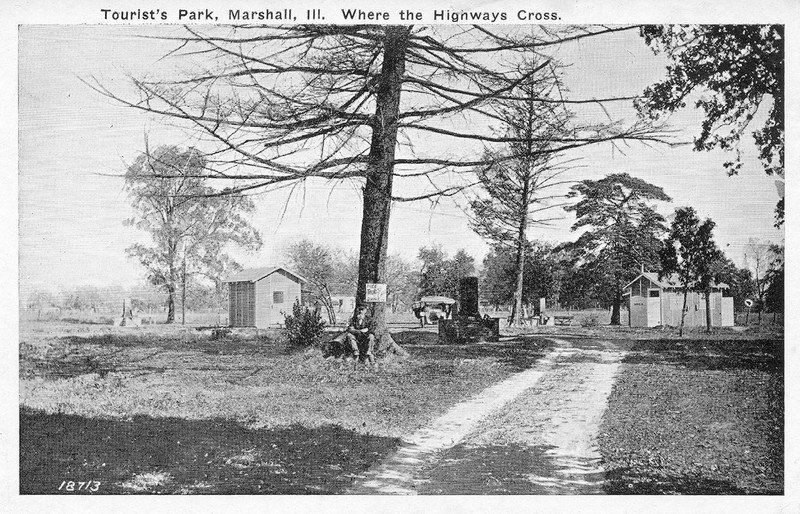 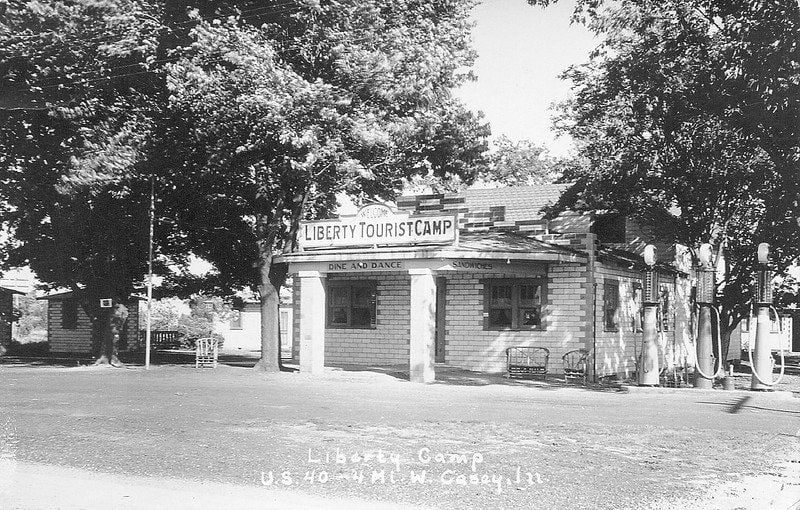 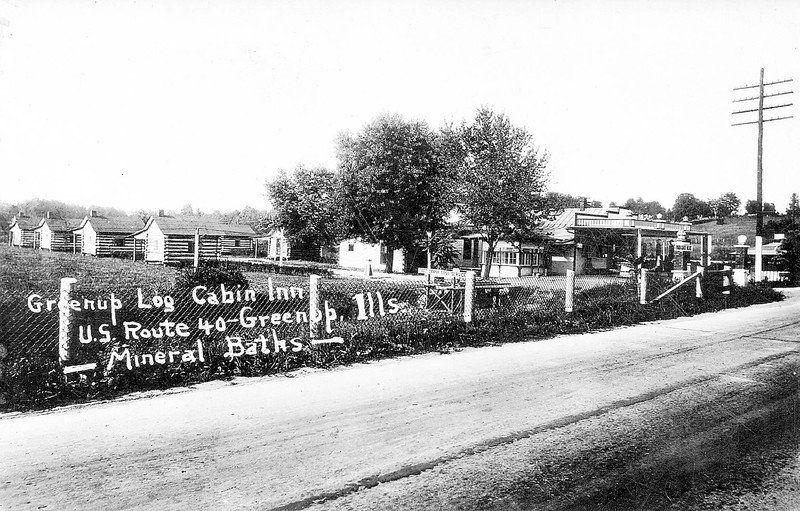 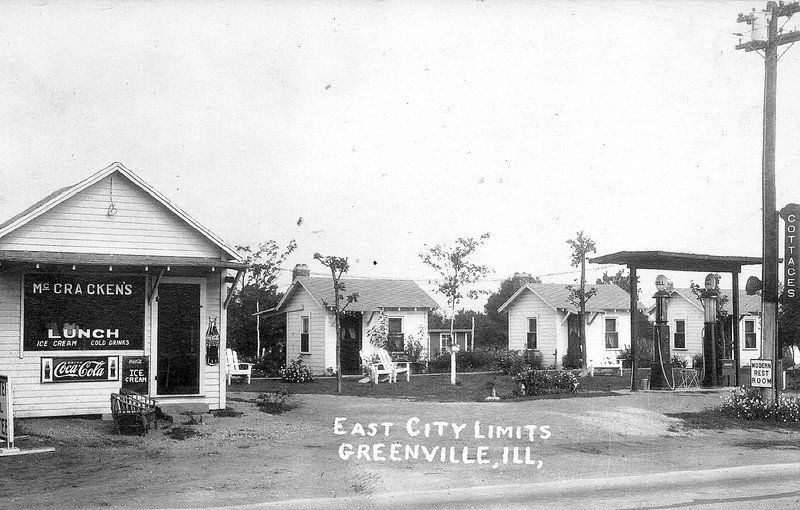 Prior to the American automobile coming into widespread use in America in the early 20th century, most Americans traveled by railroads like the Illinois Central; Vandalia; St. Louis, Vandalia, and Terre Haute; and the Pennsylvania Railroad. While this allowed Americans to see more of the country, they were held hostage by train schedules, tracks, and depot locations. Warren Blasco wrote in his Americans on the Road: From Autocamp to Motel, 1910-1945 “in a sense the car freed the motorist not only from the centrally set railroad schedule but from his own internal work-disciplined schedule.” The modern landscape along highways and the built-up structures along them were a direct result of the automobile. Thus began Americans’ love affair with the “horseless carriage”. They discovered the freedom of the open road and the adventure of motor touring. In a way, the ideals of the pioneer spirit, rugged individualism, and freedom had been reborn. Americans sought adventure, natural beauty of the landscape, strengthening of family bonds, and communing with travelers from all over America. The automobile offered Americans an escape from industrialization and urbanization that many believed had stripped America of her national character defined by wide-open spaces with natural beauty and frontiers to be explored.

Outlook magazine declared in 1910 that there were about 350,000 autos in use in America. The article advocated people traveling across America in their cars to “not only show the country to the people, but show the people to the country.” By 1912 Outlook declared the “automobile has changed interior traveling from a physical racking bore to a distinct frontier outing and a pleasure trip.” The modern roadside motel emerged to meet the needs of Americans seeking adventure and evolved to provide security in the perceived chaos of a strange place.

Rural landowners weren’t always thrilled with the new motor tourists. Campers often carried food packaged in tin cans and left many of them behind prompting the nickname “tin can tourists.” Some tourists destroyed orchards and crops and even the land itself by camper trailers. By the 1920s the auto camping recreational activity showed no signs of abating. Blasco claimed the auto camping experience offered travelers a taste of what early pioneers endured. He also asserted that in the growing American society “growing specialization seems to threaten individual autonomy and auto camping offered training in traditional values, self-help, and all around dexterity.” Magazines like Forest and Stream instructed campers how to pack their cars, purchase or make specialized tents that incorporated the car itself, and build seats that folded to beds. Eventually municipalities and national parks responded to the camping craze and the farmers’ complaints by opening free auto camps.

The American Automobile Association stated in 1923 that there were 1,800 public auto camps in the United States. Over 2,000 such free camps existed by 1924. The National Park Service reported over 100,000 auto campers had stayed in the Canyon Automobile Camp in Yellowstone National Park in 1924. The fee for camping was $7.50 for which campers had the security of patrolling park rangers, toilets, showers, drinking water, firewood, and picnic tables.

By 1929 a Chicago Tribune article predicted over five million Americans would camp that year with their cars.

Some motor camp operators noted a difference between “desirable” tourists and “undesirable” vagabonds. The desirable tourists were willing to pay for accommodations that freed them from packing all the camping equipment and yet still offered privacy in a pastoral setting. Farmers and rural entrepreneurs built small cabins with sparse interiors, while others built more elaborate bungalows with amenities like a bed and mattress. Operators charged modest fees to attract desirable tourists and eliminate the less desirable ones. The new “cabin camps” still provided camaraderie of the early auto camps as travelers shared bathrooms and campfires. Cabins “resolved the auto camper’s dilemma of how to go ‘light but right’ to move freely and yet to live comfortably. By patronizing the commercial cabin camps, the motorists now sacrificed romantic autarchy for the sake of easy mobility.”

In a 1927 New York Times article stated “touring motorists can now sleep in bungalows, if they do not want to pitch tents — large roadside industry developed.” The article also foretold the future of competition among roadside cabin camps and their descendants, the motel. Some operators brought guests flowers and other provided hot water as amenities. The security of bungalows that could be locked provided tourists with peace of mind.

After World War II American tourists were ready to hit the road again. Some concerns were the nation’s cars that sat through years of rationing and material shortages, the condition of neglected roads, and availability of lodging. By 1948 motor courts were meeting the demands of tourists and giving resorts and hotels increased competition.

William Barker of the Chicago Tribune reported that “during the last years of Prohibition, some cottage camps developed a distinctive shady reputation.” FBI director J. Edgar Hoover’s report titled “Camps of Crime” in 1940 said camps offered more anonymity and privacy than any other form of lodging. That led to moral crusaders waging war on the camps. Hoover “warned of an implicit immorality and tendency to criminality fostered by the motel.” Barker informed his readers that motor court operators had joined forces to self-regulate and police their peers establishing such organizations as United Motor Courts, Inc., American Motor Hotel Association, and Quality Motor Courts.

Motor courts sprang up along the National Road in Illinois during this period. Several of them were in Effingham County like the Effingham Cabin Court featuring Octo Cabins designed originally as chicken coops and the Lincoln Log Cabin Camp six miles west of Effingham. Drawing from my extensive postcard collections, I’ve included some of the more interesting ones from Marshall to East St. Louis on its 164-mile journey in Illinois. Some of the local ones, readers should recognize from the past. Very few examples of these unique structures survive today. This is just more of Effingham County’s and the National Road’s rich and diverse history.

• “America’s Roadside Lodging: The Rise and Fall of the Motel” by Lori Henderson 2009

• “Americans on the Road: From Autocamp to Motel” by Warren Belasco 1979

• “The Motor Vagabond, His Wanderings at Home and Abroad” by Henry Farrand Griffin in Outlook magazine 1914