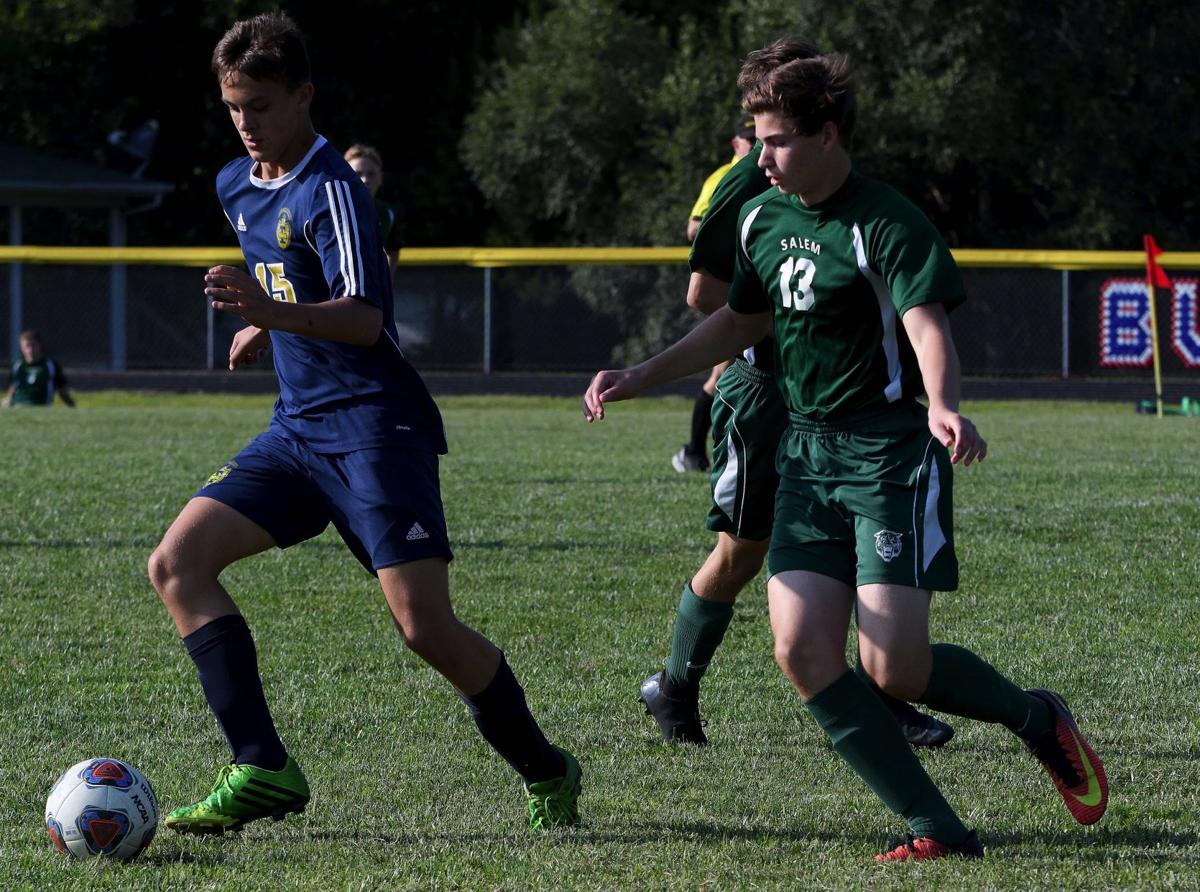 Teutopolis’ Kaleb Bannick dribbles away from the Salem defender in the team’s 5-0 win over Salem at the St. Anthony Invitational Tournament. 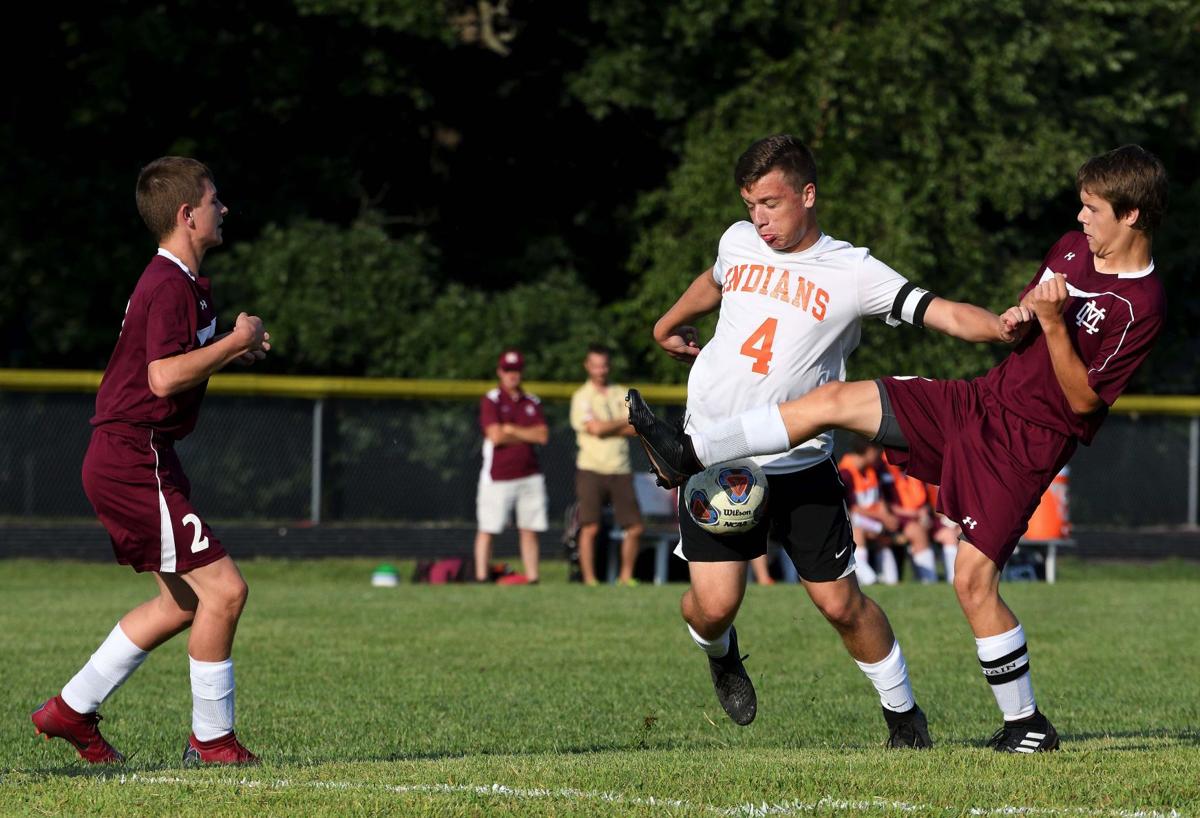 Altamont’s Jason Burns (4) attempts to dribble around the Mt. Carmel defender in the team’s 4-0 loss.

Teutopolis’ Kaleb Bannick dribbles away from the Salem defender in the team’s 5-0 win over Salem at the St. Anthony Invitational Tournament.

Altamont’s Jason Burns (4) attempts to dribble around the Mt. Carmel defender in the team’s 4-0 loss.

Area teams saw split results on the first day of the St. Anthony Invitational Tournament Thursday, with the Wooden Shoes of Teutopolis running away with it against Salem in a 5-0 win, followed by a 4-0 loss from the Altamont Indians against Mount Carmel.

“I think the guys were ready to come out and play after Monday’s game,” said Teutopolis head coach Aaron Wendt. “They pressed Salem pretty well. Our seniors took control of communication, letting everyone know what was going on.”

The Wooden Shoes hit the field running and that they did all day. Just three minutes in, Teutopolis drew a penalty kick in the box and was converted by Alex Deters to put the Wooden Shoes up 1-0 early.

Just three minutes later, the Wooden Shoes threatened again; this time on a cross from the right side into the box. They were able to get a little help, as the ball hit off the head of a Salem defender and went into the net for an own goal, giving Teutopolis a 2-0 lead before the 10-minute mark.

Teutopolis controlled the game from then on, playing great anticipation defense and not allowing Salem to even get into their third of the field.

The solid defense turned into more offense, as Gavin Huber netted a goal with just five minutes left in the half to take a 3-0 lead into halftime.

Just five minutes into the second half, the Shoes scored yet again, this time it was senior midfielder Lucas Drees, putting his team up 4-0.

Despite being up, the Wooden Shoes kept attacking, putting multiple shots on goal on trips inside the Salem third of the field, but the shots were either saved or just wide.

But with seven minutes to go, now playing striker, Alex Deters scored on a powerful header from the weakside of the net to help seal the win.

“He definitely has a nose for goal,” Wendt said. “In that second half, we moved him to striker and he somehow manages to get open every time he’s in the box on corners even though he’s been one of the smaller guys on the field. But he’s always gotten to that space and sees that space that opens up for him.

“It’s still really early in the season. We are still switching personnel around and the formation is still changing, so I think there’s definitelt room to play up top with Jarrett Hardiek, They make a good combination together.”

Freshman goalie Mitchell Haller had some big saves in the final minutes to help preserve the clean sheet for his team.

In the second game of the day, the Altamont Indians were defeated by Mount Carmel 4-0.

“We came out with no life,” said Altamont head coach Jeff Walton. “We had no enthusiasm, no drive and no push. Coming into a tournament that, two years in a row we’ve been second place, we’ve had ourselves in contention, so we should be gobbling at this opportunity coming of a win on Tuesday.”

The Indians started off well, turning defense into counter attacks, getting into their opponent’s third of the field four times in the opening five minutes, outnumbering Mount Carmel’s chances to that point.

Altamont had two chances to get on the board with five minutes remaining, but a shot from the top of the 18 went just wide and a sliding save from the Mount Carmel goalie ceased their chances.

With just over a minute to go, Mount Carmel scored from the right side of the box to take a 3-0 lead into halftime.

Mt. Carmel was able to score right out of the half to go up 4-0, sealing the win for the Eagles, as the Indians would go on to lose by that score.

“I think it’s more of a reiteration of what we can do that’s needed,” Walton said. “We don’t need to re-invent the wheel, we just got to do it the way we can. We need to work on defense and pressuring the ball and taking the passes away.”

Judy Louise (Morris) Baker, 76, of Windsor, IL, passed away Tuesday, January 18, 2022, at SBLHC, Mattoon. Memorials are suggested in lieu of flowers to JDRF.org (for Juvenile Diabetes) A Celebration of Judy's Life will be held at 3:00pm Monday January 24, 2022, in the Swengel - O'Dell Funera…