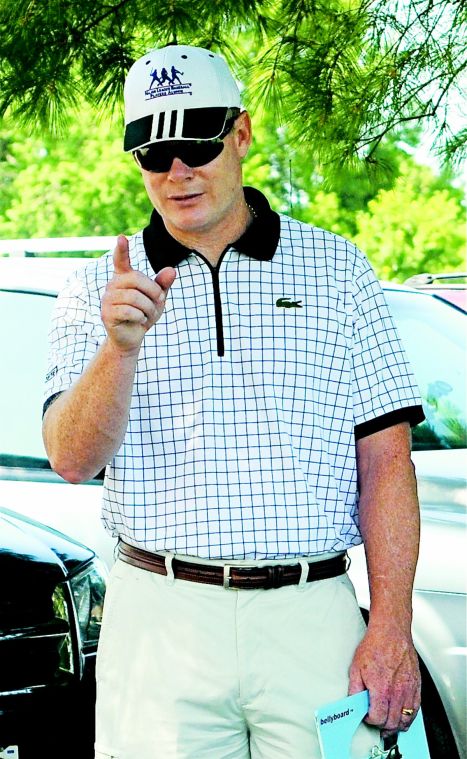 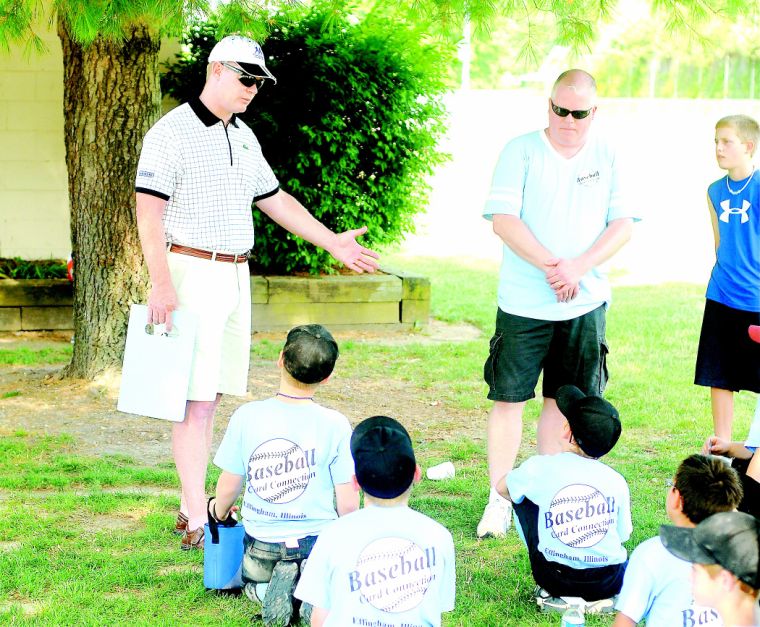 Before his standout prep career at Charleston, successful college seasons at Eastern Illinois University and even his major league career, Stan Royer spent his formative baseball years at Community Park in Effingham.

When Royer played, there was no right field fence at what is now the Cal Ripken League field. The infield wasn’t sodded, and the Khoury League field was just being built.

Royer got to see all those changes — and the renovations to Paul Smith Field, where he played against Effingham as a member of the Charleston Trojans — when he visited Effingham on Tuesday morning to speak with a future generation of major leaguers.

Royer said his message for the little leaguers in Effingham — and at other Cardinal Camps he attends — is put into realistic terms. Making the major leagues is no easy task.

“We try to set the expectations for kids to let them know it is a very difficult road. But that doesn’t means it’s not doable,” Royer said. “I’m standing here in front of them, and I played at these fields like they did.”

There wasn’t one standout memory Royer could recall about his days at Community Park. Instead, like most young baseball players, he just remembered the fun he had playing.

“Little League was fantastic playing here,” he said. “You play so many games it’s hard to pick out one or two things that really happen. I just remember playing and enjoying myself with all the guys on the team.”

Royer eventually moved to Charleston, and his standout prep baseball career made him a 10th round selection by the Atlanta Braves in the 1985 MLB amateur draft. Royer didn’t sign, and instead decided to stay home, attend EIU and play baseball for the Panthers.

A few factors played into Royer’s decision to forego a professional career at first and attend EIU. His father was a teacher and stressed the importance of a college education, and Royer himself wasn’t sure at 17 years old he was ready to be a professional baseball player. What sealed it, though, was the opportunity to improve his game.

“Why wouldn’t I be better in three years or four years of college getting to play at a higher level?” Royer said. “Shouldn’t it be obvious that you should be better, and shouldn’t you elevate yourself potentially in the draft? That’s what we thought, and it happened to work out that way.”

Royer, who is now in the EIU Athletics Hall of Fame, played three years for the Panthers from 1986-88. He earned co-MVP honors in the Mid-Continent Conference in 1988, finished his career with a .316 batting average and ranks third in career RBIs (151) and fourth in home runs (34) for the Panthers.

Come the 1988 MLB Draft, Royer had improved from a 10th-rounder out of high school to the No. 16 overall pick of the Oakland Athletics.

“To be a first round pick, you’re the top of the heap in that particular year of the draft,” Royer said.

But Royer readily admits he wasn’t the third “Bash Brother” even if he had 72 home runs during his time in the minor leagues.

“I’m afraid I wouldn’t have a forearm left. It was truly men amongst a little boy. Spring training, I hit balls out. Those guys would hit them 100 feet over the fence. Watching the ball come off their bat compared to mine I was like, ‘Holy cow, is this what it’s going to take to get there.’”

Of course, Canseco’s and McGwire’s steroid use during that time boosted their power numbers. That was something Royer said he’s been asked about, as more information from the “Steroid Era” has come public.

“Those guys were phenoms when it came to hitting the ball hard and far,” Royer said. “Then we came to find out there was something behind it. I was just a naive kid from (Effingham) and Charleston and the Midwest. I didn’t know anything about it.

Back in the Midwest

It’s only fitting Royer made his professional debut in September 1991 for the St. Louis Cardinals. Stanley Dean Royer is, after all, named after two Cardinals greats — Stan Musial and Dizzy Dean.

“It was a dream come true to be able to play close to home,” Royer said. “Then you start thinking about who you’re named after, and it’s pretty sweet. Every kid I think for the most part wants to play as close to home as they can, so friends, family can have the opportunity to come and watch.”

Royer played four seasons with the Cardinals as a corner infielder and pinch hitter before being selected off waivers by the Boston Red Sox after the 1994 All-Star break. He hit .258 for the Cardinals with four home runs, 10 doubles and 20 RBIs in 155 at bats in four seasons.

His time in St. Louis, though, also had him sharing the left side of the infield with future Hall of Fame shortstop Ozzie Smith.

“I learned to just get out of his way and only catch the balls that were right at me,” Royer said with a laugh. “He covered that much ground. Even balls in the hole that you may be able to get, he’s going to make the play better than you’re going to make it.”

The end of a pro career

Royer’s move to Boston came with the promise of plenty of at bats for a left-handed hitter against a lefty-rich American League — even splitting playing time with Scott Cooper and Mo Vaughn.

Those at bats, though, didn’t come.

“A month goes by and I’ve got nine at bats,” Royer said. “I started two games and pinch-hit once, and we’d faced a dozen lefties. The ones I faced were Mark Langston, and my last start that I ever had was against Randy Johnson. Of course (Cooper and Vaughn) didn’t want to face those guys. I didn’t care. I just wanted to play.”

Royer also headed to the East Coast with the player’s strike that cut the 1994 season in half quickly approaching. Shortly before the strike, the Red Sox wanted to send Royer back down to Triple-A. He wanted a guarantee they wouldn’t bring him back to the majors in a week.

Royer wasn’t sold on the move to Triple-A in either case. He said the Red Sox told him the move was to get him more at bats, but the minor league season had a month left of games.

“I had already been in Triple-A,” Royer said. “I’d set records in Triple-A. Why was I going down there? You’re going to evaluate me in Triple-A for a month? None of it really added up. I felt like I was going in the wrong direction. To be honest with you, the game was starting not to be any fun anymore.”

So Royer made the difficult decision with his first child on the way to end his professional baseball career.

“I wasn’t sure what I was going to do, but I wasn’t afraid to leave,” he said. “Do I miss competing? Yeah. Do I miss a lot of the other game? No, and I don’t ever regret making my decision.”

Royer put his economics degree from EIU to good use after the end of his baseball career. He is the co-founder and president of AMD  Financial Services — an investment advisory firm. Even though professional athletes only make up a small percentage of his firm’s business, he’s still involved with the game.

His continued involvement with baseball also includes stops like the one he made in Effingham on Tuesday. They’re moments he can share some of his knowledge with the next generation of baseball players, even if he doesn’t always talk about baseball.

“There’s tons of lessons to learn from playing — life lessons that you can take with you,” Royer said. “Playing with a team and competing are great things no matter if it lasts through little league or lasts through college or if you’re fortunate enough to go on to another level.”