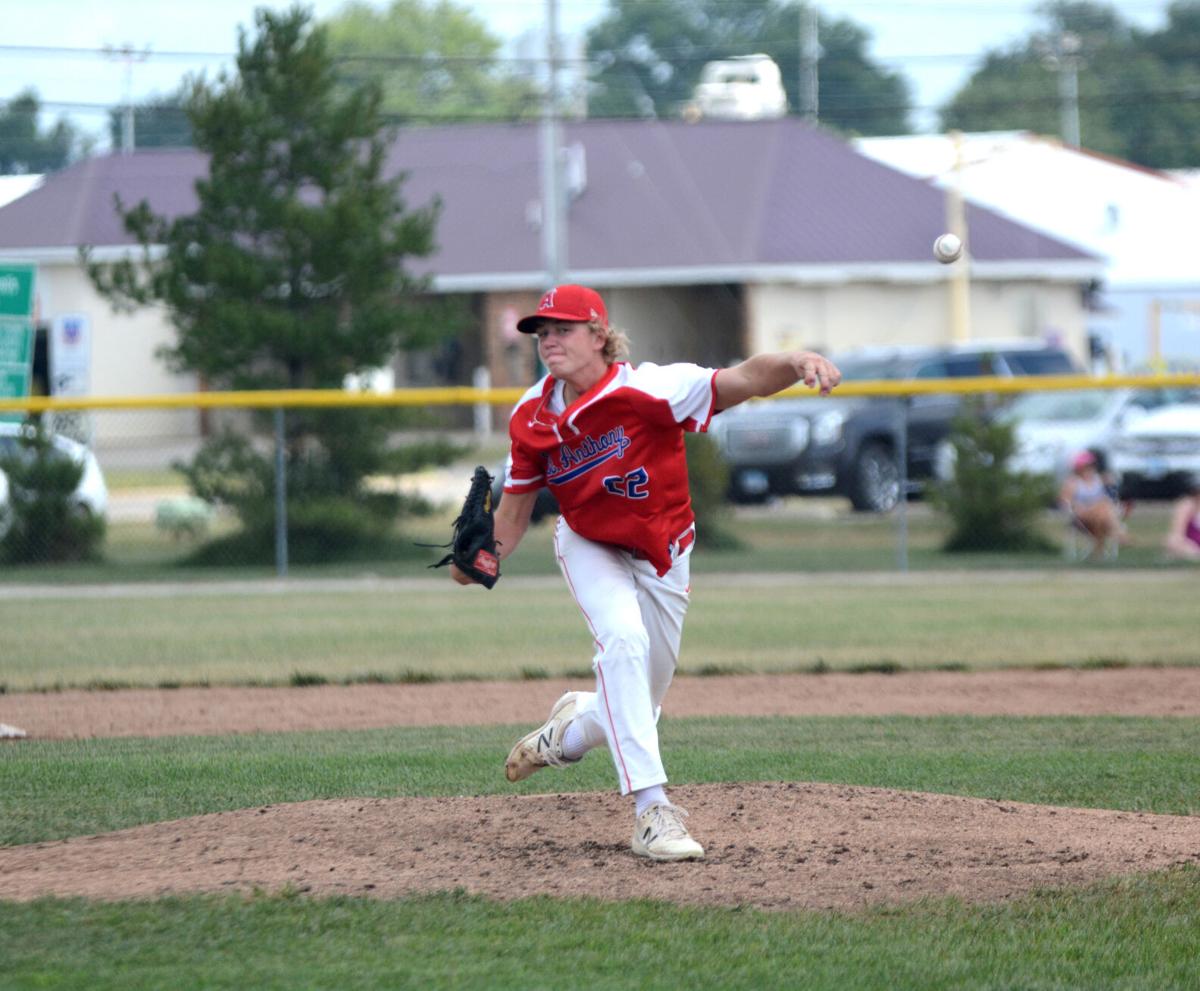 St. Anthony’s Seth Hotze hurls a pitch toward home plate in the team’s loss to Teutopolis Saturday at the 2020 Teutopolis Wooden Bat Classic.

St. Anthony’s Seth Hotze hurls a pitch toward home plate in the team’s loss to Teutopolis Saturday at the 2020 Teutopolis Wooden Bat Classic.

To that point, the Wooden Shoes were unable to muster up any quality opportunities, having just one infield hit going into the bottom of the sixth as Seth Hotze was rolling on the mound for the Bulldogs.

But in the bottom of the sixth, the Wooden Shoes got the inning started with a leadoff single from Sam Bushur, who had 11 RBIs in has past two games entering Saturday’s tournament.

After Dylan Pruemer drew a one-out walk, Derek Konkel singled to left to score Kayden Althoff who had reached on the error and ending the day for Hotze.

Eli Levitt came in for relief of Hotze, but hit the first batter he faced to load the bases for Justin Hardiek, who was also hit by a pitch to score Pruemer and make it 6-4.

Levitt was able to strike out Evan Addis for the second out of the inning before Bushur singled to drive in Luke Koester, running for Konkel to make it a one-run game at 6-5.

“We had guys step up and got hits, we had guys who got hit and had [Bushur] go out there and close the door on them in the seventh,” said Teutopolis head coach Justin Fleener. “I told them to get rallied. The only thing I felt like I did was ask the umpire back for my lucky blue pen, so there’s the superstition I have.

“These boys rallied on their own, they stayed confident and started building it. I told them before that inning started, if he’s giving us that outside part, we’ve got to go with it and stop trying to pull it. The guys bought into that. It wasn’t anything I did, they went out there and performed.”

With the bases loaded and in his first day back in action, Wermert cleared the bases with a double to center scoring Logan Roepke, Hardiek and Bushur to give the Wooden Shoes an 8-6 lead.

“It was a big clutch hit, [Wermert] went with the pitch and that’s what we were looking for there,” said Fleener.

Wermert was able to move up to third on a passed ball and came in to score on an RBI single from Kayden Althoff to make it 9-6 Wooden Shoes, needing just three outs to win after being down 6-0 and being held to one hit entering the bottom of the inning.

“At the end of it you kind of have to go with your gut feeling,” said St. Anthony head coach Tony Kreke. “In the sixth, my gut was telling me to go back out there with Seth. He’s a senior and wants the ball. You have to play one pitch at a time and I feel like our lack of experience kind of showed up there. We have to go through the experience of learning.

“I’ll put Eli Levitt back out in that situation again. He’s a warrior, a bulldog, whatever you want to call it. He’s going to get that opportunity again.”

Bushur came back out for the seventh and despite allowing a 1-out walk followed by a single to Logan Antrim, was able to get the next two outs without surrendering a run to help earn the win.

Similar to the Bulldogs’ 12-11 win over the Wooden Shoes just days before, the Bulldogs had plated five runs in the third inning.

Connor Roepke got it started with a 2-out single followed by a walk to Kennan Walsh.

Brody Niebrugge came to the plate Antrim and Moore in scoring position and came up big with a double to plate them both. A RBI single from Colton Fearday was deep enough to score Niebrugge for the fifth run of the inning to take a 5-0 lead.

The Bulldogs got their sixth run of the day after Walsh led off the inning with a walk and was able to get to third base after stealing second and getting to third on a balk. A sacrifice fly to right from Moore was deep enough to score Walsh to go up 6-0.

Pruemer and Konkel reached via 1-out walks, followed by a single to Wermert loaded the bases.

Will Hoene grounded into a fielder’s choice, as the Cardinals looked for a double play to get them out of trouble and earn the win, but the throw to first was not in time, allowing the Wooden Shoes to score Pruemer and Konkel to win 2-1.

In the other 9 a.m. game at Paul Smith Field, the Bulldogs defeated Dieterich 14-5, using 4-run innings in the first and third, as well as a 6-run inning in the sixth.

The Movin’ Maroons kept pace early. They fell behind 4-2 after one inning, but plated two in the second to tie the game at four, but just couldn’t keep pace with the big innings of the Bulldogs.

Levitt was the star of the game, going 3-for-4 while driving in four and scoring three times. Moore drove in three, while Antrim and Josh Blanchette each drove in two. Eli Link and Niebrugge each drove in one.

Noah Dill drove in two runs for the Movin’ Maroons with a triple. Pete Britton, Jack Westendorf and Garrett Niebrugge each drove in one.

Blanchette earned the win for the Bulldogs, allowing three earned runs on four hits while striking out three and walking four.

The Movin’ Maroons fell to North Clay 3-2 in extra innings.

North Clay scored a run in the bottom of the first and it remained that way until the top of the sixth when Dalton Will was able to score on a fielder’s choice to tie the game.

In the top of the eighth, Austin Ruholl got aboard via 1-out single but was thrown out at second after Pete Britton hit into a fielder’s choice. A single from Dill moved Britton up to second and was able to advance to third base on the throw.

A 2-out single from Garrett Niebrugge scored Britton to take a 2-1 lead heading into the bottom of the eighth.

Holden Dawkins led off the bottom of the inning with a walk for the Cardinals, but was thrown out in a fielder’s choice advancing to second.

Dakota Teague drew a 2-out walk to put the go-ahead run on base for the Cardinals.

Collyn Ballard singled to center to score Teague and Dakota Weidner after Weidner reached on fielder’s choice to walk it off for the Cardinals and win 3-2.