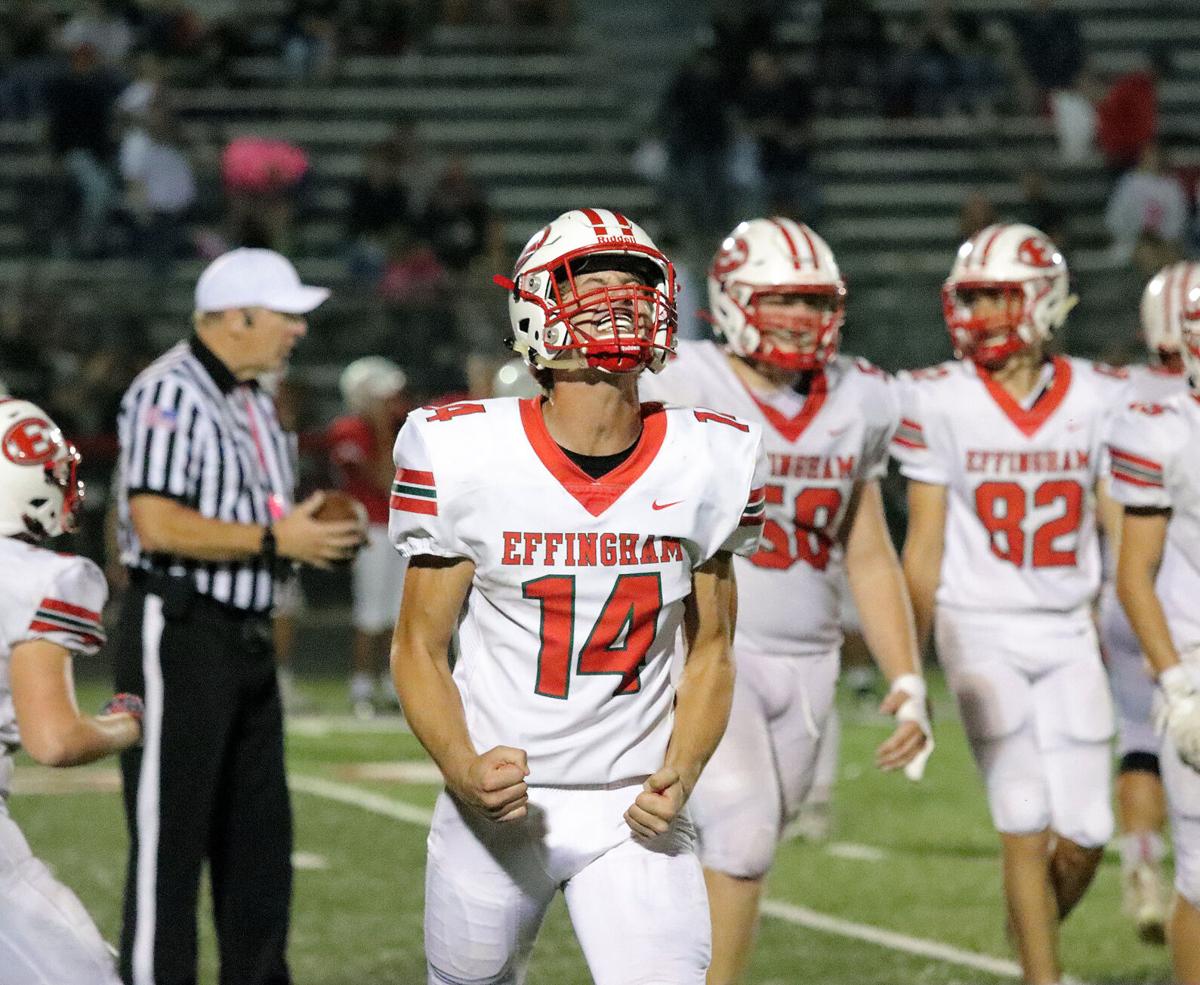 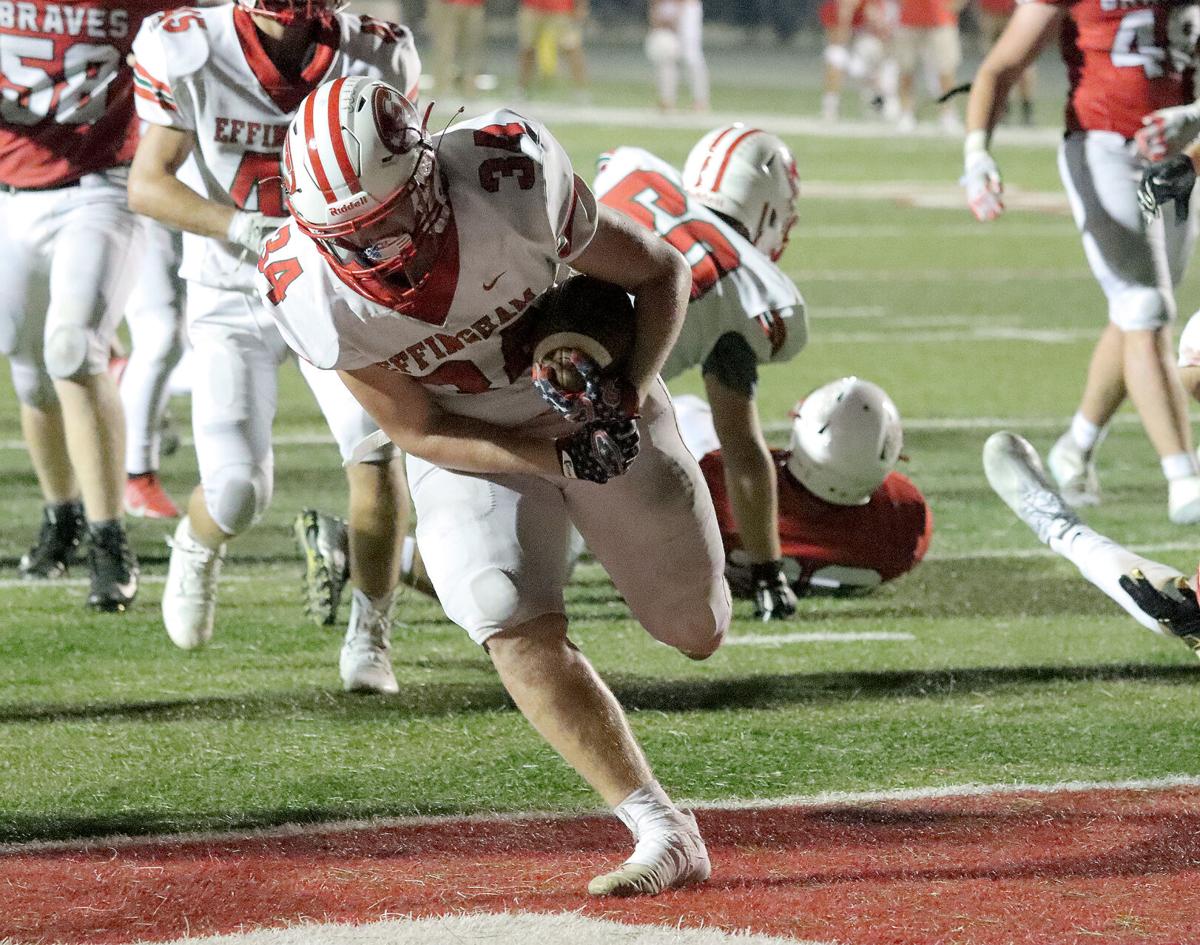 Many probably didn't believe that an inexperienced Effingham football team stood a chance against a state-ranked Mt. Zion squad on Friday night.

As soon as the fourth quarter ended and the clock showed all zeros, though, all those doubts went away.

The Flaming Hearts jubilantly ran off the field, not one player without a smile on their face. They just completed a 28-27 upset victory over the 10th-ranked team in Class 4A, improving their record to 3-3 and 3-2 within the Apollo Conference.

It wasn't just an upset win, however. It was also the first time the Braves had lost a home game since the 2018 season when they fell to Mattoon -- also by one point -- 15-14.

Junior John Westendorf had his second-straight 100-plus yard rushing game to pace the offense. He had 143 rushing yards on 31 carries and scored all four of the Hearts' touchdowns.

"He's gotten better each week, and Keegan [Blake] did a good job tonight to hang onto the ball and run it," Hefner said. John has a good feel for it. He has a strong lower half and a good tempo to him."

Westendorf scored from 14 yards out, three yards out, and two times from eight yards out.

Yet, even though the bulldozing junior gets a lot of the headlines, one area that Hefner is pleased with is in the trenches. An area which Hefner even believes Westendorf would praise before himself.

It wasn't only the offense that stood out, though.

Despite allowing 27 points, Effingham made two of the most crucial defensive stops toward the end of the game that preserved the victory.

With 8:07 remaining, sophomore quarterback Tyson Evans found junior Chiren Petty down the far side of the field, his eyes glued to the end zone.

Petty, who beat his man initially, wouldn't make it to paydirt, though. Racing behind him was sophomore Max Nelson, who stripped the ball from his hands, allowing junior Connor Simmons to scoop up the loose football and give the Flaming Hearts possession with no damage done.

"Hustle It's everything that they hope they do that's allowed us to have success in this program," Hefner said. "They keep playing. They don't take plays off. He's beat, he can give up, but instead, he fights like crazy, makes the tackle, gets the strip, and we get the pick-up. I think it shows how far they've come, and I think it's about what we've established and what these guys believe."

The ensuing Effingham drive, though, didn't go as planned, as the Braves forced the Hearts to punt after junior wide receiver Evan Waymouth had a pass from junior quarterback Tanner Pontious narrowly escape his reach.

Leading by one point, the game came down to -- what would be -- Mt. Zion's final drive.

The Braves pushed the ball down to the six-yard line, with the worst yet to come, as the Flaming Hearts' defense forced them to kick a field goal.

Jogging onto the field, junior Brayden Traxler only had one goal in mind. Make a 23-yard field goal to give his team the lead.

As soon as the ball left Traxler's foot, though, he wouldn't like the result. His attempt went off the left upright and down. Another scare thwarted as Effingham managed to escape, still leading by one.

"It's a game of inches, and everybody's fighting for that inch," Hefner said. "You saw it there. Luckily, tonight, a few of those inches went our way, and we came out with a win."

The Flaming Hearts will look to make it three in a row on Friday against Lincoln. The game will also be Effingham's Homecoming.