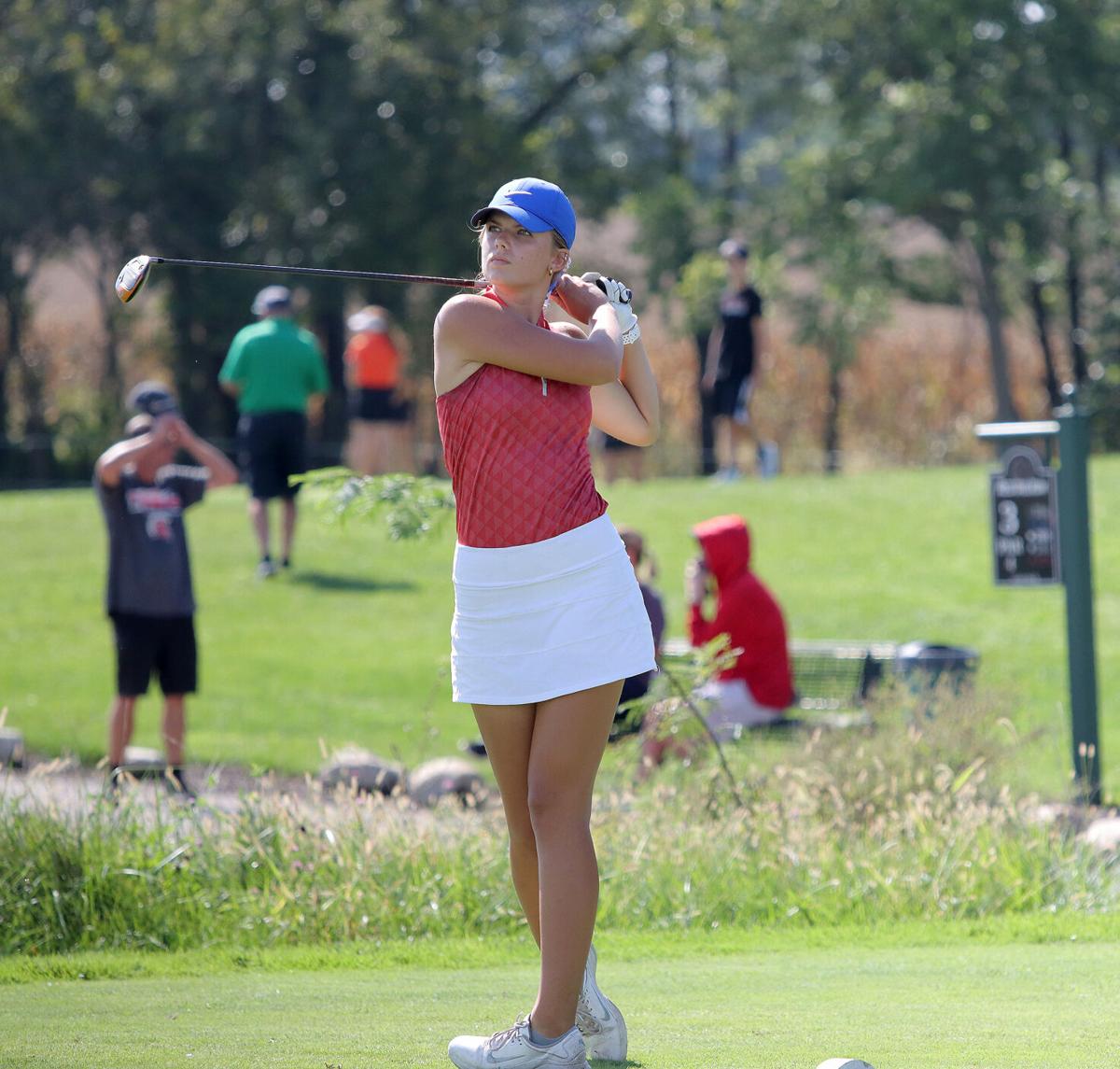 St. Anthony’s Ellie Wegman follows through with her swing at Class 1A State at Red Tail Run Golf Course in Decatur, Illinois, on Friday, October 8, 2021. 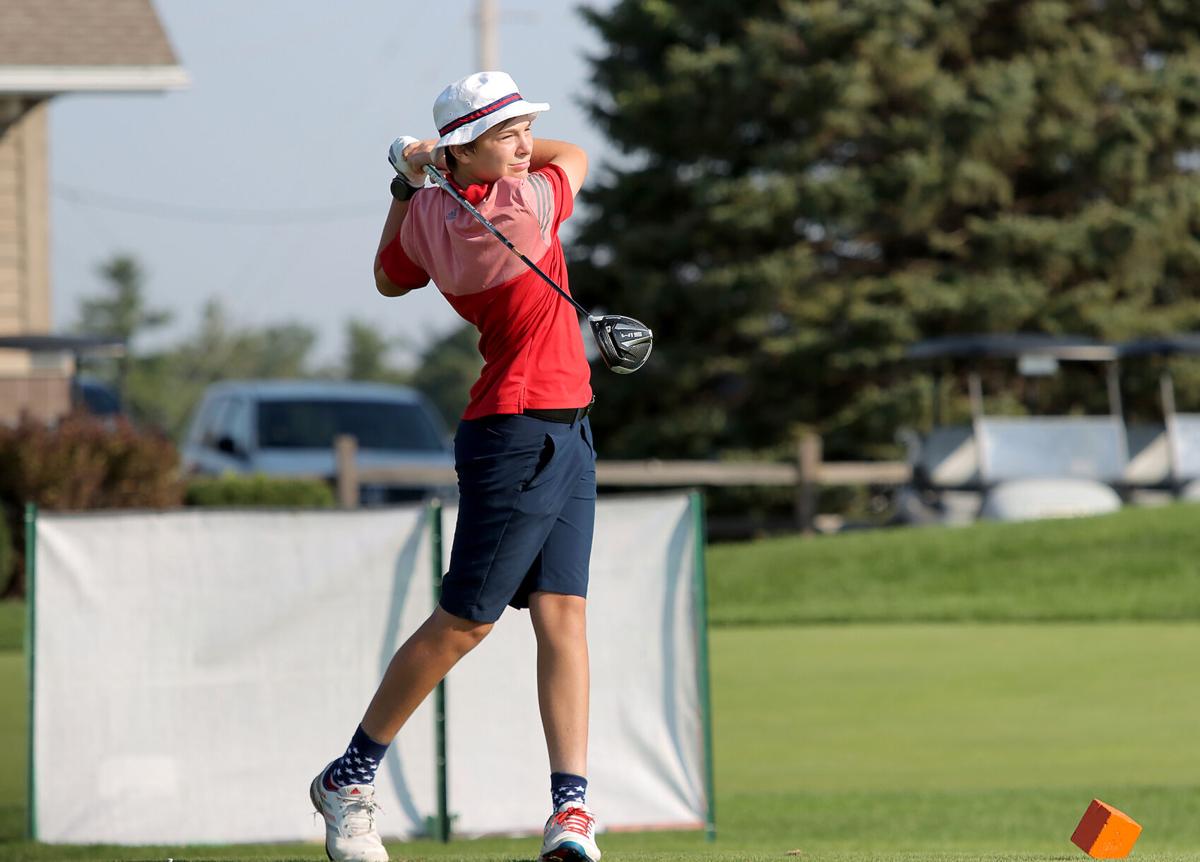 St. Anthony’s Dakota Flaig follows through with his swing at Class 1A State at Prairie Vista Golf Course in Bloomington, Illinois, on Saturday, October 9, 2021.

St. Anthony’s Ellie Wegman follows through with her swing at Class 1A State at Red Tail Run Golf Course in Decatur, Illinois, on Friday, October 8, 2021.

St. Anthony’s Dakota Flaig follows through with his swing at Class 1A State at Prairie Vista Golf Course in Bloomington, Illinois, on Saturday, October 9, 2021.

What a difference one day makes.

After Day 1 of Class 1A State saw the St. Anthony girls golf team finish in seventh place after carding a 346, the Bulldogs rebounded in Day 2 to place third and bring home hardware.

St. Anthony shot the second-best score on the second day of the tournament with a 313.

Senior Ellie Wegman showed off her resiliency with a two-over-par 74 on Day 2 after shooting a 95 on the first day.

Wegman shot an even-par 36 on the back — where she and her teammates teed off to begin the day — and a two-over-par 38 on the front. She carded the 10th-best score out of all individuals on Day 2.

As for her teammates, junior Lauren Schwing was three shots better on Saturday, shooting a 75. She shot a two-over-par 38 on the front and a one-over-par 37 on the back.

Schwing birdied the par-3 fifth hole and the par-5 14th hole to finish in 15th place.

Freshman Addie Krouse carded her second-straight 77. She shot a four-over-par 40 on the front and a one-over-par 37 on the back to finish in 17th place.

Lastly, senior Nina Hakman was nine shots better on Day 2, with an 87. She shot a nine-over-par 45 on the front and a six-over-par 42 on the back.

Mt. Carmel shot the best score on Day 2 with a 302 and won the Class 1A state championship with a two-day score of 604. The Golden Aces captured the program's first state title, as well.

Sitting eight shots back of the lead on Friday, a fifth-state championship was well within reach for the St. Anthony boys golf team heading into Day 2 of the Class 1A state tournament.

What head coach Phil Zaccari needed his team to do to make that happen, though, didn't, as the Bulldogs settled for fourth place.

"The biggest thing was making pars, and we didn't," Zaccari said. "We didn't get up and down. We missed too many short putts that were either for par or anything inside five feet. But the thing about these greens is that if you haven't played them a lot, it takes a little while to learn them. We did OK, but it's something that we needed to work on, but that's what we talked about — finishing the holes."

St. Anthony fired a 316 on Day 2, six shots behind what they shot on the first day, guided by freshman Dakota Flaig, who finished 21st among individuals.

Flaig shot a five-over-par 77. He carded a two-over-par 38 on the front and a three-over-par 39 on the back, birding the par-5 fourth and par-4 17th holes, while fellow freshman Joey Trupiano — the Bulldogs leader in the clubhouse after Day 1 — struggled on his second go-around, shooting an 85.

Yet, even with Trupiano struggling on the second day, Zaccari still couldn't be happier with how bright the program's future is moving forward.

"They've had a history," said Zaccari of his freshmen. "They've been players, and they've done well in junior golf and on the prep tour and stuff like that, but this is a little different atmosphere, and they stepped up. It's something that they will build on for next year. Sometimes they say, 'A child will lead them,' and our freshmen stepped up the first couple of days."

As for how the rest of the team fared, sophomore Lane Ludwig carded his second round of 79 on Saturday, while senior Thomas Chojnicki ended his Bulldogs career with an 81, and junior Jonathan Willenborg shot a 79.

Chojnicki, the only St. Anthony player to have seen Prairie Vista beforehand, shot a three-over-par 39 on the back with a birdie on the par-5 16th hole.

"The weather was a lot better than it was four years ago," said Chojnicki of his second appearance at the course. "It was about 30 degrees warmer, and I think that helped make scores lower, but we needed to play better. I played OK the first day, and it was just a grind today. My ball-striking wasn't great, but I still shot around 80, so not terrible."

Meanwhile, Willenborg, who shot an 80 on Day 1, was one shot better on Day 2 with a 79. He carded three birdies, too.

Vandalia won Class 1A State with a 616, one shot better than North Shore Country Day and two shots better than IC Catholic. The win was the first state title for the Vandals' golf program.