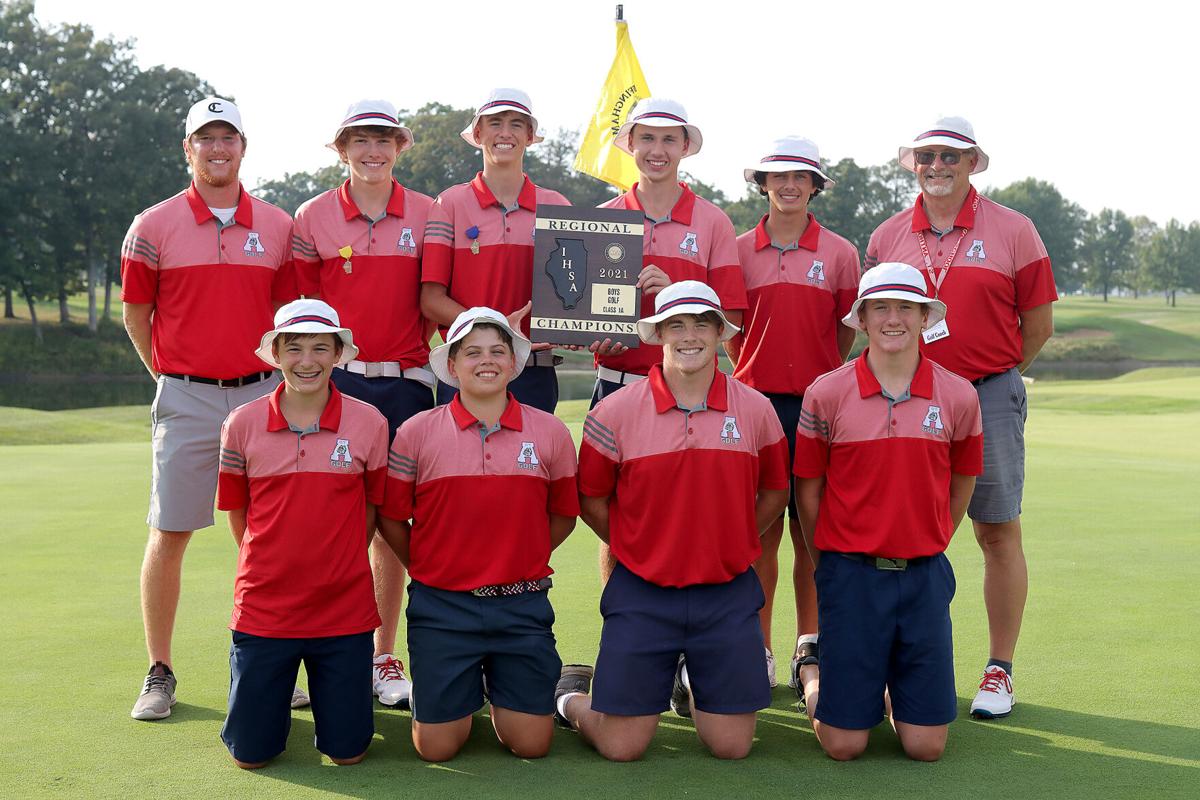 The St. Anthony boys golf team poses for a picture after winning the Class 1A Regional championship at Effingham Country Club on Wednesday, September 29, 2021. 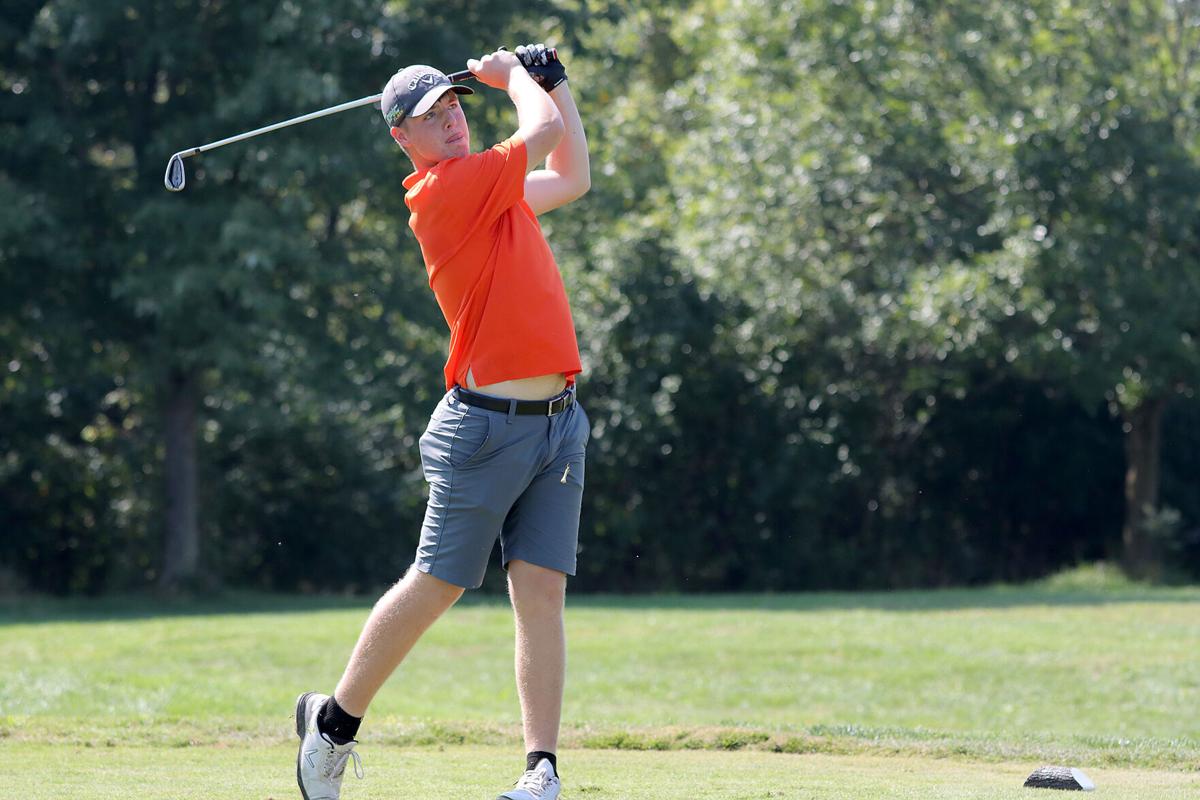 Altamont’s Kevin Hall follows through with a swing during the Class 1A Regional at Effingham Country Club on Wednesday, September 29, 2021.

The St. Anthony boys golf team poses for a picture after winning the Class 1A Regional championship at Effingham Country Club on Wednesday, September 29, 2021.

Altamont’s Kevin Hall follows through with a swing during the Class 1A Regional at Effingham Country Club on Wednesday, September 29, 2021.

There is always room for one more trophy to display.

St. Anthony finished with a team score of 297, 18 strokes ahead of the team finishing second.

Junior Jonathan Willenborg was the low individual for the tournament, carding a two-under-par 70.

“It was all about getting off to a strong start,” said Willenborg on what he needed to do before his round. “We played a practice round yesterday, and I was visualizing where I would put each ball and try to keep hitting greens. I was able to execute through the first few holes, birdied No. 5, 6, 7 all in a row, and just kept it going.”

Willenborg’s under-par round was also his career-low for a tournament.

“It was a blast. I was trying to stay away from the double-bogeys,” Willenborg said. “I never made one, and I dropped a few birdies to get me down to two-under-par.”

However, he wasn’t alone. Three other Bulldogs also carded rounds in the 70s.

Senior Thomas Chojnicki shot a three-over-par round of 75. He shot one-under-par on the front nine before carding a 40 on the back nine.

“I started with two birdies on my first three holes,” Chojnicki said. “I made a long putt on No. 3 that kept the momentum going, and I just kept that going throughout the front nine. I missed a couple of short ones near the end, but it was a pretty good round.”

Freshman Dakota Flaig finished with a three-over-par round of 76, highlighted by sinking an eagle putt on the 18th hole.

“I started pretty well on the front, and I was riding the momentum of par,” Flaig said. “Then, I made a couple of bogeys, but it didn’t hurt me that much.”

The final St. Anthony golfer to come in with a score in the 70s was sophomore Lane Ludwig.

Ludwig also carded a three-over-par round of 76. He shot a 36 on the front — with birdies on the fourth and seventh holes — and a 40 on the back.

“I thought on the front nine that my mindset was good,” Ludwig said. “It’s been a lot better my last couple of rounds. I tried to carry it over on the back, but I couldn’t do it, but I still had a good round. My irons were on, my driver was on, and I hit a very big hook with my woods, but it worked for a couple of holes. I had a couple of three-putts, but I putted alright; I hit 12 greens.”

As for the other two individuals competing, sophomore Charlie Wegman shot an 80, while freshman Joey Trupiano shot an 81.

Coming in second place was Oblong with a 315.

The final sectional-qualifying team was Altamont, who finished with a 339, one shot ahead of Mt. Carmel.

Kevin Hall was the low individual on the team with a 77.

“I just tried to focus on hitting fairways,” said Hall of his round. “My putting wasn’t great, but I probably could have shot closer to even if I putted a little bit better, but I’m not overly mad about it. It was a pretty solid round.”

Junior Avery Jarhaus finished second with a 79. Senior Tyler Stonecipher was third with an 82, and junior Max Runge was fourth with a 101.

The other two scores that didn’t count toward the team total were senior A.J. Kopplin’s 105 and junior Zeke Rippetoe’s 108.

“It’s wonderful for these kids,” said Altamont head coach Jim Strange on his team advancing to sectionals. “It’s a new experience, and it’s unique. I’ve had two of them go as individuals before, but never as a team. We have six kids going, and they love it.”

Meanwhile, for other local teams, Teutopolis finished sixth with a 370.

Sophomore Hayden Jansen earned a spot in the sectional round with a round of 88, while junior Adam Lustig shot a 93, freshman Brody Thoele a 94, and senior Peyton Tegeler a 95.

The other two scores outside the top four were Ethan Thoele’s 96 and Bennet Thompson’s 97.

“The good thing is all of my kids are mad about what they shot today,” Wooden Shoes’ head coach Mike Wilson said. “Everybody was under 100. We’re a work in progress, and now we start all over again. Now, we need to show that improvement and get to the next step.”

Newton and North Clay also competed, with the Eagles finishing 11th and the Cardinals finishing 12th.

The Class 1A Sectional is at Green Hills in Mt. Vernon on Monday.