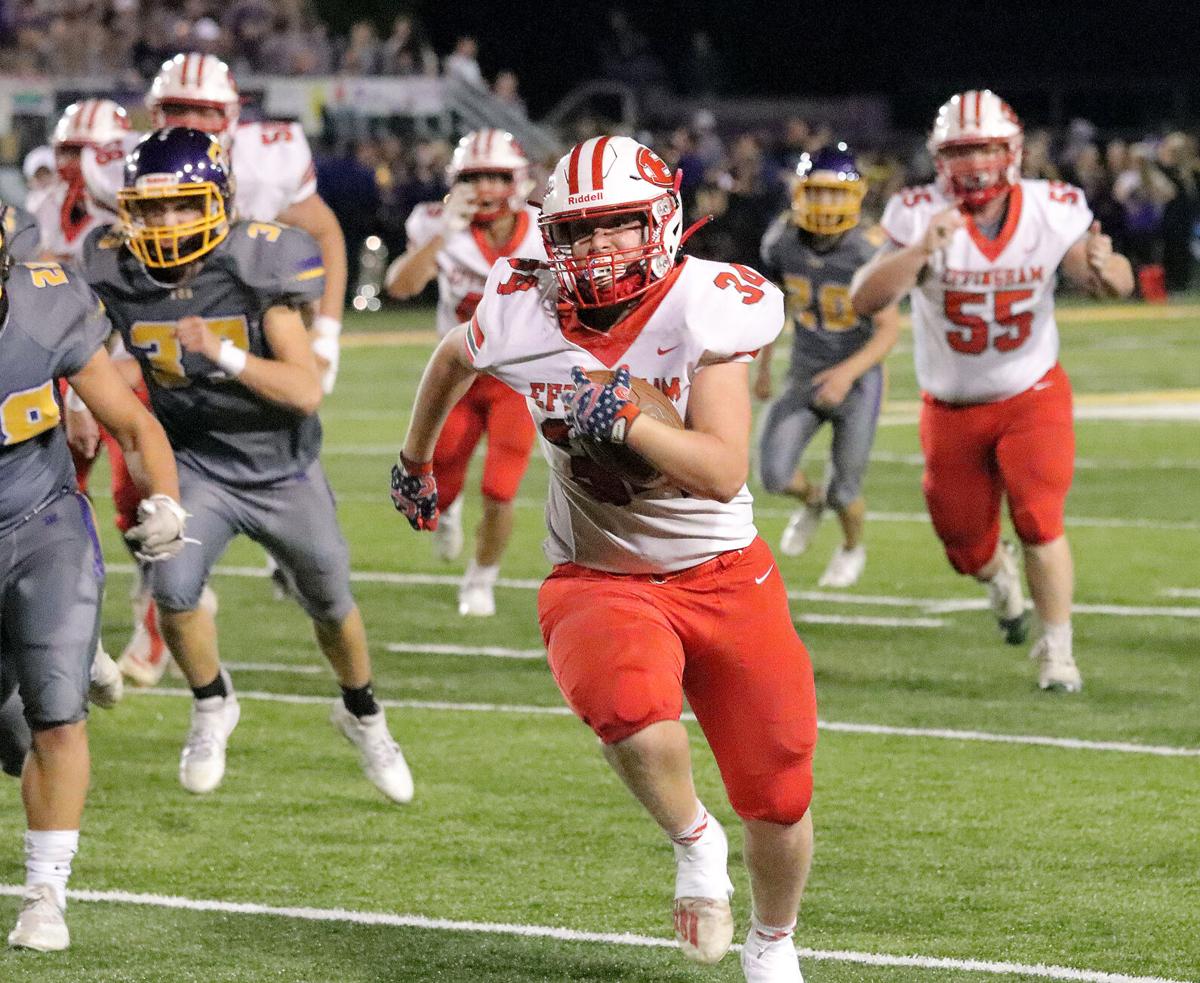 Effingham’s John Westendorf runs with the ball during a football game against Taylorville, Friday, September 24, 2021, at Taylorville High School. 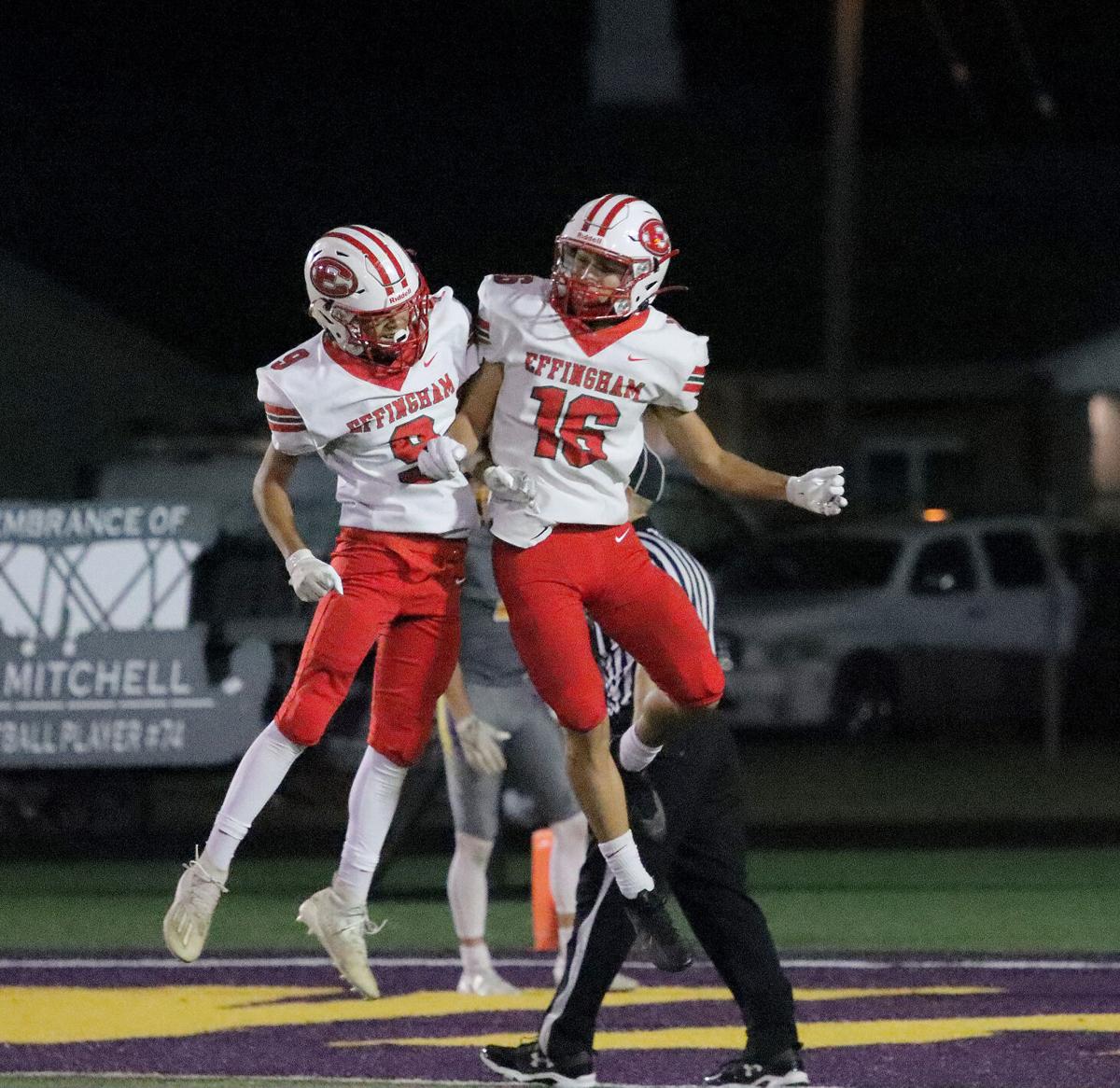 Effingham’s Caden Walls (9) and Armando Estrada (16) leap in the air after a touchdown during a football game against Taylorville, Friday, September 24, 2021, at Taylorville High School.

Effingham’s John Westendorf runs with the ball during a football game against Taylorville, Friday, September 24, 2021, at Taylorville High School.

Effingham’s Caden Walls (9) and Armando Estrada (16) leap in the air after a touchdown during a football game against Taylorville, Friday, September 24, 2021, at Taylorville High School.

In two of its three road games this year, Effingham has played nearly flawless football.

The Flaming Hearts pitched a shutout in Week 3 against Charleston and did nearly the same thing against Taylorville (2-3, 0-3 Apollo Conference) Friday night with a 27-7 victory.

Behind a bulldozing running game, a pair of touchdowns from junior quarterback Tanner Pontious, and a stout defensive showing, Effingham (2-3, 2-2 Apollo Conference) managed to steal another road win.

Altogether, the Flaming Hearts rushed for 278 yards, led by junior John Westendorf, who picked up 148 yards on the ground with two touchdowns.

Yet, even with Effingham seemingly controlling the entirety of the game, head coach Brett Hefner's group jogged off the field only to find themselves ahead by six points. The lone score came on a four-yard run from Westendorf with 11:54 left in the second quarter.

"That was the frustrating thing," Hefner said. "You felt like you controlled everything, and you felt like you had everything in hand, but you look up, and they're one play away from being in the lead. That's a little unsettling. We knew we had the ball to start the half, so we knew that was going to be important."

Running the ball predominantly throughout the first half, the Flaming Hearts never showed the Tornadoes what they were capable of in the passing game.

Knowing that he needed to open the playbook more, Hefner did just that with 10:26 left in the third quarter, as Pontious connected with junior wide receiver Armando Estrada on a 59-yard touchdown to make it 13-0. A big play that Effingham needed.

"We knew we were going to have to take a shot," Hefner said. "You get a night like this where the wind is downfield, and it's a little easier to take shots than it is into the wind."

Pontious ended his night throwing for 123 yards. He added a 27-yard touchdown pass to junior Evan Waymoth late in the third, as well.

The shine wasn't only on offense, though.

Defensively, the Flaming Hearts allowed 96 rushing yards and 100 passing yards. They had four tackles for loss and three sacks, too.

"They played well; struggled a little bit early," Hefner said. "[Jeb Odam] does a great job with those guys offensively. We knew we would see something that we hadn't seen, and we saw it with the option stuff. We're not big upfront, and I thought we hung in there and adjusted."

Taylorville's only score came after a two-play drive, as junior Seth Hughes gained 40 yards after an end-around play and senior Jaden Mathon caught a 35-yard pass from senior Kamren Heimsness that equaled the final score.