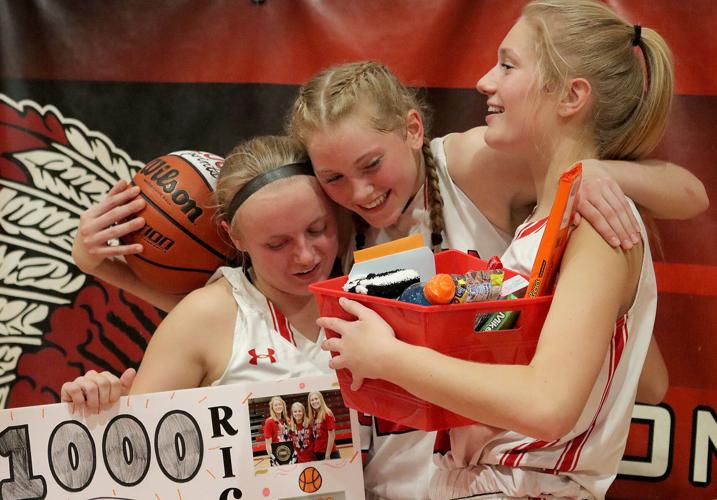 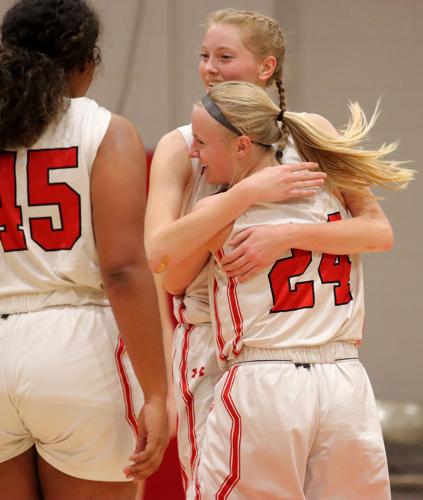 In the history of the Neoga girls’ basketball program, only 16 individuals can call themselves a member of the 1,000-point club.

Senior Sydney Richards is that 16th member, accomplishing the feat Monday night during a non-conference contest against Moweaqua Central A&M.

“It doesn’t come around as often as we would like, so it’s quite an honor for ‘Syd’ and the team,” Neoga head coach Kim Romack said. “It takes everybody to make that happen.”

Richards scored her points with two minutes to go in the second quarter, followed by fellow senior Allison Worman and junior Haylee Campbell celebrating the basket as they were running down to the opposite end of the floor while a raucous fan section applauded.

“I just hoped that it was going in,” Richards said. “I just threw it up there; it was a bad idea, and I probably shouldn’t have done that, but it went in, so I’m good with that.”

Neoga athletics director Mike Taylor then proceeded to announce the milestone to the crowd following the next dead ball before Richards hugged her teammates, received a commemorative ball from Romack, and then hugged her sister Brynn, who was on the bench.

“It was super great and fun to watch,” Brynn said. “I’m super proud of her.”

“It’s amazing,” fellow senior and point guard Sydney Hakman added. “She deserves every second of it. She’s a great team player, so it’s not like she goes up there and shoots it for herself; she does it for the team.”

Sydney said that she found out about the milestone after the final basketball game of her junior year.

The ever-humble and shy player won’t take the credit for the club she joined, though.

Sydney finished Monday’s contest with a team-best 18 points, leading her team to a 13-point victory.

After the game, Sydney received gifts from friends while her family and friends celebrated with her.

“She’s been blessed to have the teammates she’s had each year,” Sydney’s mother, Jackie, said. “They’re all so dedicated to each other; they’re like a family.”

Though Sydney’s friends and family are important to her, she knows that none of this would be possible if it weren’t for the dedication and hard work that she put in, either.

Sydney’s father, Tony, knows that all too well.

“She’s a very dedicated individual, and she has an excellent work ethic, and she’s very determined,” Tony said. “When she sets her mind to something, she will accomplish it. It was good tonight to see her go out and get her 1,000th point, and it looks like she had fun doing it.”

Romack also knows that all too well, too. She has been around since the beginning of Richards’ journey and knows how hard she has worked to get to this level.

“We saw the potential, but she was — and always has been — a quiet kid,” Romack said. “She just came in and did a good job, and her leadership took over. In the last two years, she’s stepped up and stepped into her own. She’s confident when on the floor, but it’s been fun to watch her grow from junior high to her senior year.”