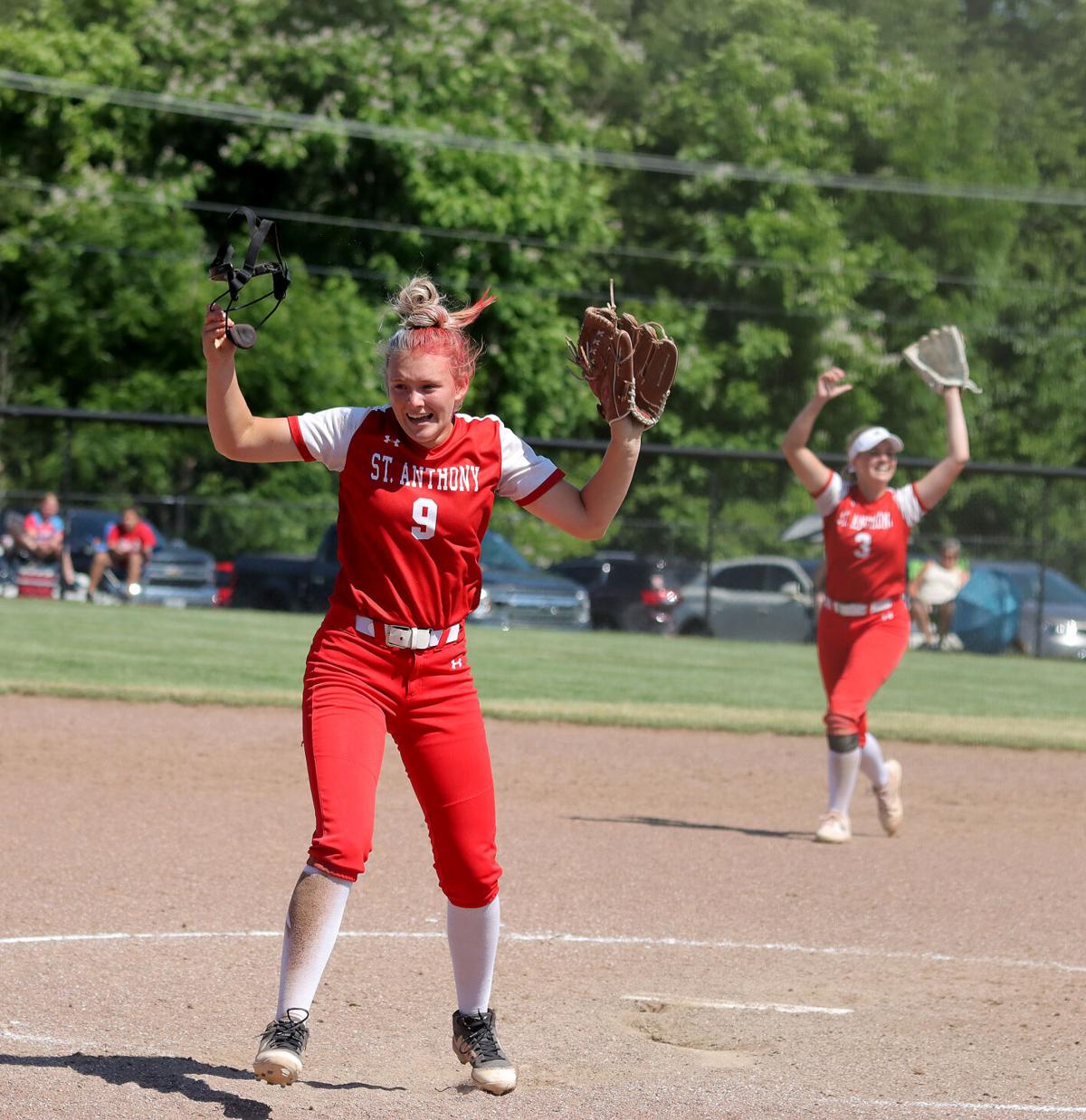 St. Anthony’s Lucy Fearday smiles after the final out during a softball game against Marissa (Coulterville) in the Class 1A Super-Sectionals, Monday, June 14, 2021, at Johnston City High School, in Johnston City, Illinois. 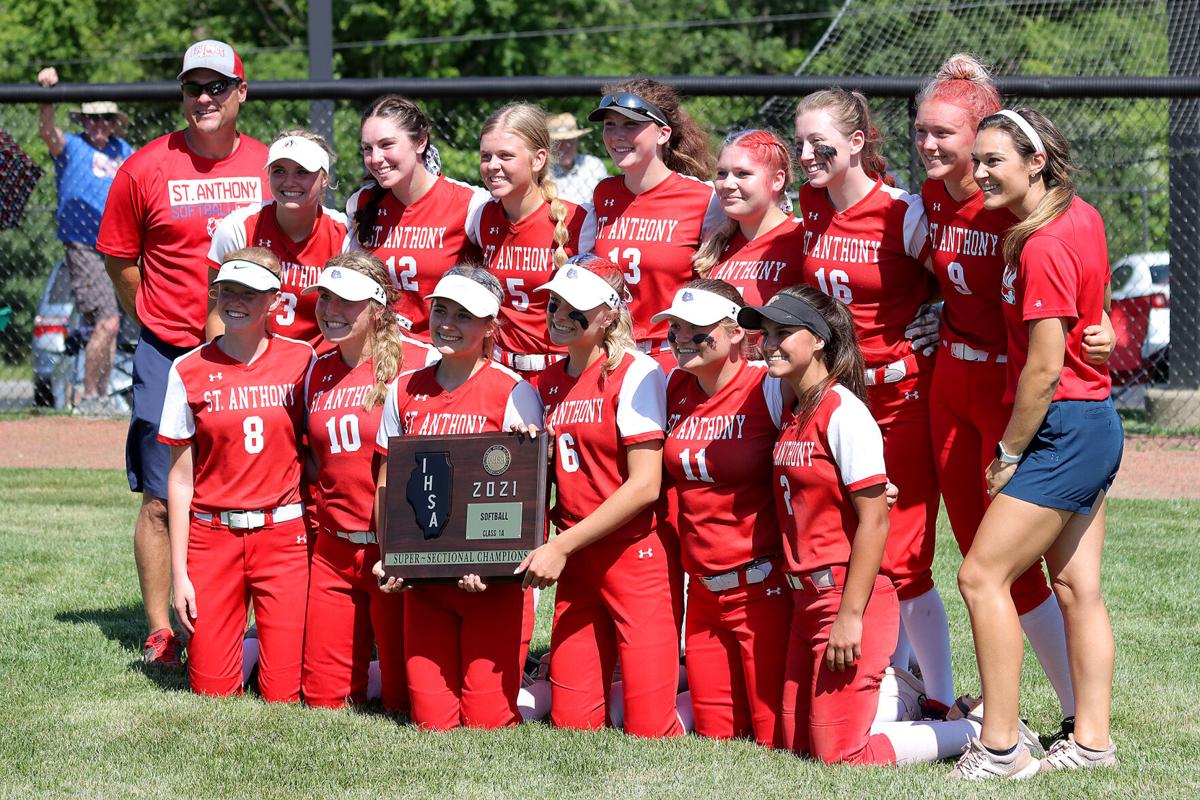 The St. Anthony softball team poses for a picture with the super-sectional plaque after winning the Class 1A Super-Sectionals against Marissa (Coulterville), Monday, June 14, 2021, at Johnston City High School, in Johnston City, Illinois.

St. Anthony’s Lucy Fearday smiles after the final out during a softball game against Marissa (Coulterville) in the Class 1A Super-Sectionals, Monday, June 14, 2021, at Johnston City High School, in Johnston City, Illinois.

The St. Anthony softball team poses for a picture with the super-sectional plaque after winning the Class 1A Super-Sectionals against Marissa (Coulterville), Monday, June 14, 2021, at Johnston City High School, in Johnston City, Illinois.

No matter the opponent, the St. Anthony softball team continues to show a fearless demeanor.

Heading into Monday’s contest against Marissa (Coulterville), the Bulldogs knew they were one win away from a state tournament appearance. In St. Anthony’s way, though, was a Lady Meteors’ team with an unblemished record, once that lasted 16 games — until Monday afternoon.

Behind another strong pitching performance from Lucy Fearday and timely hitting, the Bulldogs downed Marissa (Coulterville) 4-1 to win the Class 1A super-sectional and advance to the state semifinals.

“We set the goals out, and I think that’s what it is. It’s all about wanting to get to state at the end of the season,” St. Anthony head coach Makayla Walsh said. “These girls have personal goals, and they’re attaining them throughout the entire season. The motive for us the entire season has been one pitch at a time, one inning at a time, and one day at a time. They’re staying calm and collected right now, and that’s what they should be doing.”

With three days of preparation and rest, the Bulldogs came out and attacked first.

After a pair of scoreless innings to start the game, St. Anthony only needed one swing of the bat to take the early lead.

As Rios was rounding the bases, Walsh didn’t hold up any stop signs, allowing the speedy sophomore to round third. She then beat the throw home for an inside-the-park home run — the second in the last three games.

“She was throwing inside to me. I don’t know if she was trying to jam me or something.” Rios said. “So, I knew at that point that I needed to power hit it, power slap it, and find a way to get on.”

Marissa (Coulterville), however, didn’t let one run affect them, as the Lady Meteors responded in the top of the fourth to tie the game.

Autumn Gilley started the frame with a single. Then, after a sacrifice bunt from Lainey Canning that pushed Gilley into scoring position, Emily Smith brought her home rather quickly.

Smith slapped a single into right field on the second pitch she saw to tie the game before Fearday struck out Middendorf and Emily Thornton to retire the side.

All signs were pointing toward extra innings after a scoreless fourth frame, but in the home half of the fifth, St. Anthony made sure not to let that happen.

Entering her second plate appearance of the game, nine-hole hitter Alexis Stephens dug in hitless in her last six trips.

Seven turned out to be Stephens’ lucky number, though, as she laced the first pitch from Middendorf for a double, giving the Bulldogs the eventual game-winning score.

Heading into the at-bat, Stephens said that she knew what she wanted and was licking her chops once Middendorf gave it to her.

“I went up knowing that she was pitching me high, and I like high pitches,” Stephens said. “So, I knew that if I got one down the middle, I would crank it. So, I saw it come down the middle, and I cranked it. I didn’t think about it, but that shifted the momentum. I talked about it before we came in; the team with the most momentum would win, and we showed that today.”

Stephens screamed and clapped as she stood on second and faced the Bulldogs’ dugout. She had just given St. Anthony the big hit that they needed.

After a dramatic sixth inning, the Bulldogs then plated two more insurance runs in the top of the seventh to make the final score.

Addie Wernsing and Haley Niebrugge started the frame with back-to-back singles, while Fearday laid down a successful sacrifice bunt to push both runners into scoring position.

Wernsing then scored, after Maddie Kibler tried to bunt her way on, as she beat the throw from Middendorf, while Grace Karolewicz worked a bases-loaded walk to score Maddie Kibler later in the frame.

Fearday then worked a near-perfect seventh frame, as she induced a pair of groundouts to start the inning before Claire Baker reached on a base-hit.

Grace Zimmer then followed that up by hitting a grounder to Rios for the final out of the inning, leading to Fearday and Sydney Kibler smiling and hugging. They had just achieved more school history.

“It is insane. It feels unreal,” Rios said.

In her first season as the head coach of her alma mater, Walsh never thought it would include this moment.

All bets were off, especially after a 2020 season that Walsh’s Bulldogs didn’t have, but she said that she couldn’t take all of the credit for her team’s success.

“I didn’t know what to expect going into this, but this has been a fun ride, Walsh said. “All of the coaches that I’ve had — my dad has been an awesome assistant — so a huge part of these wins is him too. You got to give credit to your assistant coaches.”

St. Anthony plays Arthur-Lovington (Atwood-Hammond) on Wednesday at 10 a.m. at the Louisville Slugger Sports Complex in Peoria. The winner of that game plays for the state championship at 2 p.m., while the loser plays at 1:30 p.m. for third place.