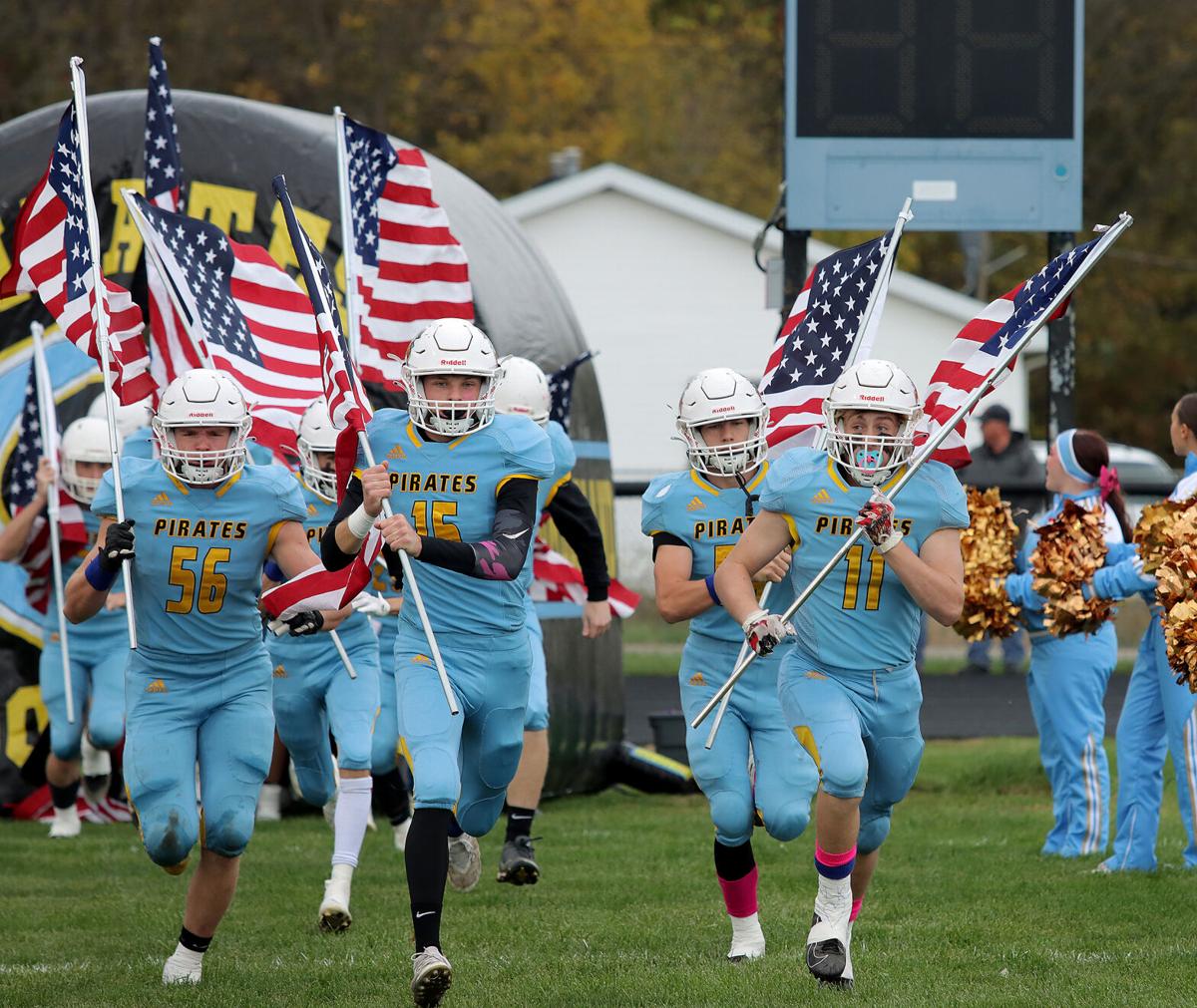 Members of the Cumberland football team take the field before a first-round game against Mt. Sterling (Brown County) Saturday, October 30, 2021, at Pirate Field. 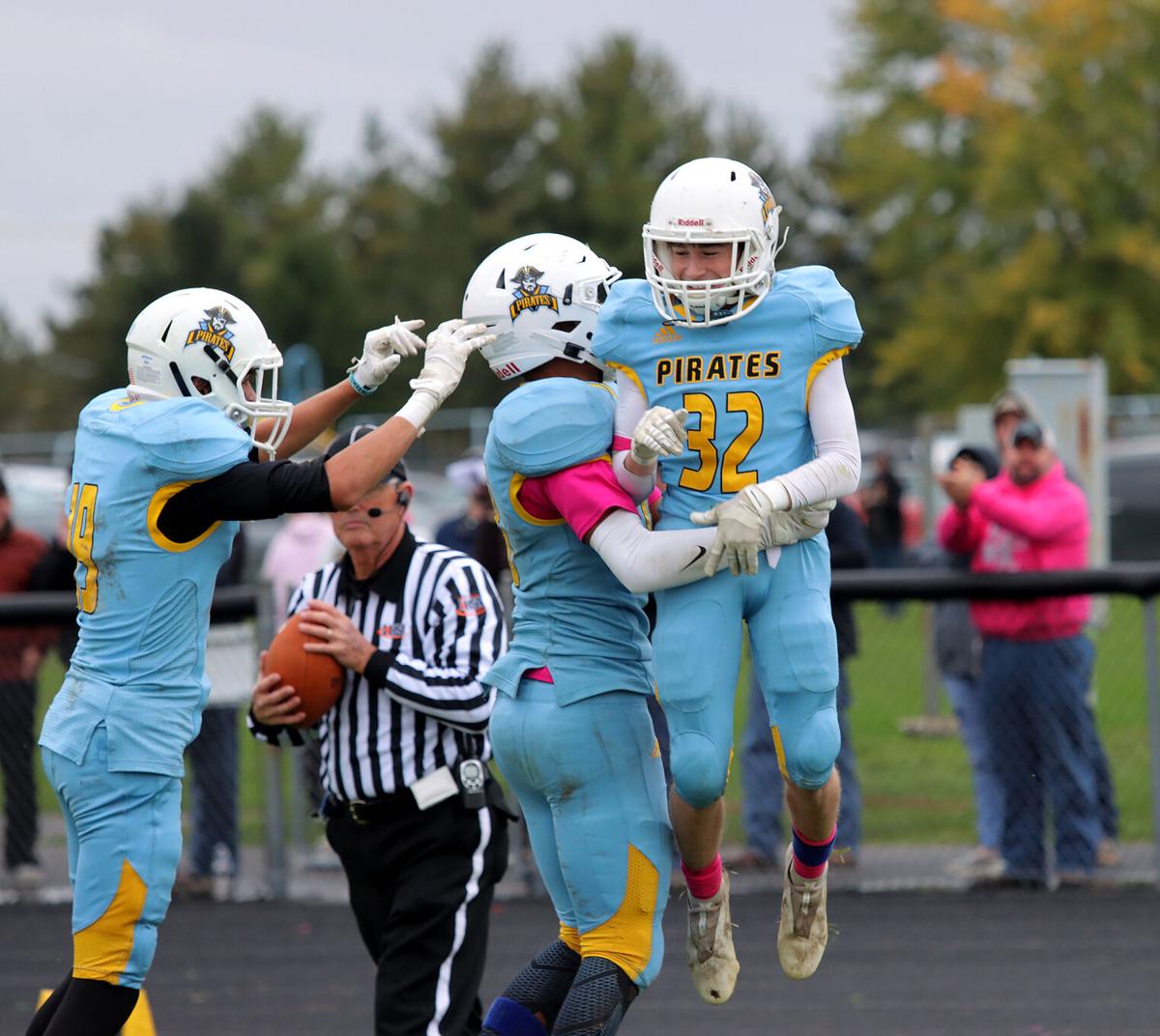 Members of the Cumberland football team take the field before a first-round game against Mt. Sterling (Brown County) Saturday, October 30, 2021, at Pirate Field.

All good things come to an end, some sooner than imagined.

Tears rolled down the faces of 11 seniors as they walked off the field for the last time, all of whom head coach Lucas Watkins couldn’t help but rave about after the postgame huddle.

“I just chatted with all of them. It was very emotional,” Watkins said. “I wanted to let them know what they meant to this program. They’ve had a great run, and I’m very proud of them. I would never question their heart, their desire, their grit; just a great group of kids, and I’m very sad that it’s over for them.”

Entering the game as the No. 13 seed, the Hornets didn’t play like it, pounding the fourth-seeded Pirates from start to finish by using a good mixture of running and passing plays.

On the ground, Mt. Sterling (Brown County) rushed for 147 yards and one touchdown, while quarterback Tate Fullerton threw for 136 yards and two scores on only eight completions.

“That was a good football team,” Watkins said. “We didn’t overlook them. We knew they were going to be good. They ran the ball very effectively, which we had issues with, and they could control the clock. Then, we made a couple of mistakes there at the end, and you can’t do that against a quality opponent.”

The Hornets scored on their second drive when Fullerton completed a 51-yard pass to senior Brody Woodward after the running back caught the Cumberland defense off-guard. A successful two-point conversion run from junior Cole Behymer then made the score 8-0 with 9:19 left in the second quarter.

However, that wouldn’t be the last time Pirates’ fans heard those two names.

Toward the end of the first half, the Fullerton-to-Woodward connection struck again on a one-yard score with nine seconds left that made it 16-7 heading into halftime, quieting a typically boisterous fan section at Pirate Field.

Desperately needing a spark, Cumberland provided just that, scoring on their first offensive drive of the second half when senior Iysten Syfert muscled his way into the end zone from four yards out, making it a two-point game.

Suddenly, that once quiet fan section had something to give them hope.

“We made a few defensive adjustments there. It helped it slow us down,” said Watkins on what he talked to his team about at halftime. “We committed in the first half to stop the run, and then they were able to get their wings and their tight ends out in open space, which was unfortunate. Offensively, we saw some stuff that we thought we could take advantage of and did there on that first offensive series. So, just changing the defense and trying to take advantage of what they were giving us.”

But, like how most of the game went, a once stout offense couldn’t gain any ground against the Hornets.

Cumberland finished with 134 rushing yards to 54 passing yards — 34 coming on a touchdown pass from senior Logan Thilker to sophomore Blake McMechan for the only score of the first half.

“We knew we were going to see that on film,” Watkins said. “We weren’t getting a lot of push upfront. It was like a stalemate. We could get outside a little bit, but we slipped a few times, which is no excuse. We like to get outside and run jets and sweeps, and we lost our footing sometime.”

The Pirates end the season with the most regular season wins (eight) in school history. They have seven juniors, six sophomores, and one freshman on the varsity roster.