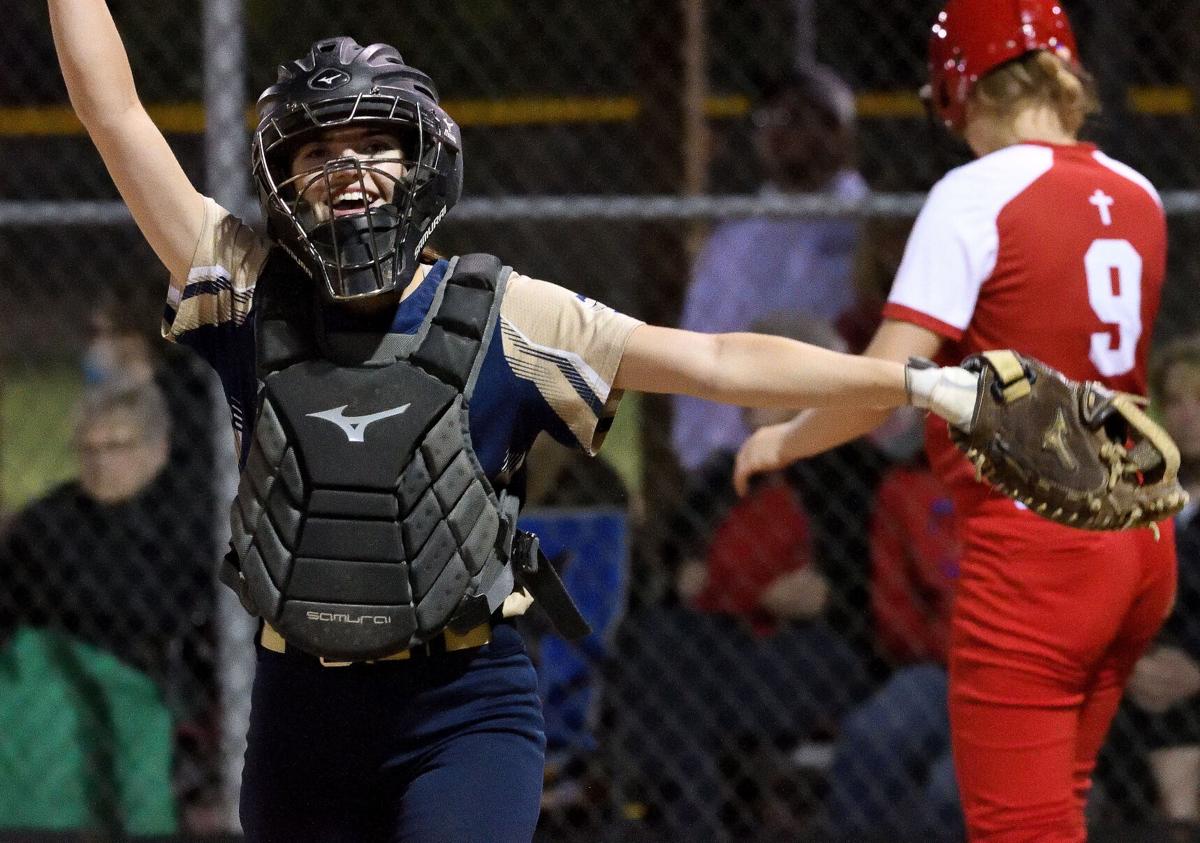 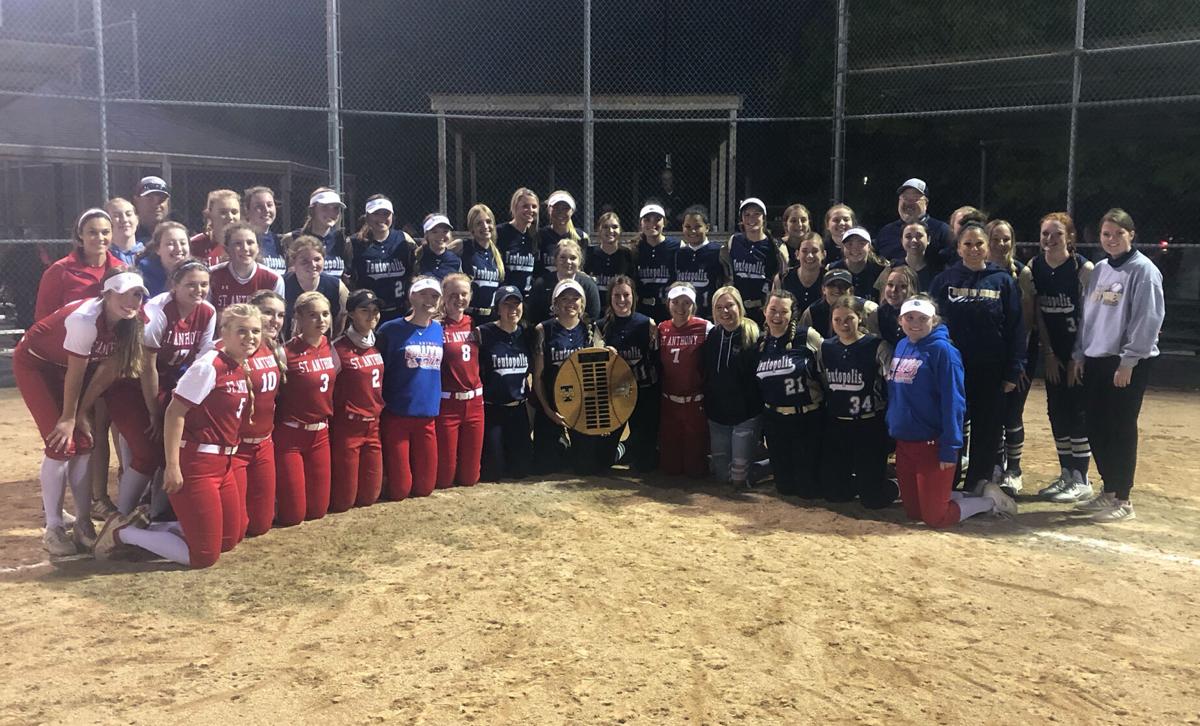 The St. Anthony Bulldogs and the Teutopolis Lady Shoes pose with the trophy after the Cross Creek Classic Friday. Teutopolis defeated St. Anthony 14-6.

The St. Anthony Bulldogs and the Teutopolis Lady Shoes pose with the trophy after the Cross Creek Classic Friday. Teutopolis defeated St. Anthony 14-6.

The Teutopolis Lady Shoes used an early lead to help set the tone and defeat the St. Anthony Bulldogs Friday 14-6 in the annual Cross Creek Classic.

“I’m proud of how our approaches were at the plate,” said Teutopolis head coach Crystal Tipton. “They were swinging and making some solid hits. Even a lot of the outs were actually real solid hits they made nice plays on.

“[Teutopolis] treated it like another game, so that mentality right there worked for them.”

While not new to the rivalry, it was Tipton’s first time on the Teutopolis side of the rivalry after being the head coach of St. Anthony for over a decade and was a major part in starting the annual game between the two teams.

“It was definitely emotional,” said Tipton. “I know all those girls on St. Anthony except for the transfers. I’ve been working with them since they were really little, so it was emotional for me to see them out there. But I’m happy with where I’m at and what I’m doing here at T-Town and excited to keep going forward.”

It was also rather a surreal moment for Makayla Walsh coaching in her first Cross Creek Classic, after playing in this rivalry game with Tipton as her coach before graduating in 2014.

“It’s really hard because you have accountability for all 15 girls,” said Walsh. “it’s a lot of stats and you’re trying to go off of that stuff and you really can’t do that because every team you play is so different.

“It’s fun, I love it under the lights. It’s a fun rivalry for us. It was for sure different seeing [Tipton] in T-Town attire rather than St. Anthony, but it was really neat. She has solid hitters and that’s fun to see. I’m looking forward to them having a good year, so good luck to them.”

Teutopolis wasted no time getting on the board. With two runners on and one out, Erin Althoff came in to score from third on a wild pitch to make it 1-0 and Emily Konkel, who reached on an error moved up to third.

Lexie Niebrugge singled to center to drive in Konkel to make it 2-0 after the top of the first.

St. Anthony threatened in the home-half of the first after Addie Wernsing singled and Sydney Kibler drew a walk with one out. But the Bulldogs lined into a double play to quickly thwart the scoring chance.

After both teams went scoreless in the second, the Lady Shoes put a pair of runners on when Konkel singled and Tia Probst drew a walk with one out. Olivia Copple courtesy-ran for Probst at first.

Once again, Lexie Niebrugge didn’t let the quality scoring chance go to waste, hitting a double to center to score Konkel and Copple and make it a 4-0 lead.

But the Lady Shoes weren’t done, as Estella Mette singled to left to drive in Niebrugge. Courtney Gibson was able to reach on an error to put runners at the corners with two outs for Mallory Stone.

“I think the team that has the better defense in that situation is going to win that game 10 out of 10 times,” Walsh said. “We started off with an error and I think that really dictates the game and how it plays out too.”

Stone came up clutch, notching a triple to center, driving in Mette and Gibson to make it a 7-0 lead after 2 1/2 innings.

After the Bulldogs went down in order in the bottom of the third, Althoff led off the top of the fourth with a double, followed by a walk from Konkel. After a fielder’s choice and a ground out, it looked as though the Bulldogs had the chance to get out of the inning unscathed.

But that changed when Kaylee Niebrugge doubled to left, driving in Konkel and Copple, who again courtesy-ran for Probst, who reached on the fielder’s choice to make it a 9-0 lead after 3 1/2 innings.

The Bulldogs proved they weren’t going to go out with their heads hanging, as Sydney Kibler led off the inning with a single before coming in to score on a triple from Lucy Fearday. Fearday was able to score after Haley Niebrugge reached on an error, making it 9-2.

After Probst picked up back-to-back strikeouts, Alexis Stephens singled to drive in Haley Niebrugge and make it 9-3.

Wernsing retired the side in order in the top of the fifth, and came up with a one-out double before advancing to third on a wild pitch. She came in to score on a sacrifice fly from Sydney Kibler to make it 9-4.

With such a young team, Walsh was happy with her team sticking with it and not quitting

“When you dig yourself in a hole, it’s really hard to get yourself out of it,” Walsh said. “I preach to the girls that you have to turn the page in that situation.”

Still with no outs in the inning, Kaylee Niebrugge got aboard on a double, advancing Lexie Niebrugge to third. The next two Lady Shoes batters grounded out, but Lexie Niebrugge was able to score on a wild pitch to make it 13-4 before a pop out ended the inning.

In the top of the seventh, the Lady Shoes threatened again when Althoff drew a walk and Konkel singled. Probst grounded into a fielder’s choice for the second out of the inning, but Lexie Niebrugge came up with a single to center to score Konkel to make it 14-4.

“What a combination those three are,” Tipton said. “That’s why they’re at the top so they get more at-bats and they’ve been doing a great job with it.”

With two outs in the bottom of the seventh, Wernsing tripled and Kibler drew a walk before both came in to score on a triple from Fearday to make it 14-6.

That’s as close as they would get though, as Probst was able to get the last out on a ground out to first to earn the complete-game win in the Cross Creek Classic.

“I told [Probst] she needed to hit her spots and that, if she got ahead, make them chase pitches if she can or make them put the ball in play not as hard as they can. She had been struggling a little bit with control, so today was a great day for her to come back and show what she can do on the mound.”

The win improves the Lady Shoes to 5-4 while the loss drops St. Anthony to 6-3.