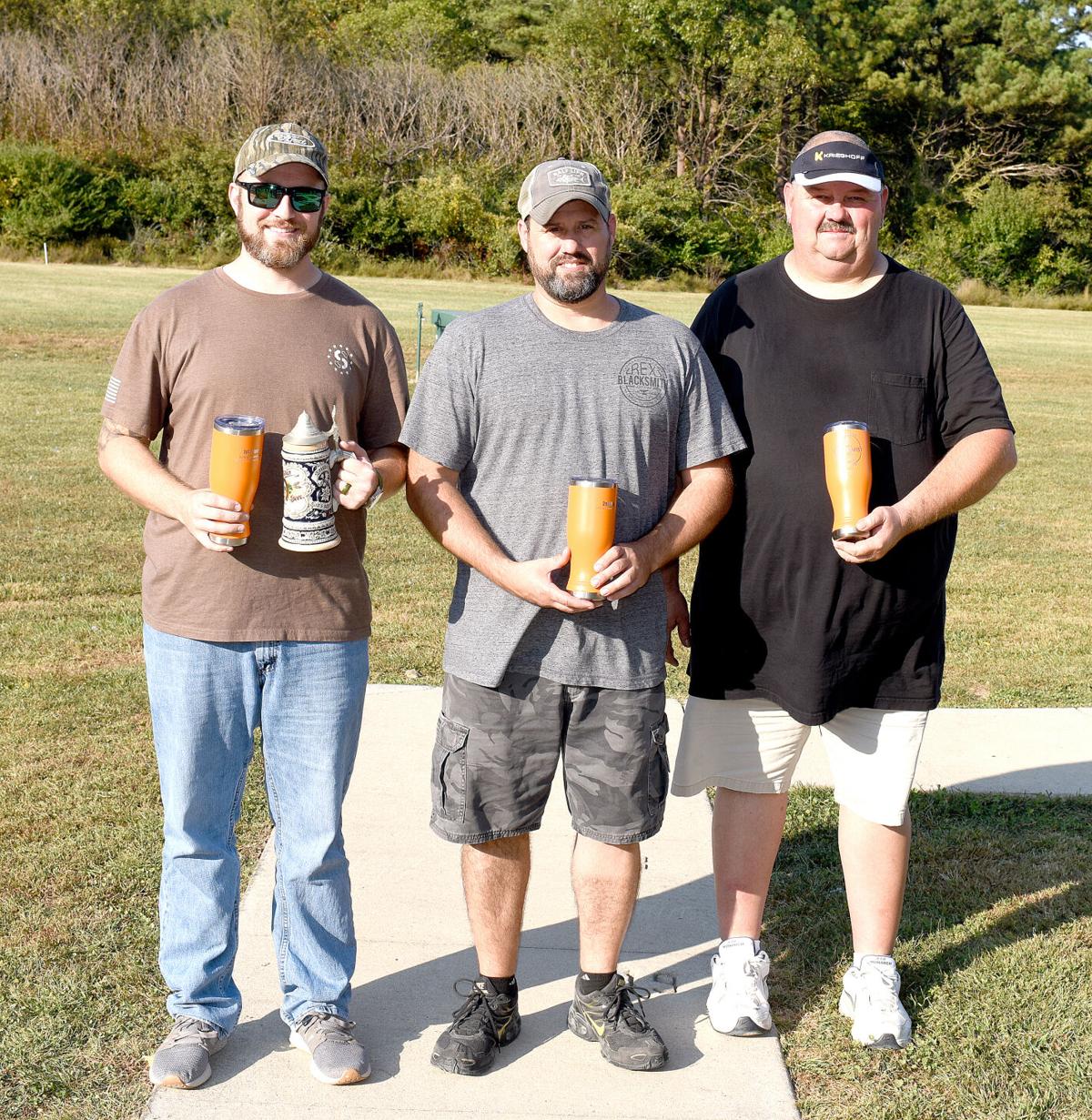 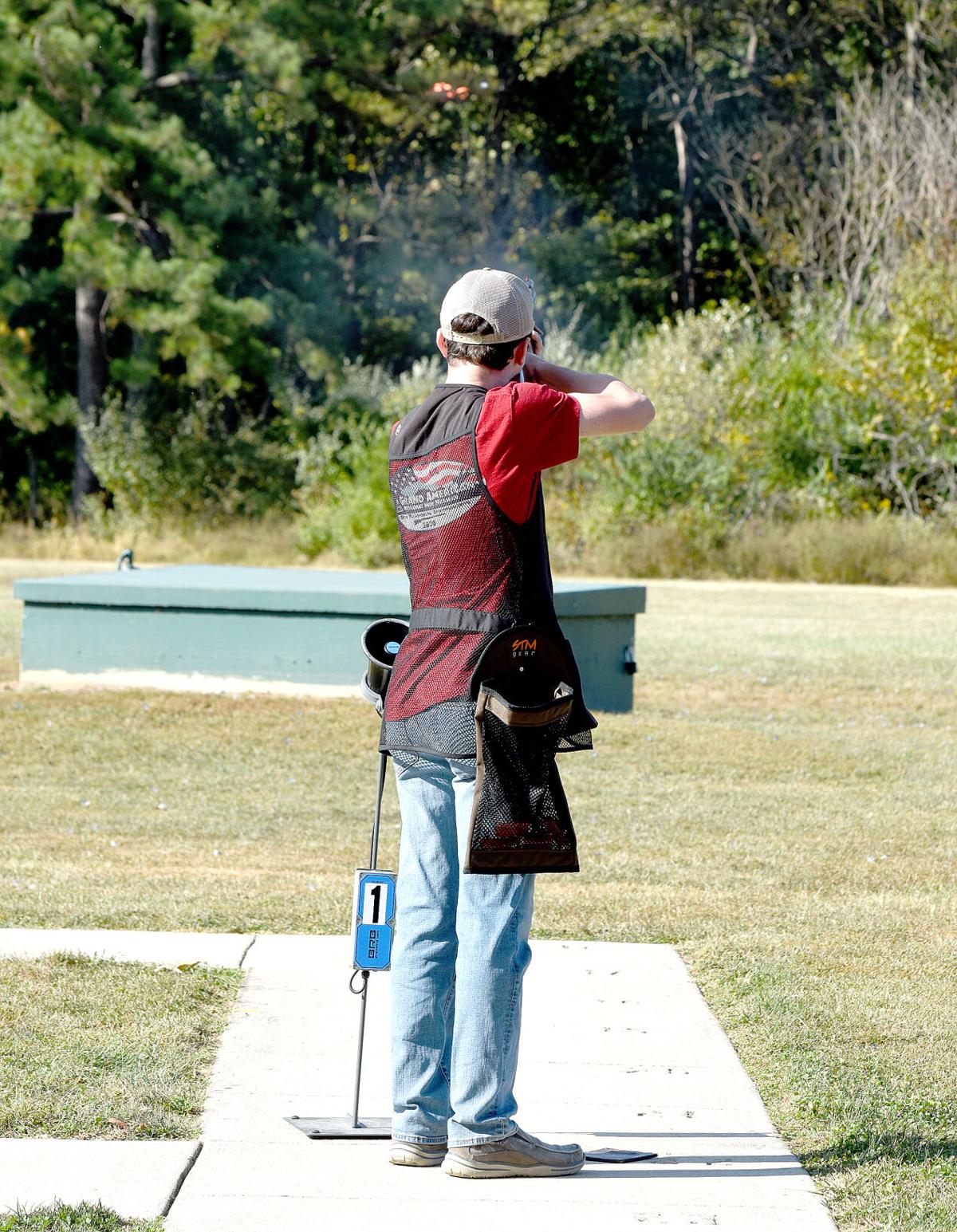 Lucas Smith of Greenup splits an orange clay bird Saturday during a shoot-off for second place overall in the Youth Division Flight A competition during the Schützenfest Trap Shoot. Smith and Kindyl Ingle of Toledo tied for second place with a score of 85. Smith took second place when he shot 9 birds in a best of 10 shoot-out. 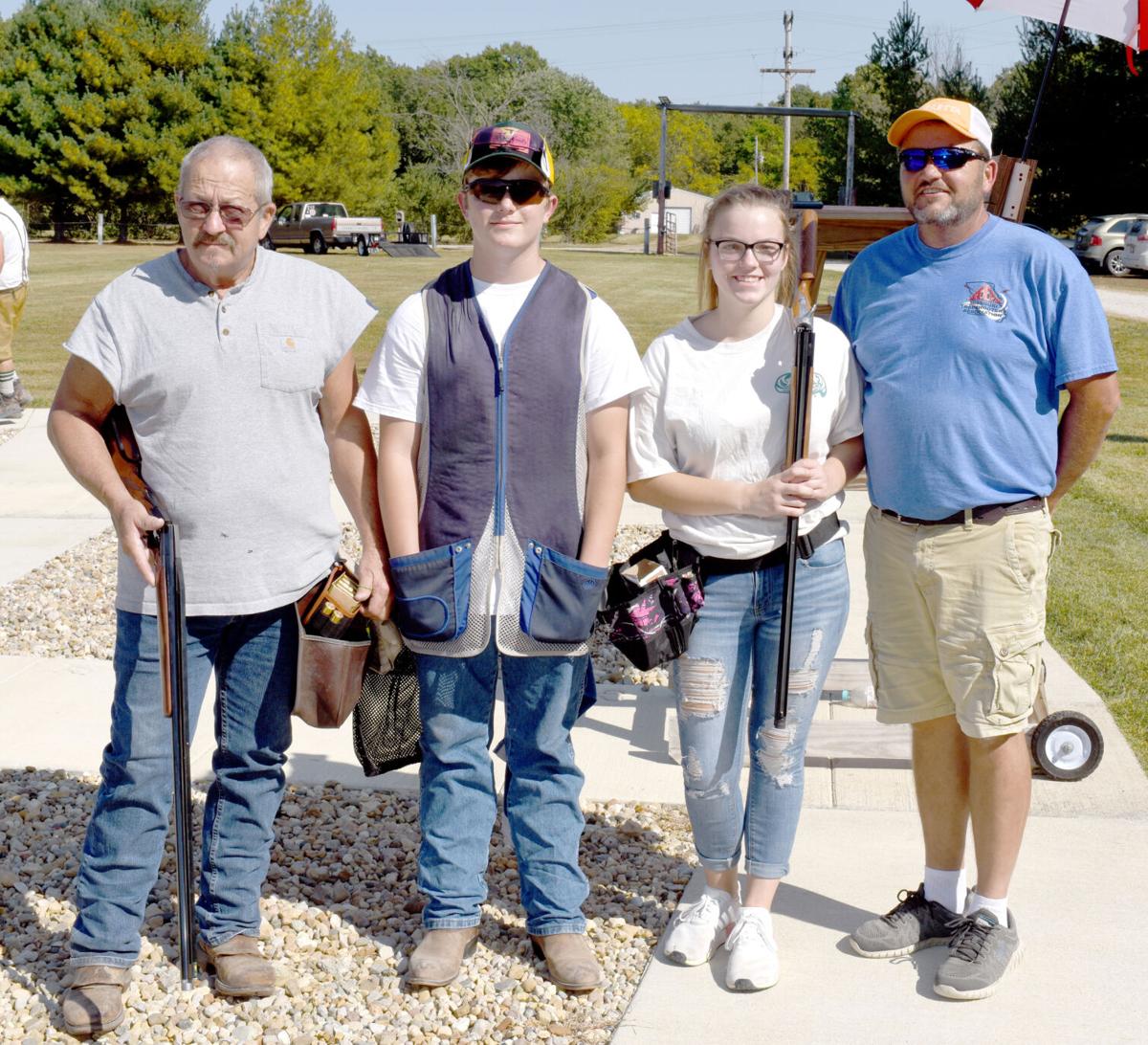 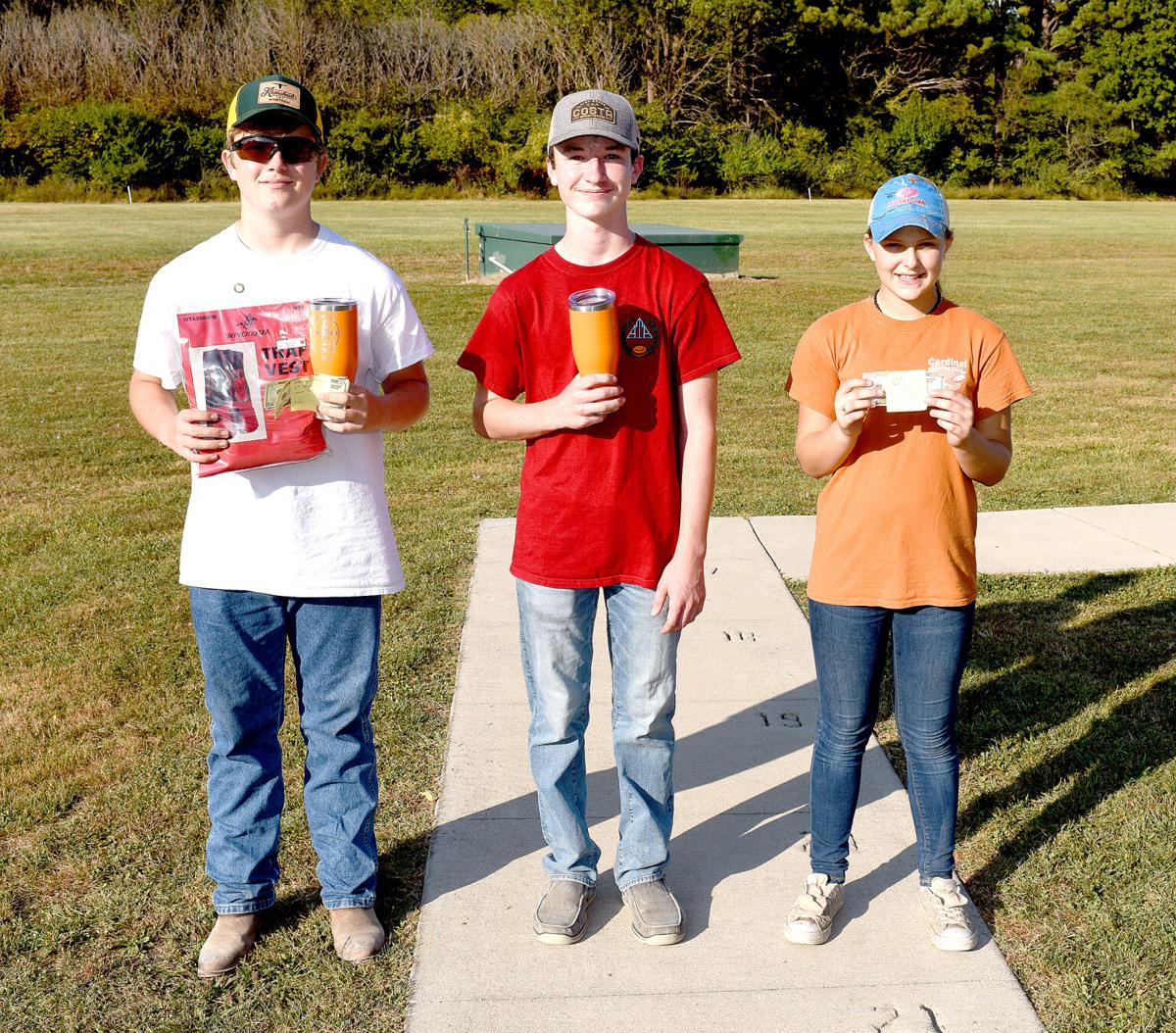 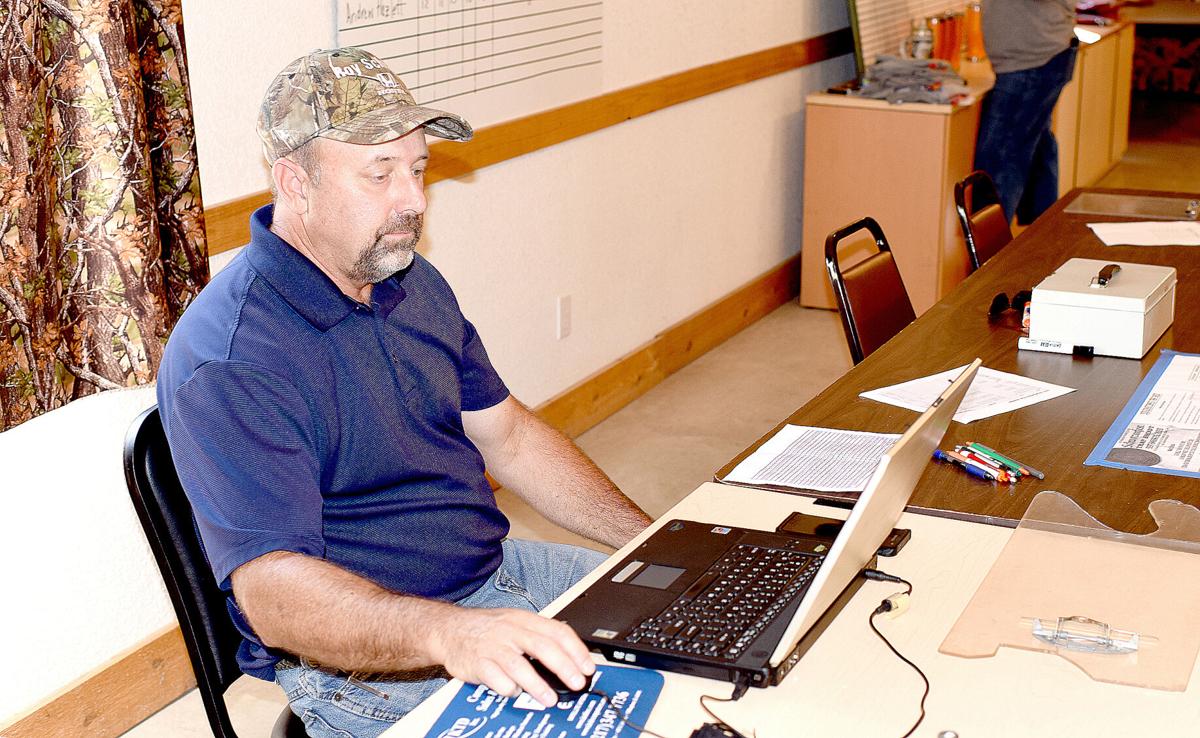 Lucas Smith of Greenup splits an orange clay bird Saturday during a shoot-off for second place overall in the Youth Division Flight A competition during the Schützenfest Trap Shoot. Smith and Kindyl Ingle of Toledo tied for second place with a score of 85. Smith took second place when he shot 9 birds in a best of 10 shoot-out.

Temperatures in the low 80s and a light summer breeze on Saturday was just the right combination for an annual fall shooting competition.

Thirty-eight gathered in Effingham County with their shotguns, competing to be Schuetzenkönig (champion marksman) for 2020 in one of two divisions for the Schüetzenfest Trap Shoot in cooperation with the Effingham County Sportman’s Club near Lake Sara.

Each participant in the youth and adult divisions shot four rounds of 25 clay targets (birds). The first two rounds of competition (total of 50 birds) at the 16-yard line determined each competitor’s handicap. The second two rounds were handicap rounds.

“The better your score, the further away you have to stand for the third and fourth rounds,” Event Organizer Dave Miller said.

Someone hitting all 50 birds in the two 16-yard rounds would have to stand back 27-yards for his or her final two rounds of 25 birds each, where someone who only shot 40 or less birds would stand at the 20-yard line.

“Lewis Class is an event in the event,” Miller said.

Only one shooter would take home the 2020 Schuetzenkönig honors.

This gave Painter a first two round score of 45 placing him on 23-yard line to shoot two handicap rounds of 25 birds. Painter took 22 birds in the first handicap round and 22 in the second.

Charles Butt of Gays took the third place overall in Class A adult division competition and third in Lewis Class A, shooting 47 birds in his two 16-yard rounds placing him at the 24-yard line for his two handicap rounds of 18 and 20 for a four-round total of 85.

Rounding out the Class A shooters were Bruce Albright with a four-round total of 83, Larry A. Himes with 80 and Lyle Kruger with 78.

In adult Class B action, Darrel Mellendorf had a four-round total of 75 earning him a first place title in Class B and first in Lewis Class B.

“I’ve had better days,” Emma Himes said. “The bird would go up a lot when it got caught in the wind.”

“We have 24 kids on our high school team,” Himes said.

In the youth division, it all came down to a shoot-off between two shooters in Flight A for second place overall.

Brandon Himes took home the high honors in Flight A youth competition missing only one in the first 16-yard round for 24 birds and hit 21 birds in the second round giving him a two-round total of 45, sending him to the 23-yard line for rounds 3 and 4. Himes finished with a four-round total of 88 bringing home Flight A first place overall and Lewis Class A first place.

Second place was determined by a 10-bird shoot-off between Lucas Smith of Greenup and Kindyl Ingle of Toledo both scoring a four-round total of 85. Smith’s handicap placed him at the 22-yard line while Ingle stood ready at the 20-yard line for shoot-off competition.

Kindyl Ingle is a sixth grader from Toledo. She said she started shooting 3 years ago and Lucas Smith who lives in Greenup is a Freshman at Cumberland High School and has been shooting between 2 and 3 years.

Smith won the shoot-off scoring 9 of 10 while Ingle hit 8 of 10 birds. Smith placed second overall in the youth division and tied for second place with Ingle in the Lewis Class A competition. Kolton Tedrick took home third place in Lewis Class A with a four-round total of 82.

The top three winners in the Flight A group Himes, Smith and Ingle are all members of the Cumberland High School Trap Shooting Team and Cumberland Boomsticks ATA/SCPT team.

Rounding out Flight A was Emma Himes and Shawn Hickey both scoring 78 for four rounds.

Flight B and C winners only placed in Lewis Class competition.