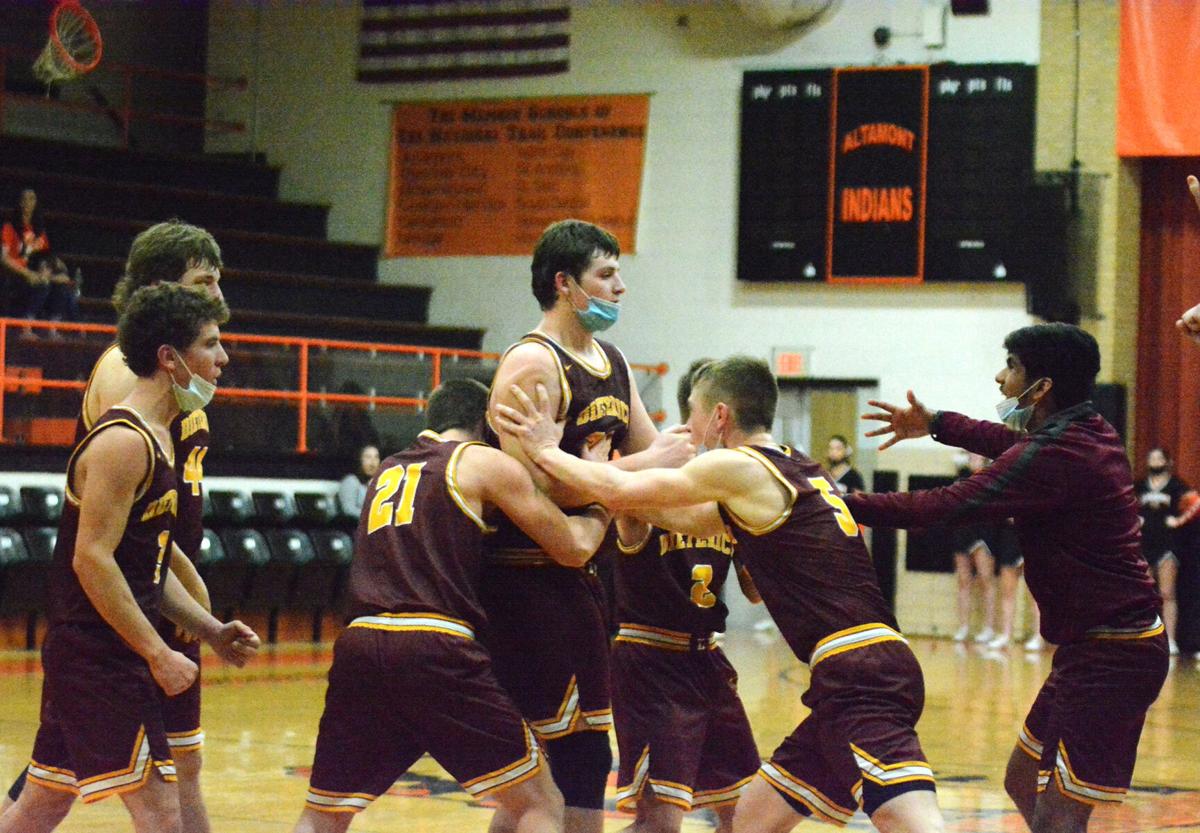 Dieterich’s Derek Kuhl (middle) is swarmed by his teammates after hitting a last-second layup to defeat the Altamont Indians Friday 52-50 in National Trail Conference Play. 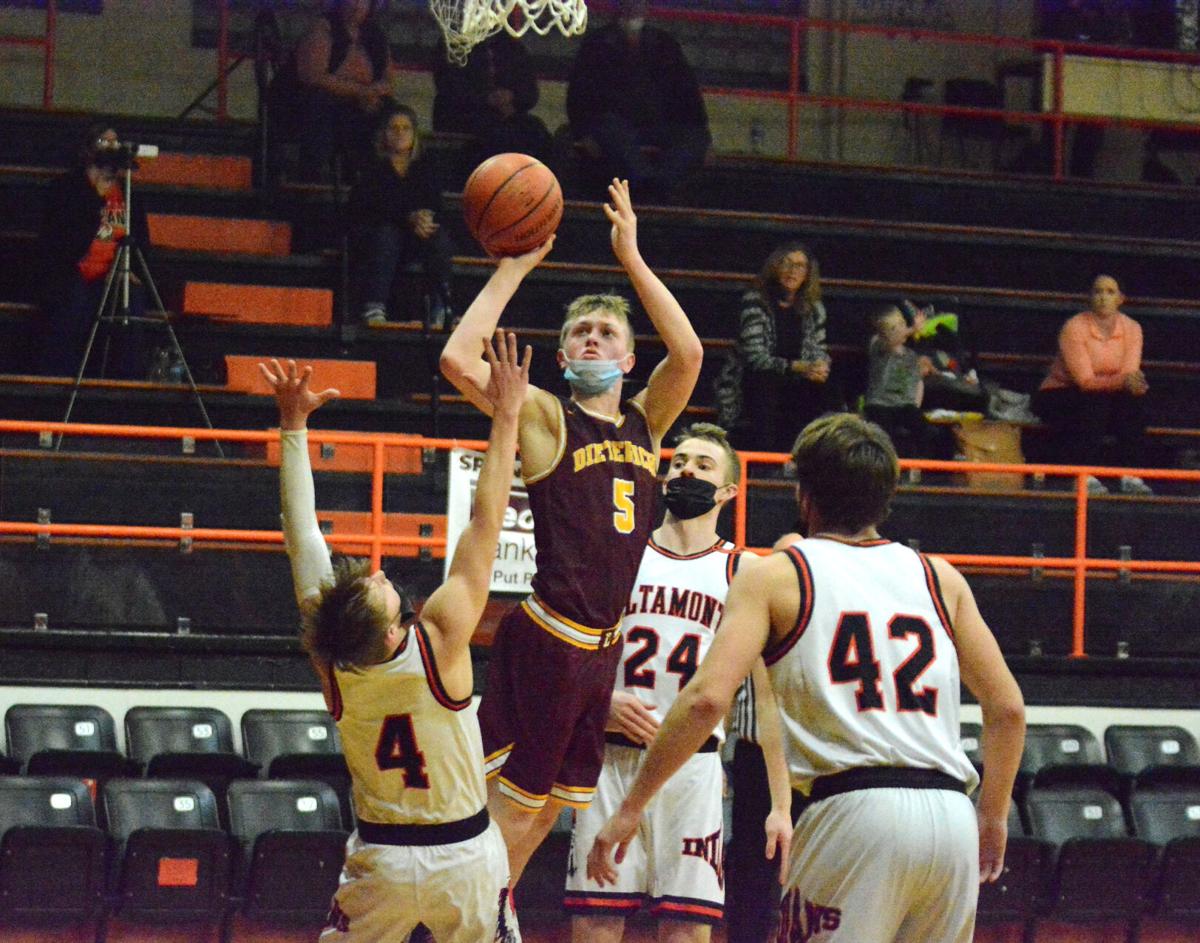 Dieterich’s Derek Kuhl (middle) is swarmed by his teammates after hitting a last-second layup to defeat the Altamont Indians Friday 52-50 in National Trail Conference Play.

The Movin’ Maroons of Dieterich used a layup from Derek Kuhl at the buzzer to defeat the Altamont Indians Friday 52-50 in National Trail Conference play.

“I think in those last four minutes we were able to keep our poise and not allow multiple things to snowball,” said Dieterich head coach Josh Krumwiede. “We fought. It was tough and we had to grind out possessions and I’m proud of them for that. It was a great game between two great teams. Our guys had a look in their eye tonight of ‘we can do this.’ They weren’t afraid of the pressure and I’m proud of them for taking on that challenge.”

With that win, the Movin’ Maroons take sole ownership of the No. 2 seed in the NTC, as both teams entered the game with just one loss in conference play, both to St. Anthony.

The ending didn’t come without controversy however. On the final play, Pete Britton found Derek Kuhl rolling to the basket after setting a screen.

An Altamont defender got in position and fell back hoping to draw a charge. Typically, it either has to be a charge or a blocking foul. But no call was made either way, as the Movin’ Maroons emerged victorious.

“I thought Brennyn [Abendroth] gave up his body at the end,” said Altamont head coach John Niebrugge. “This isn’t the NBA, you don’t swallow your whistle. We didn’t know what a charge was. But you can’t blame it on the officials. It’s hard to get in the flow when stuff is choppy like that.

It was a close game throughout, as no team held a lead larger than six the entire night.

Dieterich was fueled by Britton early on, scoring 16 of his 20 points in the first half, including a 3-pointer right before the halftime break to tie the game at 30.

“Tonight, he set the tone for us,” Krumwiede said. “The point scoring is great, but I think our guys look at him, even as a sophomore, when his body language is good and when he’s scoring and defending. He guarded the other team’s best player tonight too.

“Whatever it is, he plays great in this gym. Seeing him compete and give everything that he had is not unusual. It’s something we’ve seen a lot from him, but tonight was one of the better games of his career.”

With so much on the line, both coaches were passionately invested, perhaps to a fault when Josh Krumwiede was given a technical foul for arguing with the officials. Kaden Eirhart made both free throws to give the Indians their largest lead of the night at 38-32 with 5:10 left in the third quarter.

The Movin’ Maroons cut the deficit to two after a made free throw as well as a 3-pointer from Britton with four minutes to go at 38-36, but Eirhart quickly responded with a 3-pointer of his own to go up 41-36. Five of Eirhart’s nine points came in that third quarter.

“It was nothing we hadn’t seen,” Niebrugge said. “Kaden wasn’t getting it on the defensive end where he could get an outlet and get downhill somewhere. Everybody knows he’s the alpha on our team, so he’s going to get their best defensive effort.

“Dieterich brought it tonight. I don’t think they did anything different. They’re long underneath too, so that limited some layup situations.”

But with under 1:30 to go, Andrew Lidy made a layup to cut the deficit to three, followed by a pair of made free throws from Bryce Budde to make it a one-point game going into the final quarter.

The start of the fourth was back-and-forth, with Altamont’s Noah Klimpel and Dieterich’s Budde exchanging baskets. But a layup from Brennyn Abendroth put the Indians up three.

Following an empty trip to the free-throw line from the Indians, Jack Westendorf was able to get a shot in close to fall to make it a one-point game with 5:21 to go.

The Indians quickly made up for the missed opportunity when Derick Budde drilled a 3-pointer to put his team up 48-44.

Dieterich followed that with a 6-0 run with a layup from Kuhl, followed by a baseline jumper from Lidy and pair of made free throws from Bryce Budde to take a 50-48 lead.

The Movin’ Maroons had a chance to extend the lead in a one-and-one situation, but missed the first one, giving Altamont a chance with 42 seconds left. The missed opportunity at the line looked like it was going to come back to haunt Dieterich when Abendroth hit a wide open layup to tie the game at 50 with 28 seconds left. Abendroth led the Indians with 16 points.

Looking for the last shot, Britton dribbled at the top of the key before using Kuhl’s pick and dumping it off to him after both defenders doubled Britton. Kuhl made the shot and gave the Movin’ Maroons the win.