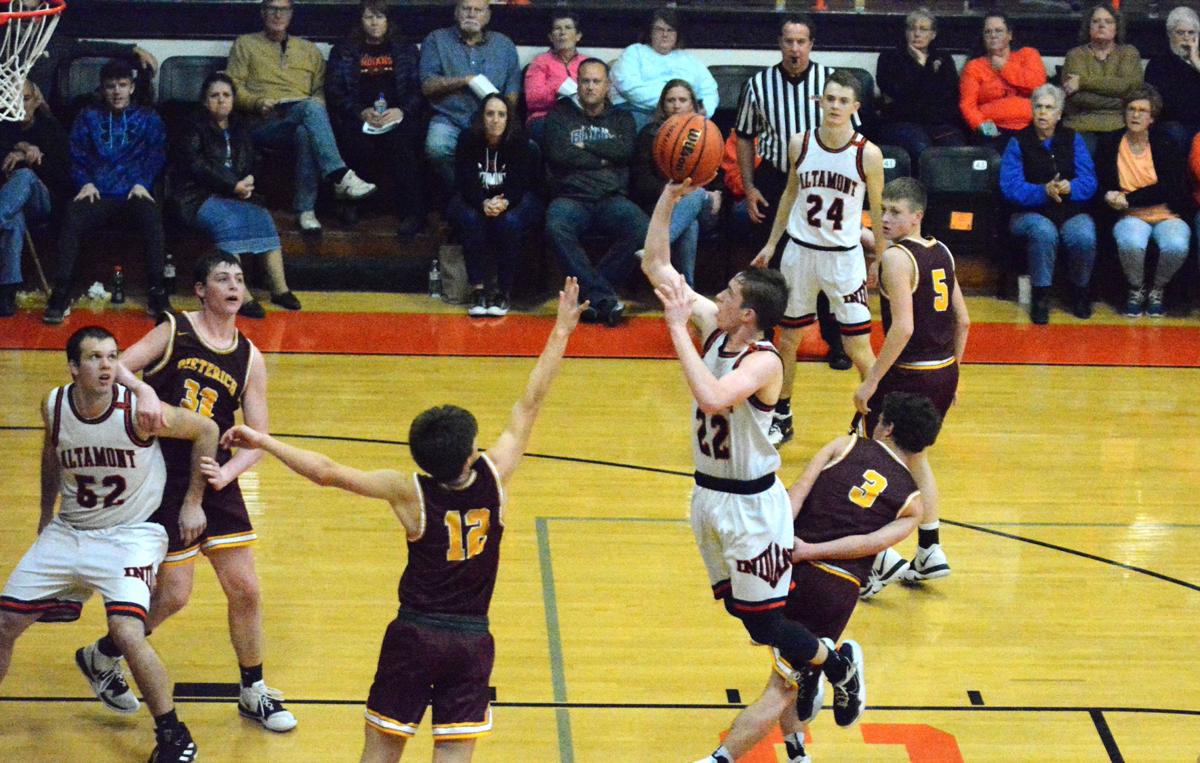 Altamont’s Aidan Jahraus shoots a floater in the lane in the team’s win over Dieterich Friday at the 85th Annual National Trail Conference Tournament at Altamont High School. 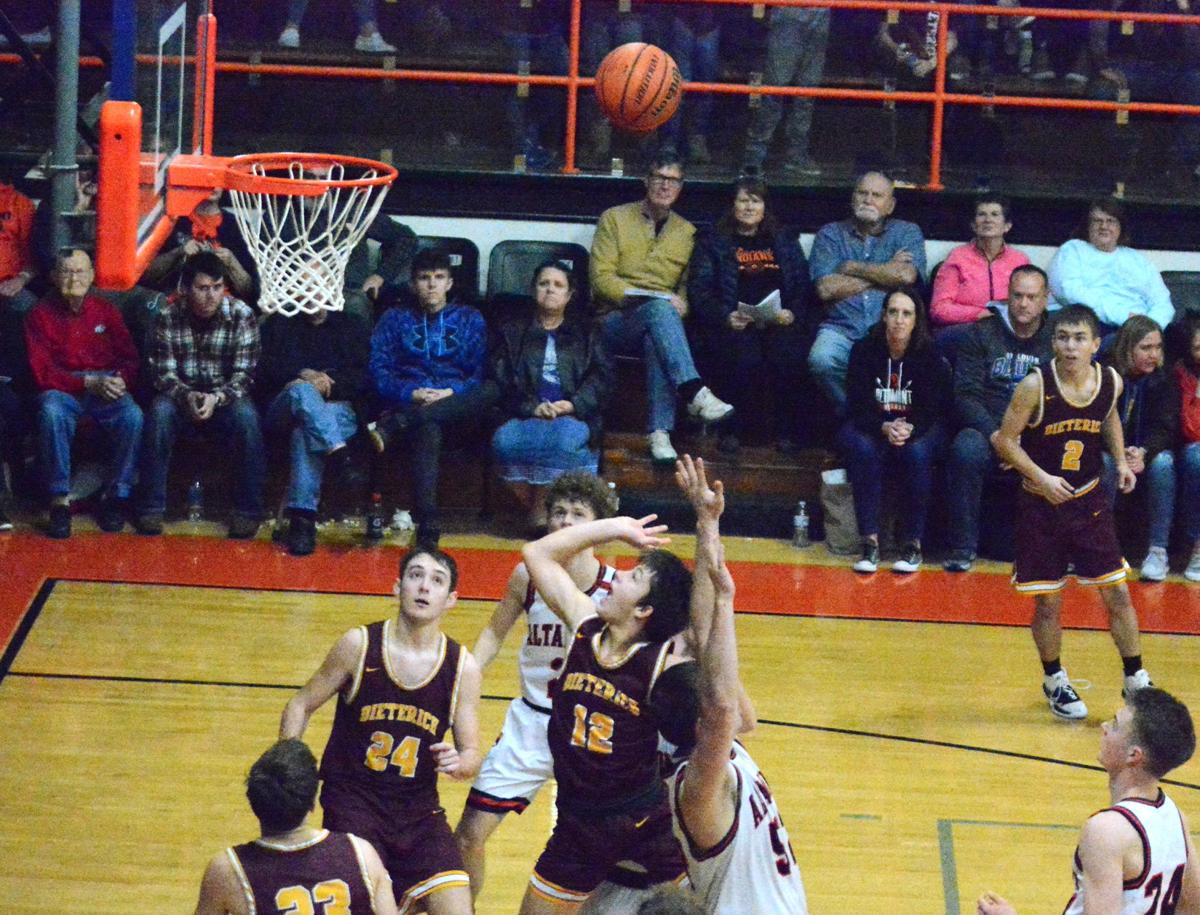 Dieterich’s Pete Britton drives to the rim in the team’s loss to Altamont Friday at the National Trail Conference Tournament.

Altamont’s Aidan Jahraus shoots a floater in the lane in the team’s win over Dieterich Friday at the 85th Annual National Trail Conference Tournament at Altamont High School.

Dieterich’s Pete Britton drives to the rim in the team’s loss to Altamont Friday at the National Trail Conference Tournament.

The Altamont Indians erased a nine-point deficit halfway through the third quarter to come back and defeat the Movin’ Maroons of Dieterich High School 62-50 Friday in the semifinal of the 85th Annual National Trail Conference Tournament.

“I told them to keep grinding,” said Altamont head coach John Niebrugge. “We didn’t change anything. We kept going with the same offense and same defense.”

The Indians were able to cut into the nine-point deficit with two made free throws followed by a three from Aidan Jahraus, as well as a putback from Jared Ruffner.

A layup from Kaden Eirhart was able to tie the game in the final minute of the third, but two big layups from Pete Britton, including an old-fashioned 3-point play helped put the Movin’ Maroons back in front going into the fourth.

Part of what had made the Movin’ Maroons so successful was the success Britton was able to have, scoring eight points in the first half followed by nine in the third on his way to finishing with 21.

“I’m not going to sit here and say I expected him to have that type of performance,” said Dieterich head coach Josh Krumwiede. “But at the same time, we know he’s capable of doing something similar to that. He’s such a confident player as a freshman.

“In a game like that, words can’t describe how proud I am of him and the way he played tonight and handled himself maybe even more importantly. When things were tough, he was still our guy that was scoring and getting to the rim. He really showed the player that he really can be. You could maybe even make the argument he kind of burst onto the scene.”

Eirhart came out of the quarter break and immediately cut the deficit to one on a 3-pointer and gave the Indians the lead on the next possession with a layup. A layup from Jahraus of Dieterich’s third turnover of the quarter put the Indians up four.

“There were so many possessions I wish we could have back,” Krumwiede said. “And I have to be better too. We need to weather the storm a little bit better. We were leading the game. You could argue we were the better team for most of the game.

“But our team has had a little trouble finishing. We didn’t start giving it up as quickly this time as we did last time, but there were just plays on offense where we were lost and forcing things and turning the ball over. Every time we would shoot and miss, they pushed in transition and got shots they wanted.”

It looked like the Indians were going to increase the lead when Eirhart drove to the rim and knocked down a layup, but Dieterich’s Derek Kuhl rotated over in time to take the charge to take the points off the board.

Denver Duckwitz scored on a layup to cut the deficit to one, followed by a big 3-pointer from Noah Teasley to put his team back ahead 50-48. Those five points proved to be the start of 17-2 run for the rest of the game.

“I think we got more active in the fourth quarter,” Niebrugge said. “Hands got active, we got a lot of deflections. Our feet got more active. We weren’t just sitting back and seeing if they scored or not, that’s not us.

“I don’t know why the sense of urgency doesn’t start earlier. I don’t know if its our warmups or my pregame speech. We were thinking too much rather than being ourselves.

With two minutes remaining, the Indians were able to rebound their own miss on a free throw that led to a a dagger three from Eirhart to put his team up 54-48.

From there the Movin’ Maroons were forced to foul and put the Indians at the line, with the Indians knocking down every free throw before a putback from Cole Niebrugge at the final buzzer made it 62-50.

Up next, the Indians advance to the championship game to take on the St. Anthony Bulldogs at 7:30 p.m., while the Movin’ Maroons will take on Neoga at roughly 2:30 p.m. for third place.

The South Central Cougars defeated the Hatchets of Windsor/Stewardson-Strasburg Friday in the consolation round of the NTC Tournament.