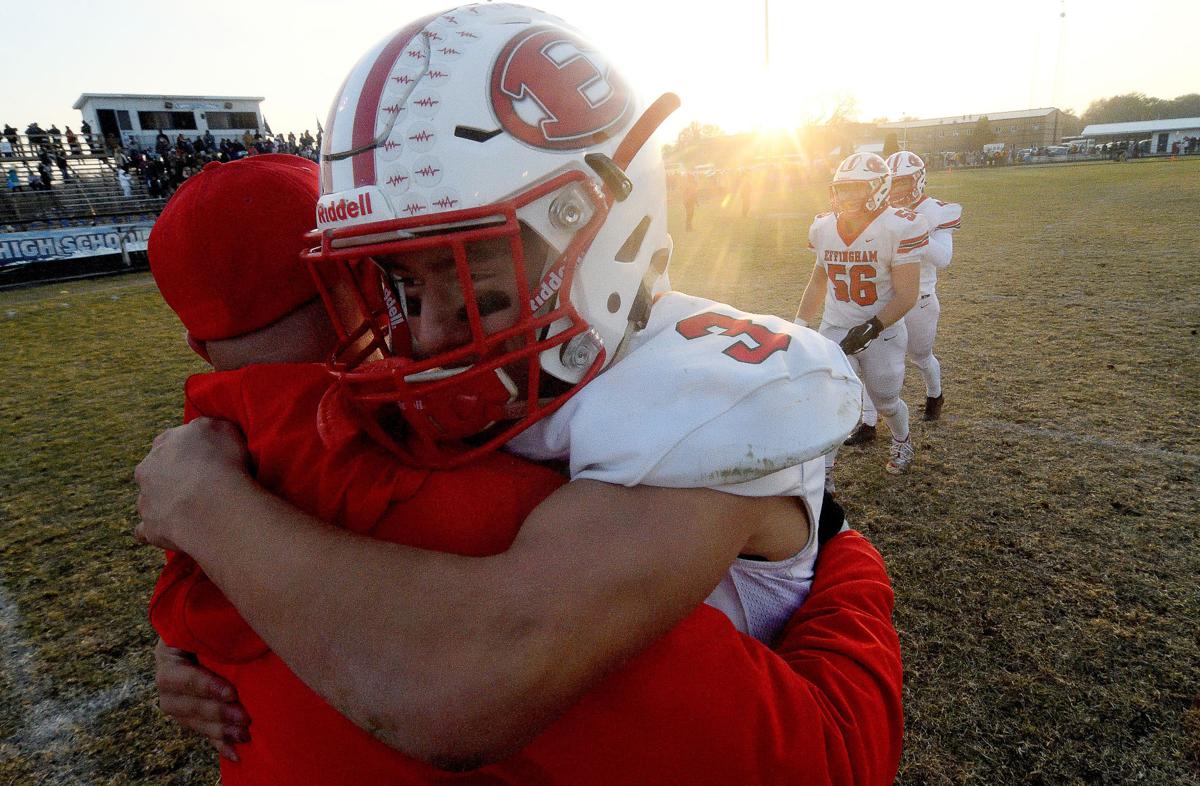 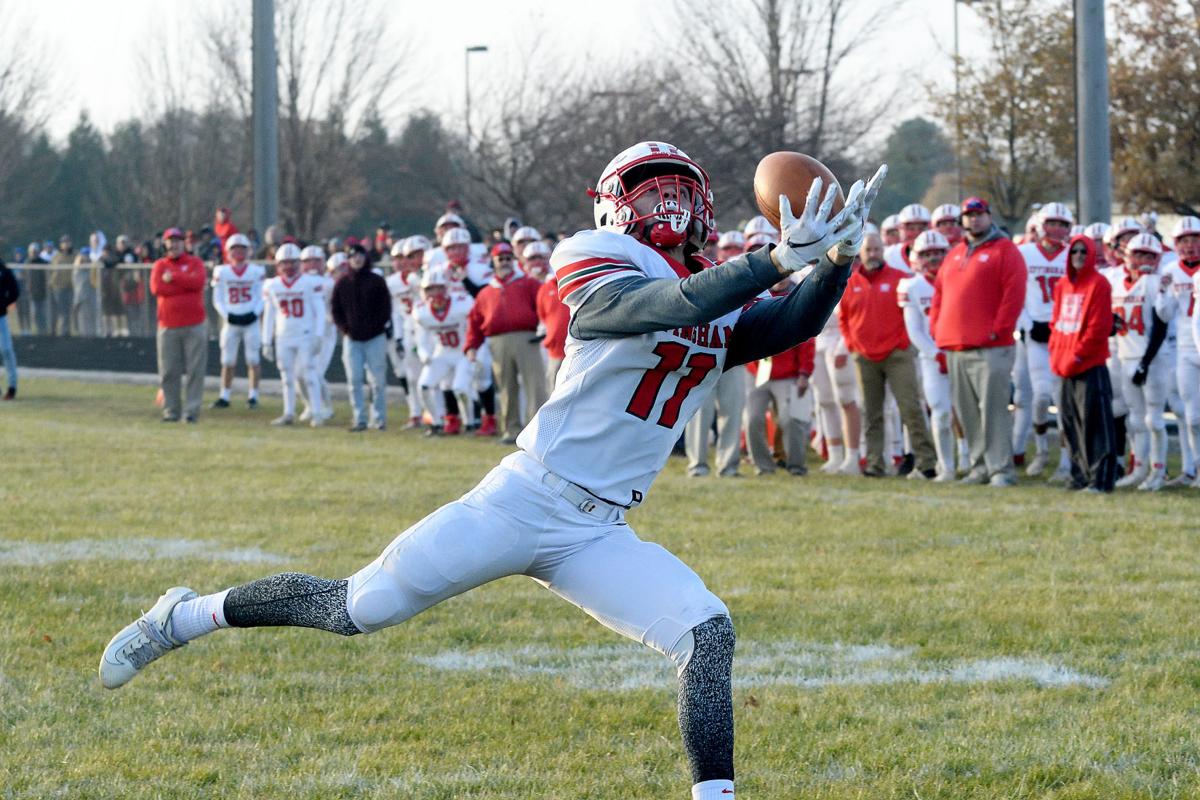 Effingham’s Tristin Duncan reaches out for a pass against Prairie Central during their IHSA Class 4A quarterfinal game at Fairbury Saturday afternoon. Duncan would score on the play leading to a 27-14 Hearts victory. 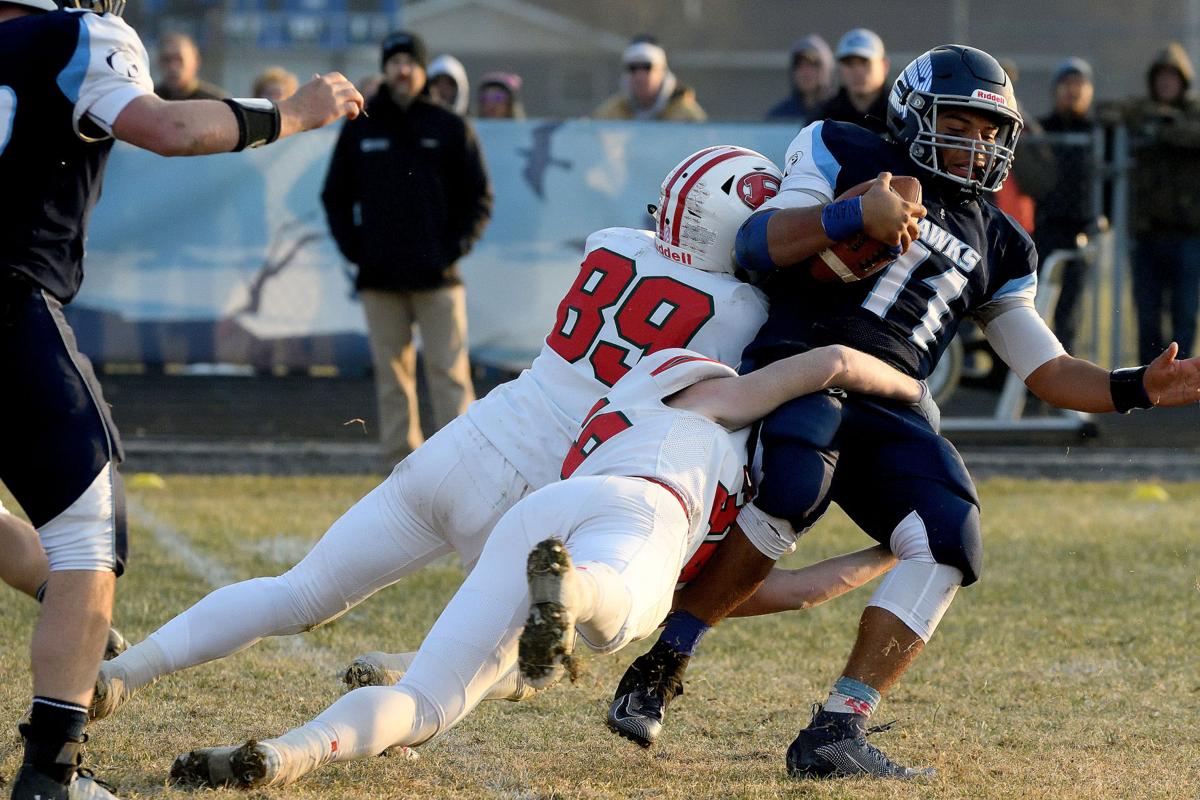 Effingham’s Tristin Duncan reaches out for a pass against Prairie Central during their IHSA Class 4A quarterfinal game at Fairbury Saturday afternoon. Duncan would score on the play leading to a 27-14 Hearts victory.

“The first half wasn’t as good as we could play, and I’m sure [Prairie Central] had something to do with that,” said Hearts head coach Brett Hefner. “But we had some uncharacteristic mistakes that they took advantage of. It looked a lot more like us in the second half.

“There’s a lot of guys that took yellings in the first half that came back and made big plays in the second half. That’s what it’s all about. We talk all the time about play the next play. Our guys are resilient. Parents let them be coached hard.

“Our kids are tougher than nails and take coaching. They don’t sulk, they don’t pout, they come back and play the next play. That’s life. Life isn’t easy.”

Coming out of the gate, it looked like business as usual for the Hearts offensively, with Nate Shackelford finding Cameron Kalber for a big gain on the first play, followed by a first down run from Chase Woomer.

That set up Shackelford finding Jett Gillum for a 18-yard touchdown to take a 7-0 lead with 10 minutes, 11 seconds remaining in the first.

Prairie Central quarterback Kaden King proved early he would be a force to take down, breaking a tackle on a fourth-and-2 for a fourth-down conversion down to the Effingham 30-yard line.

But the defense stood tall, forcing a turnover on downs on a fourth-and-5 to take over on their own 21-yard line.

The Prairie Central defense proved they wouldn’t be as easy to score on as the first drive, forcing a three-and-out as well to end the quarter with a 7-0 lead.

A pass interference call gave the Hawks a first down at the Effingham 38-yard line. The Hearts got the benefit of sloppy play from Prairie Central on a third-and-three, with the Hawks being flagged for a false start to make it third-and-8. The ensuing pass was incomplete, setting up a fourth-and-8.

The Hawks were assessed a delay of game penalty to make it 4th-and-13. But the additional yardage proved to not be a factor, as King was able to benefit from a bunch formation of three receivers on the right side and nobody on the left. With the Hearts in man-to-man coverage, the left side was left wide open, leaving the space open for King to rush for a 24-yard fourth-down touchdown.

But the snap on the extra point was high, helping the Hearts keep a 7-6 lead.

With the Hearts at midfield, the Hearts fumbled the ball, giving the Hawks the ball back at the Effingham 49-yard line. Despite the Hawks having passed less than 35 times on the season coming into this game, King found Corbin Moser on the first play for a 51-yard touchdown. The two-point conversion was converted on a rush from King to give the Hawks a 14-7 lead with 8:31 remaining in the half.

After falling behind, Hefner told his sideline that fundamentals and toughness would be the key the rest of the way.

“We had too many breakdowns in the first half,” Hefner said. “To come back and play the way they did in the second half, you’re happy for them. On the biggest stage you want your guys to make plays and they did.”

After starting the drive at the 33-yard line, Shackelford found Kalber for a 15-yard completion down to the Effingham 48-yard line. After an option keeper set up the Hearts with a goal-to-go situation, Logan Brown found the end zone from five yards out to tie the game at 14 with 1:15 remaining.

The Hearts forced a punt on 4th-and-11 with 15 seconds remaining in the half and got the ball at the Hawks’ 15-yard line, giving the Hearts an opportunity for a quick score, but couldn’t come away with anything to go into halftime tied at 14.

The Effingham defense forced a punt on the Hawks’ first possession of the half. Shackelford found Kalber for a big catch to get the ball over midfield.

The Hearts did face a fourth down on the drive, with Logan Brown picking up the first down by the slimmest of margins on the measurement, setting up a 23-yard touchdown pass from Shackelford to Duncan. But the extra point was no good, giving the Hearts a 20-14 lead with 3:18 remaining in the third.

On a big third-and-16, Shackelford found Parker Wolfe for a 17-yard gain, who managed to hang onto the ball, despite taking a shot in the back from the Hawks defender right before the end of the third quarter.

“It’s a great feeling,” Shackelford said. “But we’re not satisfied. We’re 48 minutes away from getting to a championship game, which is the final goal. We’re ready for the challenge.”

The Hearts faced another third-and-long situation, this time Shackelford found Duncan for a 13-yard completion and a first down. Looking to also burn clock while advancing the ball, the Hearts went to Brown, picking up a first down on second down with a seven-yard run before scoring from four yards out with 8:42 remaining.

From there, the defense helped put the game away, with Luke Spencer picking off a pass with 6:25 remaining, but were forced to punt back to the Hawks.

Hasty picked up a big sack on the first play before Parker Wolfe picked off his eleventh pass of the year to help seal the win.

After Hefner was done addressing the team following the game, Shackelford told his team it’s 48 minutes to history.

Up next, the Flaming Hearts will return home to take on Murphysboro in the state semifinal with kickoff slated for 2 p.m. Saturday.

Quarterback Nate Shackelford discusses the Hearts' win in the quarterfinal on Saturday and the team's advance to the semifinal.