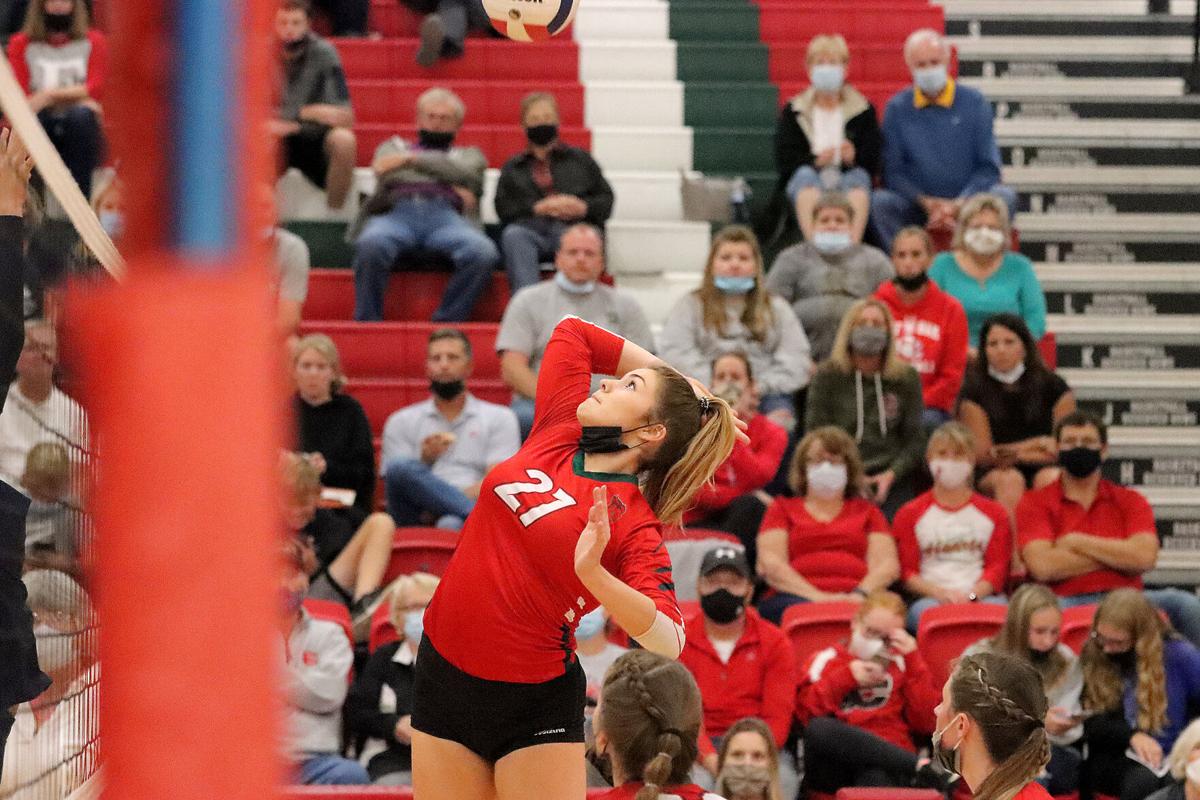 Effingham’s Kennedy Sowell rises for a kill during a volleyball match against Mahomet-Seymour Tuesday, September 21, 2021, at Effingham High School. 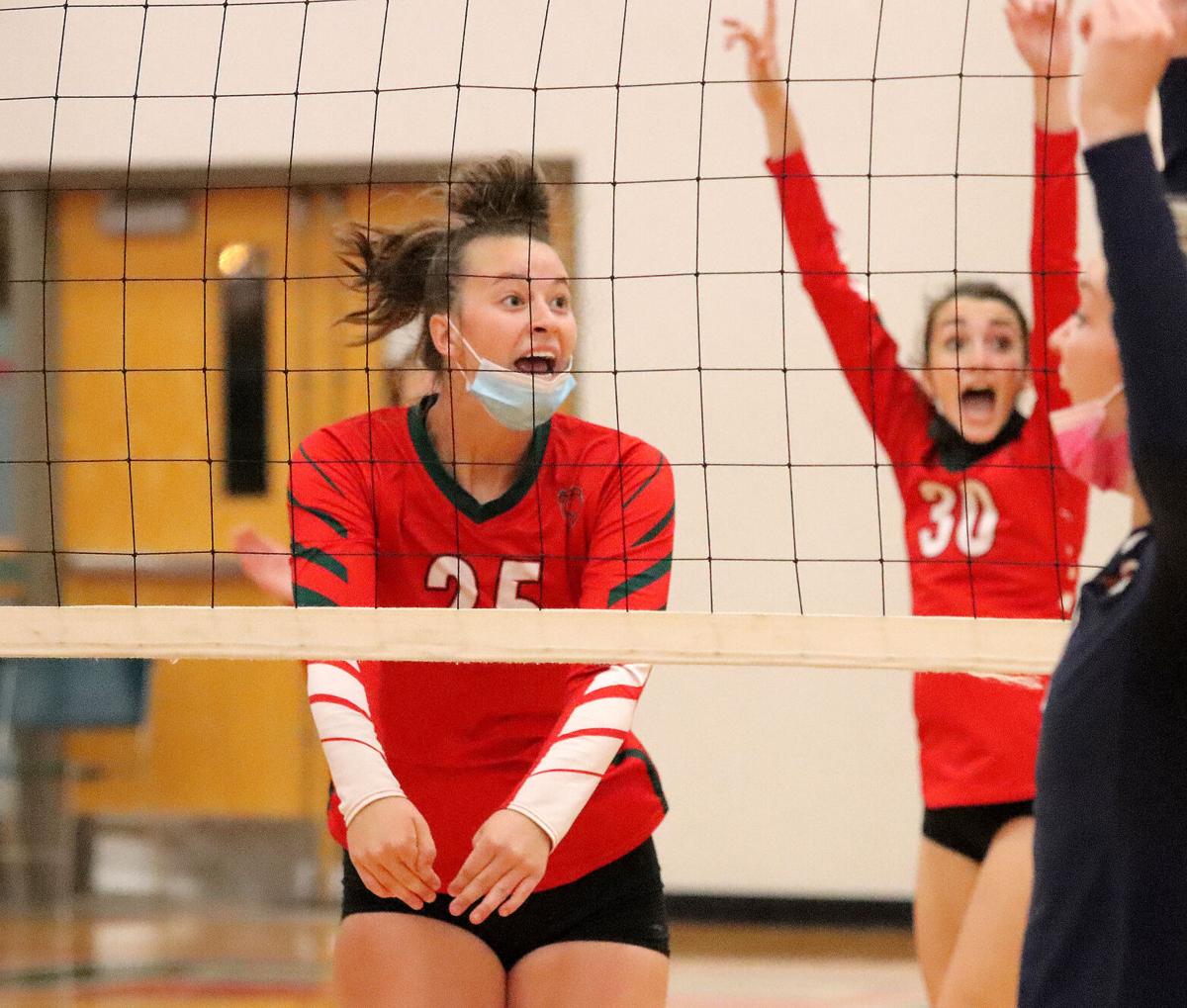 Effingham’s Lexi Chrappa reacts to a call after a block at the net during a volleyball match against Mahomet-Seymour Tuesday, September 21, 2021, at Effingham High School.

Effingham’s Kennedy Sowell rises for a kill during a volleyball match against Mahomet-Seymour Tuesday, September 21, 2021, at Effingham High School.

Effingham’s Lexi Chrappa reacts to a call after a block at the net during a volleyball match against Mahomet-Seymour Tuesday, September 21, 2021, at Effingham High School.

Digging themselves out of holes has defined the Effingham volleyball team this season, and Tuesday was no different.

The Flaming Hearts lost a hard-fought battle to Apollo Conference rival Mahomet-Seymour in straight sets, 18-25, 28-30, but the Bulldogs found it difficult toward the end to put away an Effingham (7-11, 1-4 Apollo Conference) team that had won six straight matches.

"We were down six-or-seven points, and we didn't give up," Flaming Hearts head coach Theresa Vogt said. "We're doing a really good job of digging ourselves out of holes and fighting back. We just can't put ourselves in the holes in the first place. We can hang with anybody in the conference when we're on, but it depends on what happens."

Mahomet-Seymour (13-5, 4-1 Apollo Conference) led 14-7 and 21-16 at two different points during the second, but that never bothered the Hearts. They found a way to claw right back and even take a 26-25 lead that forced a Bulldogs' timeout.

That timeout was just what Mahomet-Seymour needed, though, as head coach Stan Bergman's bunch came out of the huddle and won five of the next seven points to win the set — and match.

What excitement the second set had, the first didn't, as Effingham struggled against a talented Bulldogs team right out of the gate.

The Flaming Hearts trailed 8-1 at the start, but after a timeout, went on to rally off 13 of the next 19 points to tie the set at 14 and shift momentum.

However, that shift was brief. After a Bulldogs timeout, Mahomet-Seymour allowed four more points in the set, thanks to some self-inflicted errors from Effingham that left Vogt questioning her team's decision-making.

"We make silly errors on ourselves, dropping free balls or getting into the net," Vogt said. "I always tell the girls, 'You have to minimize our errors and worry about what we have to do,' but we do it to ourselves most of the time."

Through all of the miscues, though, one bright spot on the night was senior Kennedy Sowell.

Sowell finished with a team-high eight kills to go along with one block.

"Kennedy has done a nice job. Usually, she plays middle, but she's a really big blocker and a really big asset to us," Vogt said. "So, what she's doing right now is playing middle out of the right side position. She's moving all over the court. Not only is she playing middle at some point, but she can also play right-side, which is good because then it gives us a lot of options of where to place her. She can hit a three; she can hit a one; she can hit a slide. It makes her a really dangerous weapon for us."

Typically in the starting rotation, Sowell came off the bench Tuesday night. However, Vogt said that was nothing more than a strategic move.

"It's the way that it goes with the lineups and the setters and the hitters," Vogt said. "All of the girls have particular setters that they like, so we have to set up in a certain order, so that way each girl that hits well off of a certain person; they have to go in order."

The Flaming Hearts look to get back on the winning side of the record book Thursday when they play at Mattoon.