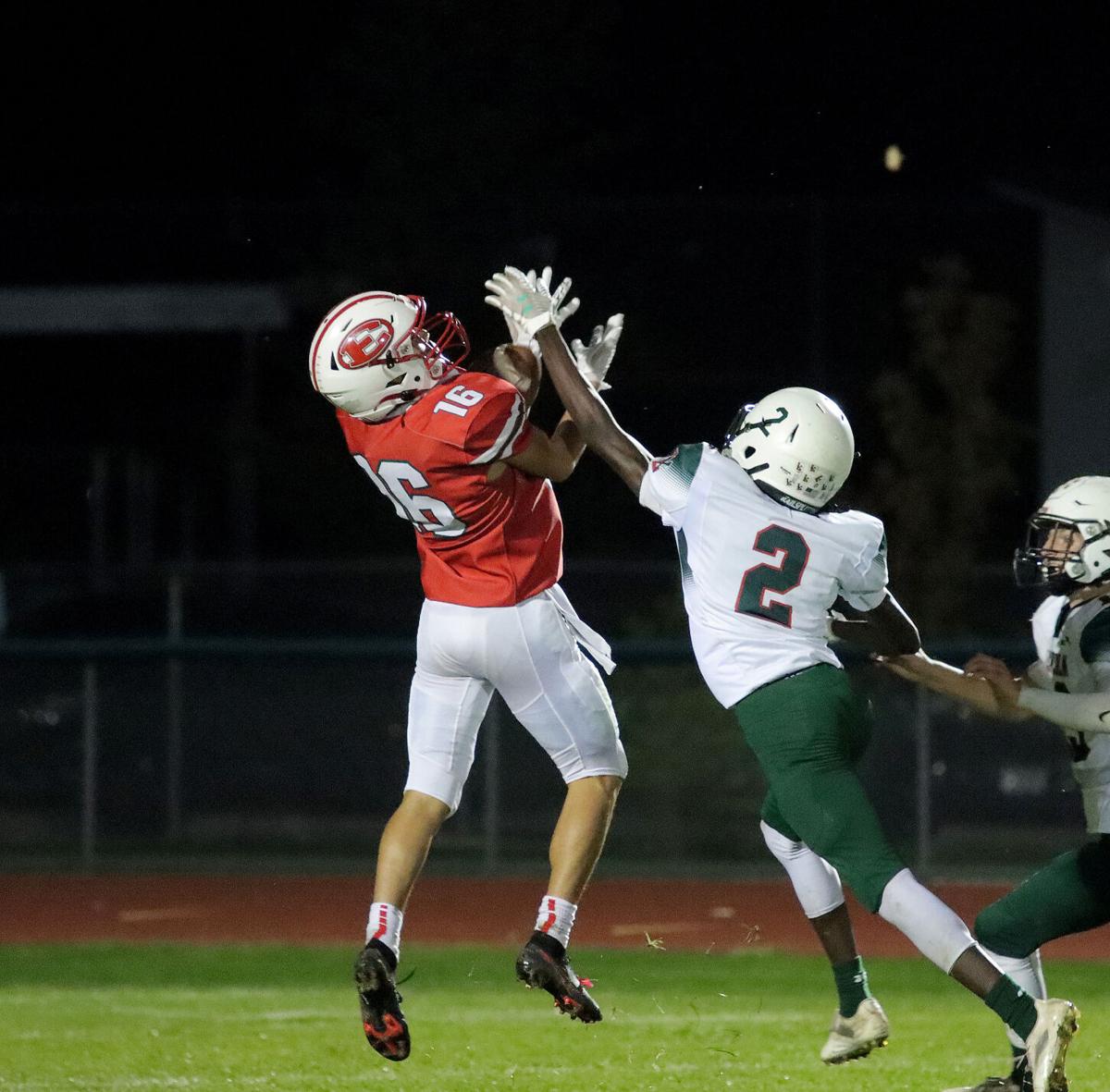 Effingham wide receiver Armando Estrada hauls in a pass during a football game against Lincoln on Friday, October 8, 2021, at Klosterman Field, in Effingham, Illinois. 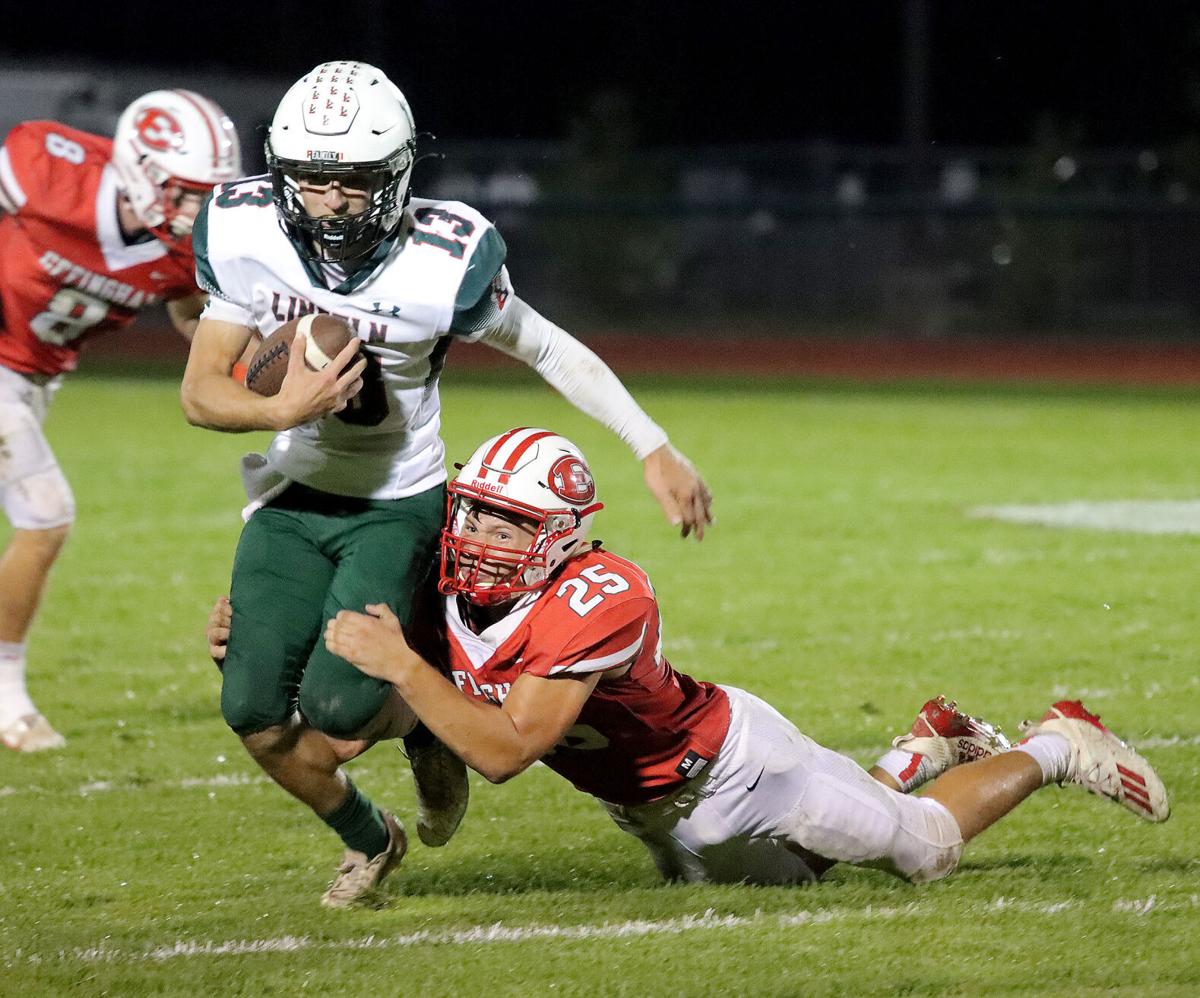 Effingham wide receiver Armando Estrada hauls in a pass during a football game against Lincoln on Friday, October 8, 2021, at Klosterman Field, in Effingham, Illinois.

The Flaming Hearts are flaming hot.

Effingham made it three wins in a row Friday night after its 34-22 win over Lincoln at Klosterman Field. The victory was the Hearts’ first at home this season and was also a game in which they never trailed.

Over the last three weeks, fans have seen this Effingham (4-3, 3-2 Apollo Conference) team continue to improve in nearly every facet of the game, and Week 7 was no different.

Another contest featuring zero turnovers and limited penalties proved to be helpful, as Effingham only committed four penalties for 45 yards.

The Railsplitters, on the other hand, didn’t have that same luxury, as penalties continued to haunt them throughout the game. Lincoln had 14 penalties for 145 yards.

In addition to forcing numerous flags, Effingham’s defense also played a vital role in the win.

The scoreboard may not indicate it, but aside from the 22 points allowed, the defense continuously created havoc, forcing the Railsplitters into tough situations.

Effingham’s run defense allowed 71 yards on 42 carries and one touchdown, including 11 tackles for loss and six sacks.

Where the problems occurred was through the air.

The Hearts allowed 319 passing yards — albeit on 32 attempts — and two scores.

Senior Elijah Pollice threw for all 319 yards, connecting with junior Jaden Leadley on a 33-yard touchdown and sophomore Ki’on Carson on a 15-yard score.

Junior Isaac Decker led the team with 104 yards on six receptions, while Carson had five catches for 82 yards and senior Tony Gandolfi three catches for 71 yards.

Yet, even with the problems on pass defense, Effingham’s offense did end up feeding off of that side of the football.

The Hearts scored on all three first-half drives to take the lead at halftime, with every drive coming after a stop.

On Lincoln’s opening possession, the Railsplitters marched down the field only to come away with nothing. An 8:13, 20-play drive ended with Effingham forcing a turnover on downs.

From there, Effingham also used a long drive — which lasted nearly three minutes into the second quarter — to draw first blood. Junior running back Evan Waymouth ended the 14-play drive by running the ball into the endzone from 35 yards out to make it 7-0 after junior Armando Estrada’s extra point attempt was good.

Then, following the second Hearts’ defensive stand, it resulted in another touchdown, but it didn’t take as long as the previous score.

On the first play from scrimmage, junior quarterback Tanner Pontious found Estrada for a 36-yard touchdown that doubled the score to 14-0.

Pontious finished his evening with 120 yards — all to Estrada — on seven attempts. Estrada also caught a 58-yard pass that set up a Pontious six-yard-run, which made the halftime score, too.

Meanwhile, on the ground, Effingham rushed for 183 yards on 36 carries. Junior John Westendorf led the team with 95 yards on 16 carries and one touchdown.

Now, the Hearts look ahead to a Week 8 tilt with Breese Mater Dei — on the road — to try and make it four victories in a row. However, it won’t be an easy task, as the Knights are ranked second in Class 2A with a perfect 6-0 record.