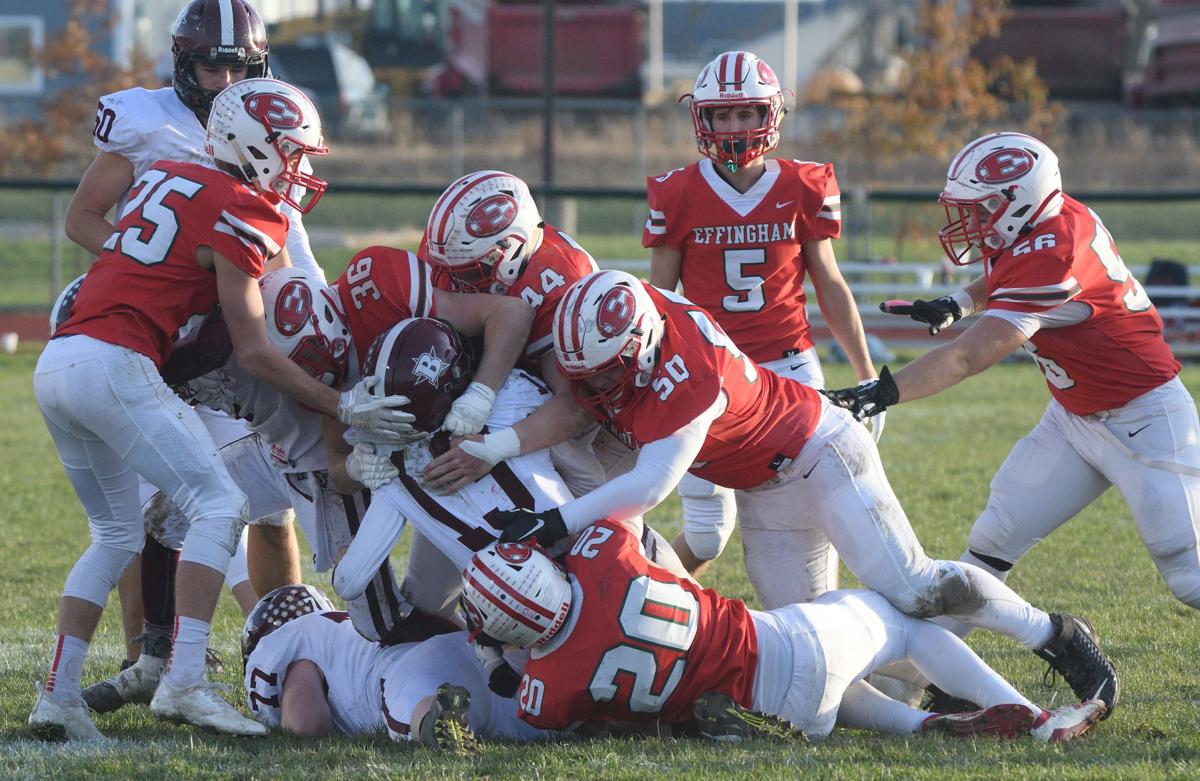 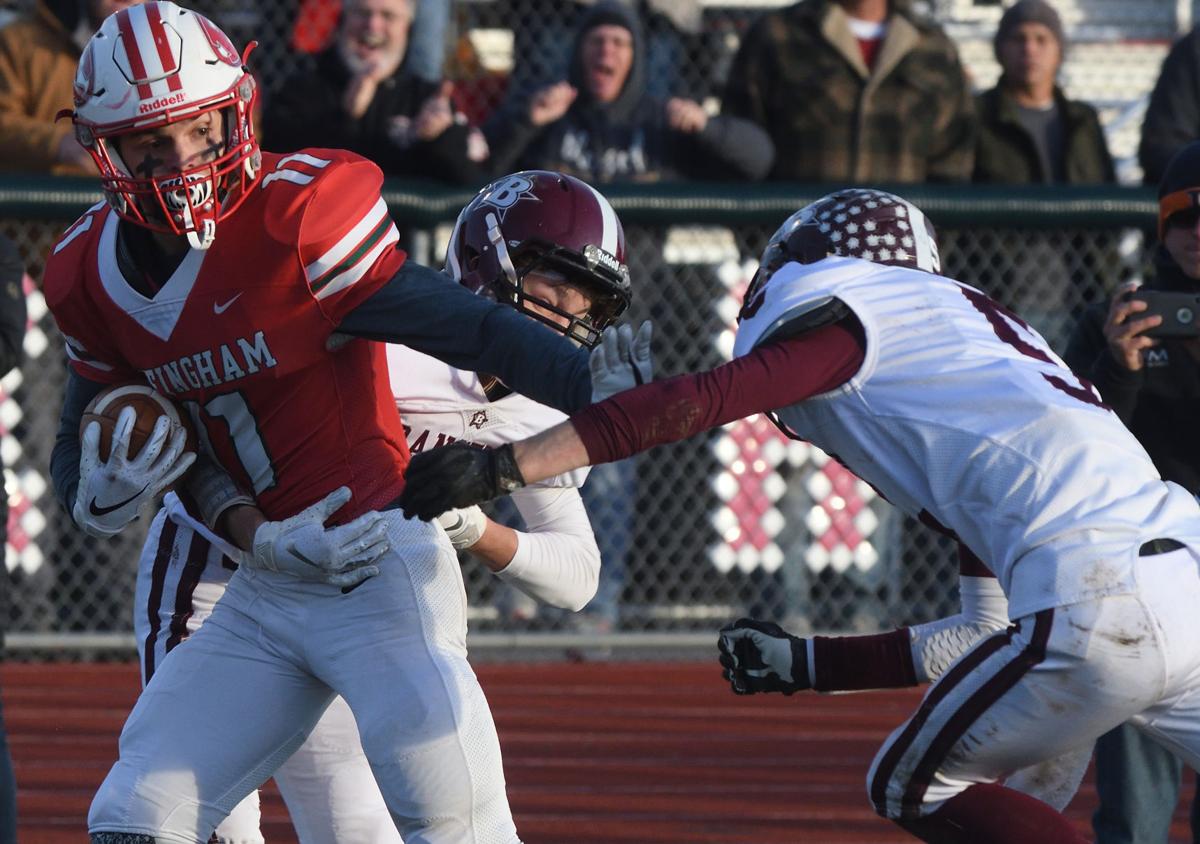 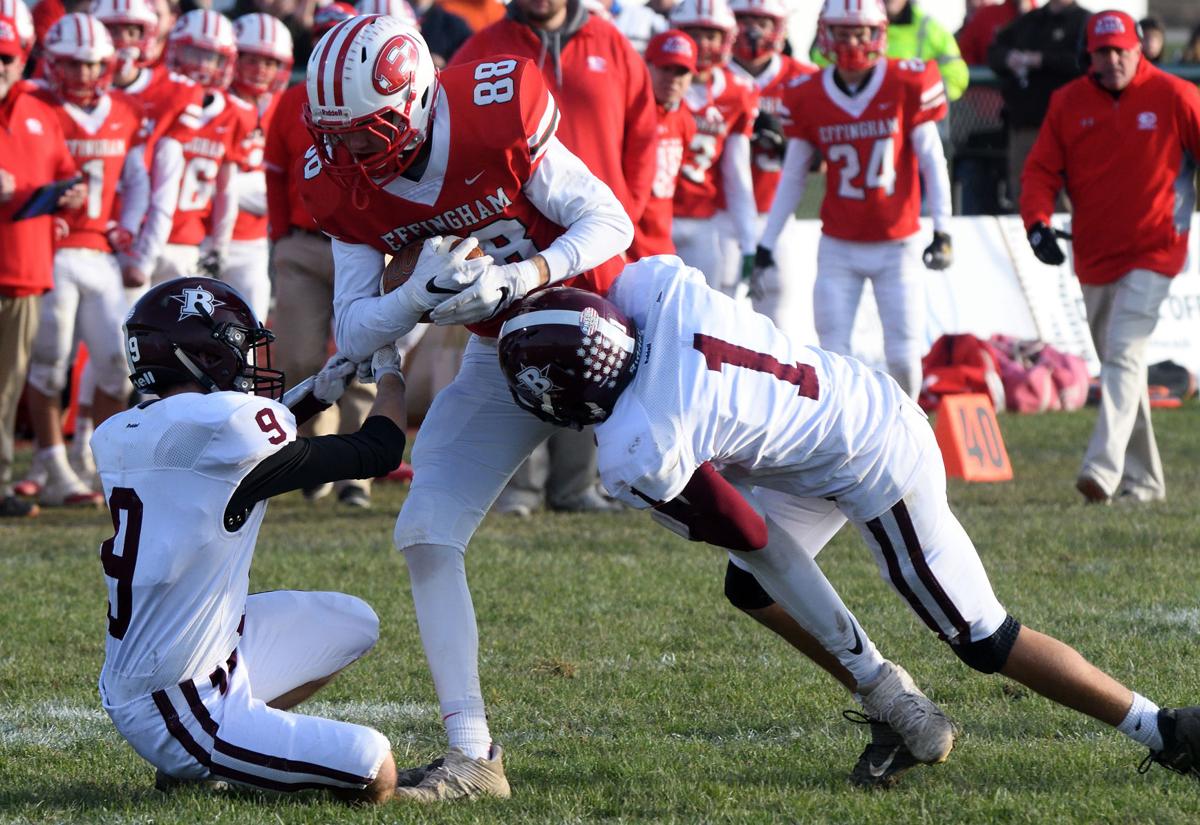 The Effingham Flaming Hearts scored 42 unanswered points Saturday to defeat Benton 42-7 to advance to the IHSA Class 4A Football quarterfinal.

“Tonight, offensively, we were hit and miss. They’ve got some big guys up front who can play. We live on explosives, and when the wind gets going like that up and down the field, those explosives can be hard to find.”

This marks the second season in a row the Flaming Hearts have advanced to the quarterfinal, after not doing so since 1987. This group also became the first Flaming Hearts team to reach 10 wins in the program’s history.

After the Hearts were forced to punt after the first possession, Benton was able to get on the board after the Benton ball carrier fumbled, but quarterback Keegan Glover picked up the fumble and ran it 80 yards for a touchdown to take a 7-0 lead with seven minutes, 23 seconds remaining in the quarter.

The Flaming Hearts worked its way down to the Benton 15-yard line attempting to tie the game, but the Hearts fumbled with Benton recovering on the play.

However the Effingham defense forced a three-and-out forcing a punt. But the Rangers went for a fake punt and didn’t get it, giving the Hearts possession just outside of the red zone.

After Nate Shackelford ran for a first down, the Flaming Hearts were forced into a fourth-and-9, when Shackelford found Holden Lewis for an 11-yard touchdown, despite the ball coming loose and was ruled a touchdown to tie the game at seven.

On the ensuing Benton possession the Hearts defense came up with big plays once again, this time with tackles for loss from Mason Hasty as well as Jacob Stoneburner to force a Benton punt.

From the Benton 47-yard line, Shackelford found Kollin Waymoth for a 25-yard strike. Shackelford then found Jett Gillum for a 16-yard pass down to to the 2-yard line.

“We’ve got a number of guys you have to defend,” Hefner said. “We’re not a big spread team, but we can do that and it creates lanes for our quarterback. He’s a dual threat to run it and throw it. He’s become another explosive for us.

“You saw our tight ends this week. Our tight ends haven’t had many touches but we’ve got two tight ends who can go get it. We have a lot of things you have to defend.”

After a run was stopped short, Logan Brown took the handoff for a 3-yard touchdown to take a 14-7 lead with just over seven minutes remaining in the second quarter.

“We wanted to get [Brown] back in the flow of the game,” Hefner said. “I thought he looked pretty good, which was good to see because that’s important going forward, especially if we can get back going up front.”

On the next Benton drive, the Hearts defense forced a fumble on third-and-17 with the recovery by Hasty at the Benton 30-yard line with just under five minutes remaining.

With 3:33 remaining Shackelford burst through the Benton defenders for a 25-yard touchdown run to go up 21-7.

The Flaming Hearts defense remained hot the next time out, getting a sack on third-and-18 to force a punt. But the punt was a short one at 19 yards.

With just over a minute remaining, Shackelford found Tristin Duncan, who cut across the middle of the field, making multiple tacklers miss from the 33 down to the 5-yard line.

After a run was stopped short, Shackelford found Waymoth for an 8-yard touchdown off play action to go into halftime up 28-7.

At halftime. the Rangers switched their offense from a spread offense to wing T offense.

While the Rangers offense still wasn’t clicking, the defense stood tall, forcing Effingham into a three-and-out on the first possession of the half. But the snap was high, with the only option being to fall on it to avoid another Benton scoop-and-score.

But after Hayvin Prather came up with a big sack on third down gave the Hearts the ball back via punt.

On a third-and-11, Shackelford found Jacob Briggerman for 12 yards, followed by an 11-yard rush from Chase Woomer to the Benton 44-yard line.

On the next play, Shackelford kept the ball on a read-option and took it 44 yards through the defense to the house for a score to go up 35-7.

The Hearts forced a punt from Benton after another sack on third down from Prather.

After a pair of first down runs from Brown, Shackelford found Briggerman for a 22-yard touchdown to make it 42-7.

With Benton in desperation time, Benton’s Glover threw a ball up down the left sideline only to be picked off by Parker Wolfe for his tenth interception of the season, tying a school record.

“He’s good,” Hefner said. “He has a unique ability to play the ball. His ball skills ans awareness for playing the game are outstanding.”

The Hearts will have a chance to improve advance to the semifinal next week then they travel to take on Fairbury (Prairie Central) Saturday. Kickoff is slated for 2 p.m. with admission being priced at seven dollars.