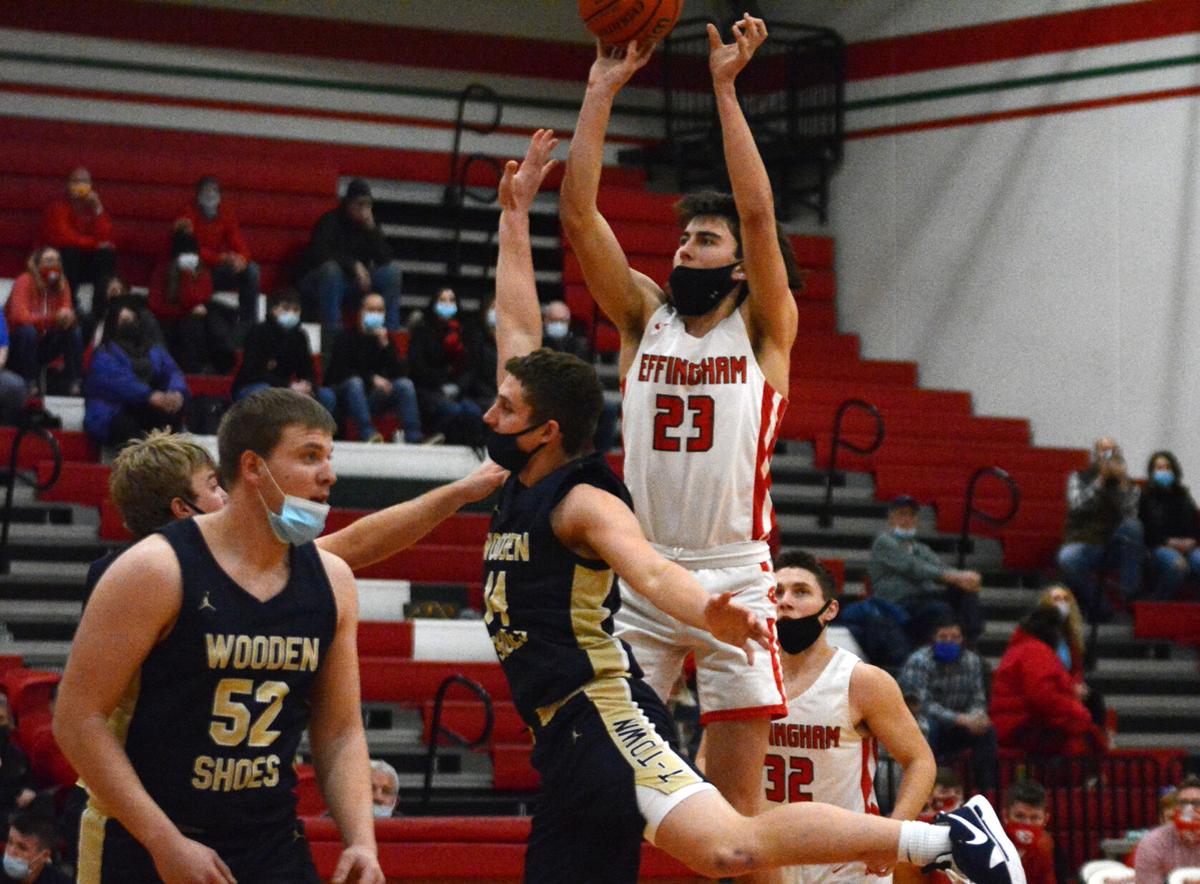 Effingham’s Nate Thompson (23) shots the ball over the outstretched arm of Teutopolis’ Evan Wermert (14) in the team’s win over Teutopolis Tuesday night at Effingham High School. 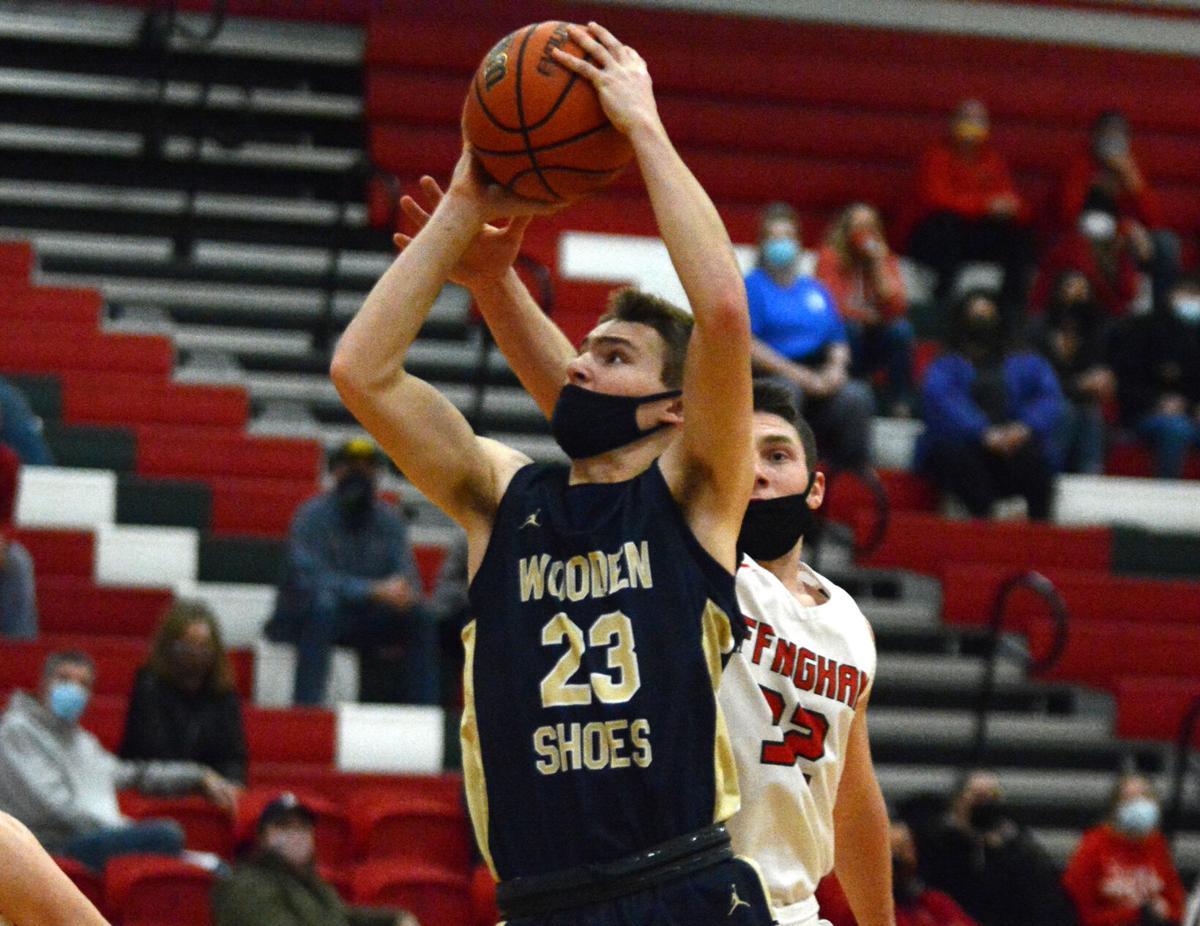 Effingham’s Nate Thompson (23) shots the ball over the outstretched arm of Teutopolis’ Evan Wermert (14) in the team’s win over Teutopolis Tuesday night at Effingham High School.

used a hot shooting night from Nate Thompson, scoring 18 of his 25 points in the first half to help defeat the Teutopolis Wooden Shoes Tuesday 68-54.

While Thompson and Parker Wolfe combined for 40, it was players like Jacob Stoneburner, Garrett Wolfe and Dalton Fox who stepped in and took some pressure off of the team’s usual top scorers.

“They’re all skilled players and all have the ability to hit shots,” said Effingham head coach Obie Farmer. “Sometimes they just get less of them because of the two guys they’re playing with. Even though they might not put a lot of points in, we’re looking at their efficiency. If you can get six points off three shots, that’s pretty good.”

It was a far cry away from the usual Effingham versus Teutopolis matchup, as at times the gym was eerily quiet as opposed to having both sides of the gym packed.

“It seems like every time there’s a big crowd, T-town plays off of it really well,” Farmer said. “Some of our guys today during school were saying it was going to be great that they didn’t have that crowd to feed off of. The energy our guys brought kind of flipped the coin on them and made it an advantage for us.

“But it is really weird. Typically, we’re playing St. Anthony, we’re playing T-town at capacity with people standing on the sidelines and it’s because it’s two really tough teams that play basketball the right way at a really high level.”

After the game, Teutopolis head coach Chet Reeder put the blame on his shoulders for the team’s lack of execution.

“I told them in the locker room; this is on me,” Reeder said. “I have not been good enough in practice. Our lack of execution is 100 percent on me. I’ve got to be a better coach for them and perform better for them. It’s not on them, this one is on me.”

Jacob Stoneburner got the Flaming Hearts on the board first with a pull up three.

Parker Wolfe was able to get a layup to go through contact after a steal that he took end to end. Outside of those six points, the rest of the scoring came from Thompson in the opening quarter on their way to a 17-10 lead at the end of one.

Thompson scored the first five points of the second quarter as well, as the Hearts opened up a 22-12 lead.

But the Wooden Shoes charged back, with Evan Wermert, Jordan Hardiek and Evan Addis all drilling threes to go with a layup from Max Niebrugge to help cut the deficit to three.

The Wooden Shoes did make the Flaming Hearts work for their shots, as almost all of Effingham’s look came with a hand in the face of the shooter.

“You’ve got to make stuff hard for them,” said Reeder. “They’re going to score. It’s about making them difficult shots. If they make a difficult shots, tip the cap to them. But we got them going early and gave them three and-ones in the first half between Nate and Parker. You can’t give them rhythm with stuff like that.”

The Flaming Hearts answered right back, with Stoneburner hitting his second three of the game, followed by a three from Dalton Fox to make it a nine-point lead.

Hardiek was able to get another three to foll before a layup from Wermert in the closing seconds was able to make it a five-point game at halftime, 34-29 in favor of the Flaming Hearts.

Thompson started the second half off with a putback before Garrett Wolfe got layups to fall on back-to-back possessions to put the Flaming Hearts up 40-29. Garrett Wolfe scored eight of his nine points in the third.

“There’s not enough you can say about [Garrett Wolfe],” said Farmer. “I don’t know if there’s a tougher kid on the court pound for pound, attacking the basket against bigger guys and finding opportunities to score. It was a lot of help, especially when they were running tough defense on Parker.

“They were putting all of their attention on Parker and Nate, so when they do that, it gives opportunities for Dalton and Garrett and Stoney.”

Stoneburner was able to connect on his third three of the night to extend to help extend the Flaming Hearts lead to 13 going into the fourth.

Dalton Fox was able to connect on his second made three of the evening after a layup from Teutopolis’ Niebrugge to open the quarter.

With the Flaming Hearts up 14, the Wooden Shoes started to foul around the three-minute mark, hoping for some missed free throws to turn into quick buckets on the other end. But the Flaming Hearts drained seven of their 10 free throws in the quarter, with Parker Wolfe draining the final four to give them their biggest lead of the night at 17.

Joey Ruholl scored a three to make it 68-54 with time winding down.