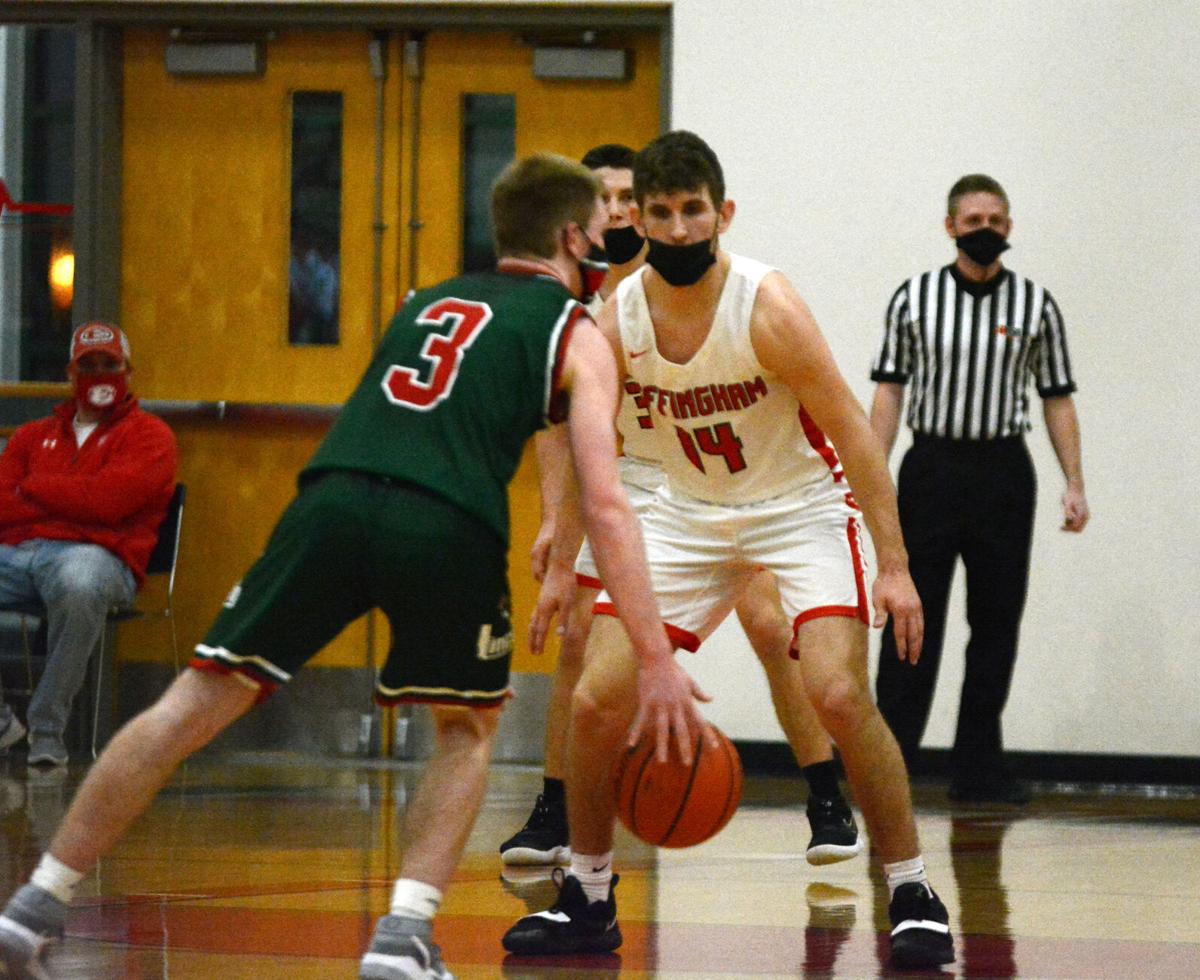 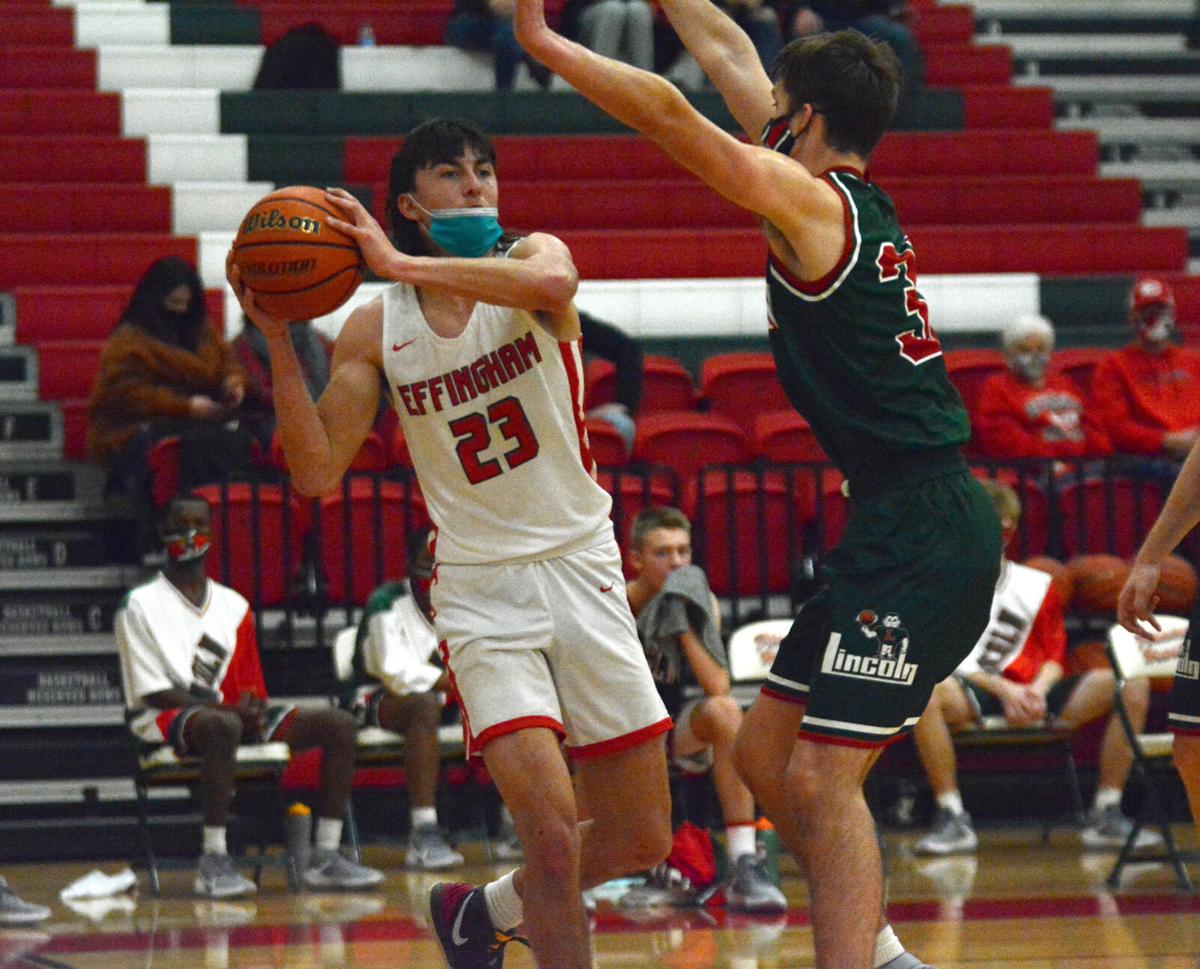 Nate Thompson makes a pass falling out of bounds guarded by Lincoln’s Jaden Kopp in the team’s overtime win over the Railsplitters Friday at Effingham High School.

Nate Thompson makes a pass falling out of bounds guarded by Lincoln’s Jaden Kopp in the team’s overtime win over the Railsplitters Friday at Effingham High School.

That was absolutely the truth at Effingham High School Friday evening, as the Effingham Flaming Hearts used a game-high 27 points from senior Parker Wolfe to help withstand and defeat the Lincoln Railsplitters 53-52 in overtime to remain undefeated.

“I didn’t realize he had 27,” Effingham head coach Obie Farmer admitted. “I knew he was available, in big moments we had him. He found the opportunity to get a bucket when we needed one, and that’s what players like that do. When your team needs a basket, players like Nate and Parker make themselves available for us to be able to score when we need to.

The game started with both teams exchanging big buckets. Through one quarter, all but one of the field goals made by either side was a 3-pointer. Even on the field goal that wasn’t a three, Dylan Singleton got the basket to go with a foul and converted at the line, so the Railsplitters still got three out of the play.

The Hearts led 12-9 at the end of one, with Wolfe hitting two 3-pointers, with Garrett Wolfe and Dylan Fox adding the other two threes.

With the disciplined defense from the Railsplitters, the Hearts had to be patient, trying to avoid bad passes, as the quick rotations from the Lincoln defense could make them pay.

“We talked a lot about being patient this week,” Farmer said. “Playing against teams like T-Town and Lincoln, we knew this was a big week for us with two marquee teams in our conference. They’re both really good and know how to play the game. They’re tough. It’s hard to skip the ball against them because they read everything. As soon as you look in a direction, the defense shifts.

“We talked about patience and finding our shots in the flow of the offense and they did a good job of that. We ran 10 times as much off as we usually do in a possession to find the right shot rather than the first shot and that worked out pretty well for us tonight.

Nate Thompson made a huge defensive play to start the second quarter, blocking a shot from Singleton against the glass that turned into a Parker Wolfe three down the other end to go up 15-9.

“Nate did a really good job helping off and helping the gaps,” Farmer said. “A lot of people talk about points and how great it is to get to 1.000. But we have a lot of guys that do the stuff that doesn’t get in the book. Nate blocking shots, playing really good helpside. Even if he doesn’t get a block, now they’re thinking about him. He was doing a lot of good things for us.”

Jacob Stoneburner got a layup to go to go up 17-10, but Singleton answered with a layup off a spin move.

Nate Thompson converted on consecutive layup attempts to make it a 9-point lead before another big three from Garrett Wolfe put the Flaming Hearts up 26-15 going into halftime.

At the start of the third, it looked like the Hearts were going to start running away with it, as Garrett Wolfe got the first three points for the Hearts to start the second half, as they built the lead up to 16 after two more threes from Parker Wolfe.

“Garrett has come a long way since last year. He’s played a lot of basketball and has matured a lot,” Farmer said. “But you look at the environment he grew up in. He goes out to the shed and plays basketball with his brothers and he just gets beat on. So when he comes out and plays with these guys, it’s nothing new.”

But Lincoln’s Landon Hullinger got hot, draining three consecutive 3-pointers to cut the Effingham lead to 10 with just over two minutes to go. But with one minute to go, Thompson got a layup to fall, putting the Hearts up 41-29.

The fourth quarter proved to be the Singleton show, as he helped cut the deficit down to five after some Flaming Hearts turnovers.

“We had the 12-point lead going into the fourth,” Farmer said. “But when you’re playing teams like Lincoln or T-Town, 12 points is nothing. They can get steals and tips and everything else and capitalize on their possessions. If you foul them, they won’t miss free throws.”

With the game 41-36, a foul was called on Stoneburner and was assessed a technical foul for saying “what” with disbelief. It was already a 1-and-1 opportunity for Singleton and with the technical on top of it, gave Singleton four free throws. He drained all of them to make it a one-point game with two minutes to go.

Lincoln’s Elijah Police hit what, at that point, was the biggest shot of the night; a 3-pointer to put the Railsplitters up two with 1:47 to go. But as big time players do, Parker Wolfe responded with a layup next time down to tie the game at 1:22. Lincoln held for last shot, but didn’t get a shot off.

Since there is no jump ball this season due to COVID-19, first possession of the second half was determined on a coin flip, which Effingham won.

That resulted in a big and-one converted by Parker Wolfe to go up 46-43 with 3:40 remaining.

The teams exchanged layups, with Singleton making one for Lincoln and Thompson answering with one of his own for Effingham.

With the score the same, Stoneburner went to the line following a rebound on the defensive end for a 1-and-1. He missed the free throw, but hustled for his own rebound, quickly giving it back to Parker Wolfe.

Wolfe made one of the two free throws to give the ball back to Lincoln down four with seven seconds left. Farmer instructed his players to let Singleton go and not even go near him to risk a foul on a 3-pointer. Singleton made the three with a second remaining, but the Flaming Hearts let the clock run out to win 53-52.