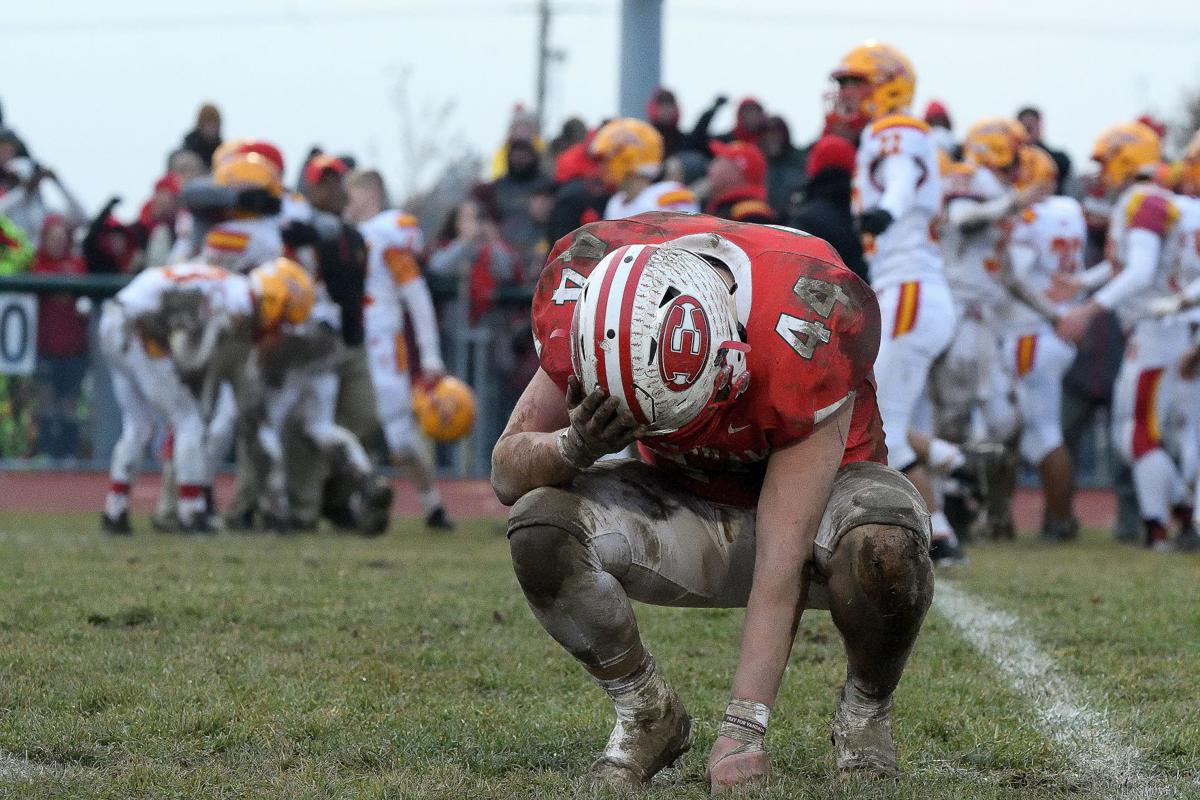 Effingham’s Jacob Stoneburner takes a moment to himself after the Hearts’ Class 4A semifinal 20-17 overtime loss Saturday afternoon at Klosterman Field. 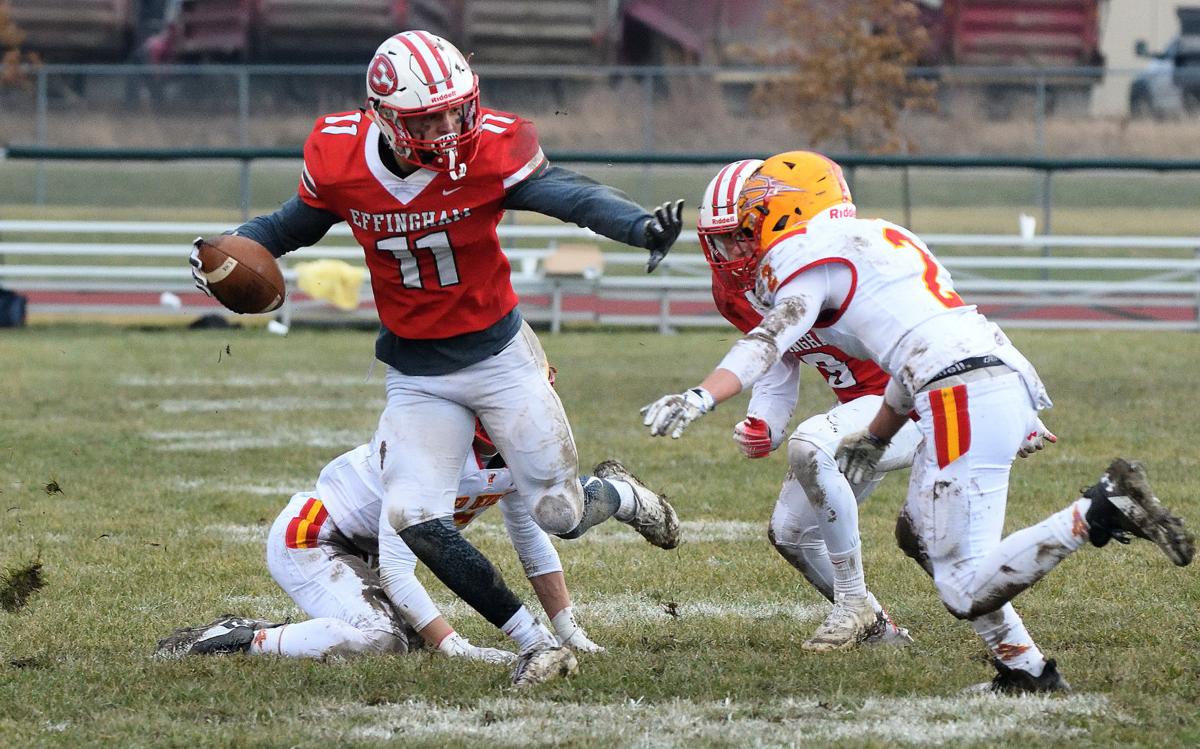 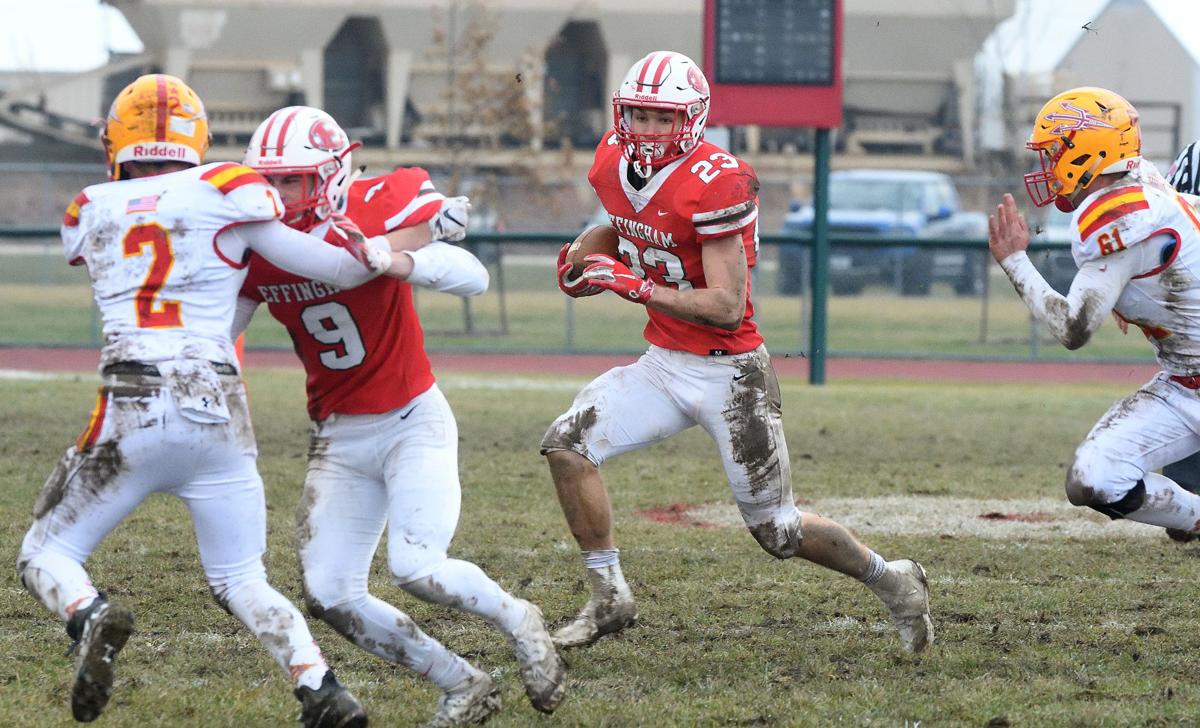 Effingham’s Jacob Stoneburner takes a moment to himself after the Hearts’ Class 4A semifinal 20-17 overtime loss Saturday afternoon at Klosterman Field.

The Effingham Flaming Hearts’ playoff run came to an end Saturday to the hands of the Murphysboro Red Devils 20-17 in overtime.

The Flaming Hearts had a chance to get a quick score on the board with its first possession, but just missed on a pass from Nate Shackelford to Tristin Duncan.

But the Effingham defense forced a punt on the ensuing Murphysboro possession. After the Hearts started the next drive on the Effingham 29-yard line, the exchange on the snap was bobbled and recovered by the Red Devils.

“I don’t know what the issue was,” Hefner said in regard to the snaps. “It’s been that way the last few weeks.”

Murphysboro quarterback Jamarr McZeke found tight end Logan Sullivan for a 21-yard completion. But the Effingham defense stood tall, forcing a turnover on downs on a tackle behind the line from Mason Hasty.

But the Flaming Hearts offense couldn’t get anything going on offense following the turnover, with Murphysboro’s Aiden McNitt sacking Shackelford on the one-yard line to force fourth down.

The snap on the punt was high and went over Dawson Whitten’s head and out of the back of the end zone for a safety to put the Red Devils up 2-0.

The Red Devils hit another big pass play down to the two-yard line after receiver Hunter Meade got away with a push off.

On the first play of the second quarter the Red Devils cashed in on a two-yard touchdown run from McNitt to go up 8-0.

The Flaming Hearts were forced to punt on the ensuing possession after more difficulties with the snap. The snap on the punt was high and forced Whitten to run back to recover the snap. Somehow Whitten was able to get the punt off to the Effingham 41-yard line.

The Red Devils worked the ball into the red zone, but the defense stood tall once again with a fourth-and-1 stop on the Effingham 11-yard line. But the offense continued to sputter, being forced to punt back to Murphysboro on their own 37-yard line.

The Red Devils were able to put up another score before the end of the half with a five-yard run from Clark. But the 2-point attempt was no good to put the Red Devils up 14-0 at the half.

With the issues handling the snap, the Flaming Hearts came out with more looks out of the shotgun formation and it paid off on the very first drive. Shackelford found Cameron Kalber and Jett Gillum on a pair of first-down passes before finding Duncan for a 33-yard touchdown to get on the board at 14-7.

“We went out of the gun a little bit more to try and limit the issues we’ve had,” said Hefner.

The defense forced a punt to give the ball back to the Flaming Hearts down a score late in the third, but turned it over after suffering a sack on fourth-and-9.

But the Flaming Hearts defense came away with a turnover after an interception from Gunnar Franklin.

After Chase Woomer got 14 yards for a first down, Shackelford found Duncan for a 60-yard touchdown pass. After a false start pushed the extra point back, Ivan Angel put the kick through the uprights to tie the game at 14 with 8:40 remaining in the contest.

Effingham had a chance to go down and score after forcing a punt on fourth-and-9 and started the drive on their own 23-yard line.

Looking like he was going to take a sack attempting to extend the play to his left, Shackelford found Gillum on a shovel pass down to the six-yard line.

But on second-and-goal from the six with less than a minute to remaining, the exchange between the center and Shackelford was bobbled from under center with the Red Devils taking possession and forcing an overtime.

“You have the same issue in the spread,” Hefner said.

Both teams got the ball from 10 yards out with Effingham going first. Logan Brown picked up five yards on first down but was ultimately held to a field goal to give the Flaming Hearts its first lead of the game at 17-14.

The Flaming Hearts end the season at 11-2.