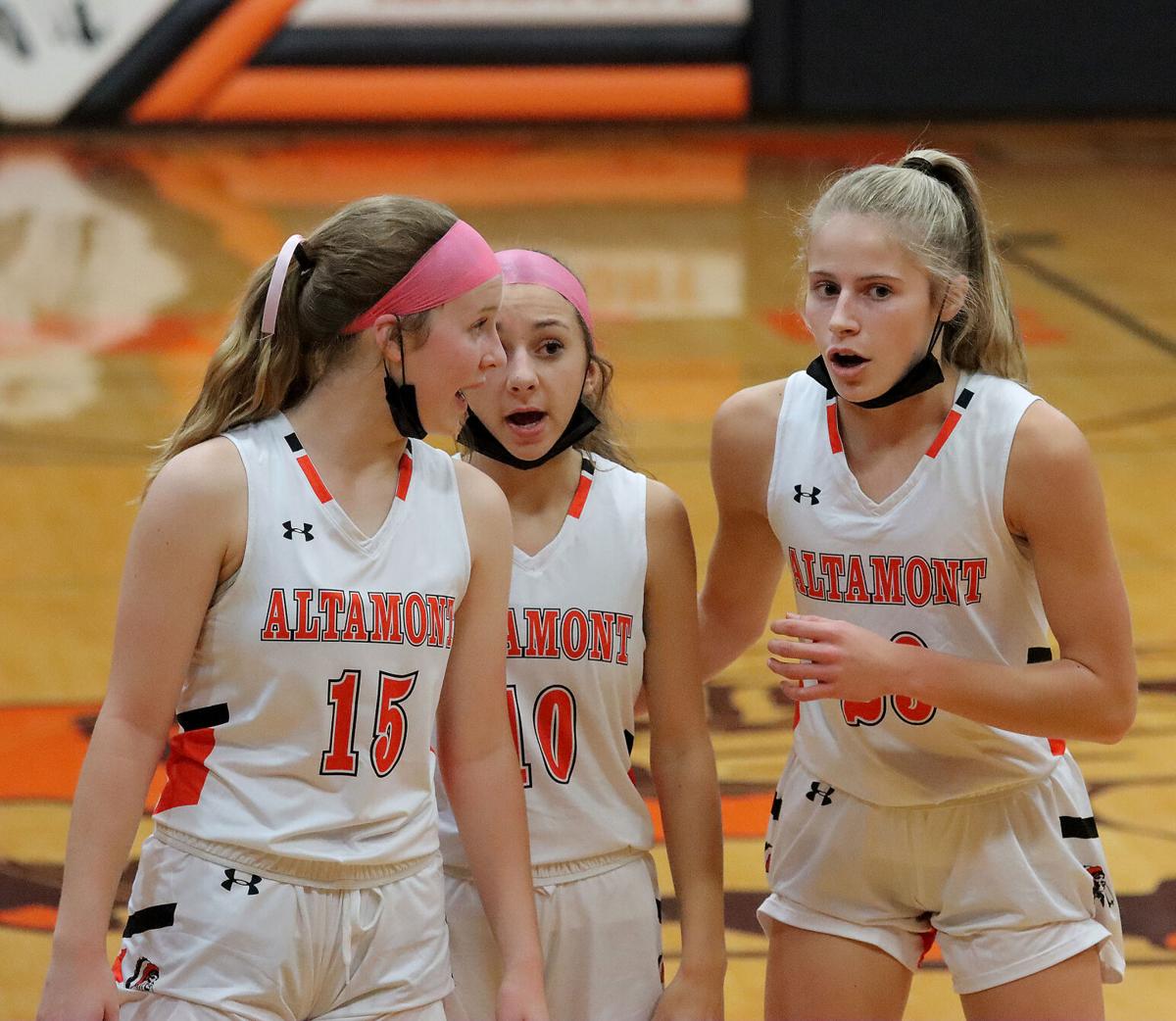 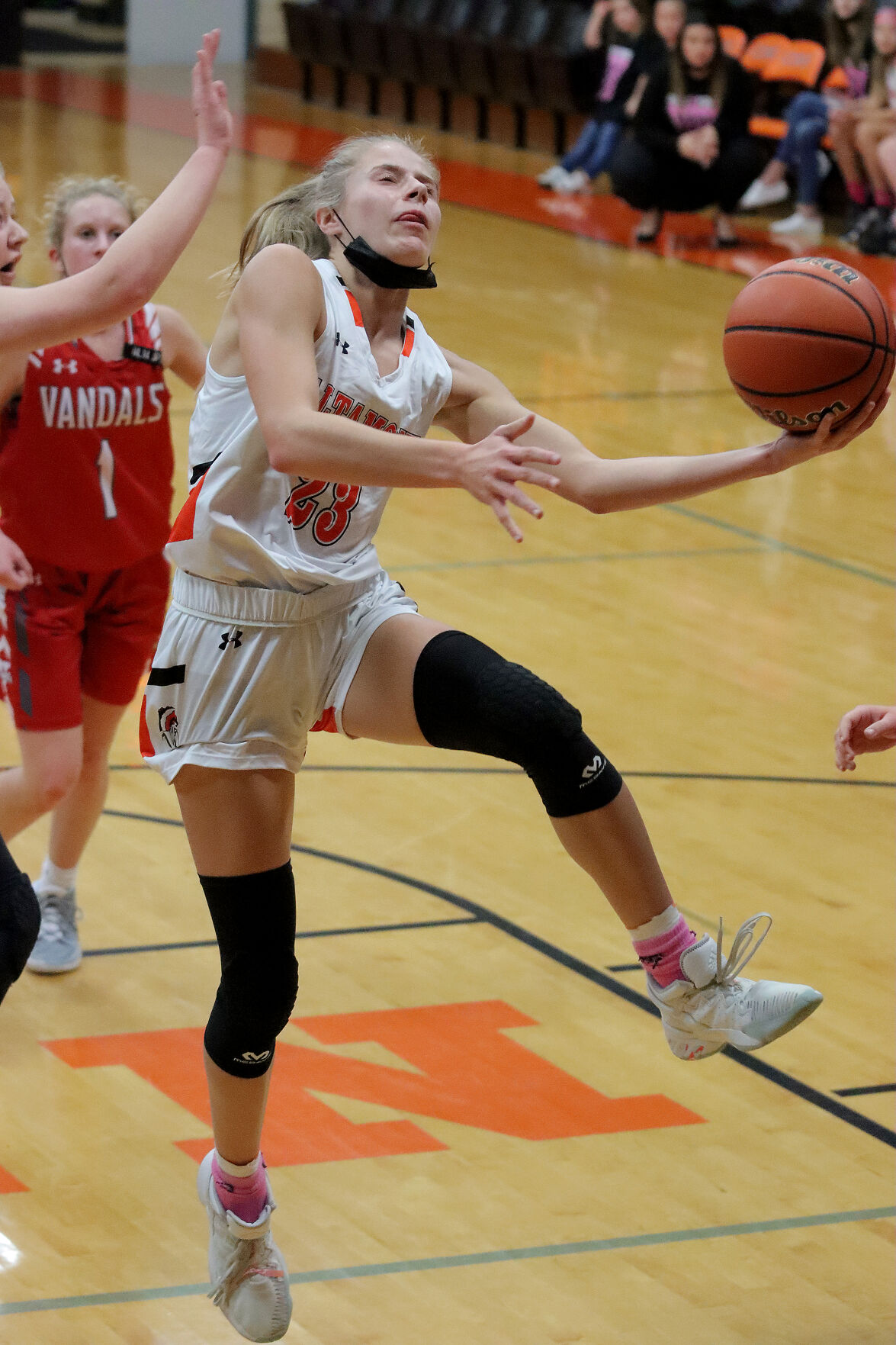 Altamont’s Grace Nelson (23) glides to the rim for a layup attempt during a girls basketball game against Vandalia, on Tuesday, at Altamont Community High School.

Altamont’s Grace Nelson (23) glides to the rim for a layup attempt during a girls basketball game against Vandalia, on Tuesday, at Altamont Community High School.

She picked up right where she left off.

Altamont sophomore Grace Nelson ended her abbreviated freshman season averaging 28.4 points per game, and she didn't miss a beat when she opened her sophomore campaign Monday against Vandalia. Nelson scored 42 points in the Lady Indians 83-57 win.

Scoring in a variety of different ways, Nelson found ways to find the bottom of the net either by driving to the rim, shooting a long-range jumper, or drawing a foul and converting at the free-throw line.

"First game, I came out strong," Nelson said. "My shots were on and I've been working on them a lot."

Yet, even with the Vandals in foul trouble seemingly throughout the game, they still made the Lady Indians work, especially in the first half.

Altamont (1-0) led by two points after the first quarter and one point at halftime, as Vandalia continually made it difficult for the Lady Indians to break away.

The Vandals always seemed to have an answer in the first half and the end of the first quarter was one of them.

With time ticking away, junior Megan Lupton cut the Altamont (1-0) lead to two, 16-14, after she shot-faked, dribbled inside the three-point line, and made a mid-range jumper just as the buzzer sounded.

Lupton's shot went on to give Vandalia the momentum it needed heading into the second quarter, too. A period that saw the visitors take its first lead of the contest, after sophomore Katie Eckhardt knocked down a deep two-pointer, with 6:25 left, to push the Vandals ahead, 18-16.

However, it wouldn't be the last time the lead changed hands for the guests.

Toward the end of the quarter, the Vandals tied the game at 29 before a Lupton layup made it 31-29.

All of a sudden, the tide shifted, but it was only for a brief moment.

Trailing by three, 32-29, it didn't take long for Altamont to retake the lead. After Nelson knocked down a pair of free throws to make it 32-31, she then came up with a steal shortly after that, which led to a mid-range jumper to make it 33-32, ending a first half that saw Lurkins' team play frantically at times.

"First half resulted from neither team having any seniors, so it was a bit of inexperience," Lurkins said. "Everybody was playing hard; it was trying to find your groove and trying to take that leadership and see what style you're going to play."

Once the second half started, though, a light flickered on in, and the results followed suit.

Altamont forced 11 turnovers in the second half, leading to them getting into a better groove offensively, turning a close contest into a blowout.

"The girls did a great job of listening and understanding the defensive adjustments that were made for us at halftime and coming out and executing those," Lurkins said. "Making those defensive adjustments stopped some of those runs where we were getting out of position in the first half and those changes allowed us to create a little more on offense. We did a good job of keeping everything spread and passing the ball, showing the ball, and creating when we needed to."

But, it wasn't only the defense.

Six different Altamont players found themselves in the scoring column by night's end, with three of the six reaching double figures.

Adding to Nelson's banner night were sophomores Claire Boehm, who had 10 points on 2-of-7 shooting, and Peyton Osteen, who pitched in with 15 points. Osteen shot 3-of-10 from behind the 3-point line, but to her coach, what was more intriguing was how she played down low.

"Peyton often has to play out of position with some mismatches," Lurkins said. "Normally, she's outsized and she's doing a great job of being able to find the baskets when she's down inside and then popping back out and having one of the purest follow-throughs and quick releases on her shot."