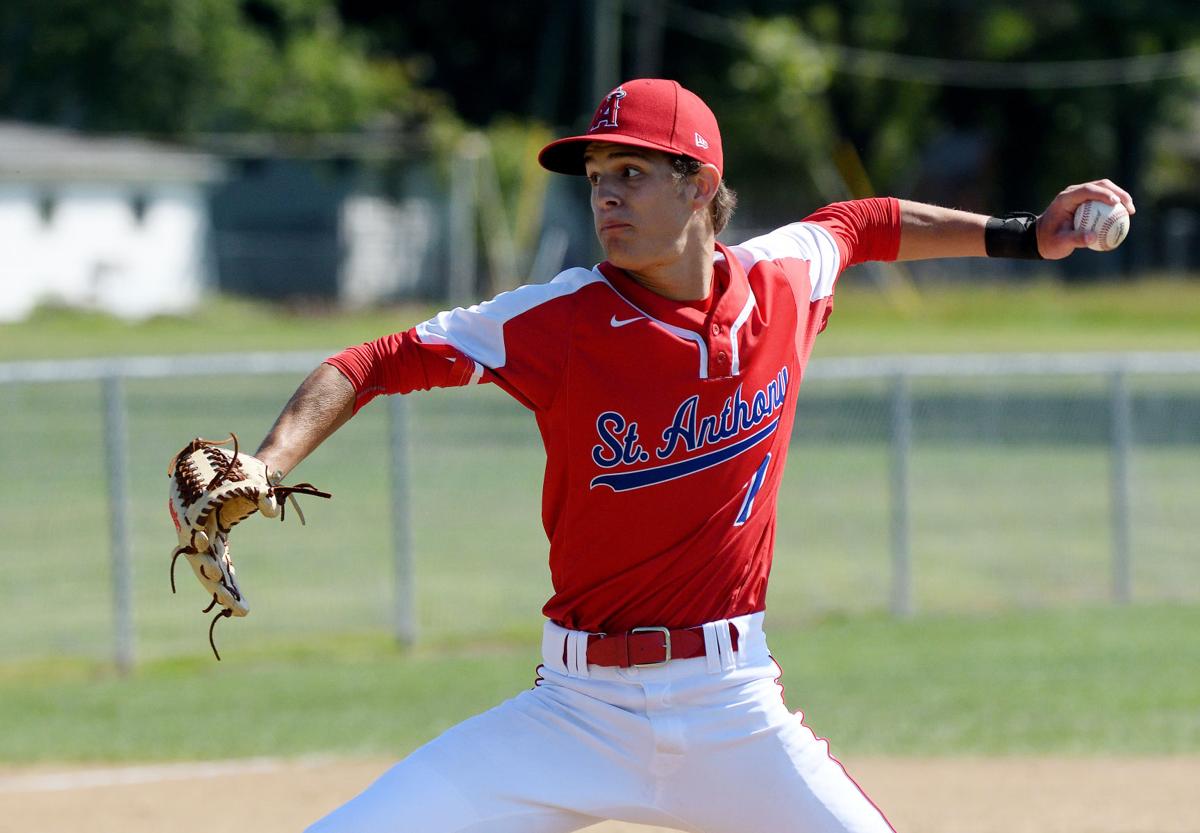 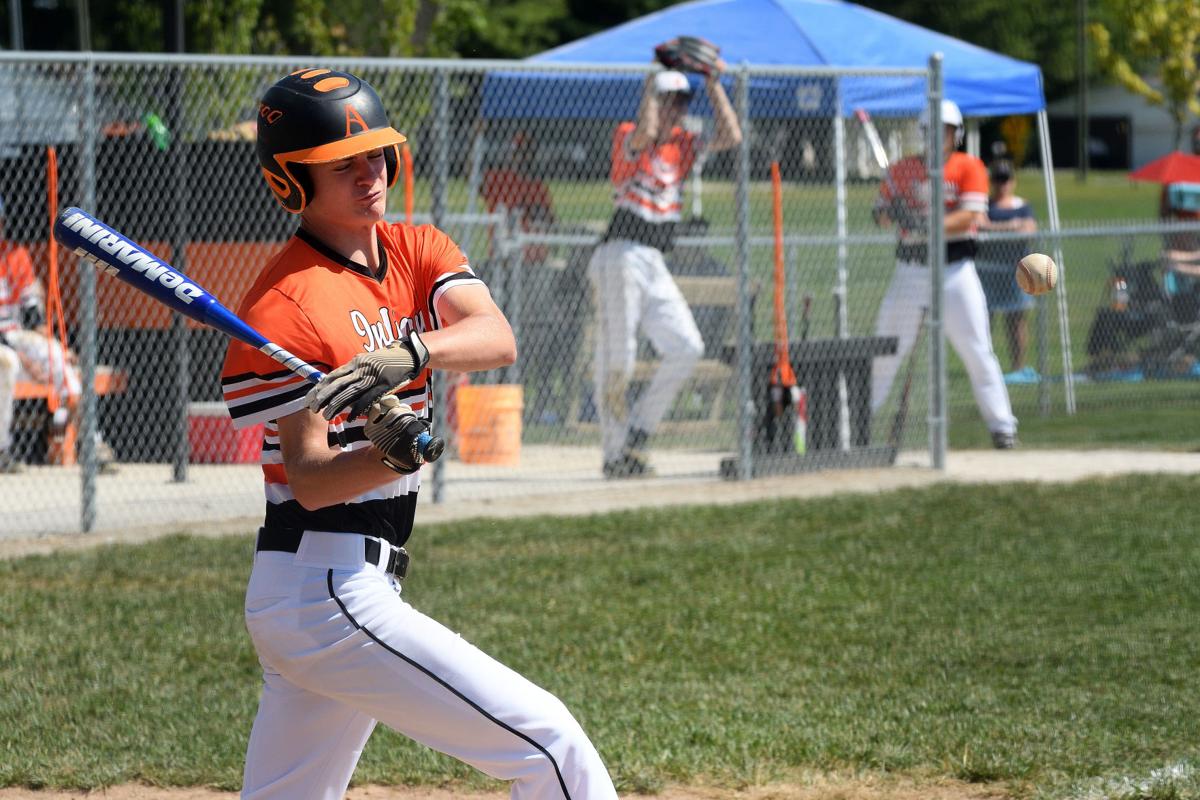 Altamont’s Kaden Eirhart reacts after hitting a foul ball bounces back into his face against St. Anthony Saturday morning at Altamont High School.

Altamont’s Kaden Eirhart reacts after hitting a foul ball bounces back into his face against St. Anthony Saturday morning at Altamont High School.

You wouldn’t have known that St. Anthony’s Logan Antrim hadn’t pitched yet this fall season by how the lefty fared against Altamont Saturday morning. Buoyed by a three run second inning by his teammates, the junior lefty who broke his wrist in the summer struck out seven while walking four to secure his first win of the season and giving the Bulldogs a 10-3 victory over the Indians.

“I liked [the performance]. I definitely need to keep my walks down but I like going after the batters and challenging them,” Antrim said. “That’s what you have to do with every batter.”

The Bulldogs started the scoring with an Aaron Webb double. Colton Fearday smacked a single sending Webb across the plate giving St. Anthony a 1-0 lead. Eli Moore batted another St. Anthony single up this time to center with Fearday racing home to give them a 2-0 advantage.

Altamont pitcher Hunter Cripe struck out Angelo Mendella. Antrim helped his own cause by hitting the Bulldog’s third single of the inning with Moore crossing the plate giving the Bulldogs a 3-0 lead. Jack Hoene walked and Kaden Fearday struck out ending the Bulldog inning.

“I felt pretty good. My wrist was hurting earlier in the year,” he said. but now that I’ve been working it and playing for a while now it’s back to normal.”

The Bulldogs started the bottom of the third inning with a Davis Tingley walk who then stole second. Webb hit a line drive to Altamont’s Kaden Eirhart sending Tingley to third. Colton Fearday hit into a fielder’s choice scoring Tingley and the only Bulldog run in the third inning making in 4-0.

“St. Anthony is a real good team. We’re a young team,” Indians head coach Alan Whitt said. “We’re still trying to figure out how to have the same energy. Last night was a tough loss and then to come back this morning. Give credit to St. Anthony they came out and did what they were supposed to do.”

The Bulldogs were back at it again in the fourth inning. Antrim hit a solid pitch to center field that Eirhart bobbled enabling Antrim to reach second. After a Hunter Cripe wild pitch that Antrim raced to third on, Hoene smacked a ball down the left field line that bounced over the outfield fence giving the designated hitter a ground-rule double and sending Antrim home giving the Bulldogs their only score of the inning and a 5-0 lead.

Altamont clawed back scoring a run in the bottom of the fourth, fifth and sixth innings to make it 5-3 before St. Anthony bust out the bats for five more runs in the top of the seventh inning.

“We kinda slept walk in the fourth, fifth, and sixth inning.,” Kreke said. “We finally woke up. You let a good team like Altamont back in the game and you saw what they can do.”

Kreke brought Colton Fearday back to the mound to close out the game after replacing him midway through and retired Indian batters without a score for a final of 10-3.

“He did good. We have a lot of trust in him. Not a lot of sophomores get an opportunity to come in at this level for St. Anthony. He did a nice job,” said Kreke.

Whitt said he’s proud that the his players didn’t quit.

“There’s enough of the older boys that have seen success to know that things can change. We have to keep teaching them that and keep talking about the game is never over until it’s over.”

For Bulldog pitcher Logan Antrim, Kreke said he looked “exceptionally well” for his first start of the year.

“There’s a few things we wanted to clean up. After that second out I always say ‘End the inning’. Find a way to bury that next batter. Part of that is just a little of bit rust,” Kreke said. “ He has a chance to be really really good and solid. He’s got to believe in himself and have that confidence.”

In the second game of the double-header, the Indians got its revenge by defeated the Bulldogs 7-3.

The Indians led 2-1 going into the fifth inning, when they were able to break the game wide open.

Marco Costa drove in a run with an RBI double and the Indians were able to score two on a pair of errors. They were able to go up 7-1 on a single from Tyler Robbins.

The Bulldogs got a run back in each of the sixth and seventh, but that’s as close as they were able to get.

Aaron Webb, Gavin Braunecker and Angelo Mendella each drove in runs for the Indians.

Kaden Eirhart earned the win, allowing one unearned run in five innings of relief while striking out four.