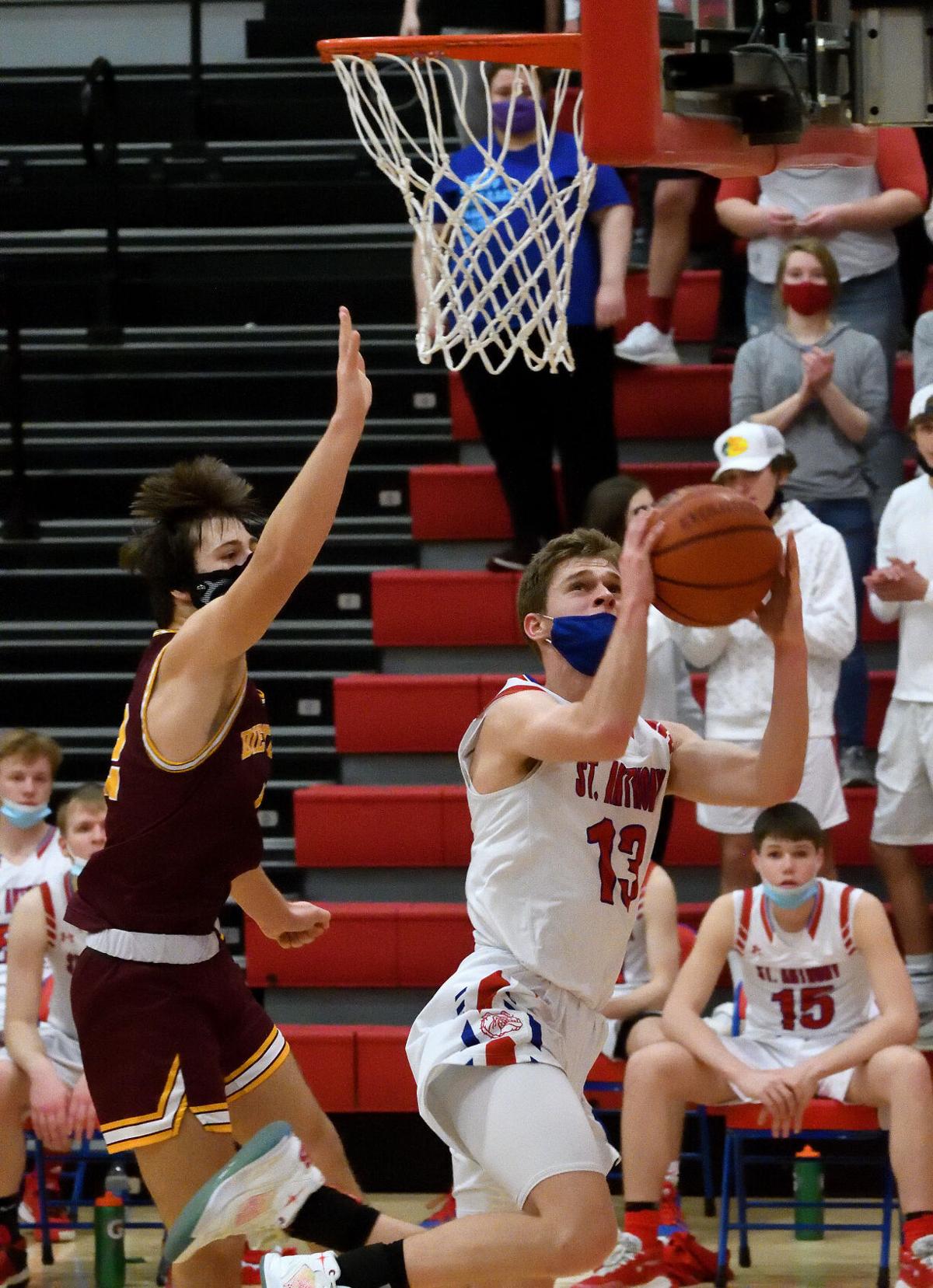 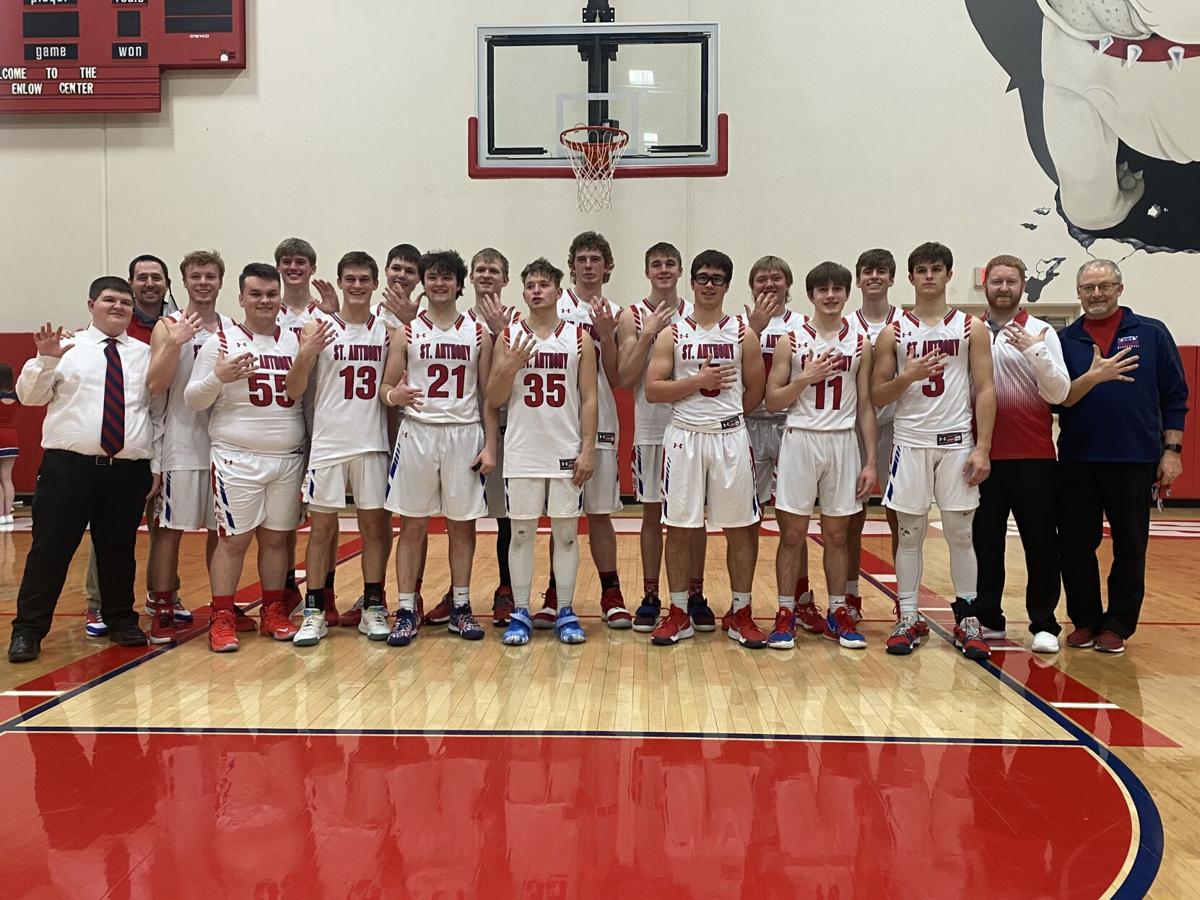 The Bulldogs wore down the Movin’ Maroons as St. Anthony captured their fifth consecutive tournament championship 60-42.

“Well there’s only one other way to end it more perfect,” St. Anthony head coach Cody Rincker said. “I thought it was a well played game by both teams. We made enough shots and caused enough problems defensively to create that separation.”

Dieterich’s Pete Britton led all scorers in the first quarter with five as the two teams played evenly with the Bulldogs taking a 13-11 lead into the first break.

The senior point guard would have the best performance of the the year shooting 6-for-9 from the floor and 1-for-3 from the arc in the game, with a game-high 14 points.

“Last year, he played really good against North Clay in the regional championship,” Rincker said. “But I would say from managing the game, and being aggressive in the game, and playing for the love of the game – these last couple of weeks for sure that first half(was his best). You saw a kid that was focused and determined and put us on his back to make sure we got that push we needed to get us that separation to be comfortable going into halftime.”

“We hung in there early,” Dieterich head coach Josh Krumwiede said. “They played very well in their own gym and really everywhere. They’re a good basketball team. We knew we were going to have to be efficient. We’re only averaging about 48 or 49 points a game so it puts a lot of stress on our defense. When they had 29 at halftime, yes we were still in the game, but my first reaction was ‘We’re going to have a hard time getting back in this.”

Dieterich wouldn’t have any shooting heroics against St. Anthony though, shooting 36 percent on 14-for-38 from the floor and 1-for-9 from the arc.

Just a few nights ago, a last-second three against Altamont by senior forward Derek Kuhl would get them to the championship game, only after injuring his foot in December.

“When I first heard we were getting basketball back, I was excited,” he said. “Then I broke my foot again which set me back a bit. I was glad to get back and was hoping to get to this game in the end.”

Kuhl said his team didn’t have the energy they did against Altamont where he sank the game winning basket.

“There was a lot of energy. All five of us on the court were making plays. I wish we had that same problem tonight. We didn’t We came out slower,” he said. “We didn’t play good defense. We couldn’t get out on number 11. He was just bombing them from the three-point line.”

St. Anthony would go on a 24-14 third quarter run with three threes from senior guard Ty Wiedman. St. Anthony’s bench would outscore Dieterich’s 16- 3 due large in part to Wiedman, who shot 60 percent on the night while adding 2 free throws garnering 11 points.

Dieterich’s Bryce Budde and Andrew Lidy led the Movin’ Maroon’s with 11 points each, but poor shooting as the pair would combine to go 6-for 16 from the floor and 1 for 5 from the arc.

St. Anthony senior guard Kennan Walsh was all smiles despite shooting just 2-for-9 from the floor.

“NTC champions five years in a row,” he said smiling. “ The first game against Neoga, I thought we played really well. There was some rocky games. We just wanted to play our game tonight and havepressure defense. Solid defense for sure and let the offense come to us. It feels great. It’s not the end we wanted, but I’ll for sure take it.”

Rincker said he was proud of how the team handled themselves due to the changes from the coronavirus.

“I appreciated the way these guys handled adversity. If they learned nothing else, they learned to stay even – not let yourself get too comfortable but also put their best foot forward.”

“When it doesn’t work out, you have to look back and be appreciative thast you were able to get back into this game,” Krumwiede said. “In a weird year where basketball was in jeopardy overall, the fact that these guys were able to fight through some of our hardships and compete in this game. It’s not what we wanted, but we’ll live with it.”

“I wish we had the opportunity to host one and have it be a true tournament and get a trophy for these kids,” Rincker said. “That’s disappointing. But if that’s the biggest disapointment we have for the opportunity to play these games and call ourselves champions. We’re just thankful to have the opportunity and play against the number two team.”