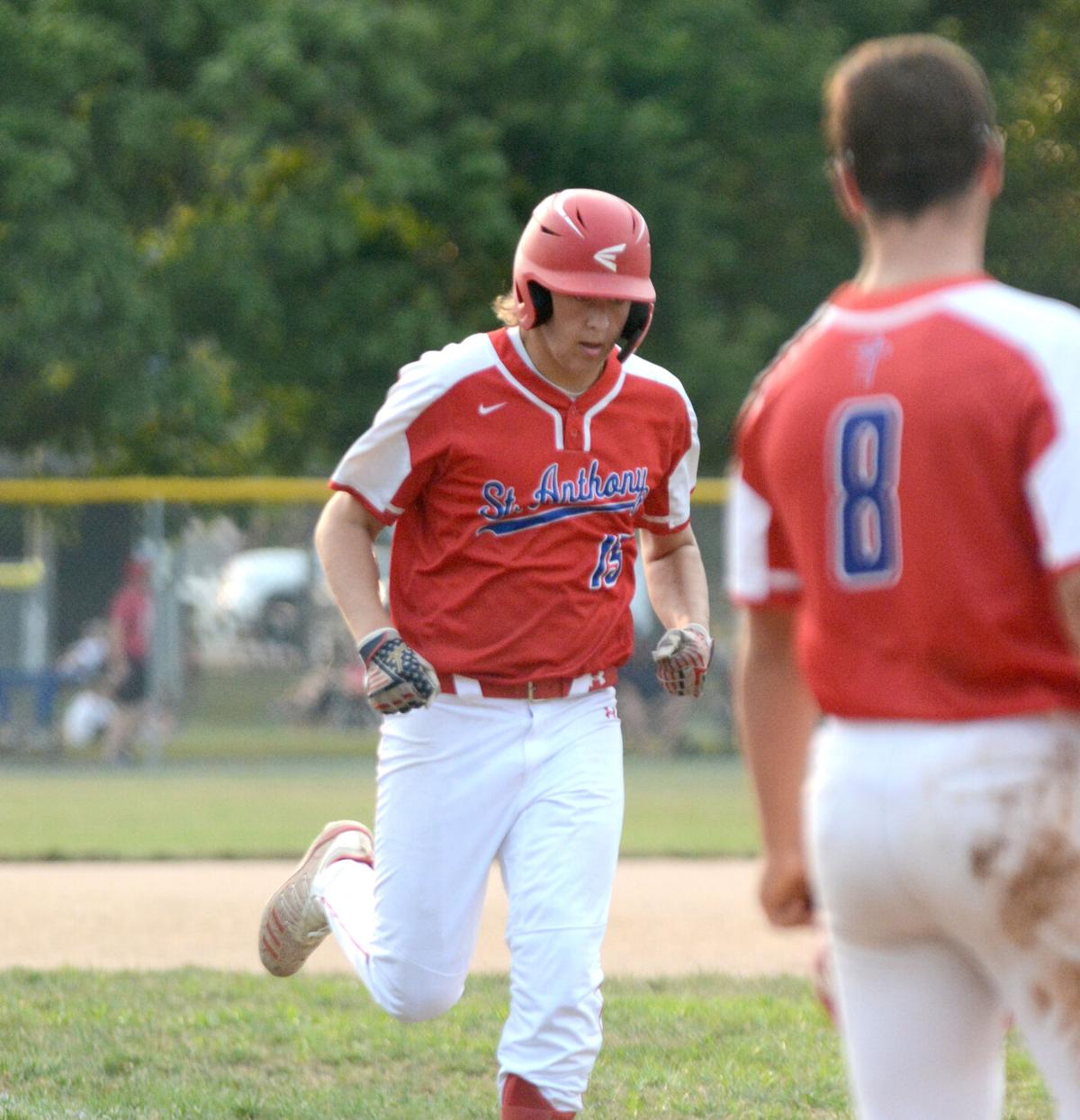 St. Anthony’s Brody Niebrugge trots toward home plate after hitting a 2-run home run in the bottom of the third inning Tuesday against Dieterich in the team’s 10-0 win. 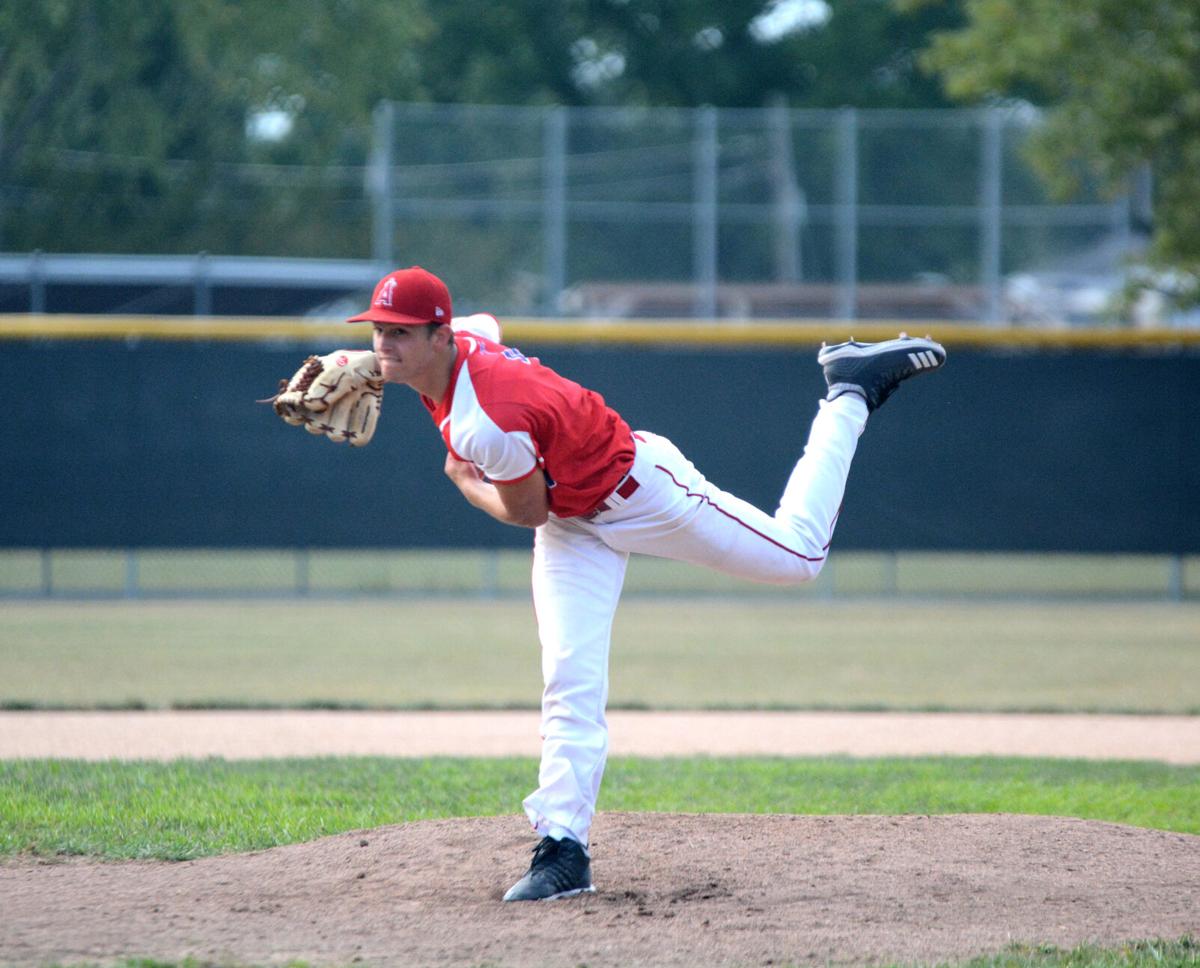 St. Anthony’s Logan Antrim follows through with his delivery in the team’s 10-0 win over Dieterich Tuesday. Antrim allowed just one hit over five innings while striking out nine.

St. Anthony’s Brody Niebrugge trots toward home plate after hitting a 2-run home run in the bottom of the third inning Tuesday against Dieterich in the team’s 10-0 win.

St. Anthony’s Logan Antrim follows through with his delivery in the team’s 10-0 win over Dieterich Tuesday. Antrim allowed just one hit over five innings while striking out nine.

The St. Anthony Bulldogs used a one-hit shutout out performance from Logan Antrim Tuesday to help defeat the Movin’ Maroons of Dieterich 10-0 in five innings in a National Trail Conference matchup.

However, the Movin’ Maroons were able to get runners aboard on walks, errors and a dropped third strike and did put runners in scoring position in the second, third and fifth innings, but Antrim was able to execute and dig in to get out of each jam unscathed. Antrim finished with nine strikeouts and four walks.

“[Antrim] started to settle in, but we weren’t able to make plays consistently behind him,” St. Anthony head coach Tony Kreke said. “That made him elevate his pitch count, which as a pitcher, you’re going to have to have those games where you need to pick up some defense, be resilient and be a team player. I thought he was able to do that and made some pitches in tough situations.”

Colton Fearday led off the bottom of the second with a single before a 2-out double from Kennan Walsh on a 3-1 count brought him in to score and take a 1-0 lead.

In the bottom of the third, Brody Niebrugge crushed a home run off the left field scoreboard to score Beau Adams, who courtesy ran for Antrim to make it 3-0 Bulldogs.

But the Bulldogs weren’t done in the inning, as Fearday followed up Niebrugge’s blast with a single. He advanced to second on a wild pitch before coming in to score on a single from Will Hoene to take a 4-0 lead after three.

Kreke said his players had good approaches going up to the plate in this one.

“That’s what we’ve been preaching in the past and finally we’re having some guys to believe in that,” Kreke said. “I free them up to allow them to attack and we want them to attack up there.

“That’s the mindset we want them to have when they’re up in the box, on the mound or on defense. That’s with life in general, you have to have that attack mode and have that mindset.”

In the bottom of the fourth, the Bulldogs were able to take advantage of a pair of errors by the Movin’ Maroons, scoring three runs with both errors coming with two outs to go up 7-0.

“We were making plays early,” said Dieterich head coach Josh Krumwiede. “They were putting pressure on our defense as the game went along. I thought we came out ready to go, but once one or two things didn’t go our way, especially when the home run hit the scoreboard. It’s kind of like a dunk in basketball, not only a home run, but it’s off the scoreboard.”

The Movin’ Maroons loaded the bases with two outs in the fifth, but Levitt was able to induce a ground ball to get out of the jam.

“We didn’t score any runs and it makes it hard to stay in games,” Krumwiede said. “Then every run that they score becomes ‘can we get to three? Can we get to four?’ All those thoughts go through our guys’ heads.

“I think sometimes to our detriment, we try to get them all back at once. We have to understand we have to chip. We had trouble getting guys on and when we did we couldn’t get them in.”

Walsh led off with a double and advanced to third on a wild pitch before Kyle Stewart drew a walk to put runners on the corners. Eli Link singled to left to drive in Walsh and advance Stewart.

Eli Moore followed up with a single to score Stewart. Antrim drew a walk before a single from Fearday drove in the 10th run of the game for the Bulldogs, winning the game for his club.

Up next, the Bulldogs will host Neoga while the Movin’ Maroons will host Altamont Friday.