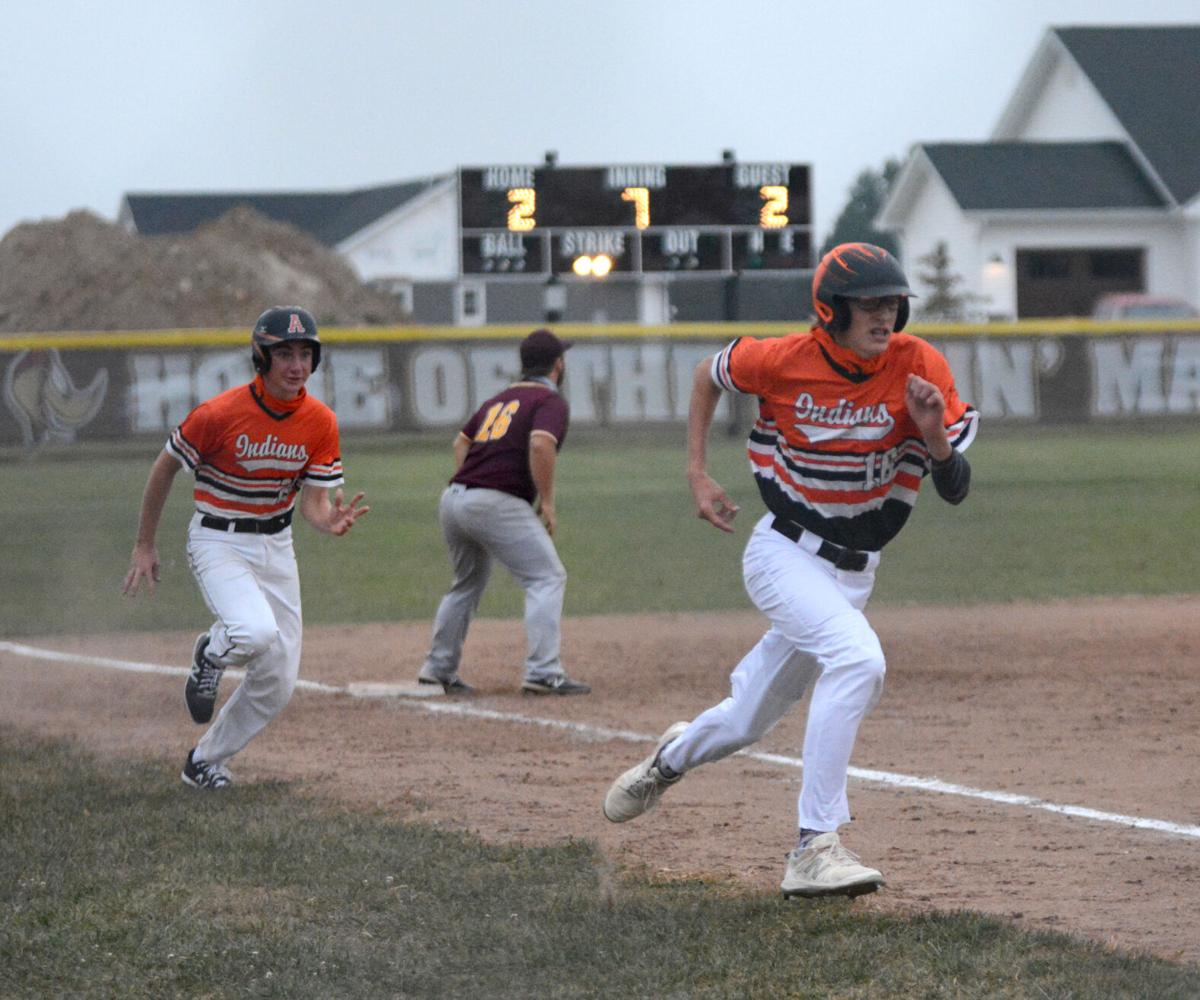 Altamont’s Aden McManaway (16) and Logan Cornett (24) race toward home plate for the fourth and fifth runs of the day on a bases-clearing double from Brayden Stuemke in the top of the seventh inning Friday at Dieterich High School. 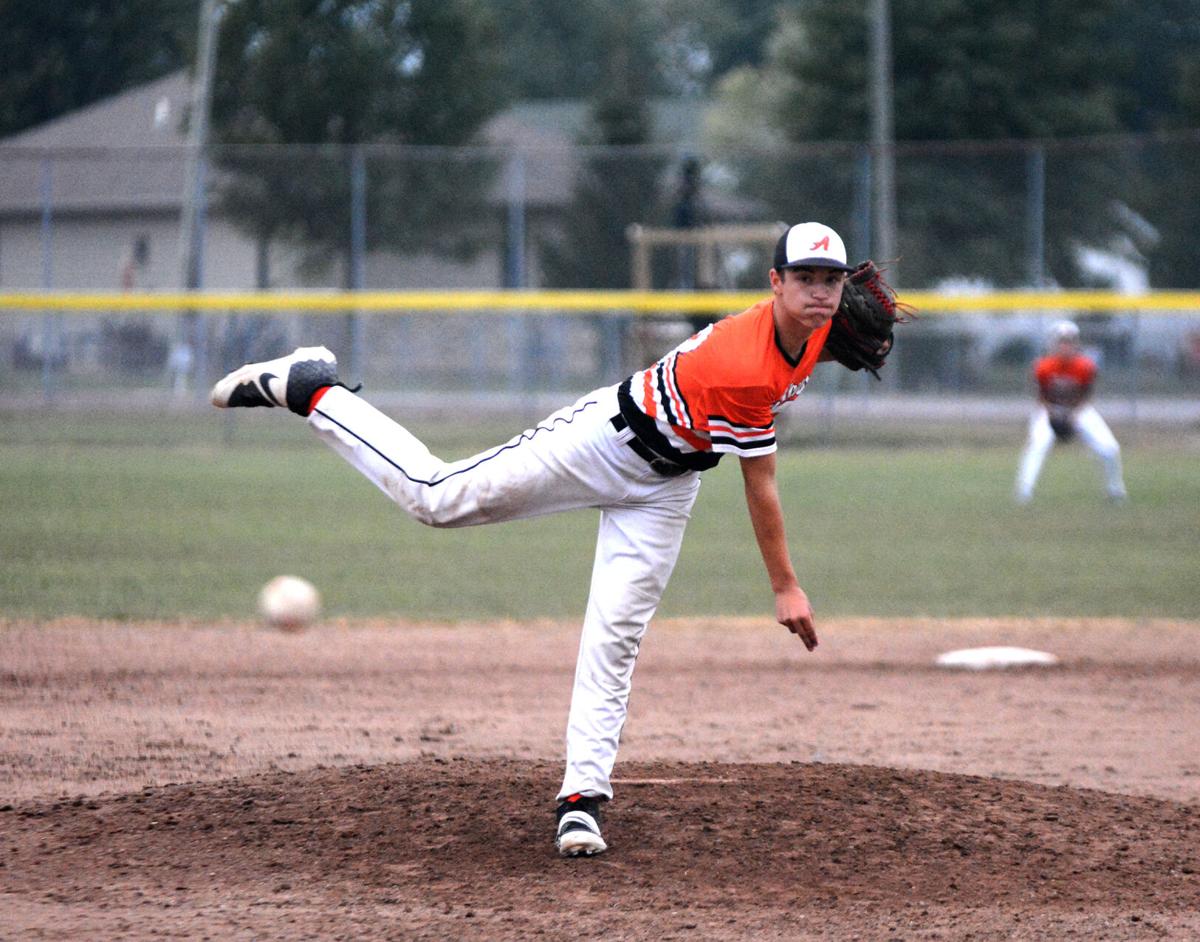 Altamont’s Mason Robinson hurls a pitch toward home plate in the team’s 6-2 win over Dieterich Friday. Robinson didn’t allow a run over six innings of relief.

Altamont’s Aden McManaway (16) and Logan Cornett (24) race toward home plate for the fourth and fifth runs of the day on a bases-clearing double from Brayden Stuemke in the top of the seventh inning Friday at Dieterich High School.

Altamont’s Mason Robinson hurls a pitch toward home plate in the team’s 6-2 win over Dieterich Friday. Robinson didn’t allow a run over six innings of relief.

The Altamont Indians used a 3-run double from Brayden Stuemke in the top of the seventh inning to help come from behind to defeat the Dieterich Movin’ Maroons Friday 6-2.

“You try to convince them to have some patience and to not try and do too much,” Whitt said. “You’ve got to work the count in your favor and get that pitch count up a little bit and I just kept reminding them of that.

“One thing I’ll never have to do is to get them to battle, because they want to win so bad it’s not funny.”

The Movin’ Maroons plated a pair of runs in the home half of the first inning. The first came on a bases-loaded walk from Garrett Niebrugge after Dalton Will has hit by a pitch to start the inning, followed by back-to-back singles from Austin Ruholl and Pete Britton, respectively.

“I really thought we’d get a couple more,” said Dieterich head coach Josh Krumwiede. “We had base runners all over the place, but we didn’t cash in as much as we should’ve. That was the whole conversation after the game with the team. It came down to us not coming through in spots and [Altamont] coming through in spots.

“It wasn’t about errors or anything like that. It was all about Dieterich not coming through in the clutch and Altamont coming through. It’s frustrating, but if it’s one thing we can focus on it and try to fix it, if it’s three or four you can get overwhelmed.”

But the Indians proved to not allow another run for the rest of the game, as Mason Robinson came in for relief of Tyler Robbins with nobody out in the second and allowed just three hits the rest of the way while striking out eight.

“Mason used his velocity well,” Altamont head coach Alan Whitt said. “And he was able to spot that curve ball to keep them off balance. We knew he had it in him. You could see it in practice and in some JV games that he was close to being ready.”

Dieterich pitcher Pete Britton had been cruising up until the top of the sixth, allowing just two hits to that point, both coming in the top of the first.

With one out in the top of the sixth, Kaden Eirhart drew a walk, followed by a single from Bradin Baucum. Both runners were able to move up on the throw, putting runners on second and third with one out.

Britton struck out the next batter to make it two down in the inning before Altamont’s Wyatt Phillips doubled, allowing Will and Eirhart to score and tie the game at two.

The Movin’ Maroons looked like they had something going when Cory Gephart was able to reach first on a slow roller to second base, beating the throw. Gephart stole second and was able to advance to third on an overthrow to put the go-ahead run 90 feet away with one down. But Robinson buckled down; striking out the next two batters to get out of the jam.

“I went up to [Hammer] before the inning and told him ‘you’re not really seeing the ball well, maybe you ought to bunt,’” Whitt said. “But he told me ‘coach I got this.’ Then he hit the double.”

With one down in the inning and runners at the corners, Robbins came in to score on a fielder’s choice to add a run of insurance and make it a 6-2 game.

But the Movin’ Maroons proved they were going down fighting, as Ruholl drew a 1-out walk, followed by a single up the middle from Britton. Both runners moved up one base after the center fielder over ran the baseball.

But Robinson was able to get a fly out to shallow left field, not deep enough to score Ruholl and picked up the final out on a strikeout to earn the win.

“I know we gave up the lead and lost the game,” Krumwiede said. “But overall, to keep going out there and having the energy, even though we were struggling to get runs, the body language and energy was so good, and so often this year it hasn’t been.”

“[Robinson] played a lot last year and ended up being a starter for us halfway through the season and got a lot of innings,” Whitt said. “He’s just a mature kid.”