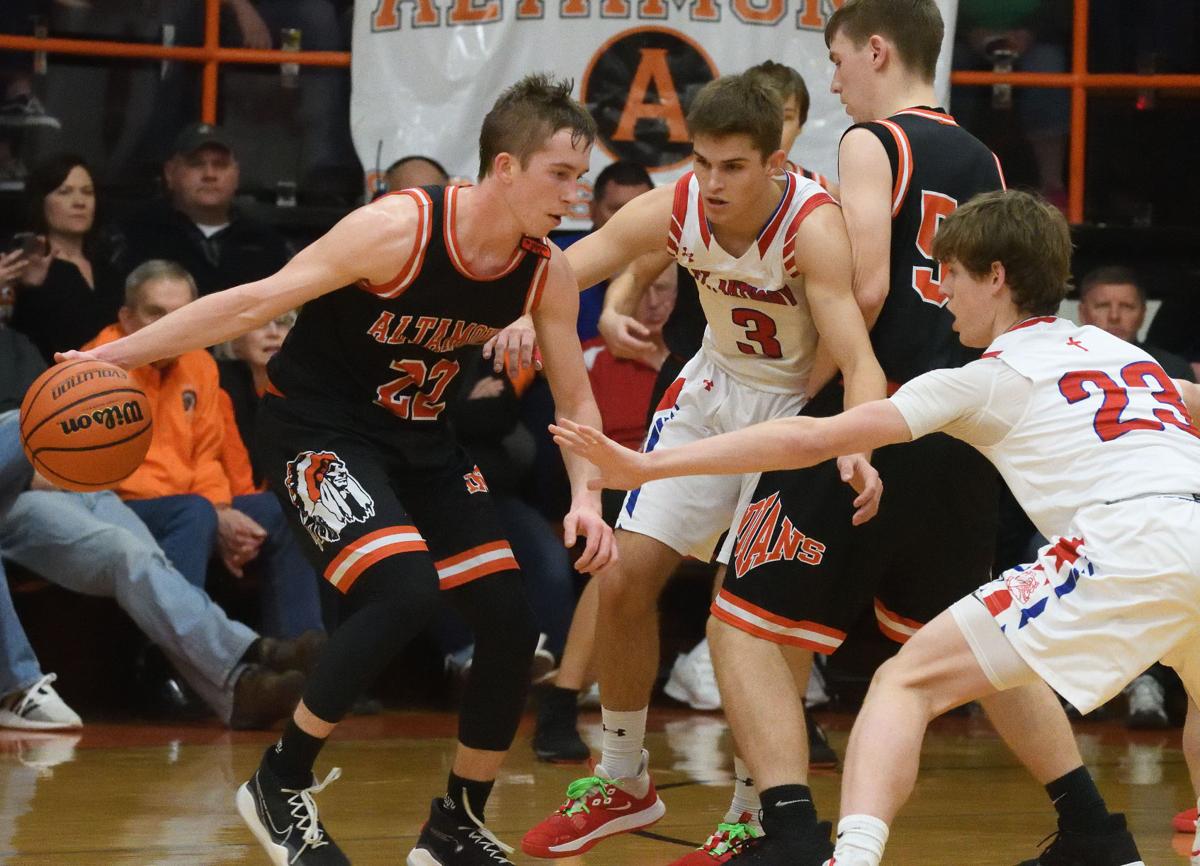 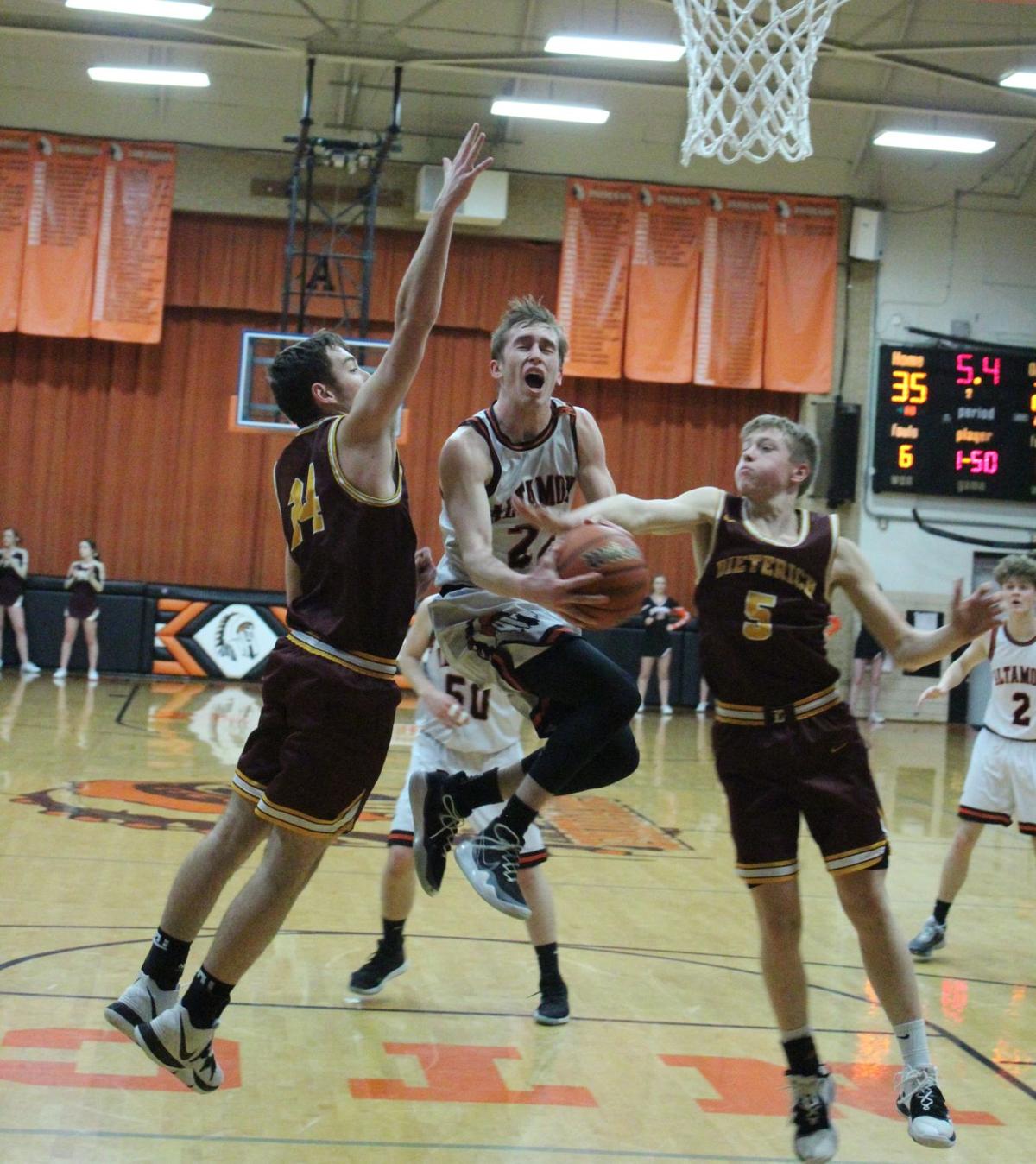 File: Altamont’s Aidan Jahraus drives to the hoop in the team’s regional championship win over Dieterich. 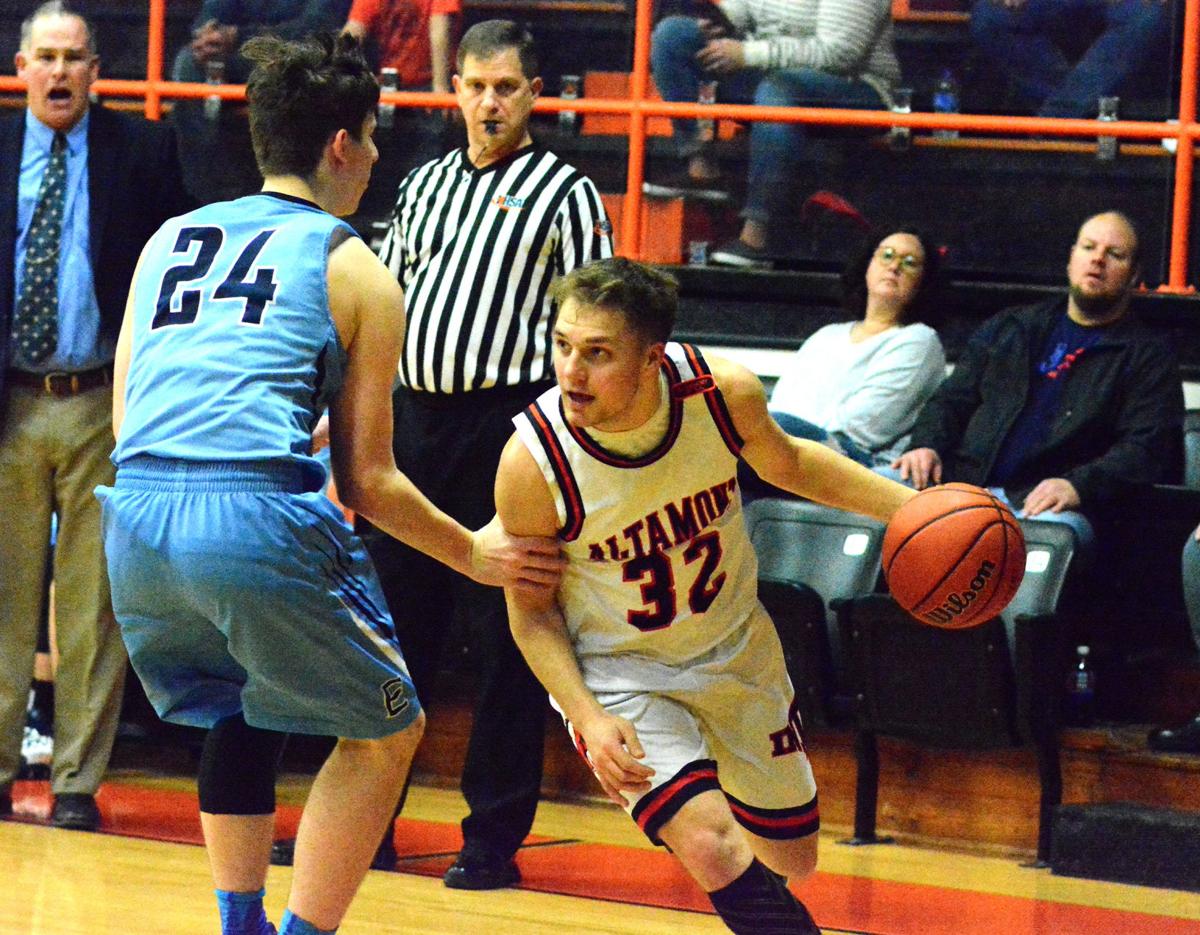 File: Altamont’s Aidan Jahraus drives to the hoop in the team’s regional championship win over Dieterich.

The Altamont Indians just wrapped up what turned out to be a historic season for the basketball program, earning 28 wins – the most by Altamont since the 1946-47 season.

The Indians had much to figure out coming into the season: How would they deal with replacing volume scorer Alek Biggs? And it not necessarily going to be a big team.

“We wondered if Aidan [Jahraus] or someone would step up,” said Altamont head coach John Niebrugge. “Once we knew he was ready to go and the summer he put in, we knew this team who had been playing for awhile, that we had a good returning group with experience. We were going to be height challenged, but we knew we had a good team coming back.

Jahraus spent much of his offseason working on his leaping ability, quickly turning into one of the higher jumpers in the National Trail Conference.

“He put in extra work on the Vertimax. For 5-foot-10 he could shoot over anybody and pull down more rebounds than most people,” said Niebrugge.

The team started off as well as anyone could’ve hoped, earning 11 straight victories, including a 20-point win over Pana in the first game of the season. It wasn’t until the championship game of the Sesser-Valier Christmas Tournament that the Indians would suffer their first loss.

“We started off great. that very first win against Pana we didn’t know what to expect,” Niebrugge said. “We knew they were returning a lot. Once we got out of that game, we felt like we had a pretty good team. Just the way we play, the way we defend, the way we shoot the basketball, we could beat about anybody, it was just a matter if shots were going in that night.

The Indians got banged up in the championship game of the Christmas Tournament against Goreville, with Denver Duckwitz and Jahraus coming away with injuries.

Following the Christmas Tournament, the Indians schedule remained intense. They rattled off three consecutive wins before having to play Woodlawn and Central A&M in back-to-back games.

“We had Denver out for a couple of weeks. He didn’t play in that first Central A&M game,” Niebrugge said. “What he brings with experience and mental toughness and basketball smarts, we didn’t have him against Dieterich either.

“Aidan was still getting used to playing without a left wrist basically. Noah [Teasley] had nagging injuries all year. We found out he had a broken finger but he played through it. He’s a tough-nosed kid. You always wish you could go through a season without injuries, but these kids are tough. They can play through things other kids may not be able to.”

Following the loss to Central A&M, the Indians got back in the saddle and won 10 of their next 11 games, including earning an appearance in the NTC Championship game against St. Anthony.

“We preach that practice is harder than games,” Niebrugge said. “We get after each other. We fear none but we respect all. When it was push come to shove, we won the games we needed to, but didn’t win a game we weren’t supposed to. We smoothed some wrinkles out as we played.”

But following the NTC Tournament, the team had to deal with adversity, taking back-to-back losses to Tuscola and St. Anthony respectively, followed by a five-point overtime win against the Hatchets of Windsor/Stewardson-Strasburg on senior night to finish the regular season going into the playoffs.

“It was concerning. I told the boys at the end of the year that those last two or three weeks I became more of a psychologist more than a basketball coach,” Niebrugge said. “I will be the first to admit that’s not my forte. I’m not a talker by any means.

“We had some sit downs. We weren’t shooting the ball real well and weren’t getting the best shot selection. I don’t think it was anything to do with team chemistry or selfishness, we just weren’t playing well. We were in a funk or you could call them the dog days. It was more or less getting back to what we do.”

Once in the playoffs, the Indians started to dominate, winning all three of their regional playoff games by an average margin of 27.6 points per game, including a 64-44 win over Dieterich for the regional championship to earn them a second date with Central A&M in the sectional semifinals.

“In the first practice before the regionals, we got out the treadmills and got back to basics. I told them that if they don’t sit down in your stance, talk in help side defense, and don’t do the little things, you’re going to run,” Niebrugge said. “I think that kind of sparked us.

“At the beginning of the year, we worried about the little things and let the big thing fall into place. We got back to basics and what we were good at. We concentrated on defensive and rebounding and let the other things fall in place and they did through that regional week.”

After seeing how his team responded and played in the regional round, the Indians were confident with how they had played and what was ahead. This time around the Indians were more healthy, with Jahraus’ wrist having had time to time to heal a little bit as well as getting Duckwitz back into the lineup.

Central A&M took a 14-8 lead after one quarter, but the Indians responded by out scoring the Raiders 21-17 in the second quarter to make it a one-possession game at halftime. They even got a good look at a 3-pointer from Jahraus in the closing seconds of the half that could’ve put them up one.

“To be honest, Mr. [Jerry] Tkachuk mentioned to me after that the worst thing that happened to us was halftime,” Niebrugge said. “We were on a roll. We made an adjustment from the first time we saw them. We made Aidan and Kaden screen for each other which is tough to guard because you can’t help off of either. We were getting really good action out of that.

“[Central A&M] went in and adjusted and with those good of players, they went on a little bit of a run to stretch it out. We had them. They’re just so good at going on 10-0 runs that bite you in the rear end. If halftime wouldn’t have happened I would’ve liked to see what our run would’ve went on to. We were proud of how we played that game.”

Above all else, Niebrugge is going to miss the practices they had along with the comradery of the 2019-20 team.

“These boys get along. Not that I’ve had selfish players in the past, and I haven’t and don’t allow it, but these guys aren’t the most outspoken, but they get after it,” Niebrugge said. “They want to win. Practices were fun. Noah Teasley hates losing and hates failure.

“Aidan Jahraus will do anything within the gameplan to win. Denver would get after kids you didn’t think he’d say two words to. It was fun. These seniors that I’ve seen grow up since fourth or fifth grade and really have become great ball players and great young men.”