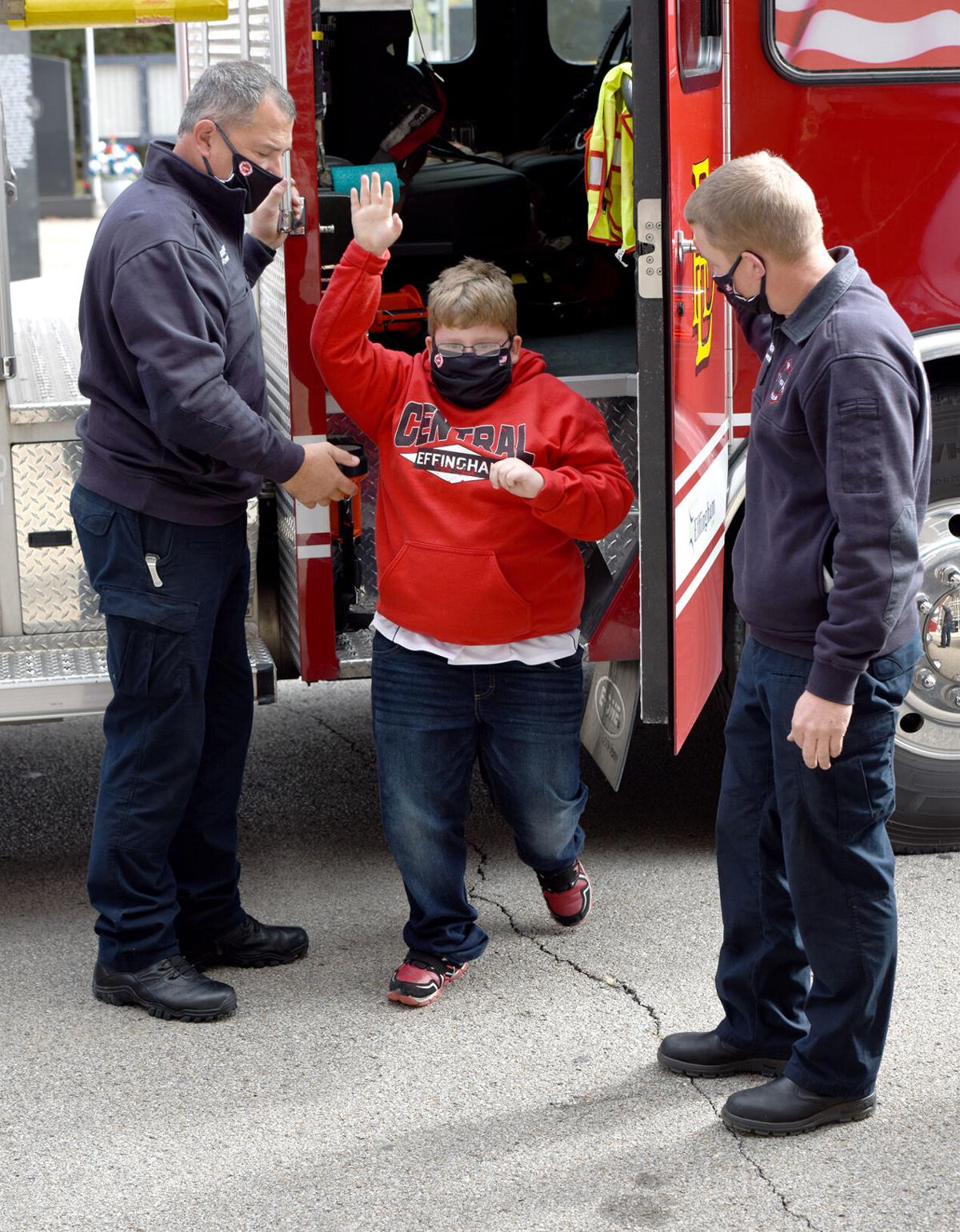 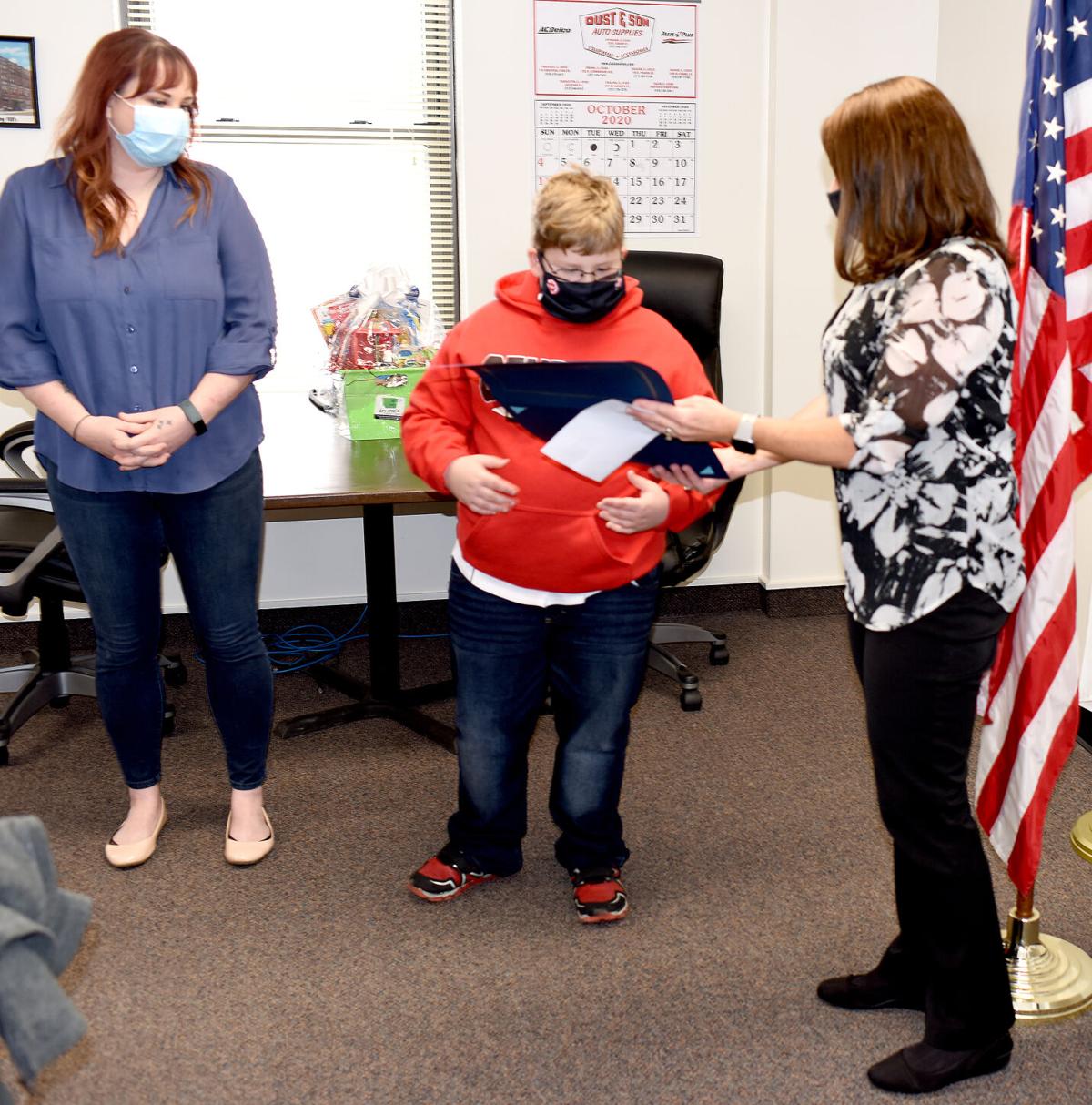 Tuesday was a special day for a Watson boy who received a special achievement award by the Effingham County 911 Board.

Lucas Grupe pulled up to the Effingham County Office Building inside a fire engine manned by members of the Effingham Fire Department. Grupe was helped off the engine by EFD Lieutenant John Kronewitter and EFD Firefighter Lucas Kroening.

Grupe then got a chance to see where he made a call to Effingham County Sheriff’s Department Assistant Telecommunicator Supervisor Alysa Kilman, who was on duty June 6 – the day after Grupe’s eleventh birthday. His mother, Cindy Grupe, told her son to call 911 when she thought she was having a heart attack.

Stephens, Grupe and Kilman stood before the board while Stephens read the proclamation recognizing Grupe for knowing when to call 911 and knowing important information such as a name, address and phone number that Kilman could use to get the right help to the right place.

“My mom thought she was having a heart attack. She had me call 911 and help came,” Lucas Grupe said. “I was feeling a little bit scared.”

Grupe said the Watson Fire Protection District arrived with a rescue truck before the ambulance arrived.

“We get so many people who call in and don’t know exactly where they are located,” Kilman said. “Lucas knew everything from the address, knew his mom’s age… He knew it all.”

In addition to the 911 Achievement Award, Lucas Grupe received a gift basket.

A list of what information parents should teach their children in case they have to call 911 for an emergency can be found on the Effingham County 911 board website: 911effinghamcounty.org/kids-corner

She said Bales had been checking into a leadership certification class and found one for $1,000.

“Training kind of suffered this year because of COVID. We haven’t been able go anywhere for training,” Daniels told the board.

Board members unanimously approved a telecommunicator training course for four telecommunicators for a total of $1,436 and leadership training for Effingham City Police Department Communications Manager Billie Bales for $1,000.

Effingham Police Chief Jason McFarland presented a proposal he earlier discussed with the City and County communications supervisors Bales and Daniels to create a new Facebook page for the 911 Board.

“The purpose of this would be education (about the 911 board) they are not getting in the schools and not reaching young people. It would be a good way to communicate with the community as to what is going on with the 911 board,” McFarland said. “The page would be moderated by both Billie and Tina on behalf of the board.”

“I think it’s a zero cost, huge gain as far as what we could provide the public,” McFarland said.

“There is so much information we could get out to people,” Bales said.

Bales said having a Facebook page would help get the word out about Text 911 and Rapid SOS for setting up an emergency profile.

Effingham County 911 Board Chairman Julie Stephens said she would like to look at their current website to determine whether or not they wanted to link the site to the Facebook page.

Board members also approved liability insurance renewal plan with payment to be approved at the next 911 Board meeting and approved a FY 2021 budget lay over until the Nov. meeting. The Effingham County fiscal year begins Dec. 1.