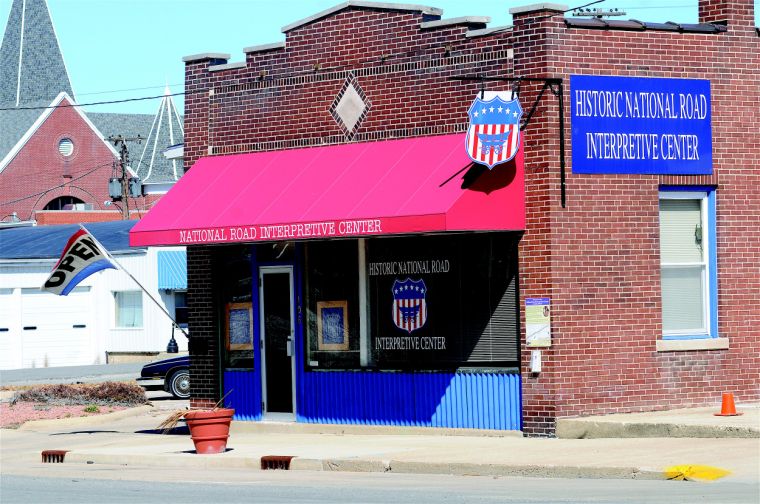 The National Road Interpretive Center in Vandalia opened in 2009. 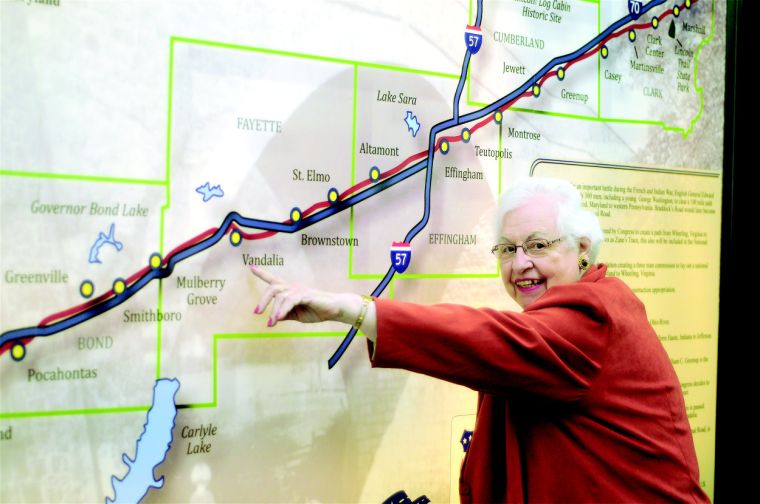 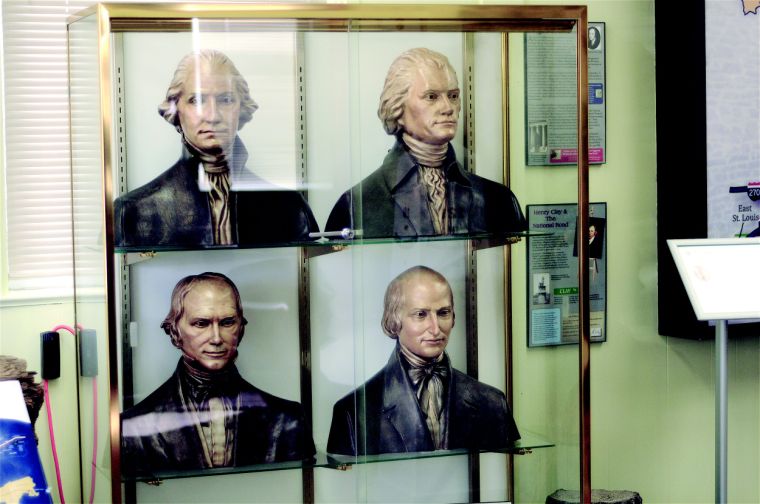 The busts of (clockwise from top right) Thomas Jefferson, Albert Gallatin, Henry Clay and George Washington are pictured in a display at the National Road Interpretive Center in Vandalia. The four men were instrumental in the making the construction of the road a reality.

The National Road Interpretive Center in Vandalia opened in 2009.

The busts of (clockwise from top right) Thomas Jefferson, Albert Gallatin, Henry Clay and George Washington are pictured in a display at the National Road Interpretive Center in Vandalia. The four men were instrumental in the making the construction of the road a reality.

It’s not easy fitting 164 miles of history into a 49-by-24-foot building. But the National Road Interpretive Center in Vandalia has managed to pull off that formidable task.

Established in 2009, the most recent addition to Vandalia’s historic downtown area tells the story of the National Road in Illinois through numerous artifacts and interactive displays.

“We’ve got a lot of stuff in here,” said Mary Truitt of the National Road Association of Illinois.

Among the facility’s many charms is a $32,000 interactive map that illustrates the National Road’s path through communities, such as Greenup, Teutopolis, Effingham, Altamont and St. Elmo.

Another highlight is a miniature theater area in which visitors can view a six-minute documentary telling the story of the National Road.

And what a story it is.

Built in the early 1800s, the National Road proved instrumental in the early development of the United States. Prior to its construction, settlers had only winding horse trails to navigate through the vast wilderness on the western frontier. The National Road essentially served as America’s first interstate highway, and Truitt emphasizes that its impact cannot be overstated.

Construction of the National Road in Illinois began in 1830. Not coincidentally, the young state’s population doubled by 1840.

“The National Road really, really opened up the country,” Truitt said. “When we say it is the road that built the nation, we’re not joking. It really did.”

The interpretive center is located in Vandalia, in part, because the National Road originally ended on what is now Gallatin Street in the Old State Capitol city (the street was named after the U.S. Treasury Secretary who was a champion of the project).

But Vandalia was not the road’s originally planned stopping point.

By the time the road had reached Vandalia in 1838, federal funding had run out. Certain factions also wanted the road to continue to St. Louis, while others wanted it to go north to Alton. Neither got their way, as the controversy and financial situation caused Sen. Henry Clay — one of the projects biggest advocates — to throw in the towel.

“He threw up his hands and said, ‘Put what little money we’ve got into railroads and canals,’” Truitt said. “And they did.”

Railroads came to dominate the transportation industry in the 1850s, and the National Road’s significance dwindled in the latter part of the century.

But the rise of the automobile age in the early 1900s brought the National Road back to relevance. And in 1910, the National Trails road was attached to the Old National Road, stretching all the way to the Pacific Ocean.

U.S. Highway 40 has since been built on the National Road’s original path, with Interstate 70 running parallel to it for long stretches.

“This national road was spectacular,” Truitt said. “And just looking at the big map out there, you see the original line of the road and Interstate 70. It practically sits on top of it all the way, because it was just the ideal spot for us to have this communication route.

“That’s why (the interpretive center) is here and that’s why it’s important.”

Like the National Road, the building designed to pay tribute to the trail’s historic significance started small but has grown through the years.

The National Road Association initially hoped for the facility to be located in a building on the corner on First and Gallatin streets. But a projected price tag of $2.3 million proved too high, and it was determined that a building just north of Vandalia’s new city hall — the former home of Sonnemann Lumber Co. — would be a more practical location.

The project started with a modest $600 donation from the Old State Capitol Fund. The map of the National Road was originally on two pieces of posterboard when the facility opened on Feb. 12, 2009.

“I mean, we were poor,” Truitt said. “But we used what we had and opened.”

A $171,000 grant was eventually secured, allowing for upgrades that include the current National Road map, a centerpiece of the facility.

“It talks to you and shows you pictures of each community,” Truitt said.

The building’s modest dimensions made housing a giant conestoga wagon — essentially the National Road’s answer to the modern semitrailer — an impossibility.

But Truitt and company have made due, finding a local wagon builder to construct a smaller-scale half version of the wagon, featuring an authentic conestoga base.

“We felt we had to have a wagon somewhere, somehow,” Truitt said. “It’s not as big as normal but there’s just not enough space.”

A mockup of the interactive kiosk that will soon be installed near Burtschi Bros. in downtown Vandalia has recently been added to the interpretive center. Each town along the national trail in Illinois will be getting one of the kiosks, which will feature a specific theme for each city; Effingham’s will be the railroad.

“They have been designed so that when you look up from the kiosk you will see something that is on the kiosk to tie them all with the communities,” Truitt said.

Some of the interpretive center’s most charming artifacts have been made available through generous donations.

In 2007, a rural Effingham resident recovered several wood timbers that had formed  “corduroy” roads in low-lying areas along the National Road. One of the timbers — which had been buried since 1830 and therefore preserved remarkably — can be viewed at the interpretive center.

“We were extremely fortunate with the log,” Truitt. “Those who have something (from the road) have been very kind.”

The interpretive center recently celebrated its fifth anniversary, and its modest dimensions are now bursting with more history than its 1,176 square feet would suggest — and as about as much as they will allow.

“We still have a few things that have to be done, but it’s as close to finished as anything can get, because we don’t have any more room,” Truitt said with a laugh. “We took what we had thought we wanted in that big building and kind of mashed it together and put in here.”

The interpretive center is open Tuesday through Saturday from 10 a.m. until 4 p.m. and admission is free. For more information, visit its website at www.nationalroadvandalia.org.