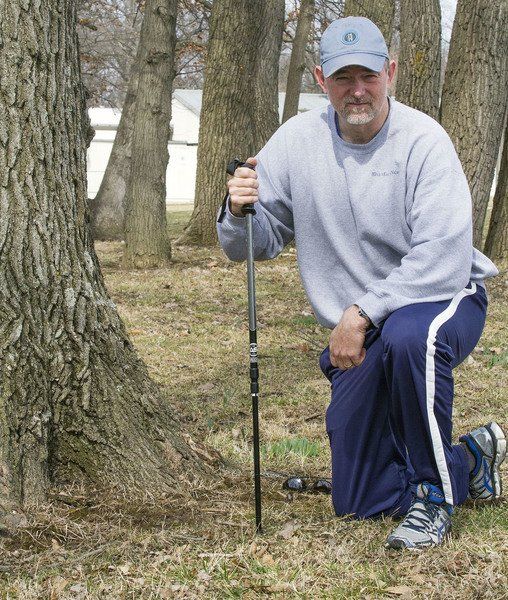 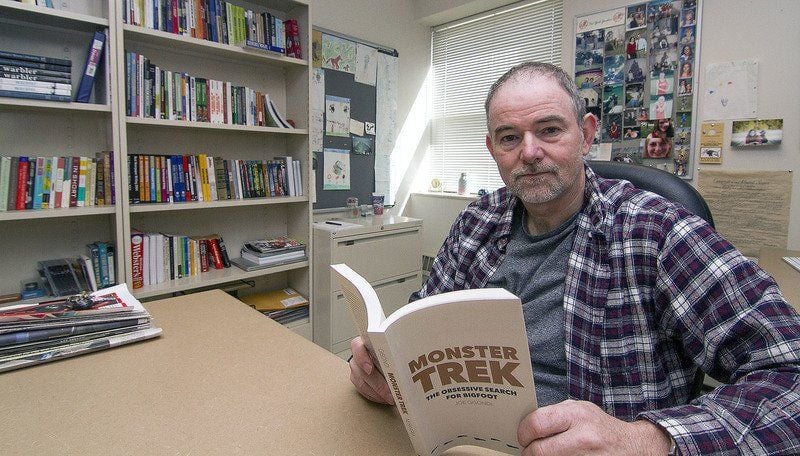 Gisondi, professor of journalism at Eastern Illinois University, spent several years researching and writing “Monster Trek,” which was released recently by University of Nebraska Press. He admits that he has always struggled with faith, and that, he said, was the motivation for writing the book.

“Bigfoot, for me, was a litmus test of sorts,” he wrote. “Searching for bigfoot is somewhat like searching for one’s faith. If something as unlikely as bigfoot can exist, perhaps that indicates that other unlikely things may also exist — like heaven and an afterlife.”

Gisondi has been fascinated by stories of bigfoot ever since he was a young boy reading the National Enquirer in the 1970s. But as an adult, his fascination turned from not only wondering whether bigfoot exists but to the defining question: Why dedicate your life to finding out?

“I want to know why these people are doing what they do,” he said in a recent interview. “What drives them? How can a former law student like Matt (Moneymaker of TV’s “Finding Bigfoot”) toss aside a legal career to search for bigfoot? How can a person who studied law, who relied on facts and evidence, devolve to suppositions and theories?”

In the end, it wasn’t just the excitement of possibly seeing one of the giant, hairy creatures that compelled Gisondi to join investigators searching for bigfoot. It was that these researchers wanted to believe in something, even if they hadn’t yet proven that it exists.

“I’m enamored of those whose faith is unwavering,” he wrote in the book’s introduction.

“I wanted to see how passionate these people are and focus on them,” he said. “More than anything, my struggles with faith all of my life helped me to better understand these people.

“They have seen things that they believe to be bigfoot. Some are without a doubt, but some are going, ‘Did I really see that?’ And they’re going out in the woods to see if they can experience it again.”

In researching the book, Gisondi participated in expeditions throughout the country — from Florida to Ohio to Wisconsin to North Carolina to Oklahoma. Eight of these expeditions are detailed in the book.

“Perhaps I’m the crazy one, following people who are perceived to be unbalanced into remote areas at night,” he wrote in the book. “But I figured it could all be worth it, especially if, along the way, I could gain illumination — or even something close to it.”

Although Gisondi can’t claim illumination in the form of a confirmed bigfoot sighting, it didn’t take long for him to have an experience he’ll never forget.

“It was my first moment in the woods,” he said, working with Matt Moneymaker, creator of the Bigfoot Field Researchers Organization, on an expedition in the Ouachita Mountains of Oklahoma. Moneymaker is one of four people featured on Animal Planet’s program, “Finding Bigfoot.”

“Matt decided to take a smoke break, so he hands me this $10,000 piece of equipment (thermal vision binoculars). Within a couple of minutes, I see what, in my mind, was a bigfoot creature, kneeling, looking straight at me behind some trees.

“I started thinking, ‘There is no way in hell that in my first moment in the woods I’m going to see a bigfoot looking back at me.’ I kept looking and looking, and I could see it. So I tried to call to Matt in an understated tone — I’m not sure how successful I was at that.

“He came over and I told him. He took the camera and couldn’t see anything. He says, ‘Try to find it again.’ I pointed the camera in what I thought was the area again and didn’t see it at all.

“Monster Trek” is full of stories of similar sightings by others — from scared teenagers to dedicated researchers. Some are more believable than others.

Although Gisondi can report only the one sighting during his various expeditions, he reported other unexplainable experiences, including one in the Green Swamp of Florida.

Gisondi grew up in Florida, and with his wife, Betsy, who is a biologist, he has spent much time hiking, camping and canoeing.

“I heard some things that I couldn’t explain, and I’ve been in the woods a lot. There were things I heard that night I hadn’t heard before,” he said of an experience that he describes in the book as leaving him “terrorized and mesmerized.”

“I wished I had taped it. I had the tape recorder, but I was so caught up in listening I didn’t turn it on.”

Another expedition special to Gisondi was one to the Garden of the Gods area of southern Illinois with his daughter, Kristen. The teen, like her mother, believed bigfoot was a myth and thought only foolish people searched for it.

Still, she wanted to tag along on the expedition to the Shawnee National Forest despite temperatures approaching a steamy 100 degrees.

The group on this expedition didn’t see bigfoot, but they did report hearing footfalls and other sounds that were unlike any animal native to the area. The sound left researchers both exhilarated and frustrated. It proved to be an eye-opening experience for Kristen.

“She still remains skeptical, but she’s far more open-minded than she thought she would be,” said Gisondi. “It’s easy to say bigfoot doesn’t exist when you’re in your living room, but when you’re out in the middle of the woods, your perspective can change.”

Gisondi admits he was afraid at times during expeditions — but not necessarily of bigfoot.

Gisondi confesses going through these remote wooded areas in the middle of the night is not the brightest idea.

“Each of these areas has things to be concerned about in nature,” he said, referring to big cats and bears. “The fact that a large creature, such as bigfoot, could snatch me at any point is something that was a little unnerving, but not at the same level.

As a journalist, Gisondi said he wanted something to happen. But on a personal level, he didn't.

Gisondi said bigfoot enthusiasts will certainly enjoy his book, which also has hints of the paranormal. But he admits that he didn’t write it for them.

“I wrote it for people who have very little knowledge or interest in it,” he said.

He encourages readers to keep an open mind.

"People believe they know what they know already. The people who search for bigfoot, they have really open minds," he said.

“Too many people have closed minds about many things. I hope people will maybe keep an open mind about things after reading this book. Seeking knowledge is a good thing, whether spiritually or scientifically.”

“Monster Trek: The Obsessive Search for Bigfoot” is available online for $18.95 through Amazon or University of Nebraska Press.

Heldebrandt of Mattoon is a former newspaper editor and the public relations director at Booth Library at Eastern Illinois University. She earned a bachelor’s degree in journalism from SIU-C and a master’s degree in English from EIU.