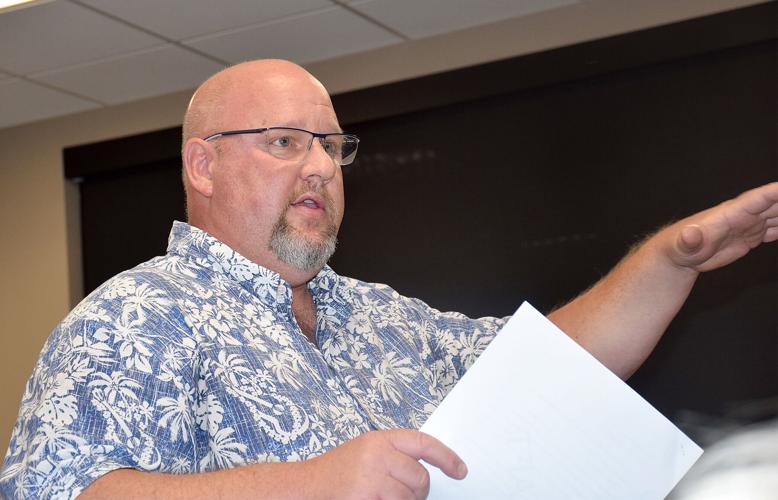 Eric Pals shares his concerns with the Teutopolis Village Board during their discussion of a drafted ordinance that would place regulations on solar energy systems in Teutopolis. Pals is the president of Tick Tock Energy Inc. in Effingham. 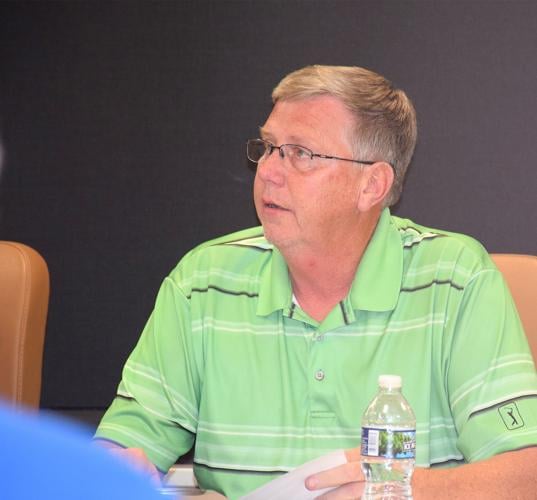 Teutopolis Village Board Trustee Dave Tegeler discusses a proposal for a subdivision plat at 14240 North 1600th Street. No action was taken by the board on the matter Wednesday.

Eric Pals shares his concerns with the Teutopolis Village Board during their discussion of a drafted ordinance that would place regulations on solar energy systems in Teutopolis. Pals is the president of Tick Tock Energy Inc. in Effingham.

Teutopolis Village Board Trustee Dave Tegeler discusses a proposal for a subdivision plat at 14240 North 1600th Street. No action was taken by the board on the matter Wednesday.

Teutopolis is considering regulations for solar energy systems in the village.

During a meeting Wednesday, the village board received some push back from Tick Tock Energy Inc. President Eric Pals, who said ordinances like this are “killing solar.”

Both the federal government and the state of Illinois have recently put incentives in place to support a shift toward renewable energy. When combined, the new incentives could save Illinois residents up to 70% on rooftop solar systems.

Despite these incentives, Pals claimed that imposing additional regulations on solar systems will reduce the number of people who can install them and discourage residents from making the switch to renewable energy.

“The purpose and intent of solar is to put enough solar on the rooftop to offset the kilowatt hours consumed from the grid. There’s state incentives and tax credits that help pay for that, but if clients can’t get that 100% offset, they typically choose not to do the job,” Pals said. “The state and the federal government, they’re all pushing for solar, but everywhere we go in these municipalities all of our jobs are getting killed by these ordinances.”

Pals also said solar energy ordinances have hurt the state’s solar energy providers, causing some to close all together.

“When we started there were no ordinances. There was no interconnection application. It was the wild wild west,” he said. “We’ve been doing solar for 16 years, and when we started in the solar industry there were seven solar companies in Illinois. There’s only one of those seven surviving. That’s us.”

Village Board Trustee Daniel Zerrusen shared some of Pals’ concerns, primarily the required three feet spacing between solar panels and regulations against the installation of ground mounted solar arrays, which is often the only option for smaller home owners.

“If this ordinance passes like this you will effectively stop solar from going on the roofs of the majority of the houses in this town,” Zerrusen said.

Pals said ordinances like this have become an alarming trend that is making it increasingly difficult to install efficient solar energy systems for homes and businesses in the area.

“They pass these ordinances and that trickles down to Effingham and to Altamont,” he said.

Ordinances regulating the spacing between the ridges of the roof are often put in place to ensure firefighters have access to certain areas in the event of a fire. However, Pals doesn’t seem to think reducing the spacing should be much cause for alarm.

“We’re all about safety,” Pals said.

Pals said that Teutopolis should follow suit with the Effingham City Council and modify the ordinance to reduce regulations.

The board asked Pals to return with more specifics as they relate to the drafted ordinance. The board’s next regular meeting is scheduled for Oct. 5 at 7 p.m.

• Approved a joint ordinance amending an ordinance made in 2016 to modify local incentives and property tax abatements for the Effingham and Effingham County Enterprise Zone.

• Approved an ordinance allowing golf carts to cross any road that crosses the highway.

• Approved an ordinance authorizing the first amendment to the TIF district Redevelopment Agreement between the Village of Teutopolis and SRMD Solutions.