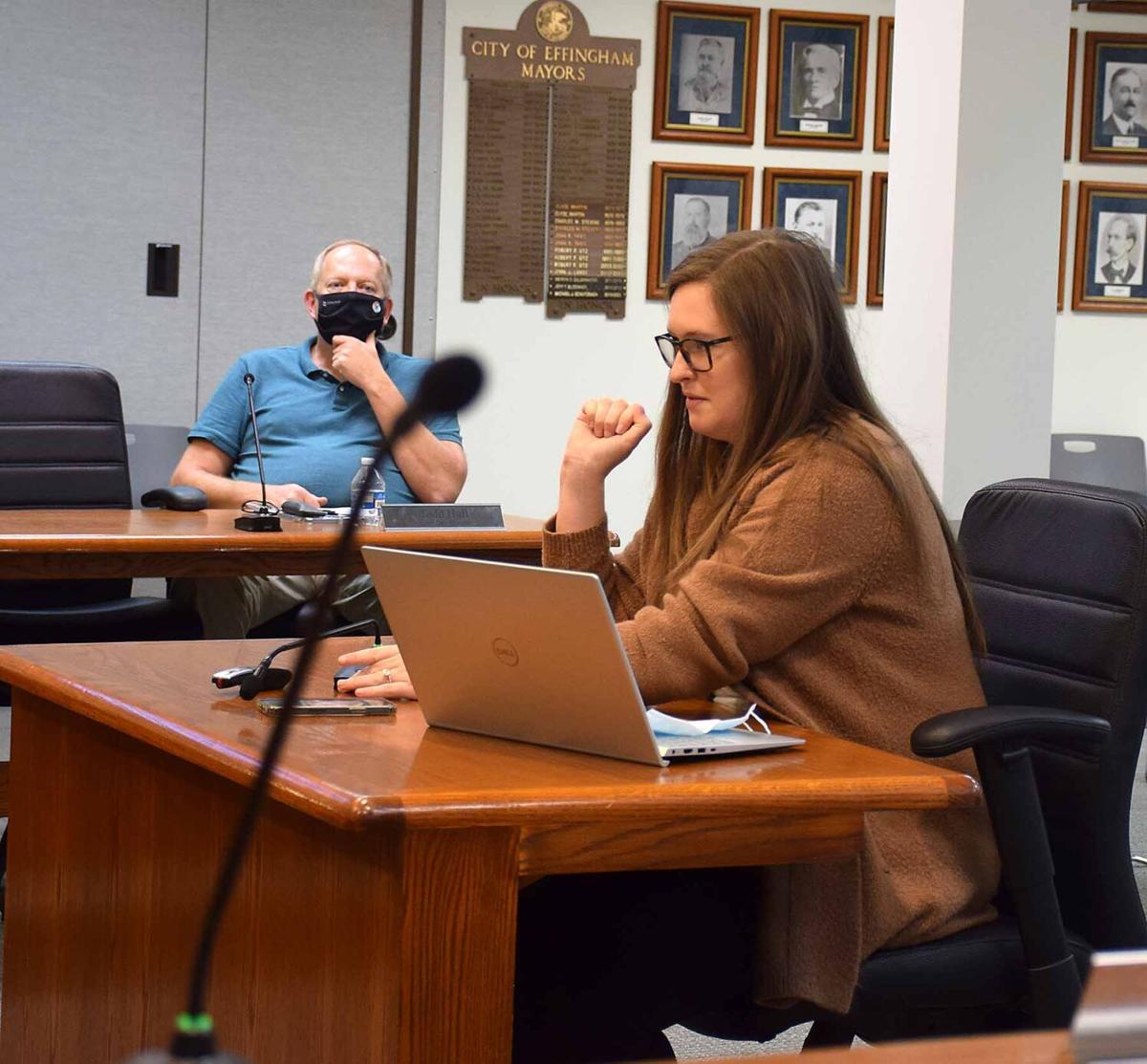 Effingham City Treasurer Caitlin James discusses the fire and police pension evaluations Tuesday during the Effingham City Council meeting. The actuarial report was included as part of an evaluation of the city’s tax levy. 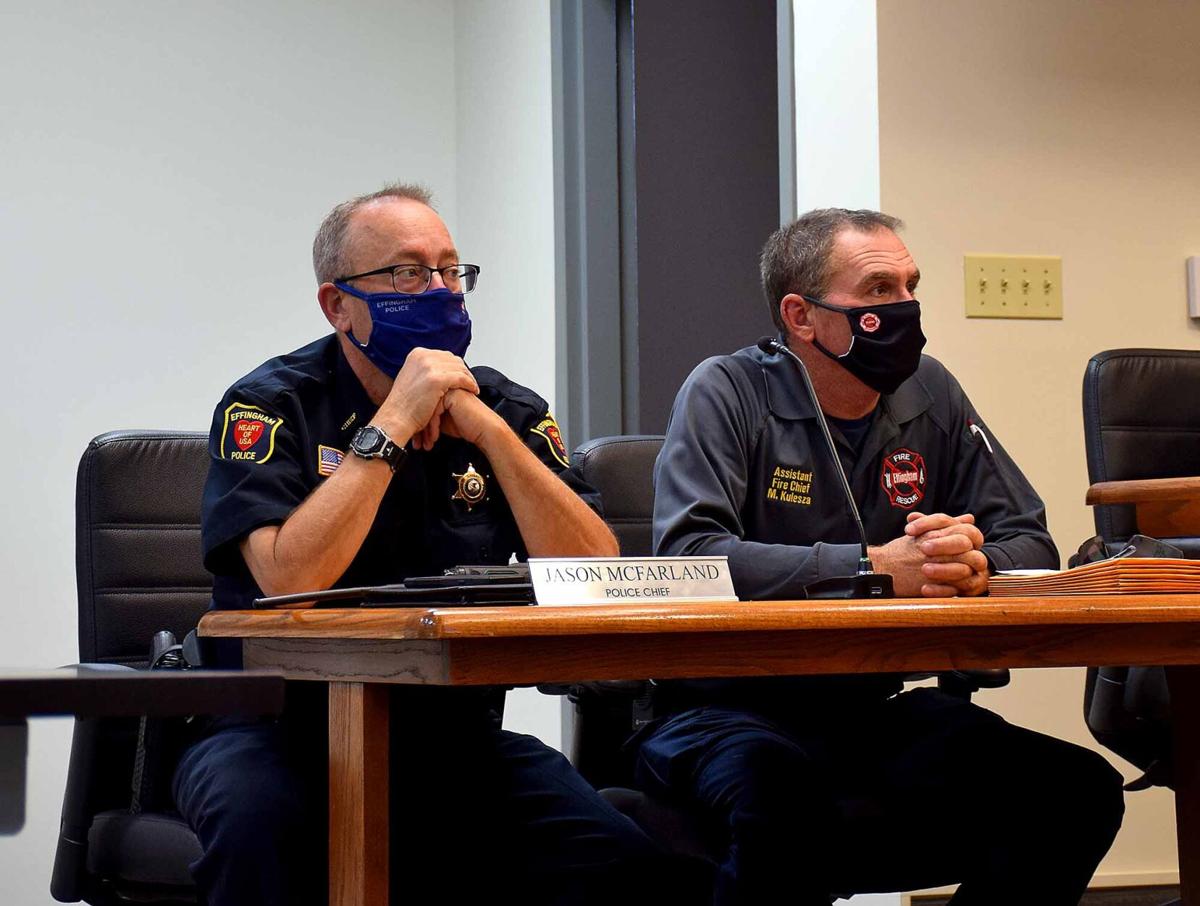 Effingham City Treasurer Caitlin James discusses the fire and police pension evaluations Tuesday during the Effingham City Council meeting. The actuarial report was included as part of an evaluation of the city’s tax levy.

EFFINGHAM — The Effingham City Council is unlikely to make any major changes to the city’s tax levy assessment after options were presented to them this week. But one possibility is a modest decrease in the levy.

Most board members and Mayor Mike Schutzbach leaned toward either keeping rates stable or having them decrease, saying that it would ease the burden on taxpayers. The mayor said he was willing to put any potential increases in the levy to the side, hoping for stability or a small decrease.

“We’ve got a lot of good things going on,” Schutzbach said. “We know what’s been coming in has been very beneficial to us. I know there’s a lot of unknowns, like what will product cost, but I think we can offset that with where we sit currently. I don’t want to overburden with taxes just for fluff.”

Council member Hank Stephens said the board had the opportunity to reduce people’s taxes through the levy, stating an increase in the city’s estimated assessed valuation to over $300 million ($310,399,818 to be exact), along with increases in sales and gaming taxes, allowed them to put less of the city’s burden on the taxpayers.

Larry Micenheimer agreed, stating they had a chance to give those living in Effingham a breather when it comes to taxes.

“From day one, that’s one of the things that we wanted to address — how the in-town people’s taxes were higher than the surrounding area,” Micenheimer said. “Here’s a chance to set an example for the other taxing bodies — to reduce the rate and give the taxpayers a break this year.”

However, Merv Gillenwater warned that with gas prices on the rise and the cost of transportation going up as a result, it would be beneficial to the city to remain stable and wait for the impact of inflation on the city’s coffers.

“If we were where we were last year, I would say, ‘Let’s do (a tax cut),’ but I don’t know how we’re going to be affected,” Gillenwater said. “I don’t think anybody does at this point.”

The meeting was largely used to evaluate different options, not to make any final determinations on what the levy will eventually end up being. Miller said that things would be stable for this year at least; however, future years may end up being more drastic in terms of their impact on the taxpayer.

“We’re not asking the council for a large increase or decrease,” Miller said. “Just a good, stable number since the EAV is going up and things seem to be doing well. Next year will be a bigger shift because the TIF will be coming off and a lot of the EAV from the TIF will be going back into the general fund.”

• Examined actuarial evaluations for fire and police pensions, through a review done by Lauterbach and Amen, LLP, a certified public accountant based out of Naperville. Recommended contributions for firefighters have decreased to $925,635 from $936,903 previously, now making up 67% of the expected payroll from 70% previously. On actuarial value, the fire account is now 59.81% funded, an increase of 2.64% from where it was previously. On the police side, recommended contributions have increased to $913,281 from $882,266 previously. The account is now 69.29% funded, a slight decrease of 0.12% from previous.

• Approved a measure to install a series of stop signs at the corners of West Flamingo Avenue and North Penguin Street and West Flamingo Avenue and North Main Street. Micenheimer said the measure was an example of democracy in action, citing the 140 people who signed a petition to bring it to the council’s attention. The measure passed 4-1, with Gillenwater voting against, citing a lack of evidence to the signs’ impact.