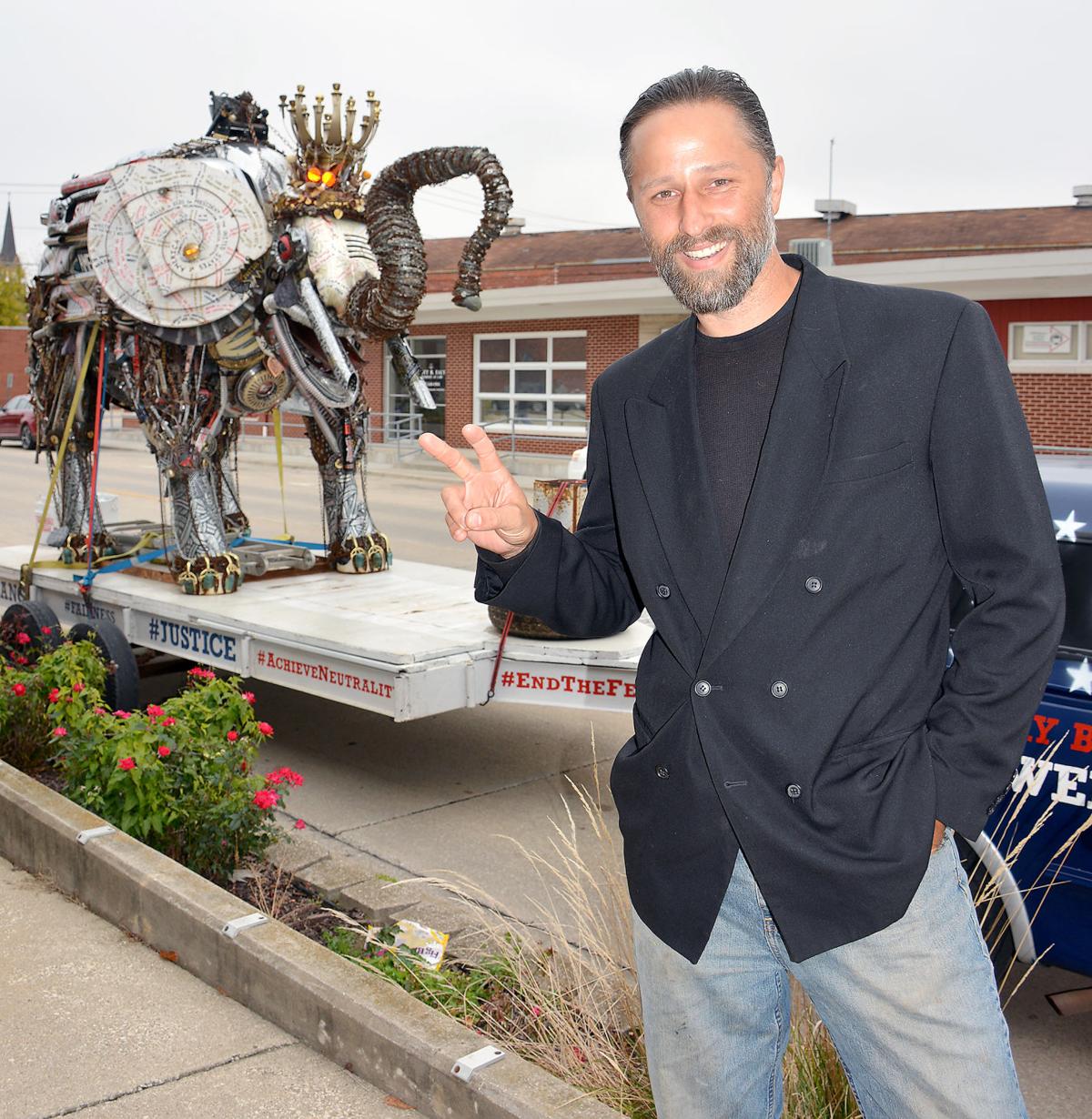 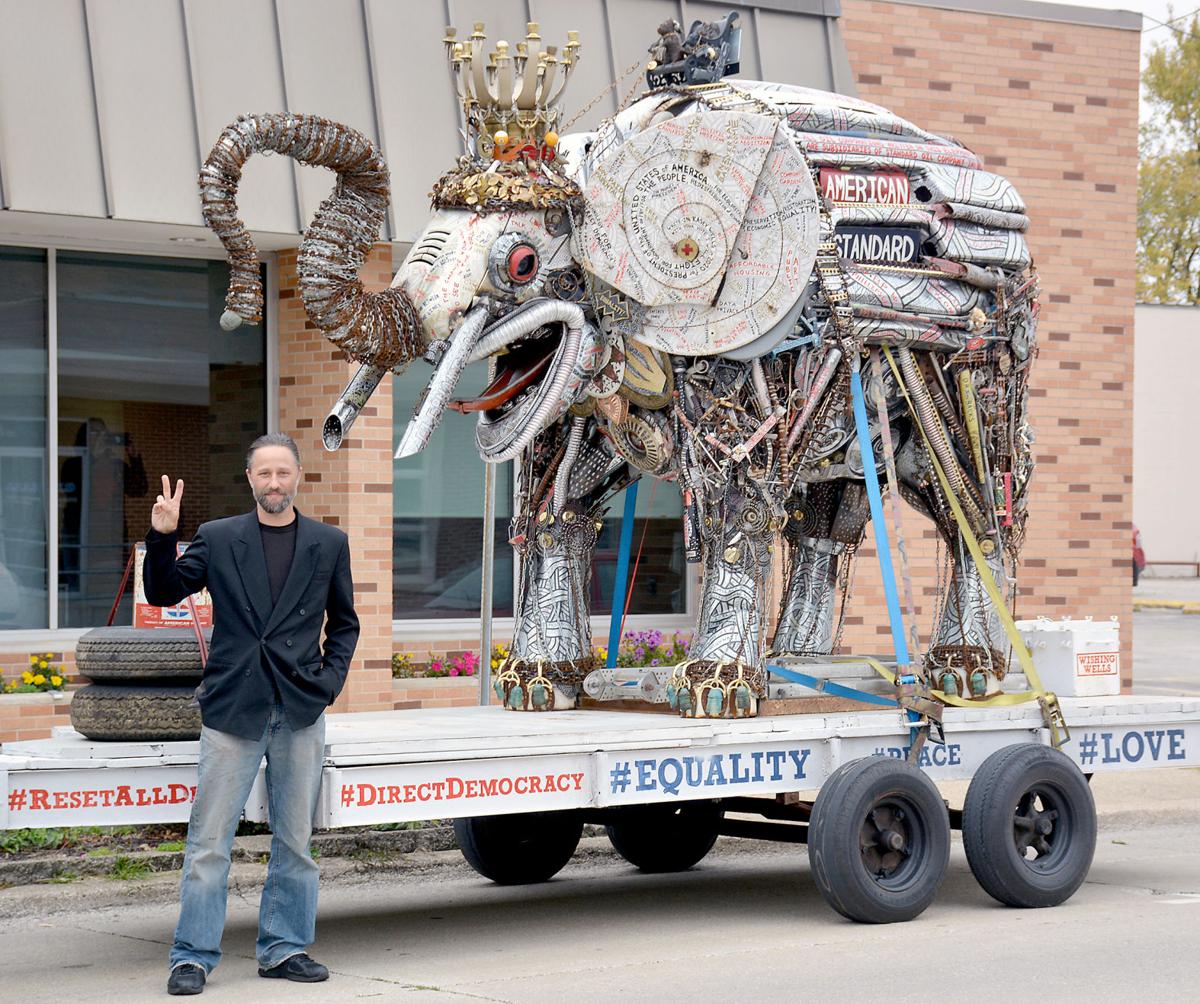 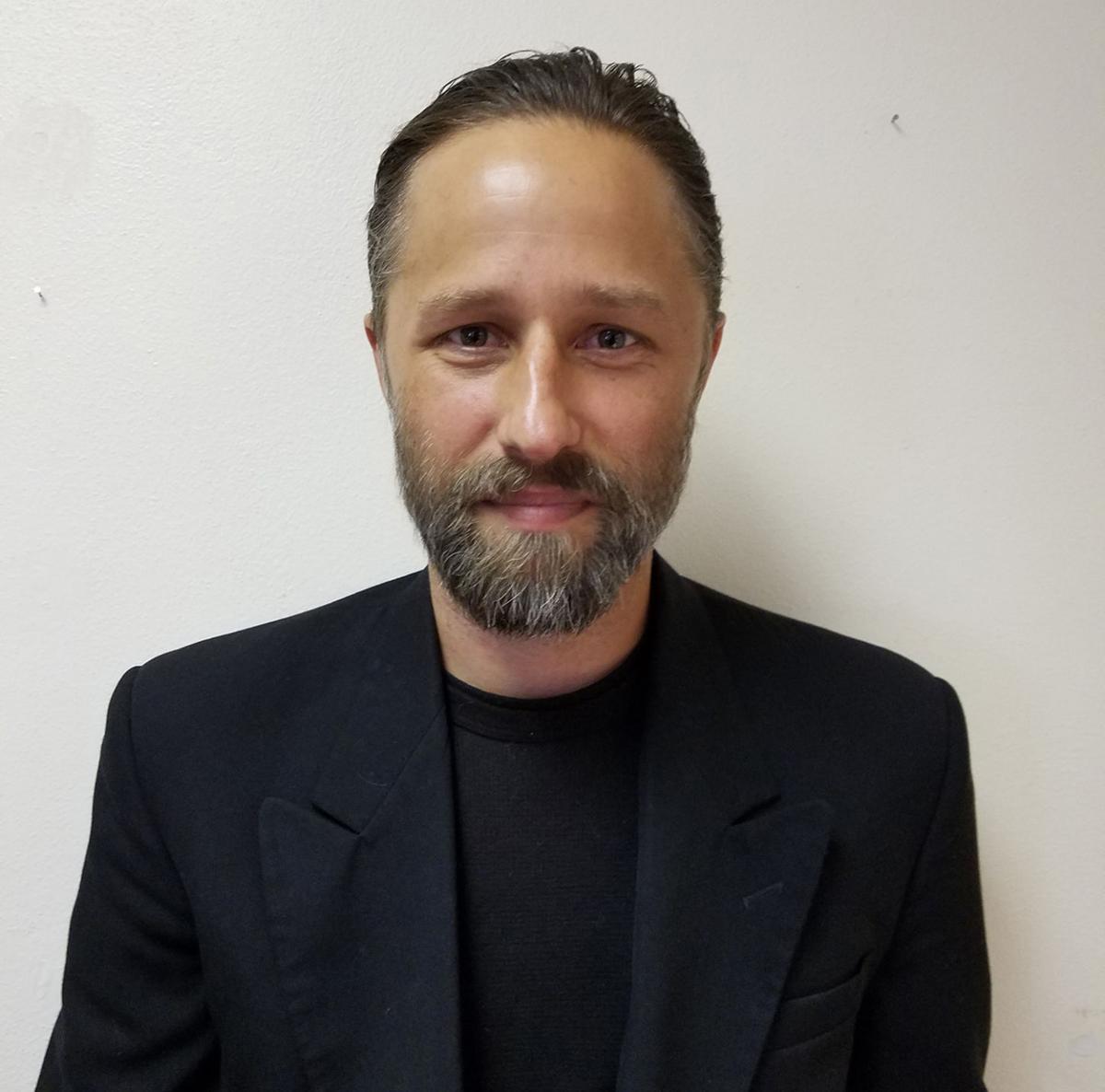 The 41-year-old would be the youngest ever elected president should he win the long-shot chance, and he’s campaigning in a non-traditional, low-funded way — while towing a large metal-sculptured elephant, which he made himself.

Wells calls his elephant “American Standard” and a chunk of it is made from an old Standard Oil farm fuel tank. It has some hubcaps, chains, pipes, metal tools, baseball bats, large springs, exhaust systems, and plenty more, worked into the sculpture.

During the past month or so, he’s driven 7,000 miles towing his elephant in a figure 8 pattern across the U.S. He’s made many stops along the way, including the nation’s capital, New York, Chicago, St. Louis, Indianapolis, Detroit, Cleveland, Boston, Philadelphia, Pittsburgh and smaller cities in between.

People who see the painted truck towing the elephant usually want to talk and Wells estimates 95 percent show him “love and respect” and “encouragement.”

Wells’ campaign was sparked in September by an art contest in Lenoir, North Carolina, where took the sculpture and won the People’s Choice Award, $500 prize, and Best of Show, $3,000 prize.

“I used that money to begin my campaign and then went to Washington, D.C., immediately,” said Wells. “I got a picture of me and my elephant in front of the White House.”

He also has a GoFundMe page to help with his travel and campaign expenses.

Wells would like to prove to the American people you don’t have to have millions of dollars to win the election.

“All you need is the support of the public,” said Wells.

Wells is now married and he and his wife, Rachel, who is originally from London, England, have a 9-month-old daughter, Zada.

Wells earned a bachelor’s degree in fine arts and a master’s degree in arts technology, both from Illinois State University. He had taught in the arts technology department for about a year, specializing in sculptures, painting, photography, video, glass and more. He left teaching in 2009.

A self-described “starving artist,” Wells said he does whatever he’s inspired to do. In 2012, he started scrapping metals to get by. In 2016, he began building metal sculptures and garnered a few commissions for his work.

“Scrapping for America” is painted on the side of his 1997 Ford F-150 pickup truck, which he said relates to his livelihood and campaign, as he’s “Fighting for the American people.”

“The elephant is made of scrap metals that I’ve gathered,” said Wells. “My other tag line is ‘Let’s take our country back.’”

Wells said had help creating the sculpture from a friend, Kyle Riley, who is a Chicago painter. Riley painted the patterns and with teachings from Wells, he helped weld and sculpture. The shiny sculpture weighs 1 ton, stands 11 feet tall, is 13 feet long and 7 feet wide.

“I knew I wanted to run for president, so I decided this could be my transition piece from making art into politics,” said Wells. “I expressed my politics all over the elephant.”

Words such as “affordable housing,” “end poverty,” “data privacy,” “holistic medicine,” “save the planet” and “end war” adorn the elephant.

Also written on the elephant is “Keeping Government Honest.”

“It’s politics made simple,” said Wells. “My solution is direct democracy. I want to build a government-based website that will allow all U.S. citizens to log on, view upcoming government agendas on all levels – give input on the agendas.”

Using his method, Wells believes the best input will rise to the top. That should then be used to create public policy.

“We should use wisdom of the public to direct our public policy. We’d be in a much better place,” said Wells. “The gap between the rich and the poor keeps growing every day. Economic development initiatives are a large part of the imbalance. I want to correct the imbalances.”

Even though Wells has not held a public office, he said he’s not afraid to ask questions at his local city hall. He likes to dig to find out who is funding organizations. He said “nine times out of 10” it leads him back to the Rockefeller family.

“I’m probably the biggest anti-Rockefeller there is,” said Wells. “Their greed is endless. They have a lot of devastating effects on people and the Earth.”

Wells said he’s frustrated with the Trump administration, but doesn’t believe Trump is at the core of corruption in America. He finds it frustrating to watch the Democrats “waste time going after the president,” when they could be better serving the public.

“I’m not pro-Trump, but he is the president and deserves some level of respect.”

Wells says this country has created a political circus around Trump.

“I think I’ll do a better job fighting for the general public,” said Wells. “I’d like to end war, bring home our troops, and focus our military on American problems. I’d like to end the Federal Reserve System.”

He said the U.S. Treasury could take over the Federal Reserve System’s responsibilities.

“I’m here to provide the people an alternative of voting for the lesser of two evils,” said Wells. “Forty-two percent of the voters in America identify themselves as Independent. There really isn’t a strong Independent voice running for President and I want to be that voice. People are frustrated. If I can get that 42 percent to come out and vote for me, then we’ve got it.”

Wells said he wants to be a candidate of the people, working for the people and who wants to create a country by the people through direct democracy.

Wells said if he’s elected he will do everything in his power “to return the United States of America back to the American public.”