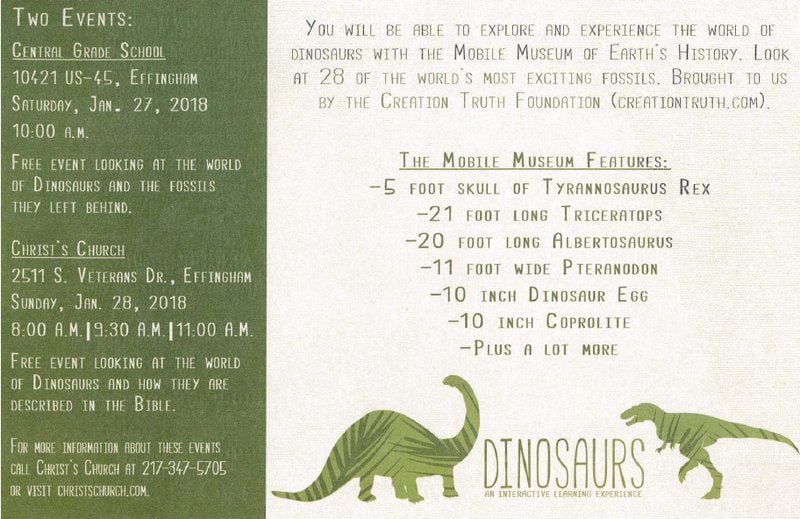 Shown is the version of the flyer for the dinosaurs event circulated in the general community. 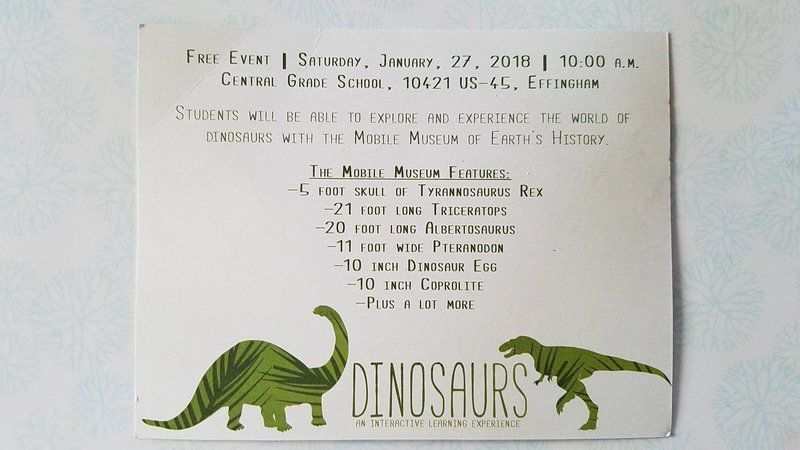 Shown is the flyer that students took home Friday after a presentation about dinosaurs.

Shown is the version of the flyer for the dinosaurs event circulated in the general community.

Shown is the flyer that students took home Friday after a presentation about dinosaurs.

Some parents thought they were bringing their children to learn about dinosaurs on Saturday at Central Grade School in Effingham. But they said the program turned out to be about a creationist view of thunder lizards, put on by a group called the Creation Truth Foundation.

The confusion was unintentional, organizers and school officials said Tuesday.

"We've had a lot of positive feedback from parents," Doan said, noting the presentation was non-religious.

"If there is something that piques kids interest in learning on a Friday, we're all in for it," said Doan.

When students left that day, they took with them a flyer handed out at school saying that there would be more dinosaur information during a program at the school the next day.

Kenny Martin took two of his children to the event.

Martin thought the event was sponsored by the school. The flyer brought home made no mention that the presenters were members of a creationist movement.

"It's really strange what he was believing," Martin said. "That there were dinosaurs on Noah's Ark and humans walking with dinosaurs."

Martin said the crowd of between 100 to 200 people was simply too large for his children, ages 4 and 6. And the theories being developed were beyond their understanding.

"The worst part about it was the kids were disappointed," Martin said.

The paper sent home with the children states the time, date and location of the event and that it would feature a variety of dinosaur fossils.

"Students will be able to explore and experience the world of dinosaurs with the Mobile Museum of Earth's History," the message reads.

It does not mention the fact that the organization putting on the event was Creation Truth Foundation, which believes everything was created within six days, as set out in the Book of Genesis.

The Creation Truth Foundation describes its mission as a restructuring of American society to a more biblical basis.

Groups with religious or other beliefs can rent school facilities during non-school hours, Doan said.

"We have a public building. There's certain parameters, and if they meet those parameters, they're fine," Doan said.

The program was brought to the area by Jeff Michael, the president of Unit 40 School Board and pastor at Christ's Church in Effingham. The church offered to have the group make its Friday presentation during school hours and district officials agreed, according Michael.

The church rented the school from the district on Saturday, he noted. Matt Miles, of the foundation, spoke during both events and at the church's service on Sunday.

There were two flyers circulated through the community. The one given to students makes no mention of the Creation Truth Foundation, simply listing the event and some of the fossils on display.

The flyer in the larger community mentioned the church's involvement and that the museum was brought by the Creation Truth Foundation.

Michael explained the difference was the result of limitations on free speech within a school setting.

"We have limited free speech in a public school," he said.

He said that mentioning the church element of the Saturday event would have crossed the line separating church and state.

"It was not anybody's intent to be deceptive," Michael said.

He acknowledged they could've sought to be clearer in information about the difference between Saturday's event and Friday's presentation.

Doan agreed that they could work on making it clearer which events were sponsored by the school and which were by outside organizations.

After the speech on Saturday, Miles remained in the area, speaking to Christ's Church.

During a presentation available on the church's website, he defines worldview as "a set of beliefs based on a foundation of truth we use to view and guide our life."

"But for me, my worldview begins and ends with this, and I don't care what I am studying," Miles said in his speech.

Miles declined comment for this story, directing questions to Michael.

Graham Milldrum can be reached at 217-347-7151 ext. 131 or by email at graham.milldrum@effinghamdailynews.com