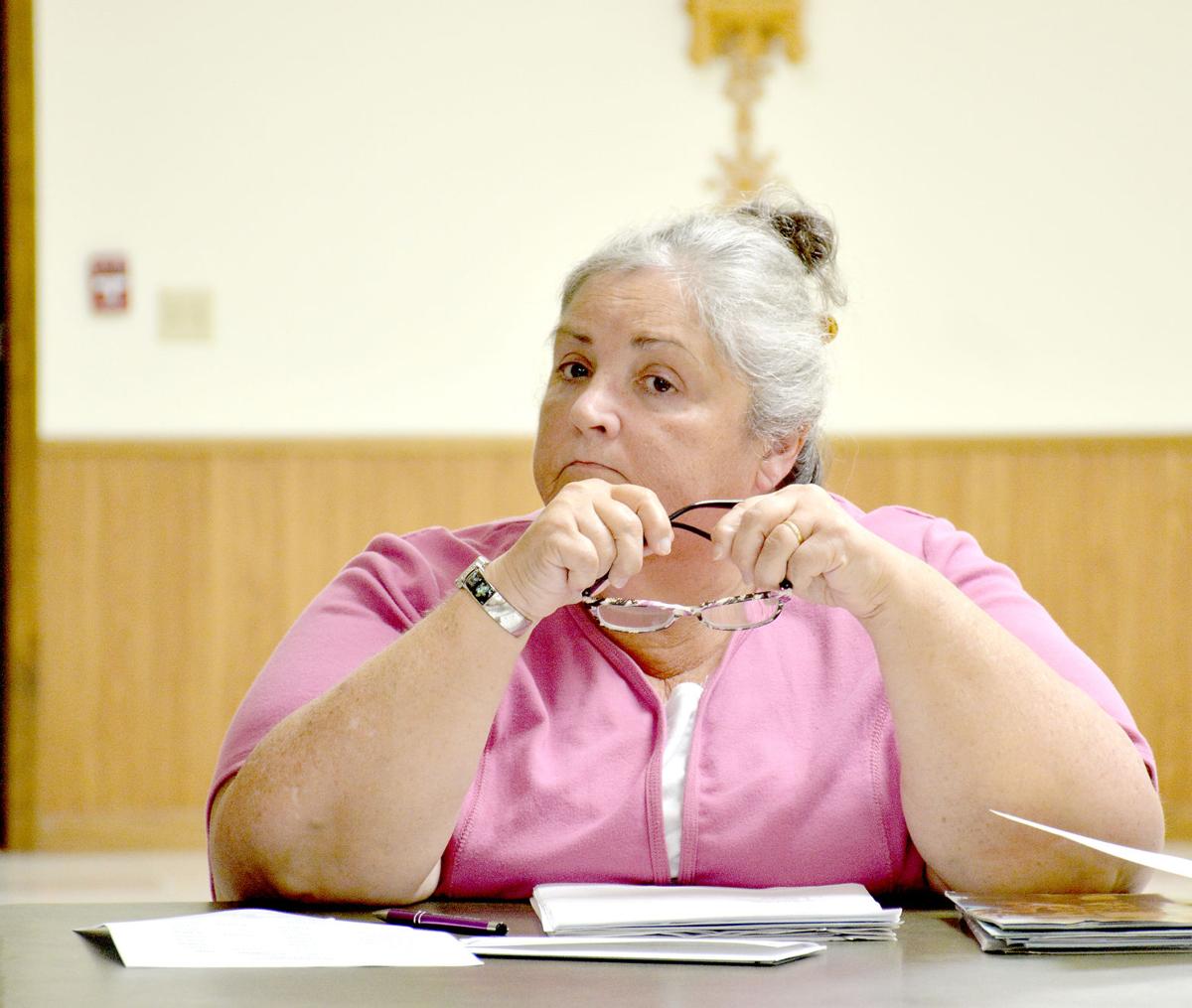 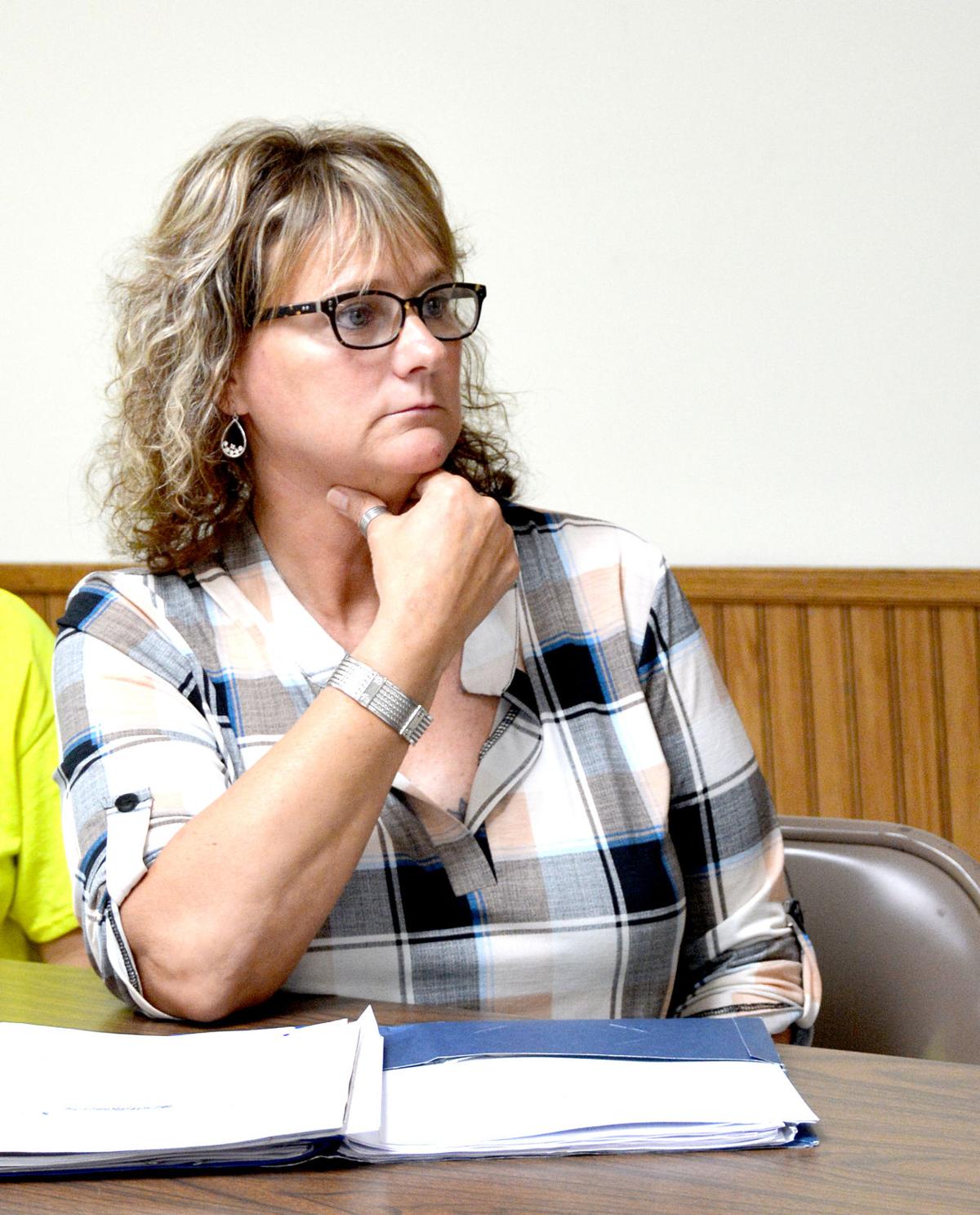 Chris Cripe, owner of On The Rox Pub and Grub of Altamont, listens to the Beecher City Village Board Monday night at Beecher City Area Kluthe Center. Cripe plans to build a restaurant in Beecher City at the intersection of Illinois Route 33 and South Myrtle Street.

Chris Cripe, owner of On The Rox Pub and Grub of Altamont, listens to the Beecher City Village Board Monday night at Beecher City Area Kluthe Center. Cripe plans to build a restaurant in Beecher City at the intersection of Illinois Route 33 and South Myrtle Street.

BEECHER CITY — The Smokin’ B restaurant in Beecher City let its liquor license expire in April.

Over the summer, the owner of Altamont’s On The Rox Grub and Pub began eyeing that license as one hook for opening a restaurant of her own. Village officials recently granted owner Chris Cripe permission to build a restaurant across the street from the Smokin’ B and awarded her the sole liquor license available in Beecher City.

Now, Smokin’ B owner Nikki Burrus wants the liquor license back. And she has asked officials to allow gaming in the village, which is being considered.

“So, if you get a liquor license, it would include gaming,” she said.

To give Smokin’ B a liquor license, village officials will also have to amend the ordinance to allow more than one liquor license in the village.

Caleb Burrus asked the village board if their liquor license would have the same privileges as the one approved for On the Rox owner Cripe.

“You would have to reapply,” Village Clerk Terri Doty said. “You don’t have a liquor license.”

Board Trustee Stacey Bowlin said the Class B liquor license would be the same for everyone.

“Currently, there is only one (license) that is available,” Village Trustee Jason Wells said. ”You can apply, and then the board will take it up to vote on it.”

Nikki Burrus asked whether the trustees would vote on it at the next scheduled board meeting. The board told her if her application is on the agenda for next month, and only if trustees decide to approve the license, it would take some time for the attorney to draw up a new Class B ordinance allowing two Class B liquor licenses for the village.

Meanwhile, Cripe updated the board on her business plans.

At last month’s meeting, she was exploring the possibility of purchasing the Smokin’ B restaurant property, tearing down the existing structure and building a new building.

But Cripe said she has since purchased a vacant 1 1/2-acre lot at the intersection of Illinois Route 33 and South Myrtle Street from Ray Bower. She presented the board with her plans to build a new building for the restaurant.

She told the board that, depending upon the weather, her target date for opening is March or April.

The board voted unanimously to amend its meeting agenda to approve a building permit application for Cripe at the corner of Illinois Route 33 and South Myrtle Street.

Linda Gatewood and Kelsey McConkey came to the meeting with concerns about the new business coming to town.

Gatewood appreciated the business would be bringing revenue to Beecher City, but expressed concern about the kind of people it would attract.

“What we’re concerned about is what it might bring in,” Gatewood said.

“I firmly believe what they are adding to the community is going to be a bonus,” said Village Trustee Stacey Bowlin. “If I didn’t believe that, I wouldn’t have voted for it.”

Cripe said the hours would be from 6 a.m. to 10 p.m. Bowlin believes since it was closing early and not an open tavern that it wouldn’t attract the clientele Gatewood was worried about.

“I wouldn’t feel comfortable with having a full open tavern in the town,” Bowlin said. “So I voted with my conscious.”

Village Trustee Dail Schonschack said he personally isn’t a fan of the idea of having any kind of drinking establishment or alcohol in town. He said his decision to approve the Class B license was because of the requirement of having a meal with a maximum of two drinks.

“What these people are offering us is a viable business, plus a place where young people can go and have something to do,” Schonschack said. “Activities for young people is something this community needs.”

Cripe said at the August meeting the new establishment would be a family restaurant that would include a game room for teenagers, limited live entertainment and a closed-off isolated gaming room for those 21 and older with strict security access requiring an ID to get in.

“Again, I’m against alcohol, but I want a business here in this town,” Schonschack said.

Cripe asked whether the village still plans to be included in the Enterprise Zone proposed by the City of Altamont.

Luke Eastin, representing South Central Illinois Regional Planning and Development Commission, and Altamont Mayor Jason Rippetoe presented the enterprise zone proposal to the board in April. Bowlin was appointed enterprise zone liaison in May for the Village of Beecher City.

Doty told Cripe the village is still interested, noting the representative from the South Central Illinois Regional Planning and Development Commission left his job and they were waiting to hear who his replacement would be.

Meanwhile, Beecher City businessman Truman Rhodes told the board he is still interested in building a teen center in the village. He’d put his son, who is currently attending college, in charge of the project. Rhodes first brought up the idea during the August board meeting.

“I would like you and everyone to get involved in it,” Rhodes told the board.

In other business, the board: