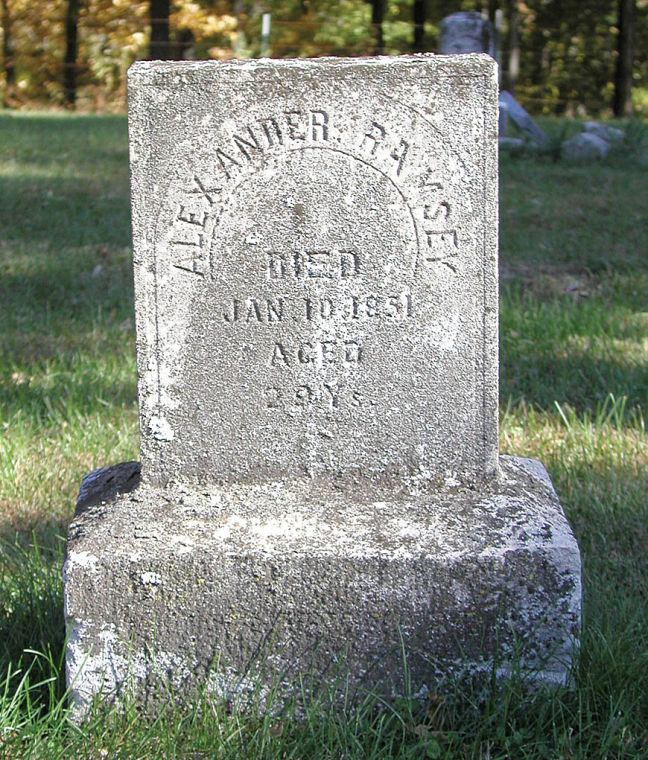 The grave of 29-year-old Alexander Ramsey, who died in 1851, is believed to be the first marked burial in Ramsey Cemetery. 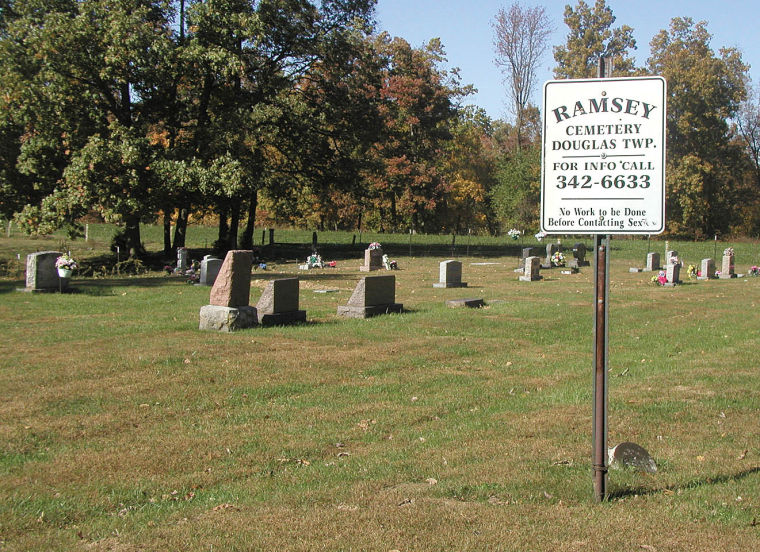 Ramsey Cemetery, also known as the Casbar, is a popular nighttime hangout, located about six miles north of Effingham, and rumored to haunted.

The grave of 29-year-old Alexander Ramsey, who died in 1851, is believed to be the first marked burial in Ramsey Cemetery.

Ramsey Cemetery, also known as the Casbar, is a popular nighttime hangout, located about six miles north of Effingham, and rumored to haunted.

Is it possible Effingham’s most popular cemetery hangout is haunted? Effingham’s youth have headed out to Ramsey Cemetery, also known as Casbar, Casbah or Kasbar cemetery, as a popular nighttime retreat for generations. “They used to have parties galore here on the weekend. There’s a nice parking place out there, so lovers come out all times of day and night,” said Paul Schmidt, who has been the cemetery’s caretaker for the past 15 years. Schmidt said he’s never seen any ghosts at the cemetery, though he doesn’t go out there at night. Driving out to the cemetery, it’s easy to understand why so many people believe the area is haunted. In order to get to the cemetery, located about six miles north of Effingham, one must drive on a narrow, winding road through large trees towering overhead. The cemetery itself is quite isolated, surrounded by a forest, and many of the tombstones are old and in ruins. Many Web sites contain strange rumors about Ramsey, including this description from www.communitywalk.com. “There have been many strange things reportedly happening here. This old cemetery is supposed to have several haunted caves. There have also been reports of a werewolf and a man cloaked in black with red glowing eyes.” The cemetery is even featured in a 2007 book “The Illinois Road Guide to Haunted Locations” by paranormal investigators Chad Lewis and Terry Fisk. According to information from “Effingham County, Illinois Past and Present” by John Russell, Ramsey Cemetery began as a private project, when 29-year-old Alexander Ramsey was the first marked burial there in 1851. Three more Ramseys were buried within three years, and it soon became a community cemetery. Among the many people who have ventured to the cemetery at night are local paranormal investigators, Rhonda and Cassie, an aunt and niece team from Effingham who wished only to be identified by their first names. After getting permission from the owner, they investigated Ramsey Cemetery several times in 2004. “It’s always been a big party spot, and there’s been tons of legends about cloaked figures, ghostly figures on horseman, werewolves. Most people have a story about it,” Cassie said. “One of the stories I’ve been told is that people go up and find a tombstone and leave a penny on it, and they will come back and it will be changed. I think one of the most popular stories I’ve heard is the cloaked figure with the red eyes. There’s also been several reports of strange lights and strange sounds,” she said. Rhonda said they use a digital and 35 mm cameras and a video camera with night vision during investigations. While the team has found some evidence in other locations, they did not find anything at Ramsey. “We’ve done a couple investigations, and we’ve never got anything ourselves, but I’m not saying there’s nothing out there,” Cassie said. When asked about the rumors of haunted caves in the area, Cassie said she thinks the caves are actually small indentations in some rocks next to the creek that flows near the cemetery, but she’s not sure, because the supposed caves are on private property. In all her research, Cassie has never found the origin of the cemetery’s nickname, the Casbar, though she has heard rumors it was named after the song “Rock the Casbah,” a popular 1982 song by “The Clash.” Although, others say the place had the name before the song came out. However, Audrey Garbe and Eleanor Bounds, of the Effingham County Genealogical and Historical Society, said Ramsey has been known as Casbar for longer than that. They suspect the cemetery got its nickname from “Algiers,” a popular 1938 movie that was the first time many Americans ever heard about the Casbah, the city center of the capital of Algeria, Algiers. Area residents may never know what actually runs the grounds of Ramsey cemetery at night, but its legend will likely live on. “It’s the local haunt. Every town’s got a place everybody says is haunted, and that’s Effingham’s,” Cassie said. Angie Faller can be reached at 217-347-7151 ext. 131 or angie.faller@effinghamdailynews.com.