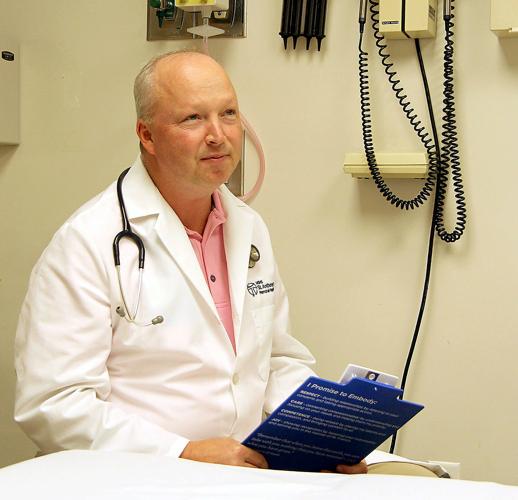 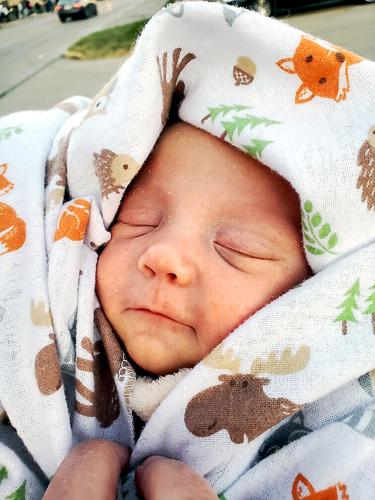 First-time mother Kaitlin Eskew saw signs that her 3-month-old had RSV and took her to the emergency room. The infant recovered at home and is now doing well. 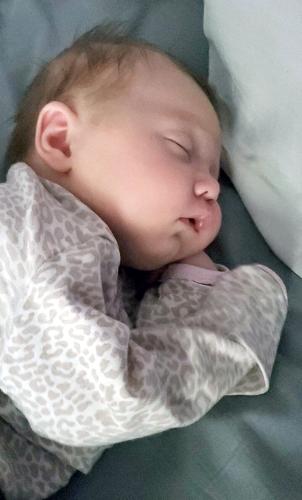 The highly contagious respiratory syncytial virus, commonly known as RSV, which affects the nose, throat, lungs and breathing passages — sometimes in a debilitating way — is on the rise in the Effingham area this season.

According to Dr. Ryan Jennings, chief medical officer at HSHS St. Anthony’s Memorial Hospital in Effingham, cases of RSV are up significantly this year.

“Over the past few years, we had been masking and not going out as much, but with being back to normal life, the cases are rapidly rising this year,” said Jennings.

Affecting the lungs and breathing passages, RSV can be spread through droplets when someone coughs or sneezes. It can also live on countertops, doorknobs, hands and clothing.

“Although most RSV infections appear as colds, some can be severe enough to require hospitalization,” said Jennings. “Most kids are infected with RSV at least once by age 2 years.”

In simple terms, RSV causes patients to struggle with excess mucus. That then leads to other issues and can become serious if not monitored closely.

First-time mom Kaitlin Eskew of Effingham noticed something was different in how her 3-month-old daughter started to breathe. She noticed the infant was breathing heavily on Nov. 9.

“I immediately did what all new mothers do and looked up her symptoms on Google,” Eskew said. “I watched a video of what breathing looks like when an infant has RSV and decided to take my daughter to the emergency room.”

The nurses in the ER at St. Anthony’s Memorial Hospital’s assessed Eskew’s infant and took a nose swab to test for RSV. The result was positive, but the baby’s symptoms did not warrant a hospital stay.

Eskew said her daughter’s symptoms included a raspy cough, low grade fever, a low appetite and tiredness. Her infant also struggled to keep breast milk down and would vomit immediately following a feeding.

“My husband and I had trouble sleeping those first few nights after learning she had RSV. We would stay up and just watch her breathing and make sure she was upright when she coughed,” Eskew said. “Even though we weren’t in the hospital, it was a very scary time for us. We hated knowing that she was struggling to breathe and had trouble eating.”

The Eskews saw their daughter’s pediatrician soon after the RSV diagnosis. Eskew said the doctor noted that the infant’s case was mild and that she had gotten over the worst of it within three days of her positive swab. The doctor added that this would likely be the first of multiple viruses Eskew’s daughter would encounter as an infant.

Eskew and her husband were instructed by the pediatrician to use saline spray in their baby’s nose and suction mucus from her nose and mouth before each feeding every two hours. They also gave her Pedialyte to help prevent dehydration and ran a cool mist humidifier in their daughter’s room each night.

“We were relieved that her case and symptoms were mild. We were very lucky,” Eskew said.

Eskew added that she and her husband learned their child likely got RSV from another child she was exposed to the week prior to the start of her symptoms. The pediatrician said the baby’s cough would likely last for at least three weeks after she has recovered from her symptoms.

Eskew said as of Thanksgiving, the infant only coughs occasionally and has returned to her normal behaviors.

“When she was sick, we kept our daughter home and stayed away from our young and elderly family members, too. We didn’t want anyone else to get RSV,” Eskew said. “We wanted to prevent it from spreading.”

The Eskew’s experience was normal and quite common with infants diagnosed with RSV.

“With RSV, infants especially struggle with the excess mucus and their tiny airway passages,” Jennings said on WEIU-TV’s “Being Well” program.

Making sure that babies don’t get dehydrated is vital.

“If you think about it, an infant’s wind pipe isn’t any bigger than our pinky,” Jennings said to WEIU. “If the (airway) is pinched off with too much mucus, it becomes impossible for them to breathe. Usually they need suctioning of the snot, then rehydration.”

“As adults, collectively, we’ve probably had this virus many times over a lifetime,” said Jennings on WEIU. “Typically, it’s a common cold. But, in the elderly when there are other health concerns (in addition) like heart failure, diabetes, being less active, then the virus could become more serious with the excess mucus.”

While there is no vaccine yet available, there are some things people can do to prevent the spread of RSV.

According to the American Lung Association’s website, RSV is “highly contagious.” Each year, an estimated 2.1 million outpatient visits occur in children younger than 5 years of age due to RSV infection.

Jennings is trained in pediatrics and as an internist and worked in private practice for many years. In the “Being Well” interview, he said handwashing is his top advice, especially during cold and flu season.

“My mantra is always handwashing,” he told WEIU TV. “This hand-to-mouth behavior transmits to almost everything. Vaccinations are also important for diseases that are vaccine preventable.”

Numbers for RSV were down during the pandemic because of masking and less interactions with people. The same preventative measures recommended for COVID will help with RSV and flu — social distancing and handwashing, he said.

“Now that we are back to a more normal life, we will see more RSV,” said Jennings. “Unfortunately, it is the No 1 reason for childhood hospitalizations for respiratory illness. It’s still a big deal.”

The CDC suggests if you have cold-like symptoms, do the following to slow the spread of RSV:

• Cover your coughs and sneezes with a tissue or your upper shirt sleeve, not your hands

• Avoid close contact, such as kissing, shaking hands, and sharing cups and eating utensils with others

• Clean frequently touched surfaces such as doorknobs and mobile devices

Also, according the CDC, people with cold-like symptoms should not interact with children at high risk for severe RSV disease, including premature infants, children younger than 2 years of age with chronic lung or heart conditions, children with weakened immune systems, or children with neuromuscular disorders.

If this is not possible, people should carefully follow the prevention steps and wash their hands before interacting with children who are at high risk. They should also refrain from kissing high-risk children while they have cold-like symptoms.

RSV can spread very easily, resulting in large outbreaks in certain areas. People can get infected if droplets from a cough or sneeze get in their eyes, noses or mouths, the local chief medical officer said.

“RSV can spread through direct contact with the virus, like kissing the face of a child who is currently ill with RSV,” said Jennings. “Additionally, RSV appears as a common cold in adults, so it is important to keep in mind that a minor common cold in an adult could cause severe RSV in an infant or young child.”

What to look for, what to do

In toddlers and school-age children, symptoms of RSV typically begin four to six days after being infected and most often include a profuse, clear runny nose along with cough, fever and decreased appetite.

Young infants with RSV can similarly have a runny nose, cough, fever and decreased appetite, but they may also have fussiness and decreased activity. RSV in all children generally progresses gradually, but young infants are at the highest risk for symptoms such as a more severe cough, an increased breathing rate and low oxygen levels.

Young infants with RSV more often develop ear infections and pneumonia and may require hospitalization or ICU admission. Medical providers are on high alert during RSV season, especially with young infants, to observe the sometimes-subtle signs at the beginning of RSV illness to best care for these patients, Jennings explained.

If your child has RSV, here are some steps to follow:

• Closely monitor infants and younger children, especially those born prematurely or with chronic lung or heart disease who have an increased risk of RSV infections.

• Make sure your child washes his or her hands frequently. This is especially important after touching infected surfaces or having contact with someone with cold symptoms.

• At home, make your child with an RSV infection as comfortable as possible. Allow time for recovery and provide plenty of fluids to prevent dehydration.

• Call your child’s pediatrician if your child experiences a high fever, thick nasal discharge, a worsening cough or trouble breathing.

• If your child is experiencing trouble breathing, loss of consciousness, signs of severe dehydration, or a fever of 100.6 or higher for infants younger than 8 weeks, seek emergency care.

With older adults, when they become ill, you tend to see a lot of confusion and disorientation. That’s when they need to be evaluated, too.

“In addition, advanced-age adults with underlying conditions such as diabetes, chronic lung and/or heart disease, can also become very ill from RSV,” said Jennings. “It is important to watch for signs or symptoms of respiratory distress, but staying hydrated and active can help reduce chances of hospitalization and/or pneumonia caused by RSV in older adults.”

According to the CDC, most RSV infections will go away on their own in a week or two. Researchers are working to develop vaccines and antivirals to fight the virus.

CDC also suggests using over-the-counter fever reducers and pain relievers, such as acetaminophen or ibuprofen. The infant or person should drink plenty of fluids to prevent dehydration. Most importantly, talk to your health care provider before medicating a child.

Dr. Ryan Jennings was interviewed on RSV on WEIU-TV’s “Being Well” program. That interview can be viewed at youtu.be/x3ZBBB5ZIL8