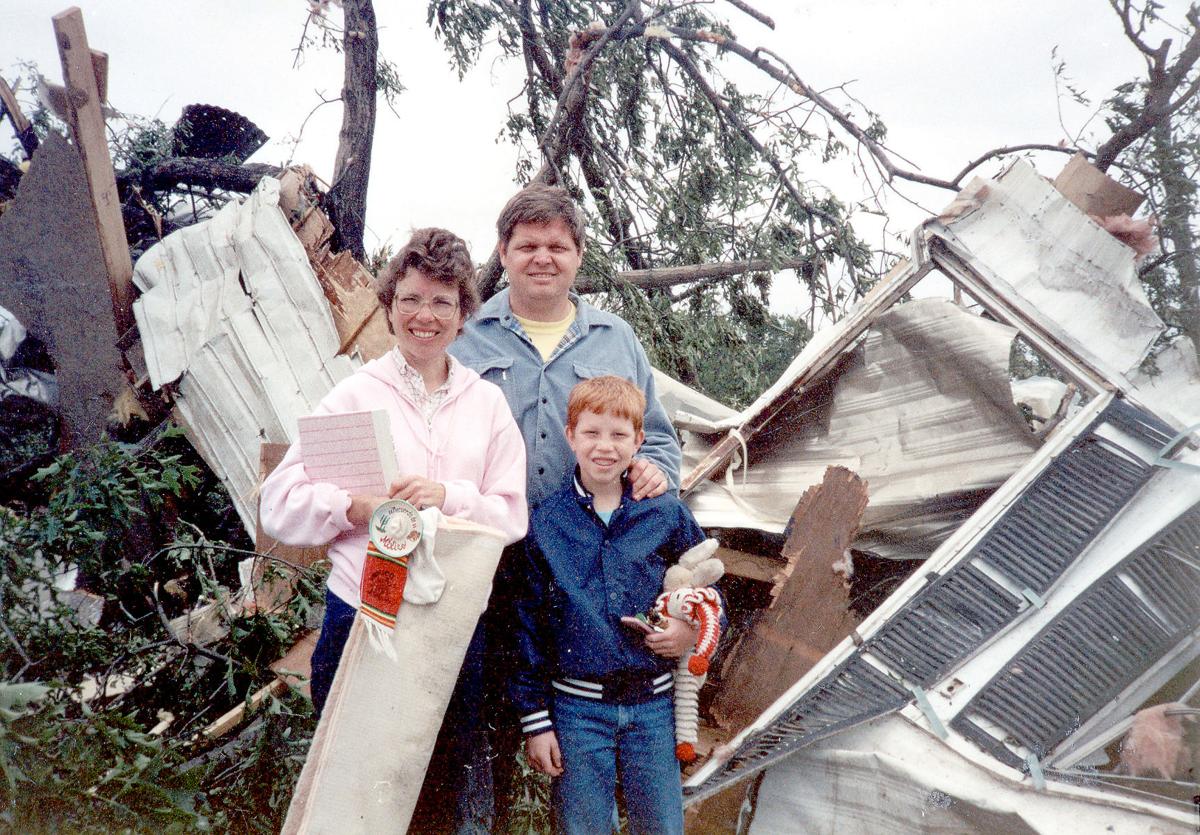 This photo was taken of the Schmidt family after an EF4 tornado destroyed their mobile home in Newton in June of 1990. Pictured, from left, are Karen and Rein Schmidt and son Eric. 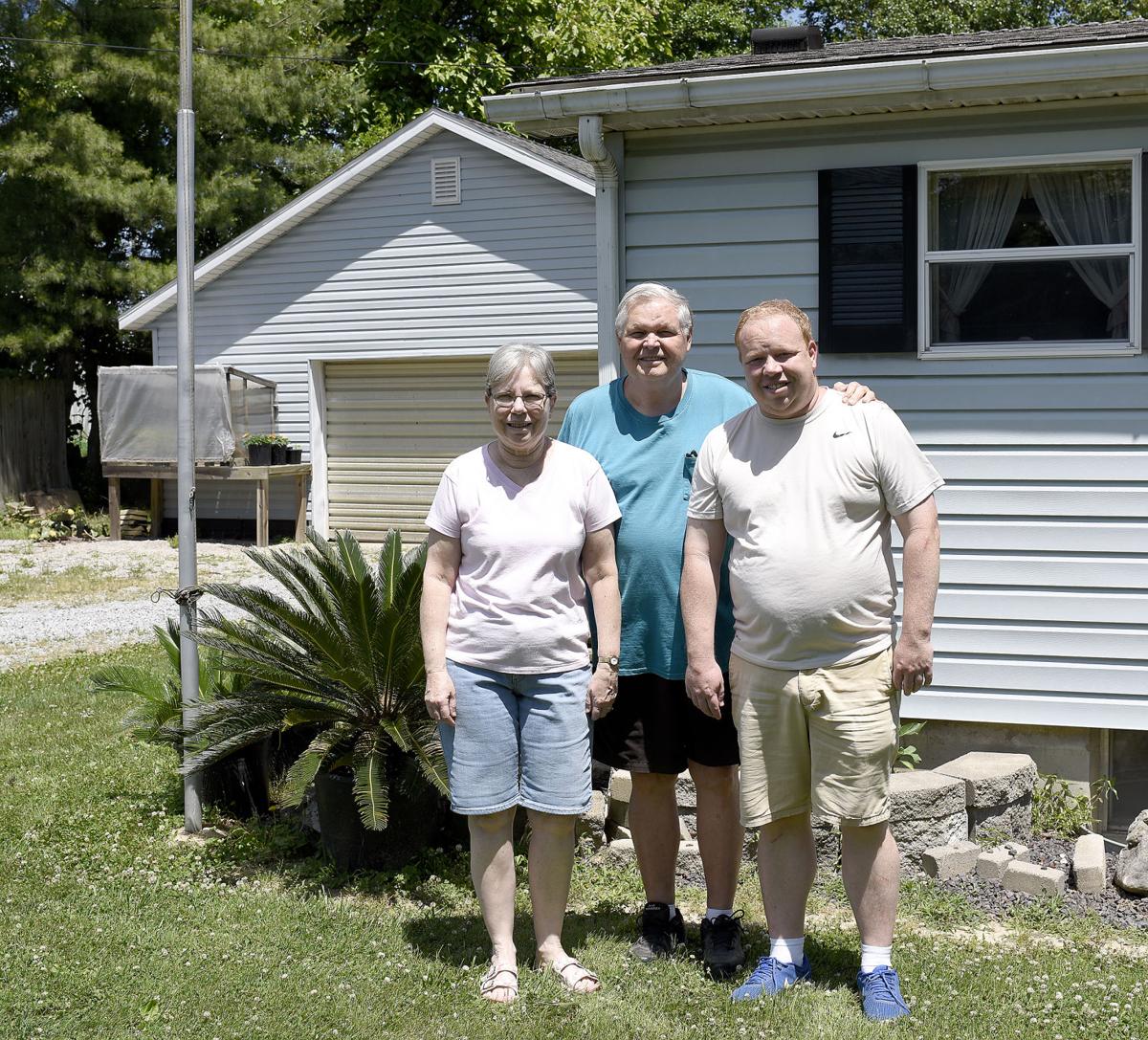 The Schmidt family today, 30 years after a tornado destroyed their mobile home in Newton. They are standing in front of the house that was built in its place. The garage in the background survived the tornado. From left are Karen and Rein Schmidt and son Eric. 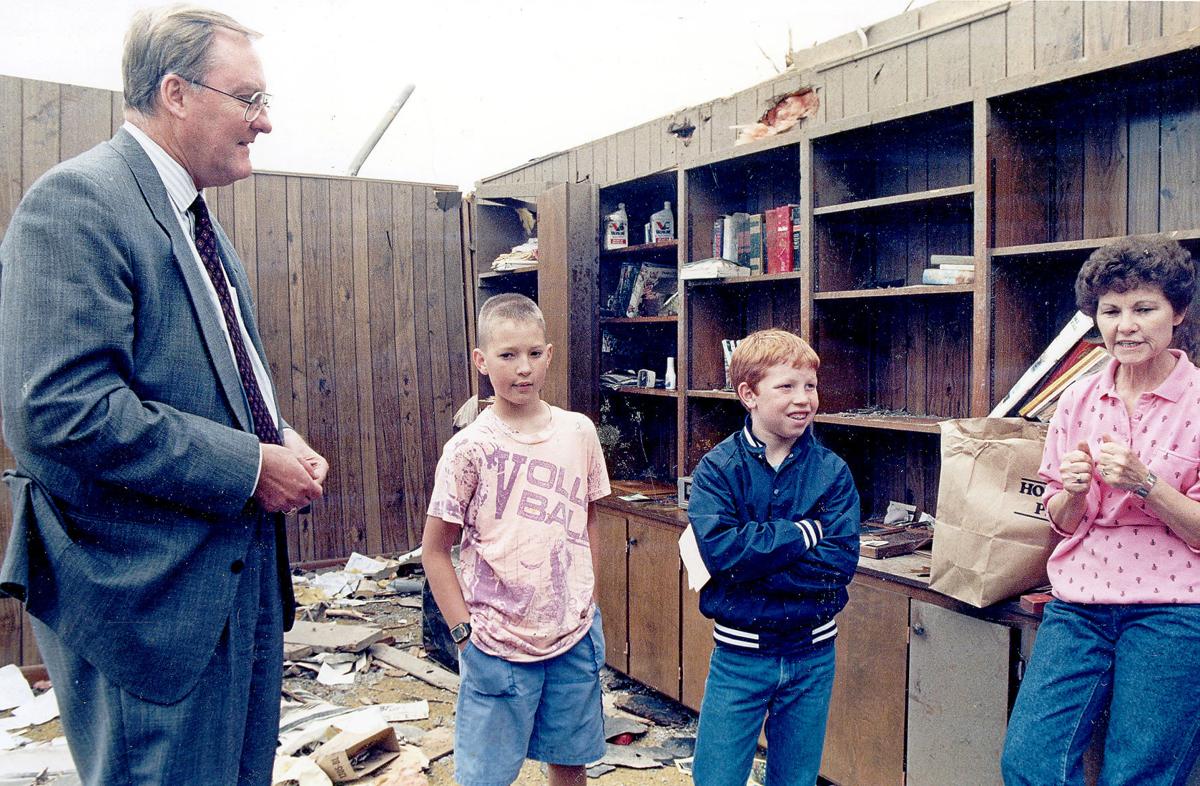 Former Illinois Gov. Jim Thompson, are left, visited Newton after a tornado destroyed portions of the community 30 years ago. Pictured from left with Thompson are Jake Fillinger, Eric Schmidt and Irene Reynolds. Thompson visited victims of the tornado in Newton a couple of days after it hit. 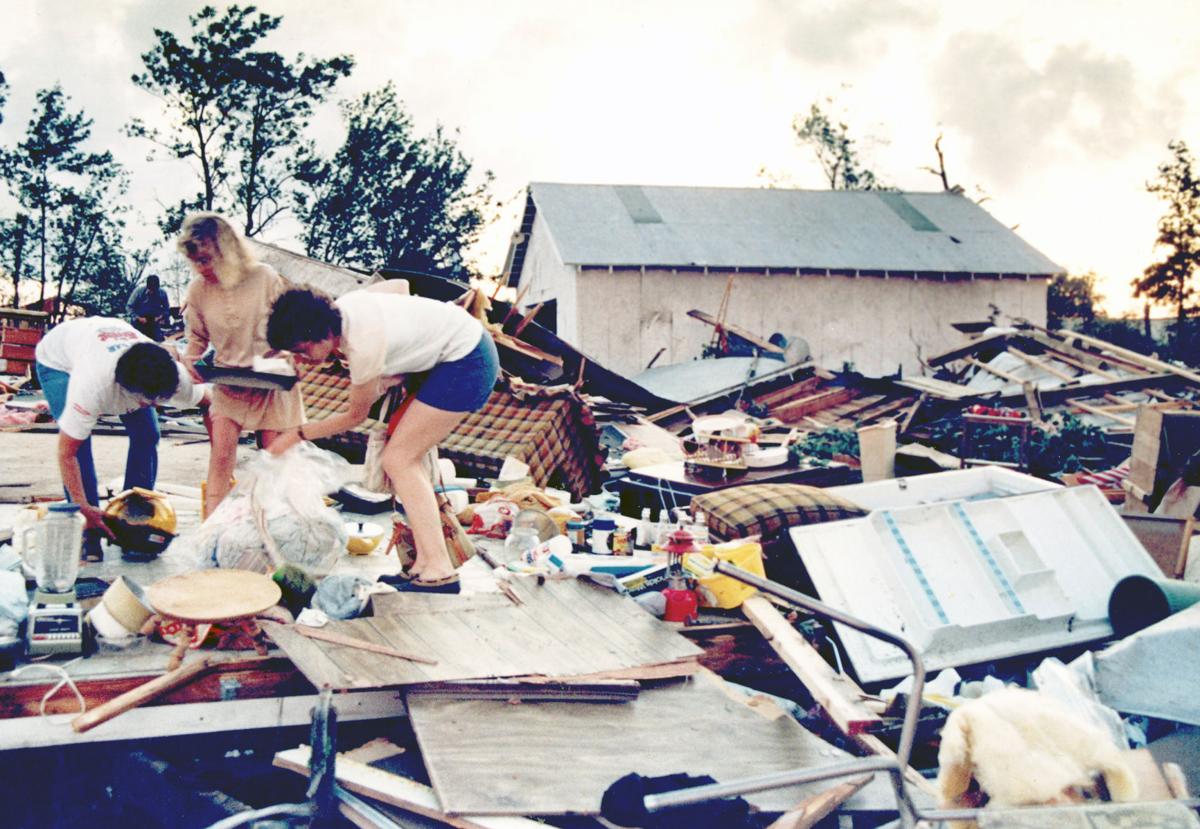 Karen Schmidt, right, sifts through her families belongings after their mobile home was hit by an EF4 tornado 30 years ago. In the background is a garage that remains standing today. 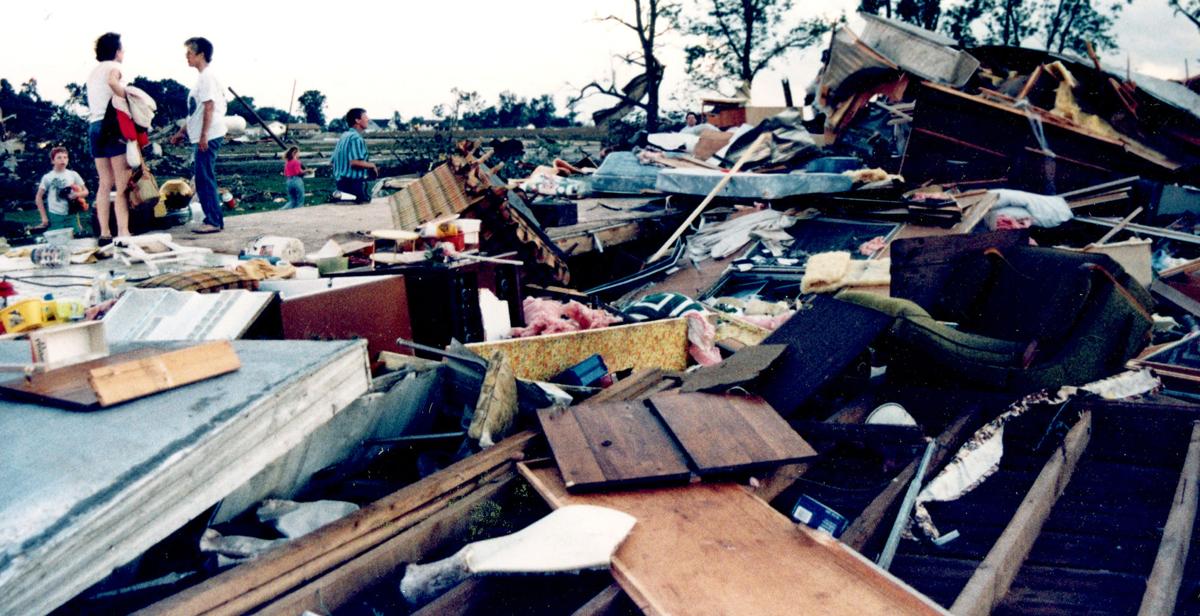 A photo shows the destruction of the Schmidt family’s mobile home in Newton following an EF4 tornado 30 year sago. From left are Eric Schmidt and Karen Schmidt (blue shorts). 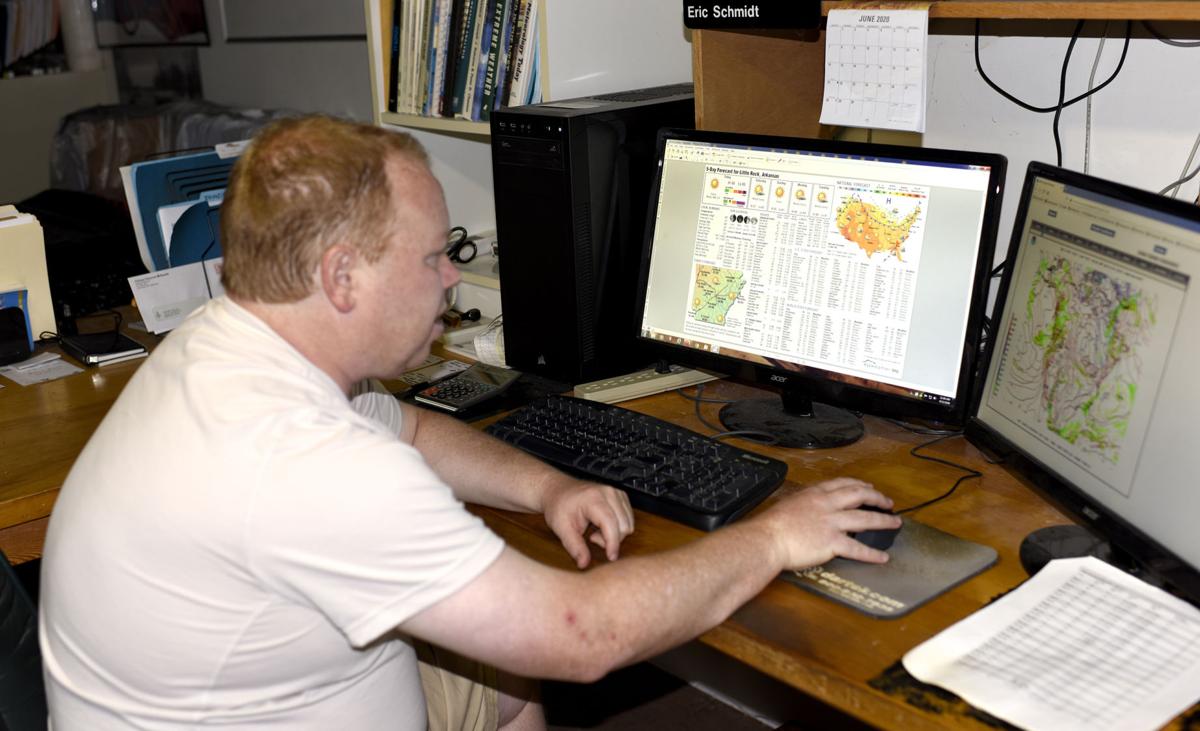 Eric Schmidt is finishing a weather page he prepares for a newspaper in Arkansas. His business, EJS Weather, provides weather data for several newspapers throughout the United States, agriculture, utilities and marine. 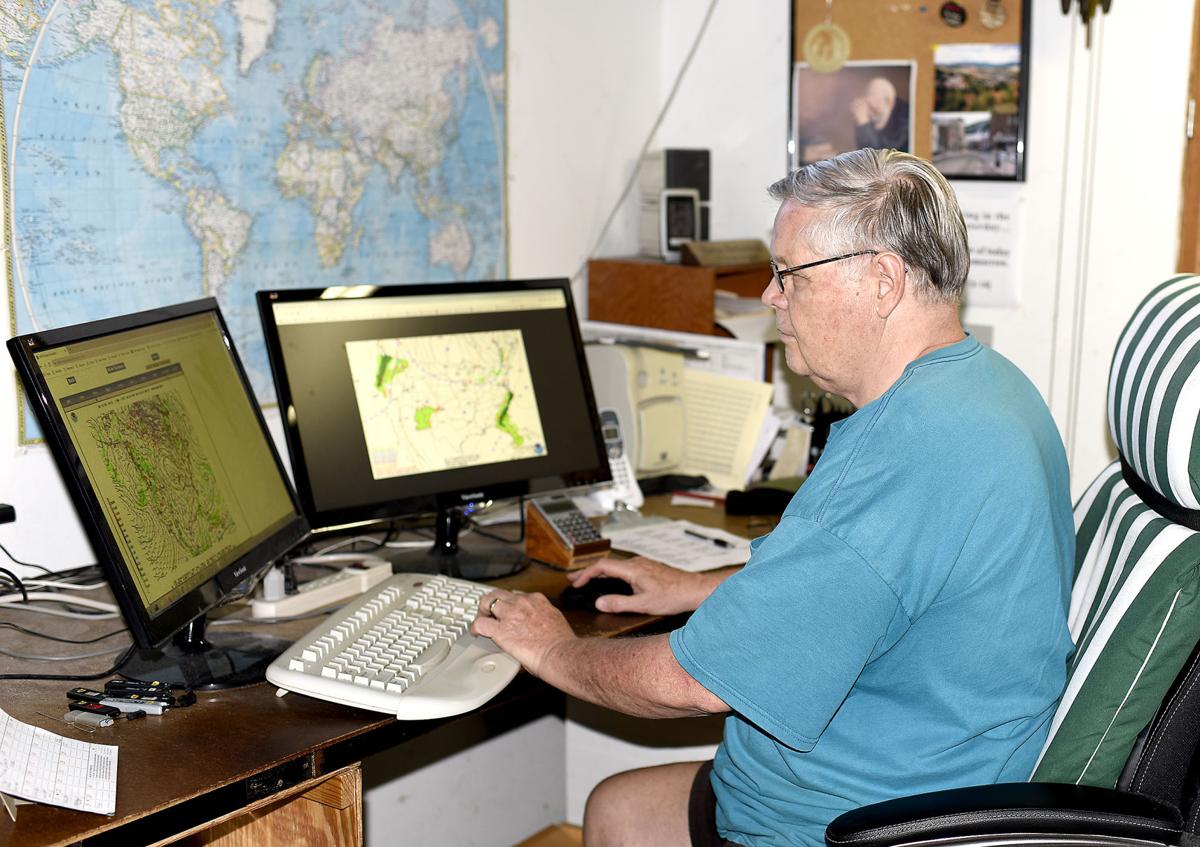 NEWTON — Rein and Karen Schmidt and their son, Eric, were in their mobile home in Newton on June 2, 1990, when the weather turned fierce just before 6 p.m.

The Schmidts quickly sought shelter at a neighbor’s house.

“The neighbors were already hunkered down and locked up in the basement and we couldn’t get in there,” Rein Schmidt said. “So we went to the hotel.”

On the way to the Ranch Motel, the Schmidts saw it.

“Before we got to the motel, you could see the tornado right down the street,” Rein said.

“There were three funnels all going into one,” said Eric, who was 11 at the time.

They found shelter at the motel owner’s house. Once inside, they took refuge in the bathroom.

“Me, my mom and the owner of the motel, Irene Reynolds, were in the bathtub, and my dad was on the floor with his feet against the door,” Eric said.

“At first, we didn’t hear anything. It was all calm,” Eric said. “Then you could hear it roar as it was coming closer.”

Eric recalled how pitch black everything turned when the tornado arrived.

“You couldn’t see the hands in front of your face, and the air pressure kept your ears popping,” he said.

By the time the twister had dissipated, the bathroom was the only room in the house with the roof still intact.

“The bathroom wasn’t touched. The mirror wasn’t broken and none of the windows were broken,” Eric said.

The Schmidts walked out of the house and saw that their mobile home was destroyed.

“The only thing left was the garage,” Rein said.

“If we would have been in the trailer when the tornado hit, we probably wouldn’t have made it,” Eric said.

Two people at the motel were injured when their car rolled over onto them and one other person at the motel also was injured, Rein said. Those were the most serious injuries, he added. No one was killed.

The EF4 tornado with winds close to 200 miles per hour cut an eight-mile path of destruction to homes and businesses between Newton and Hunt City.

A couple of days after the tornado hit, then-Gov. Jim Thompson arrived in Newton to inspect the damage. Eric Schmidt and Irene Reynolds met with Thompson to share their experience.

“The rest of the summer all you could hear were chain saws,” Eric said. “For the first couple of months after the tornado, there were people out here every day.”

He said people from other towns came to help clean up the mess.

Eric said most of his family’s belongings were in the area of the trailer, with the exception of a canoe that appeared several blocks northeast of where they lived.

“It took us weeks to clean it up,” Karen Schmidt said.

The family spent the next couple of months building a house — with a basement. They moved into it in August 1990.

“Everybody said they wanted a basement this time,” Rein said.

Thirty years later both Eric and Rein have a passion for weather. Rein’s passion actually predates the twister.

He was a weather observer for the National Weather Service in Evansville, Indiana, and a weather watcher for WCIA-TV, Channel 3, Champaign, providing data to weather anchor Judy Fraser when the tornado hit Newton.

“I told them (WCIA-TV) on the phone we were watching it coming, and they put it on the air.” Rein said.

Rein was also in contact with the sheriff’s department.

The tornado experience prompted Eric to be a meteorologist.

Eric received a Bachelor of Arts in Meteorology from Northern Illinois University. He worked in Houston and Chicago at the world headquarters of United Airlines as an aviation meteorologist before starting his own business and returning to Newton 13 years ago.

Today Schmidt is president of EJS Weather, which he runs from the basement of the house that was built following the tornado. One of services the business offers is customized weather data layouts for 10 newspapers in the United States. The business collects and evaluates weather data that is specific to the location of the newspaper.

Eric is a regular guest on RFD radio and provides information to a utility company magazine based in Tulsa, Oklahoma.

Rein joined Eric in the business when it started in 2007, and since weather never stops, has worked every day since.