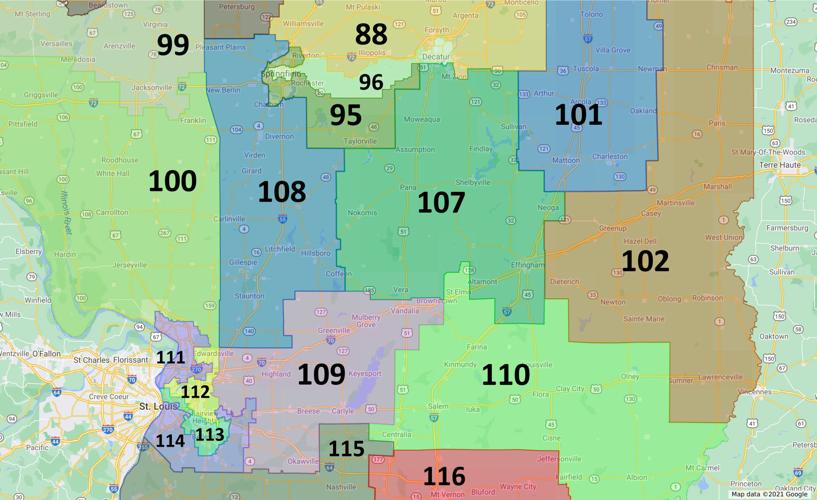 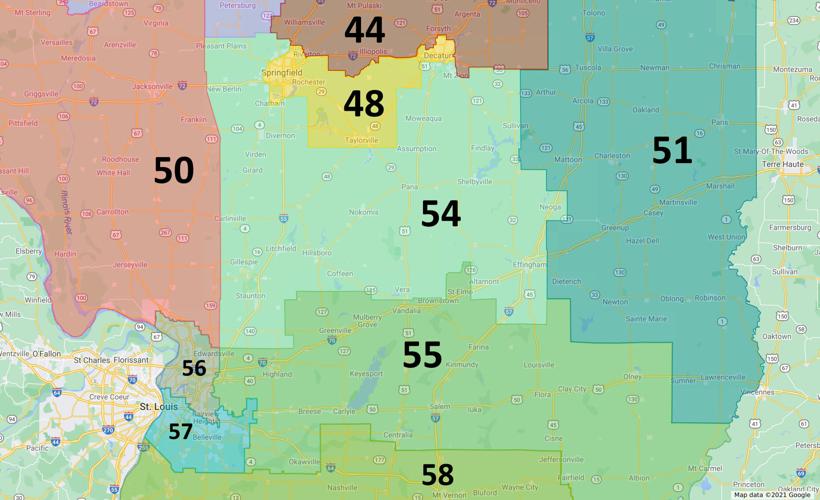 These maps are just drafts, though they have been approved by the Senate and House Redistricting Committees. They won’t be made official unless the full House and Senate vote to approve the maps and the approval is signed off by the governor.

With changes to nearly every district in the state, the Effingham region could be looking at mixing up who represents the area in Springfield.

The city of Effingham is currently in the 107th district, which includes Vandalia, Greenville and Salem. Under the new map, those areas would be part of the 109th and 110th, while the 107th would stretch north to include Shelbyville and some parts of southern Decatur.

This shift in the 107th means that at least two sitting representatives — Blaine Wilhour (R-Beecher City) and Brad Halbrook (R-Shelbyville) — would live in the same district.

In the first draft of the map, Adam Niemerg (R-Dieterich) was also in the 107th district, but was moved to the 102nd in this week’s revision.

This remapping could prove useful for some seeking office, since some districts don’t have any sitting representatives who live there. This includes the 110th, which covers Salem, Flora and Olney.

In the latest proposed map, the southwestern parts of Effingham county’s senate district would morph from its current form, which stretches southwest down to Edwardsville. Instead, it would go northwest all the way to the western suburban developments outside of Springfield.

Effingham would instead join the new 54th district, which runs north to Decatur and stretches northwest to include slivers of suburban developments in Springfield.

Freshman senator Steve McLure (R-Springfield) currently lives in the proposed senate district that includes Effingham. The city would no longer be in the same district as where its current senator, Jason Plummer (R-Edwardsville) lives.

Kent Redfield, emeritus professor of political science at University of Illinois Springfield, says that the maps proposed by the Democrat controlled House and Senate Redistricting committees were drawn to preserve Democrats’ power in the state.

“It’s strictly partisan advantage that’s driving this,” he said. “They would draw a map that essentially tries to preserve the status quo”

He pointed to some of the most extreme districts in the proposed maps, such as the 17th house district, which contains densely populated areas of Chicago’s South Side as well as rural Kankakee county.

Redfield cautions that while the maps are partisan, people shouldn’t expect Republicans to behave differently if the positions were swapped.

“Overall, it doesn’t matter — Democrat, Republican — when you give one party the authority to draw maps, the temptation is irresistible,” Redfield said. “The map that would be drawn by the Republicans, despite all their talk about fairness, would benefit the Republicans. There’s no question.”

Outside of the Effingham area, Redfield says the goal of the maps downstate appears to be to strengthen Democrats’ hold on the Metro East area and to connect population centers to form Democratic or competitive districts in central Illinois, such as the 96th House district, which connects Springfield and Decatur.

“In terms of what happens at the top: how do we squeeze a Democratic representative and a Democratic senator out of central Illinois?”

When asked about the differences between the first draft and the latest draft, Redfield said that outside of some specific concessions, the maps are largely similar.

Legislators also released a proposal for a new supreme court districts. Effingham would remain in the 5th district, though its northern border would move further north to include Champaign, Piatt and Vermillion county among others.

Republicans and advocacy groups have criticized the maps released so far for being partisan and for using data that didnt’ come from the decennial census.

“Good government groups and community advocates strongly reject the attempt by Illinois lawmakers to introduce and pass maps that are built on an undercount of Illinoisans across the state,” said a statement released by the nonprofit CHANGE Illinois and 26 other groups, including AARP Illinois, Illinois Chamber of Commerce and the Better Government Association.

The undercount is an expected error because the policymakers who drew the map used American Community Survey 5-Year Estimates from 2019 to estimate population size for these maps. CHANGE Illinois and its coalition estimate the undercount to be about 40,000 people.

Though the state constitution requires the redistricting process to happen the year after the 10-year census, it does not require the state to use data from the census to draw the maps. The only requirements for maps are that districts are compact, contiguous and substantially equal in population.

Local republicans also criticized the process by which the maps were drawn, which was controlled by Democratic lawmakers.

“The problem is not whether sitting senators are mapped into the same districts – because this isn’t about us,” said Plummer. “This is about taking sitting politicians like myself out of the process all together. The map in question was created by and for politicians behind closed doors with inaccurate data.”

“Legislators should not be drawing their districts. You the people should be drawing these maps,” said Niemerg at a May 25 press conference.

“This proposal does not pass the fairness or the transparency smell test,” said Niemerg in a press release the day before.

Others took the chance to criticize Democratic leadership for advocating for redistricting reform on the campaign trail.

“The people in Illinois are tired of politicians saying one thing when its popular for them to say it, but when it comes to crunch time, doing another,” said Wilhour at a May 25 press conference. “Governor Pritzker, Speaker Welch, they both said very very clearly over and over that politicians shouldn’t be drawing maps.”

When asked to respond to the latest maps, a spokesperson for Wilhour said the representative wouldn’t be commenting on the process until things are final. Niemerg could not be reached for further comment.