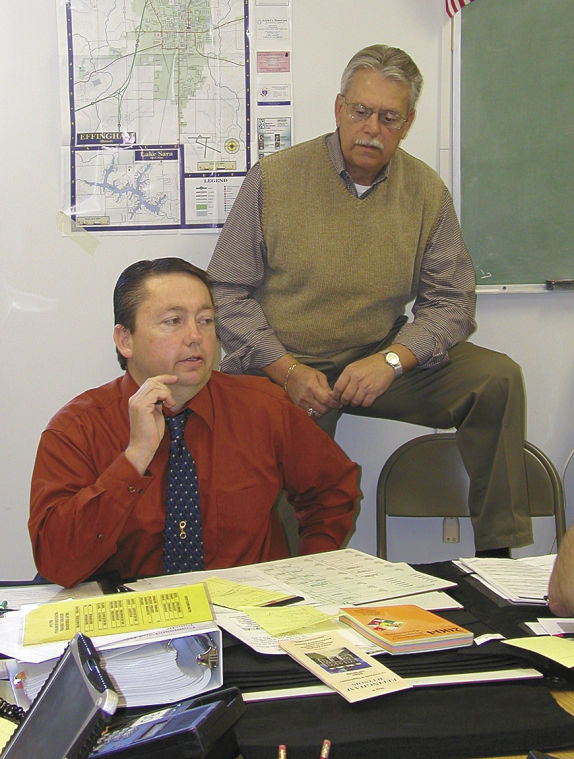 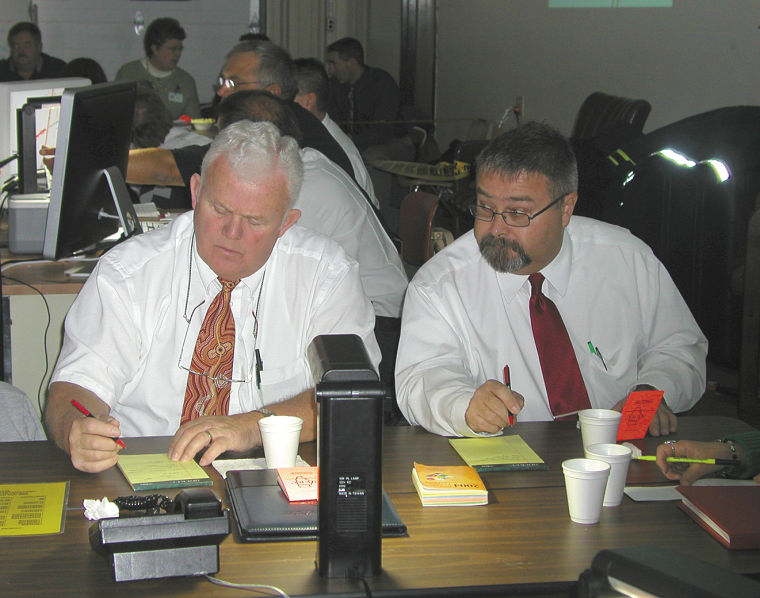 Imagine what might happen if 20,000 gallons of latex and 10,000 gallons of formaldehyde spilled from derailed rail cars — upwind from Effingham High School on a day with a 100 percent chance of rain. More than 80 public safety and emergency service professionals, elected officials and school administrators did just that Thursday. Participants in a tabletop exercise sponsored by CSX Railroad and hosted by the Effingham County Emergency Management Agency were asked what they would do if such a derailment occurred. Bill Caton, hazardous materials manager for CSX, said the exercise was developed to help local officials manage situations in which hazardous materials are involved. “This gives us planning experience and affords everybody the opportunity to work with each other,” Caton said, adding Thursday’s exercise could be adapted to help local folk deal with any type of potential disaster. The scenario was based on the CSX tracks along U.S. 40 near where the highway passes underneath Interstate 57/70. After a loud crash and possible explosion, it was determined 12 cars on an eastbound freight train derailed on a day with winds out of the west at 1 to 3 miles per hour, 40-degree temperatures and a 100 percent chance of rain. Effingham County Sheriff John Monnet, who served as public information officer during the exercise, said the potential for rain was the scariest part of the scenario. “The thing you don’t want to mix with latex is water,” Monnet said. “The mixture can cause toxic vapors.” Monnet said one other car spilled a “white powder” later determined to be harmless, while the other derailed cars were either empty or undamaged. The sheriff said the scenario also called for two people to be injured with breathing problems that were not life-threatening. In the scenario, officials ordered an evacuation of all public and parochial schools in the city of Effingham, as well as St. Anthony’s Memorial Hospital. A command post was set up in the front room of the EMA building. That group was led by incident commander Todd Ebbert, an Effingham police detective, and also included a number of elected officials. Ebbert was receiving information from a large operations group set up in the back room of the building. That operations detail was, in turn, receiving information from police, firefighters and emergency personnel at the “scene.” The exercise also included planning and logistics detail as well as a trio of Effingham firefighters providing information on hazardous materials, as needed. Safety is the top priority in any disaster situation, said Bill Ferroli, owner and president of Compliance Associates Inc. of Cape Coral, Fla. But Ferroli added management ability is also key to successfully managing disasters. “The incident commander and operations chief need to follow the three D’s — decide, delegate and disappear,” Ferroli said. “That’s not to say they should leave the area, but they do need to allow their staffs space to produce what is needed to manage the situation. Incident command does not work well with micro-managers.” Effingham Mayor John Lange, the city’s former police chief, said he understands his role as an elected official. “I would need to make sure the incident commander has everything he needs to take care of the situation,” Lange said, adding it would be his decision to declare an official disaster and seek state aid to mitigate the situation. Mike McCollum, Effingham High School principal, did not participate in the actual exercise, but he stopped by the EMA building to observe because of the railroad’s proximity to his school. “The key is (to know) when to evacuate and when not to,” McCollum said. County EMA director Russ Thomas said the exercise allowed people to work together who might not normally do so. “The pulling together is important because not everybody is filling traditional roles,” he said. “We’re getting an idea of what it would take to handle this type of situation if it really happened.” Bill Grimes can be reached at 217-347-7151 ext. 132 or bill.grimes@effinghamdailynews.com.

Judy Louise (Morris) Baker, 76, of Windsor, IL, passed away Tuesday, January 18, 2022, at SBLHC, Mattoon. Memorials are suggested in lieu of flowers to JDRF.org (for Juvenile Diabetes) A Celebration of Judy's Life will be held at 3:00pm Monday January 24, 2022, in the Swengel - O'Dell Funera…