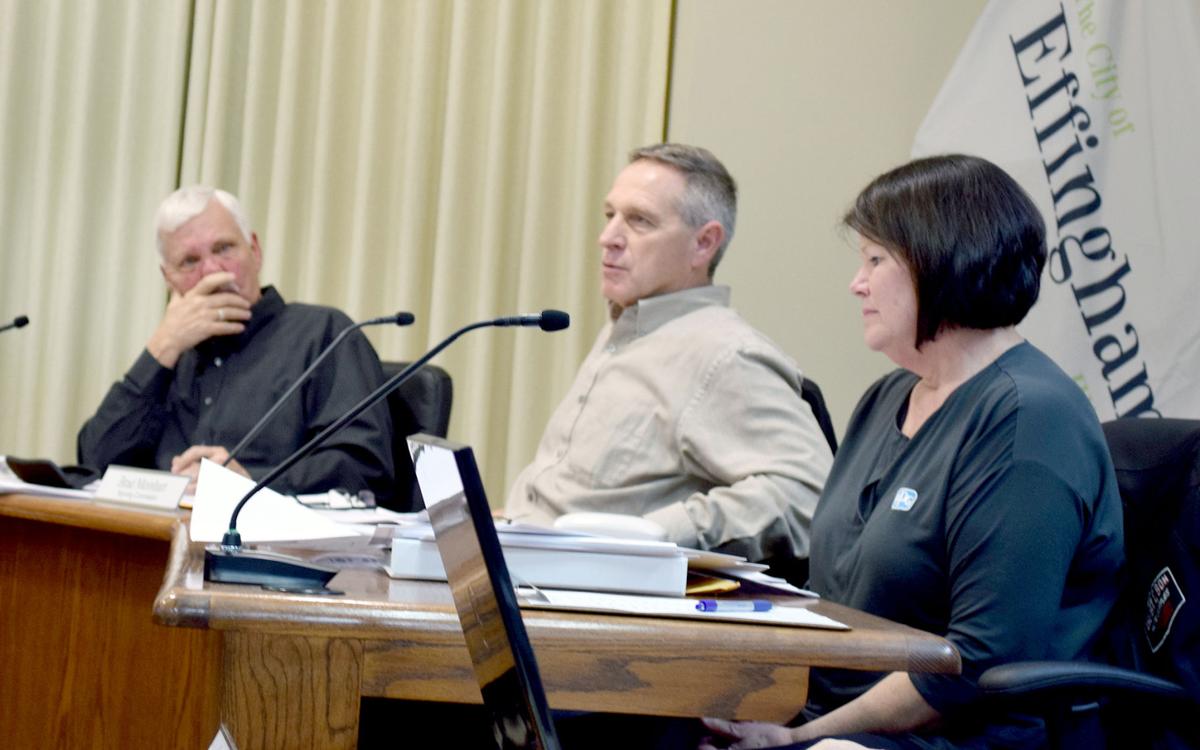 Three members of the Effingham Plan Commission are shown, from left, Alan Harris, Brad Meinhart and Cindy Vogel. The commissioners voted 4-2 to recommend to the City Council approval for a special-use permit for adult-use recreational cannabis sales near the existing medical cannabis shop in Effingham. 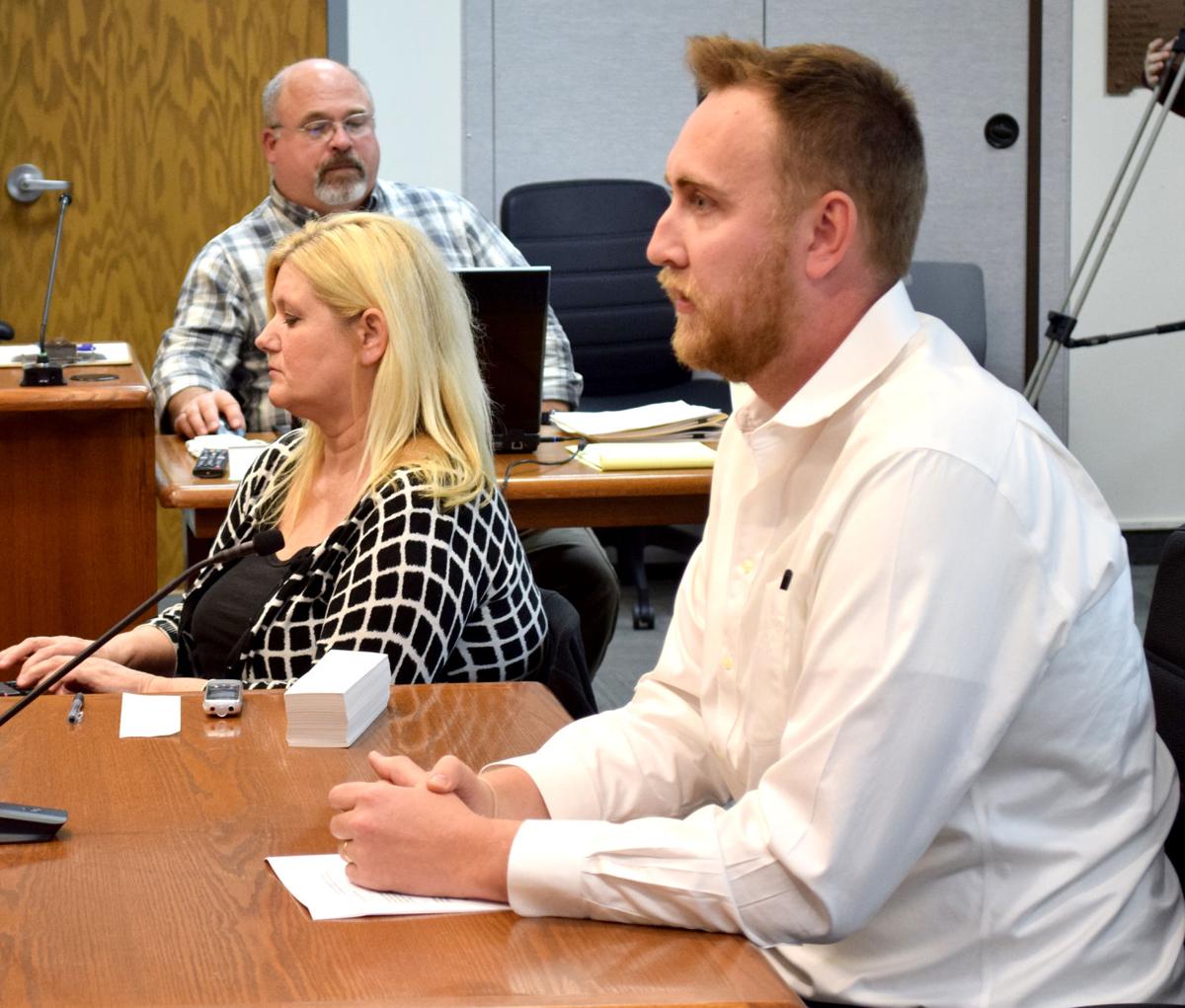 Brendan Blume of Green Thumb Industries spoke at the Effingham Plan Commission about the company’s desire to start selling adult recreational cannabis adjacent to where it sells medical cannabis. 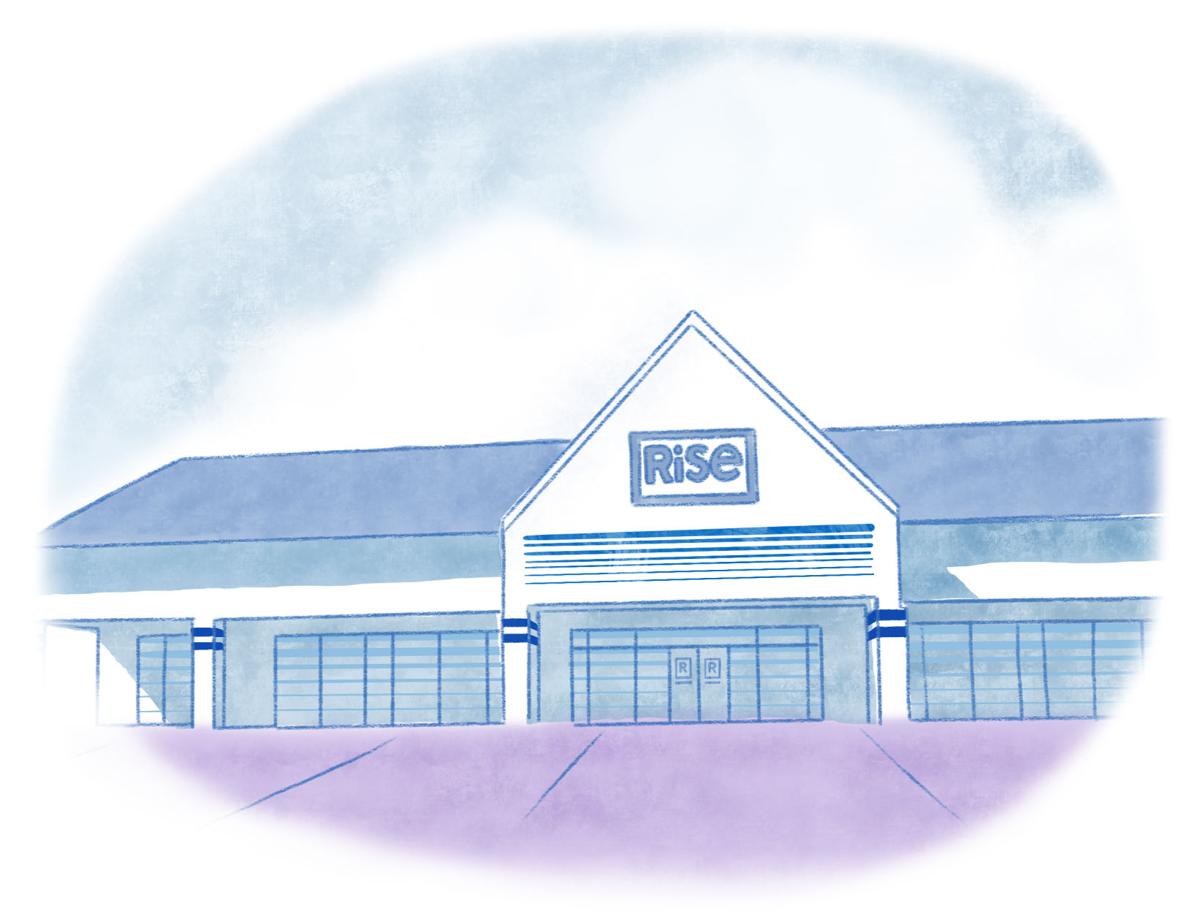 An artist’s rendering shows the new branding of The Clinic Effingham, soon to be renamed Rise Effingham.

Three members of the Effingham Plan Commission are shown, from left, Alan Harris, Brad Meinhart and Cindy Vogel. The commissioners voted 4-2 to recommend to the City Council approval for a special-use permit for adult-use recreational cannabis sales near the existing medical cannabis shop in Effingham.

Brendan Blume of Green Thumb Industries spoke at the Effingham Plan Commission about the company’s desire to start selling adult recreational cannabis adjacent to where it sells medical cannabis.

An artist’s rendering shows the new branding of The Clinic Effingham, soon to be renamed Rise Effingham.

EFFINGHAM — The Effingham Plan Commission has set rules and approved a possible location for dispensing adult-use recreational cannabis, but the Effingham City Council will have the final say next week.

With construction already underway in the suite next to the medical marijuana dispensary The Clinic Effingham, 1011 Ford Avenue, the Plan Commission voted Tuesday to recommend approval of the permit to Effingham City Council, which meets at 5 p.m. Tuesday, Jan. 21, at city hall.

Meinhart, after hearing information and testimony on both sides of the topic, asked if the proposed location for this type of business was the best for Effingham?

“As people come through on the interstates, this is one of the first properties, coming from the east, that people see,” said Meinhart. “Is this the right location? It might be best for the business, but is it the best for our community?”

Vogel said she had concerns about a new residential subdivision close by and a church not far away from the proposed recreational-use dispensary. She wasn’t certain either if the proposed location is best for Effingham.

“I don’t know if we will have lines wrapped around the building and down the street,” said Vogel. “I don’t know what to expect. But, it’s here. And it’s all about the money. Let’s be honest.”

Hayes said he drives along the interstate, although he’s aware of it, the medical cannabis shop isn’t the first thing that draws his attention.

Thies questioned where an ideal location would be.

Brendan Blume, vice president of store development with Green Thumb Industries, which owns The Clinic, stated Tuesday the company would like to be allowed to add to the already successful medical cannabis dispensary at the same location by selling recreational cannabis in the next-door building of the complex.

If the City Council approves it next week, Kelley Esker, GTI Community Outreach Director, said the business hopes to be ready for sales in February on the recreational side.

She believes the addition to the business means GTI will be hiring an additional 15 part-time employees for the Effingham dispensary.

Also, GTI expects to change the name of the dispensary to Rise Effingham upon opening of the new location in its rebranding efforts across Illinois. GTI also has locations in Mundelein, Canton, Quincy and Joliet.

Blume said some of the benefits for the community would be the draw of people from other communities who would patronize other shops and restaurants while in Effingham.

“We have great dispensaries throughout the State of Illinois and we’ve seen the positive benefits from the local businesses adjacent to ours,” said Blume.

A local pastor spoke in opposition during the public hearing portion of the meeting requesting the special-use permit. The Rev. Bryan Newswander, pastor of Effingham Assembly, told the commission just because the sale has been allowed here, doesn’t mean the commission has to grant a permit to do so.

“As a local pastor, I am concerned about the good of our community,” said Newswander. “One of our great ministries is called Celebrate Recovery, which is a Christ-centered 12-step recovery program for anyone struggling with hurt, pain and addiction of any kind.”

“So, is this good for our community?” Newswander asked.

“As a resident, as a citizen, and as a pastor, I’m concerned,” he added. “I’m concerned because this is ‘the great experiment’ right now. This is still new. We know that it takes time for reports and studies to come through. I think it is a bad experiment. I’m asking you to consider what good comes from giving a special permit for the sales of recreational marijuana?”

City Attorney Tracy Willenborg said special conditions can be placed on a special-use permit to ensure safety of the community.

Greg Koester, subdivision administrator, said the state legislature allows municipalities to set their own guidelines, rules and regulations through zoning, so the text amendment was drafted by city staff following many discussions. The text amendment was unanimously approved Tuesday.

“Any petition for a special-use permit under this (text amendment) will be considered on a case-by-case basis, after being evaluated on the entirety of the circumstances affecting the subject property,” said Koester, referencing the Municipal Code.

The business must provide an approved site plan and pay $5,000 for an administrative review fee as well.

The city has allowed a maximum of two special-use permits for an adult-use cannabis dispensary in a highway commercial district; and the dispensary cannot be located within 1,500 feet from another adult-use dispensary.

The six pages of rules and regulations include:

In other matters, the Plan Commission:

Sorry, there are no recent results for popular images.