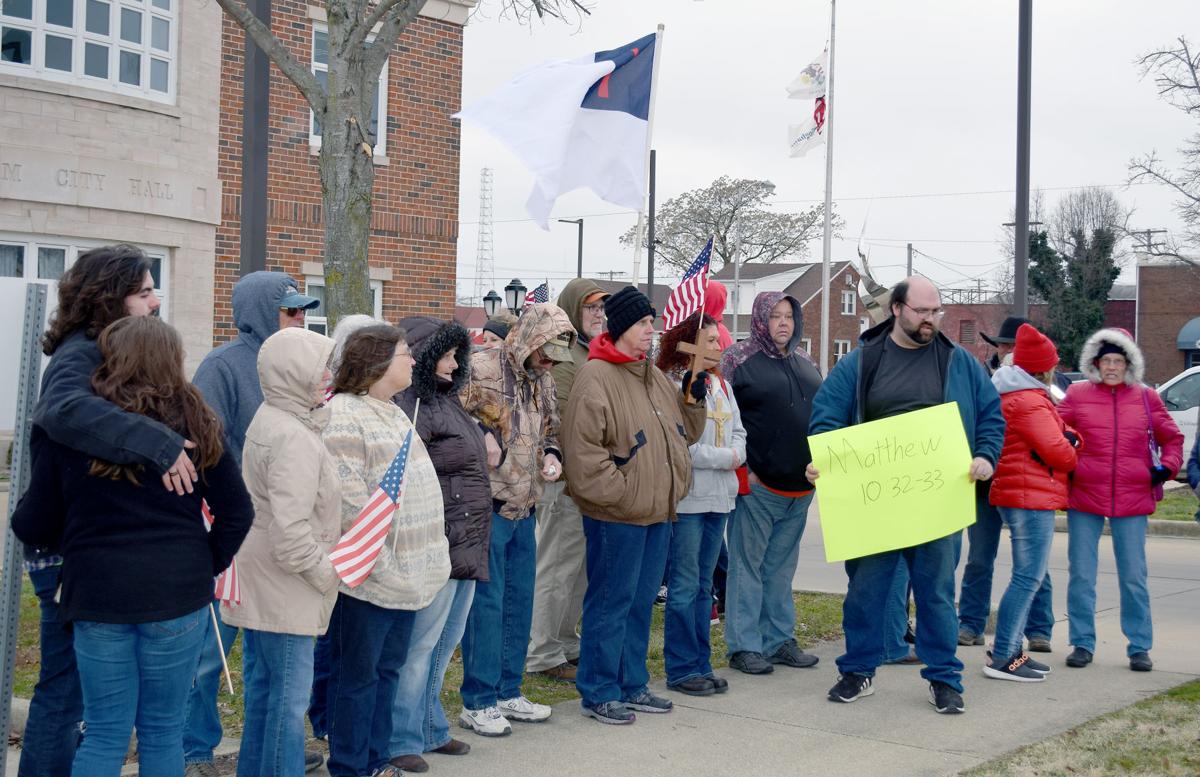 Demonstrators gather with signs, crosses and American and Christian flags in front of Effingham City Hall. 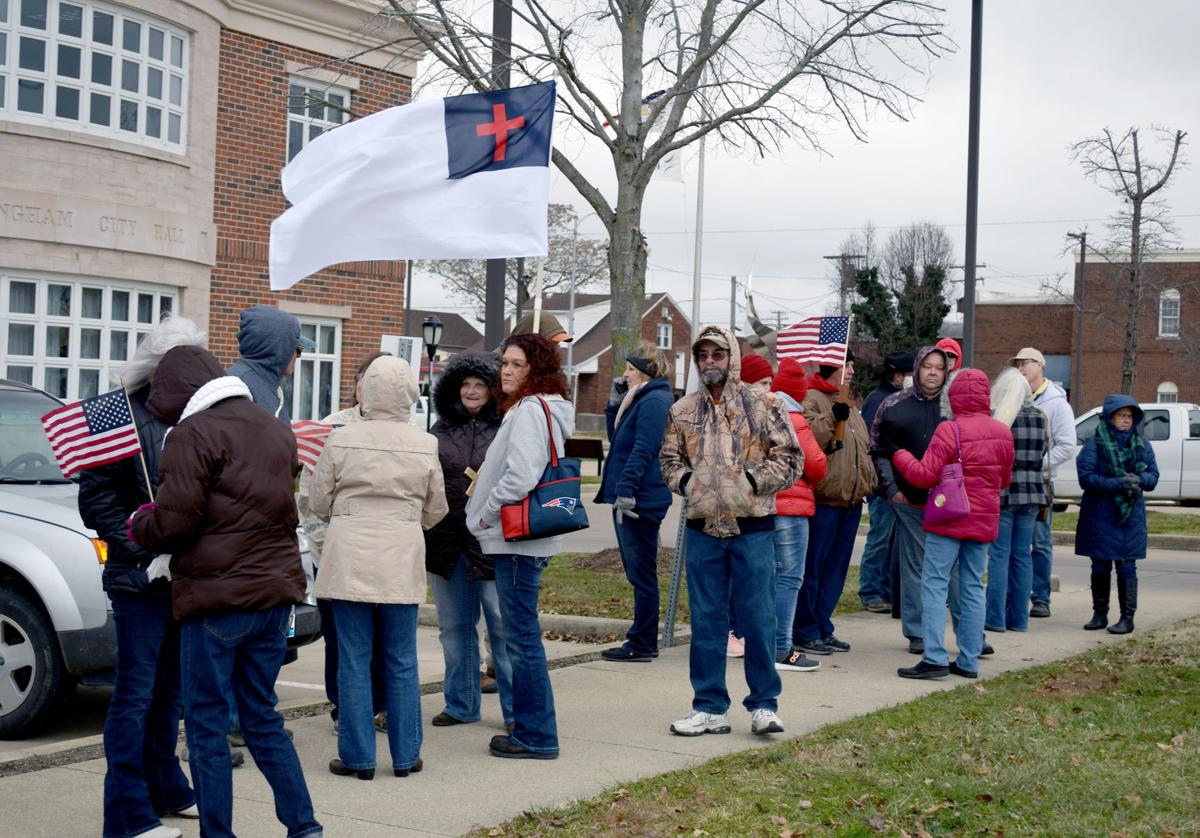 Demonstrators gather for the Standing Up For Jesus demonstration in front of Effingham City Hall Saturday afternoon. 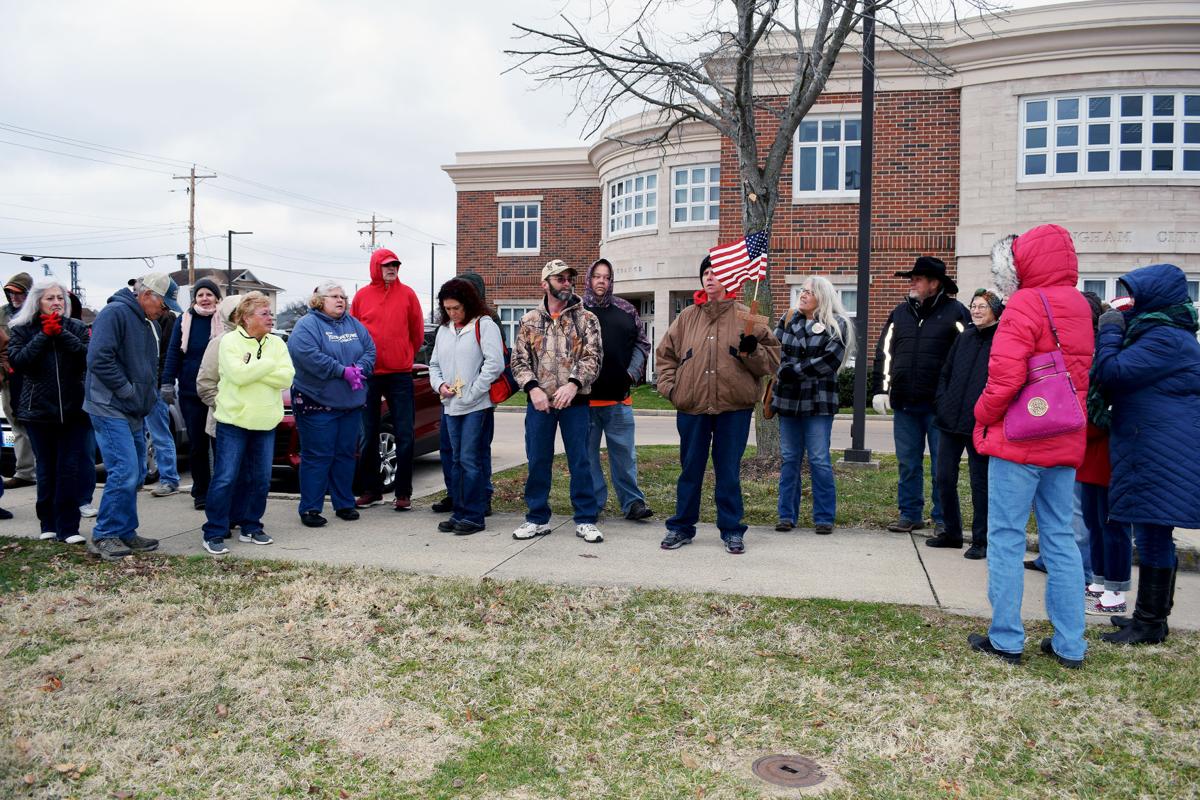 Demonstrators stand in front of Effingham City Hall during the Stand Up For Jesus demonstration Saturday afternoon.

Demonstrators gather with signs, crosses and American and Christian flags in front of Effingham City Hall.

Demonstrators gather for the Standing Up For Jesus demonstration in front of Effingham City Hall Saturday afternoon.

Demonstrators stand in front of Effingham City Hall during the Stand Up For Jesus demonstration Saturday afternoon.

EFFINGHAM — Demonstrators carried crosses, American flags and Christian flags as they walked in front of Effingham City Hall Saturday to support keeping a cross in a mural painted on public property that one group says needs to be removed.

The Edgewood, IL Flag Fliers hosted the Standing Up for Jesus demonstration following an outcry from the community that has spurred on online petition with nearly 20,000 signatures to let the cross remain.

The issue started when Wisconsin-based Freedom From Religion Foundation sent a letter Dec. 18 to Mayor Mike Schutzbach, saying that a resident of this area had contacted the group about the mural on the Raney Street overpass, near the Effingham High School football field. It’s located along the path between EHS campus and the school’s sports complex, which is on city property.

The landscape painting shows an American flag and white Latin cross with light emanating from it. The cross resembles The Cross at the Crossroads, which has loomed over Effingham along the interstate since 2001 and is supported by a faith-based organization that represents many different denominations.

Ben Rounds, 28, of Edgewood is a self-employed DJ/photographer who organized the demonstration. Rounds volunteered his DJ services to the Effingham High School Football Moms to help raise money for the mural.

“When I discovered the post of a group from another state that wanted the cross taken down, it upset me as a Christian that has been saved since the age of 13,” he said.

Rounds held a neon yellow sign with a Bible reference to Matthew 10: 32-33.

“Overall, it all comes down to what God wants us to preach as Christians to encourage as disciples of Christ and to show people the right way,” he said.

Cheryl Bloemker, 75, of Effingham, said the cross on the mural represents her faith and belief in Jesus.

“If you don’t stand up for it, they will want to take the big cross down,” she said.

Zaden Hampton, 17, of Louisville, also wants to keep the cross in the mural because of what he says it represents.

“It means that this city still has faith in Jesus and God,” he said.

Aaron Stortzum, 42, of Teutopolis, said he decided to attend the demonstration to stand up for his beliefs and those of his neighbors. He views the cross in the mural as a symbol of his faith.

“I’m not familiar with the complaint made about the cross in the mural but I think the removal of the cross is silly,” he said. “This country was founded on religious tolerance and freedom.”

Emily Fritcher, 35, of Altamont, was holding a Christian flag for the duration of the demonstration. She said she was there as a believer and believes hate is wrong.

“We have any right to display any symbol,” she said.

Dale Spindler, 59, of Watson, believes the cross is a landmark for the community.

“The cross on the mural is not forcing religion on anyone,” he said. “It’s part of our community.”

Amy Hibdon, 52, of Effingham, supports the cross and what it stands for: hope, freedom and faith.

“I don’t think one person should dictate the values of a city,” she said. “Walking through the tunnel is like this is our town, community and cross, and we are proud of it.”

Debbie Moschenrose, 57, of Effingham, brought a wooden triple cross that hangs in her home. Moschenrose said she wants to pray for the person who filed the complaint about the cross.

“I feel sad that they focused on one thing on that mural,” she said. “For some people, that might be all of Christ that they see, it’s not hurting anything.”

Debbie Hampton, 69, of Louisville, believes it’s time to stand up.

“I thought it was beautiful. Why does anyone want to take it away?” she asked. “I don’t understand how people can be against it and want to change it.”