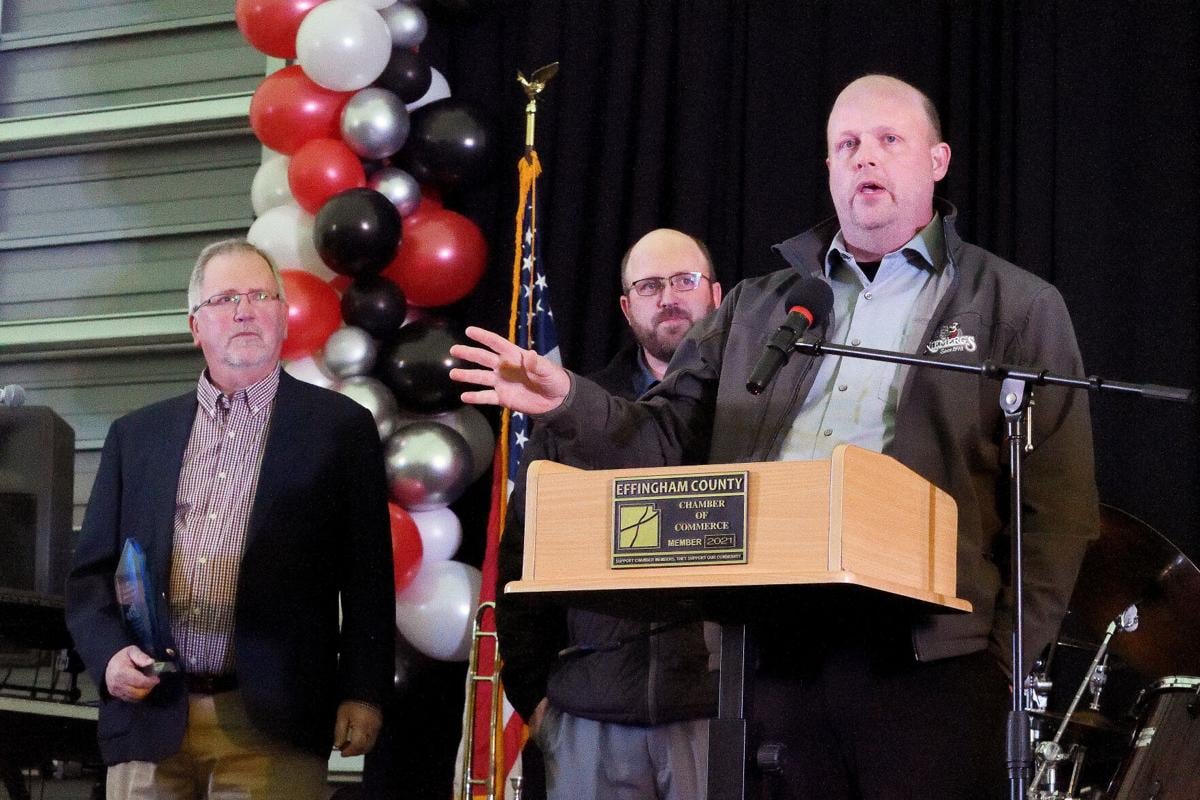 Niemerg's Steakhouse co-owner Jason Sandschafer speaks to the crowd after the family's restaurant was honored with the Effingham Chamber of Commerce's 2021 Excellence in Business award during the Effingham County Chamber of Commerce's Business Recognition Gala at Mid America Motorworks Saturday evening. With him is his brother and co-owner, Lucas, and father Dennis, the founder of Niemerg's Steakhouse. 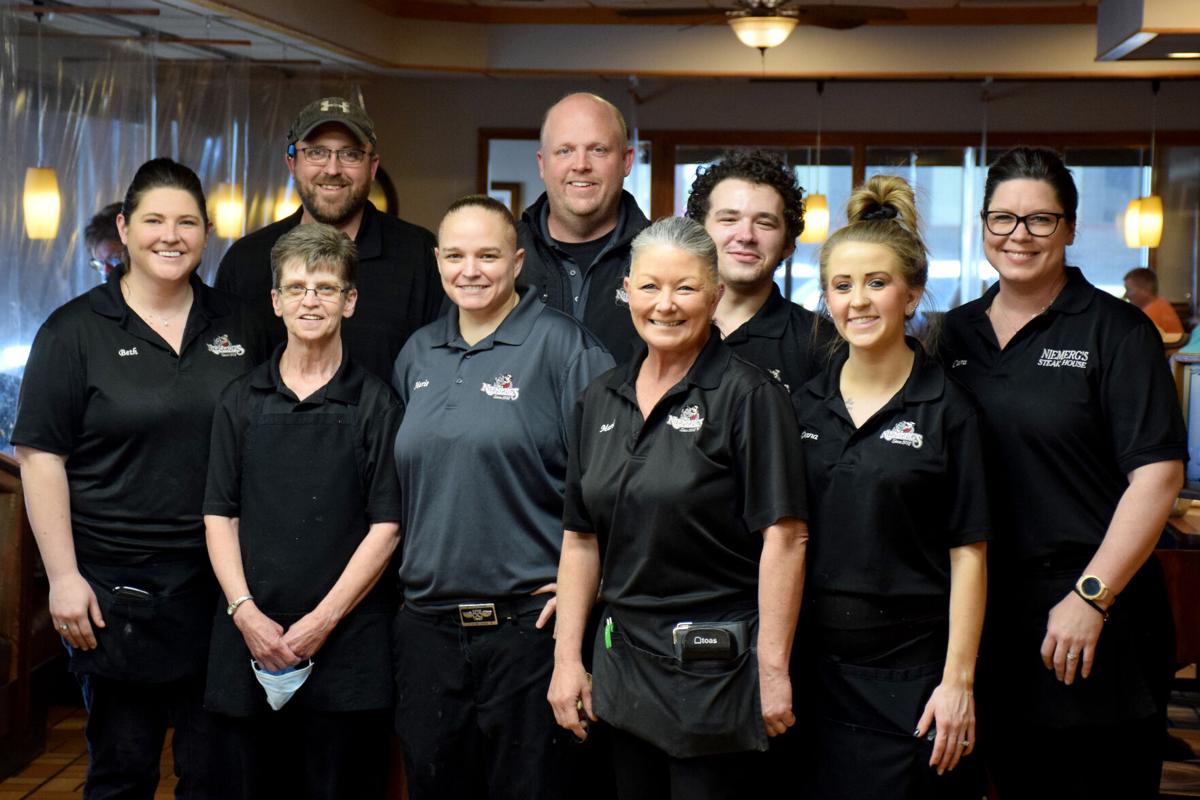 Jason and Lucas Sandschafer, back row, pose with their staff at Niemerg’s Steakhouse.

Niemerg's Steakhouse co-owner Jason Sandschafer speaks to the crowd after the family's restaurant was honored with the Effingham Chamber of Commerce's 2021 Excellence in Business award during the Effingham County Chamber of Commerce's Business Recognition Gala at Mid America Motorworks Saturday evening. With him is his brother and co-owner, Lucas, and father Dennis, the founder of Niemerg's Steakhouse.

Jason and Lucas Sandschafer, back row, pose with their staff at Niemerg’s Steakhouse.

Restaurants were hit hard by the pandemic this past year.

At Niemerg’s Steakhouse, navigating between keeping staff and customers safe and staying in business proved a challenge management and owners were willing to meet. Their unique approach earned them the Effingham County Chamber of Commerce Excellence in Business Award this year.

“The name Niemerg’s Steakhouse is recognized nationally,” said Chamber President and CEO Norma Lansing as she announced the award’s winners. “They opened a temporary drive-thru and even stocked grocery items for their customers.”

That drive-thru became permanent, marking just one of the things Niemerg’s management team is proud of this year.

“I just want to say thank you to all of you for the support and for taking care of us,” said General Manager Jason Sandschafer when he accepted the award. Joining him were Dennis, the restaurant’s founder, and Lucas Sandschafer, a co-owner.

Jason Sandschafer said he and his team got through the heights of the pandemic by staying flexible and keeping a focus serving the community of Effingham and the community of his 160 employees.

“It’s been a roller coaster, lots of ups and downs,” he said. “There was a lot of shooting from the hip.”

When the restaurant was shut down, the owners took the opportunity to upgrade the building, investing what they could into the infrastructure of the restaurant. This included refinishing all of the tables, doing heavy maintenance on the chairs throughout the restaurant and giving the whole building some fresh coats of paint inside and outside.

Jason Sandschafer said a lot of the work was made easier thanks to the contributions of Brian Sandschafer, a manager with the restaurant who helped organize these improvements.

Part of this was to take advantage of the opportunity. It’s not often a restaurant like Niemerg’s can shut down its dining room for upgrades without cutting into the customer experience and bottom line. But part of it was also to give the staff something to do.

For Sandschafer, it was important to not let anyone go during the pandemic. Though he had a few people leave, he didn’t have to fire or lay off any of his employees.

“We have people grow up with us,” he said, pointing to a server who started when he was in high school before listing a few people who have been with Niemerg’s for more than 40 years.

“The help helped us,” he joked.

Part of the work they did during lockdown was to start selling groceries and to open up a temporary drive-thru so customers could still come, without exposing themselves to COVID.

“We went to a temporary grocery store and we stocked the necessities,” he said.

They offered staple products like flour, meat and paper products. Sandschafer said he had a few customers come every week and tell him they were happy to get products there to keep the restaurant afloat.

Using the dining rooms as stock rooms, they shut down the grocery store once the restaurant was ready to open back up.

The drive-thru, however, stuck around. After a small remodel to add a permanent drive-thru window, it’s now a main feature of the restaurant. Though it seems unorthodox for a steakhouse to have a drive-thru, Sandschafer says he had been considering it almost five years.

“It had been an idea that was floated out there,” he said. “I let it go, but COVID brought it to the front of the list.”

The drive-thru helped not only add a new way for customers to get a meal, but also how the kitchen staff operates.

“The biggest benefit for us was how we were able to become more efficient,” Sandschafer said.

When they remodeled, they were able to introduce a whole new workflow, allowing the people taking orders to stay near the counter and assemble an order without having to cross the restaurant multiple times, as they had to before the remodel.

Though Niemerg’s was slightly controversial in how it handled the pandemic, opening up its dining room before the state’s mitigation plan allowed it to, they were able to do what many businesses weren’t: stay open, make customers happy and keep its staff on the payroll. That led to the restaurant being almost back to normal.

“Business is back,” Sandschafer said.