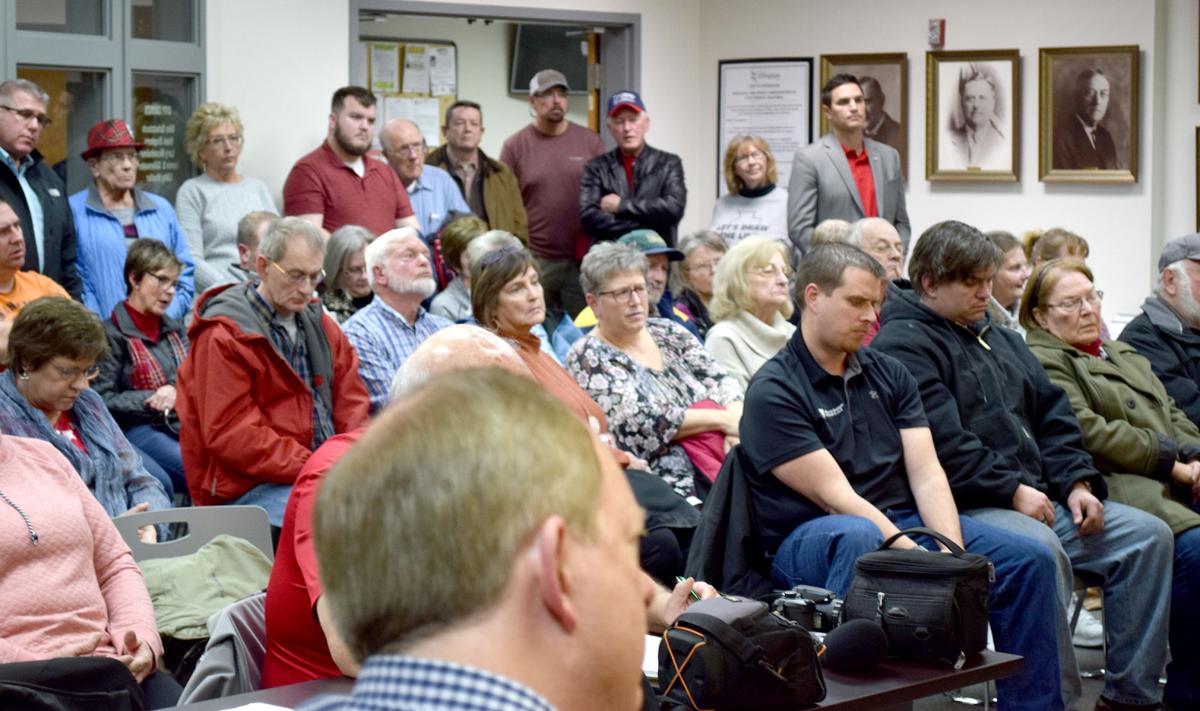 It was standing room only at City Hall, where many people came to hear comments and speak on the topic of the mural painted at Raney Street overpass near Effingham High School. An estimated 80 people were in attendance for the council meeting Tuesday, many for this single topic. 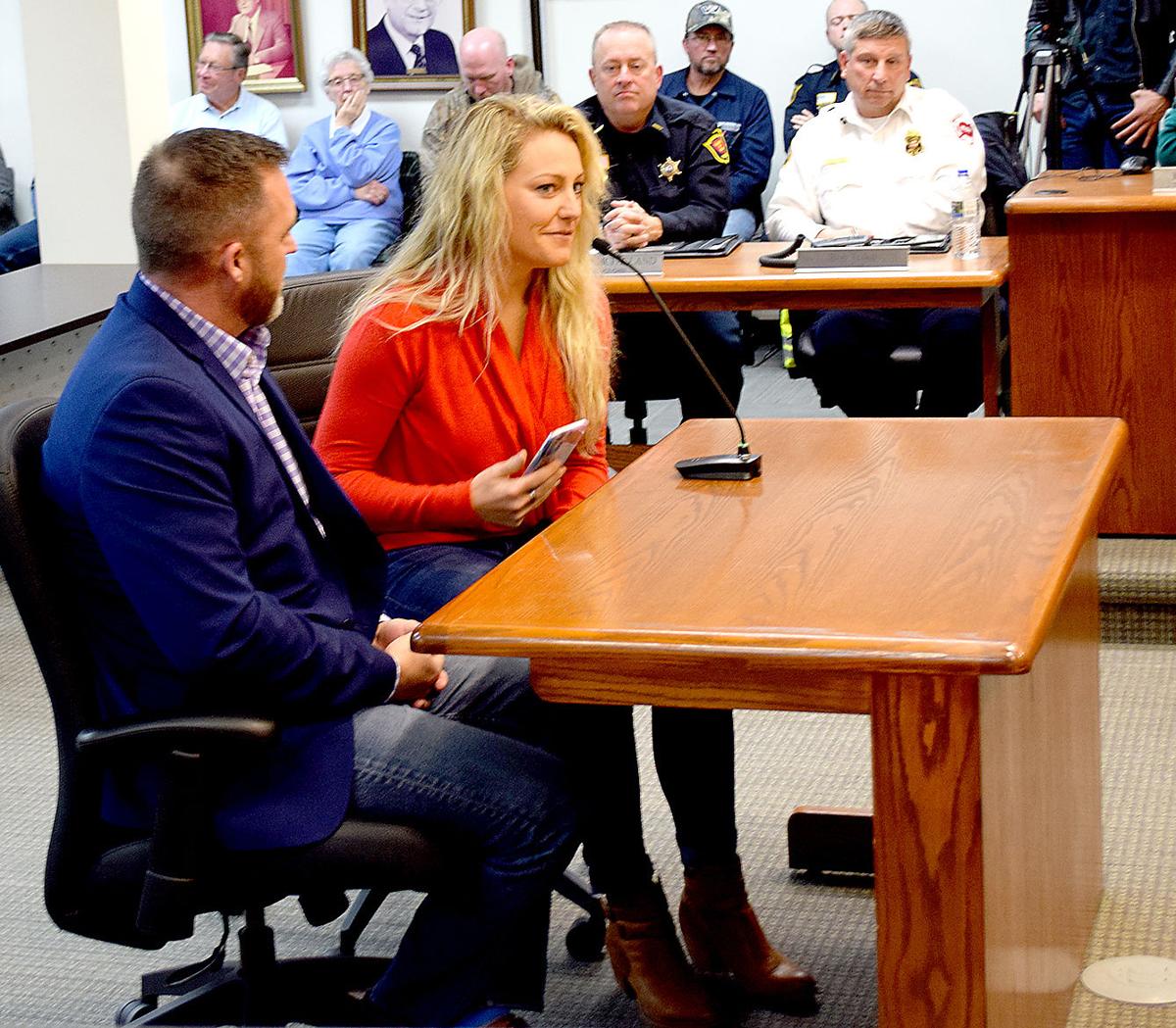 Jamie Stang-Ellis spoke about the mural she painted during the Effingham City Council meeting Tuesday. Next to her is her husband, Tim Ellis. 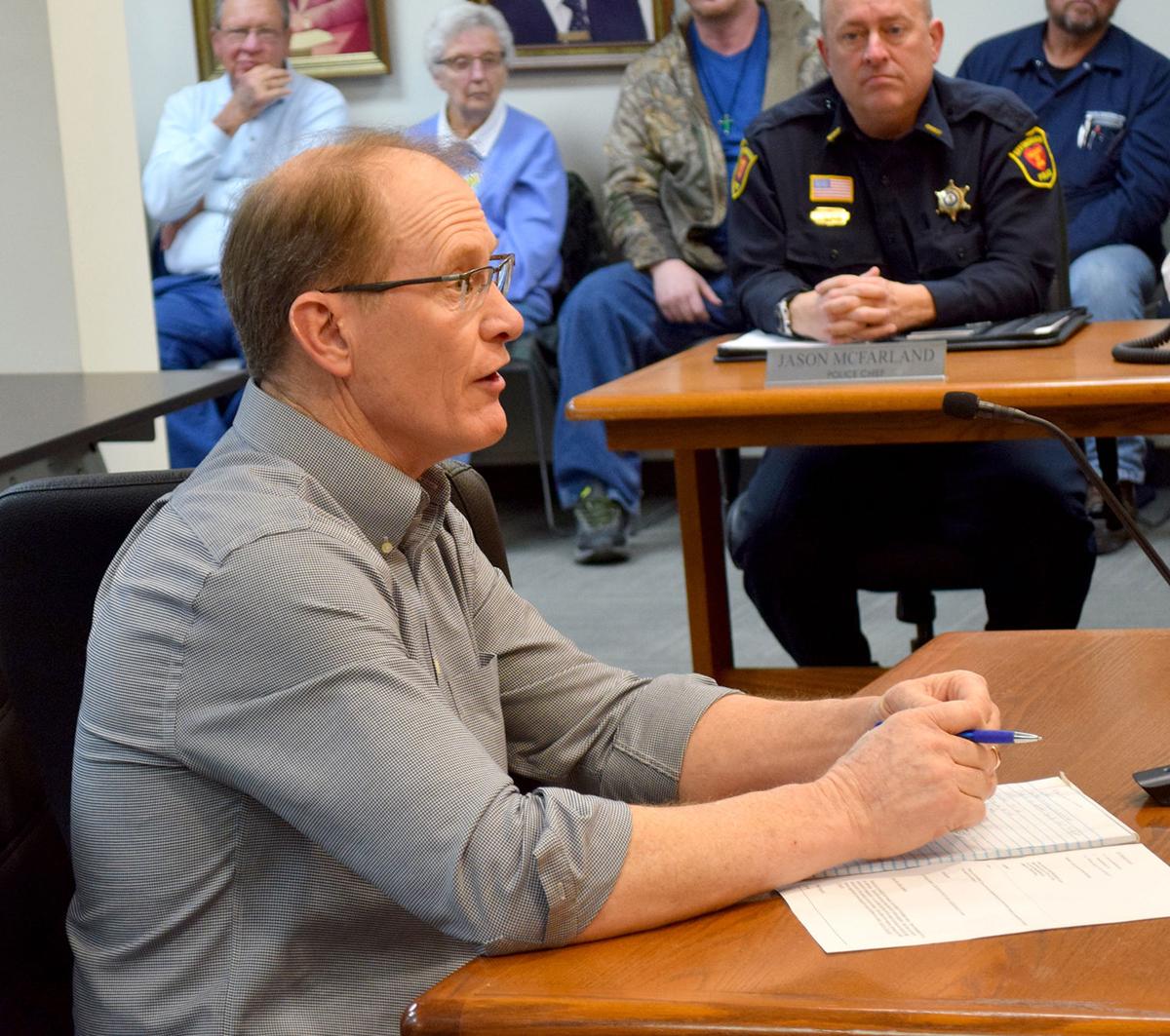 Dale Spindler was among 12 individuals who spoke in favor of keeping the cross in the mural on the Raney Street overpass, on property near Effingham High School sports complex.

The Freedom From Religion Foundation has requested the cross be removed from the mural painted on Raney Street overpass, which also is the walking path from Effingham High School parking lot to the Klosterman Football Field.

It was standing room only at City Hall, where many people came to hear comments and speak on the topic of the mural painted at Raney Street overpass near Effingham High School. An estimated 80 people were in attendance for the council meeting Tuesday, many for this single topic.

Jamie Stang-Ellis spoke about the mural she painted during the Effingham City Council meeting Tuesday. Next to her is her husband, Tim Ellis.

Dale Spindler was among 12 individuals who spoke in favor of keeping the cross in the mural on the Raney Street overpass, on property near Effingham High School sports complex.

The Freedom From Religion Foundation has requested the cross be removed from the mural painted on Raney Street overpass, which also is the walking path from Effingham High School parking lot to the Klosterman Football Field.

EFFINGHAM — It was standing room only at Effingham City Hall on Tuesday, where people implored the city council to keep a cross in a mural on city property despite opposition from a group that wants it removed.

The topic wasn’t on the agenda, so no action was taken by the council. Mayor Mike Schutzbach was absent from Tuesday’s meeting. It wasn’t determined when the item might be up for discussion by the city council.

The painting alongside the Raney Street overpass shows an American flag and white Latin cross with light emanating from it. It is a depiction of The Cross at the Crossroads, which has loomed over Effingham along the interstate since 2001 and is supported by a faith-based organization that represents many different denominations.

The issue of the cross in the mural started after the Wisconsin-based Freedom From Religion Foundation sent a letter Dec. 18 to Schutzbach, saying that a resident of this area had contacted the group about the mural located along the path between EHS campus and the school’s sports complex, which is on city property.

Twelve people addressed the council Tuesday in support of the cross. Several spoke about the symbol of hope and love the cross represents in this community. Some stated the mural is barely visible from the road and only truly visible as someone walks directly through the tunnel under the overpass that leads to the Effingham High School football field. Several asked that the city do its due diligence to research the laws and cases of the past and not act hastily to remove the cross from the mural.

A statement by Beverly Soltwedel, read by her brother-in-law, Norbert Soltwedel, said, “One can only be offended by a cross, if you choose to be offended.”

“I was coming home from my mother’s house yesterday and I looked up in the sky. The jet stream made a perfect cross. I thought to myself, should we ground all jets, because the jet stream made a cross? None of us stand at the gate of the tunnel and ask you if you are a believer or not,” said Soltwedel.

Dale Spindler, a long-time resident of the Effingham area, said he wanted to encourage the council to not be intimidated by the Freedom From Religion Foundation.

“The mural does not force religion on anyone,” said Spindler. “It depicts the landscape from the football field, which happens to include this landmark of the Effingham area.”

Also speaking in support was Jarrett Jones, who started an online petition to keep the cross in the mural. The petition, posted on Change.org, has collected more than 22,500 signatures in recent days.

“I played football on the football field all four years,” said Jones. “As someone who has walked through that tunnel more times than I can count, here’s what I see. I see community involvement for art. That mural was paid for by individuals and businesses. The full name of the tunnel is ‘The Tunnel of Pride.’ We are a community of pride.”

He added that the mural appropriately depicts the community. Shown in it are a football field, a sunset, an American flag and a cross.

“It’s not just any cross – but our cross,” said Jones. “The cross is our main landmark visible for miles. For the community of Effingham, the cross depicted on the tunnel isn’t a spiritual symbol, but a symbol of our community. It is a symbol of hardworking, generous people who support each other. The cross is what Effingham is known for and it should be saved.”

Pastor Willie Love said he’s been in the community for the past eight years. When he first saw the mural, he declared it to be one of the most beautiful things he had seen.

“To remove something like the cross – the causalities are the children. That cross represents so much for those young minds,” said Love. “As a community, this is a great opportunity. Adversity is about an opportunity to grow. If a community comes together, this can be overcome.”

Love said coming together as a community will send a message that those who live in Effingham will bond, so that something so valuable as a cross can’t be removed.

“Stand as one. That’s what the cross is all about.” said Love. “That cross represents hope.”

“The flag on the mural represents the hopes and dreams of this nation,” said Ralph W. Rounds II, who came to Effingham in 1989 to be a recruiter for the U.S. Air Force. “The cross also depicts the same hopes and dreams – and so many more things.”

The mural was painted by Jamie Stang-Ellis, owner of Stang Arts Studio and Gallery in Effingham, who told the council she also designed and sketched it.

“The mural took many hours and the work lasted two months,” said Stang-Ellis. “In 2019, I was hired and commissioned by the amazing EHS Football Moms with the goal of bringing life to the tunnel for the season ahead and for years to come. The idea was painting the landscape as what you’d see from the stands, but in a fun, creative way.”

She said ideas were shared about what would be included, but not limited to, during the process. The Tunnel of Heart Pride was formed on Facebook to help raise money and supplies for the large project.

The plan was to start with the front of the tunnel and later continue through the tunnel in the summer of 2020.

“I didn’t speak to anyone at the city about approval for this project,” said Stang-Ellis. “And I only spoke to one person at Unit 40 to clear when I would be working at the tunnel.”

The city was contacted originally by EHS Football Moms and permission was granted for the mural with the assumption it would be a sports-themed mural.

“The city was unaware it would include a religious symbol,” said City Administrator Steve Miller. “The city has initiated a preliminary review of this matter with assistance of legal counsel.”

Commissioner Merv Gillenwater said the matter is being taken seriously – not lightly.

“We are very aware of the legal issues,” said Gillenwater. “We are not only using our personal attorney, but we are using other attorneys. We are going to do our homework on this. This is very important to our community and we are aware of it. We are taking it seriously.”

Commissioner Larry Micenheimer thanked the people for speaking out about what they are passionate about.

“We will take this issue seriously, and do lots of research and make the best decision at that time.”

Commissioner Hank Stephens said the matter is a complicated issue and further research will be done.

“We are still trying to get our arms around this as well,” said Stephens. “Nothing is happening at this point.”

At the conclusion of the public speakers’ period, City Attorney Tracy Willenborg issued a statement:

“The city is of the opinion that the mural at issue does not constitute a violation of the establishment clause, as it constitutes purely private speech, having been placed by a private organization with a message that was not and has not been approved or adopted by the city. The city, however, is currently evaluating options relative to the use of the headwall, including the current mural, as well as evaluating the risks associated with each potential option.”