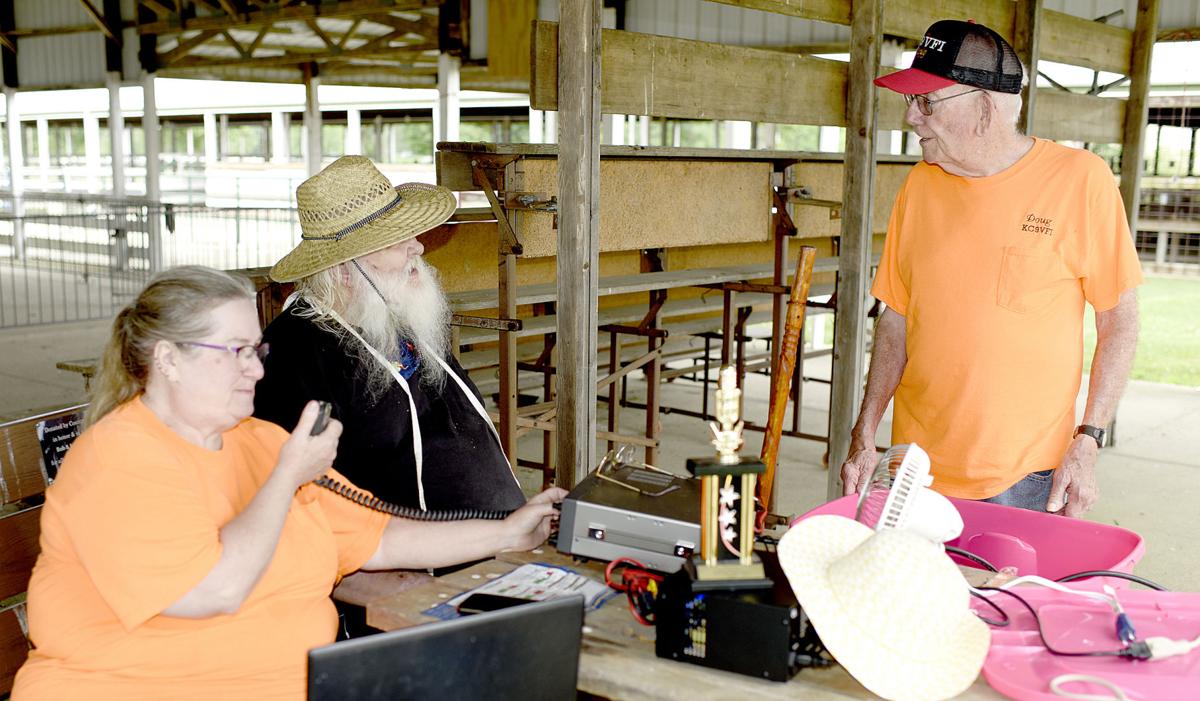 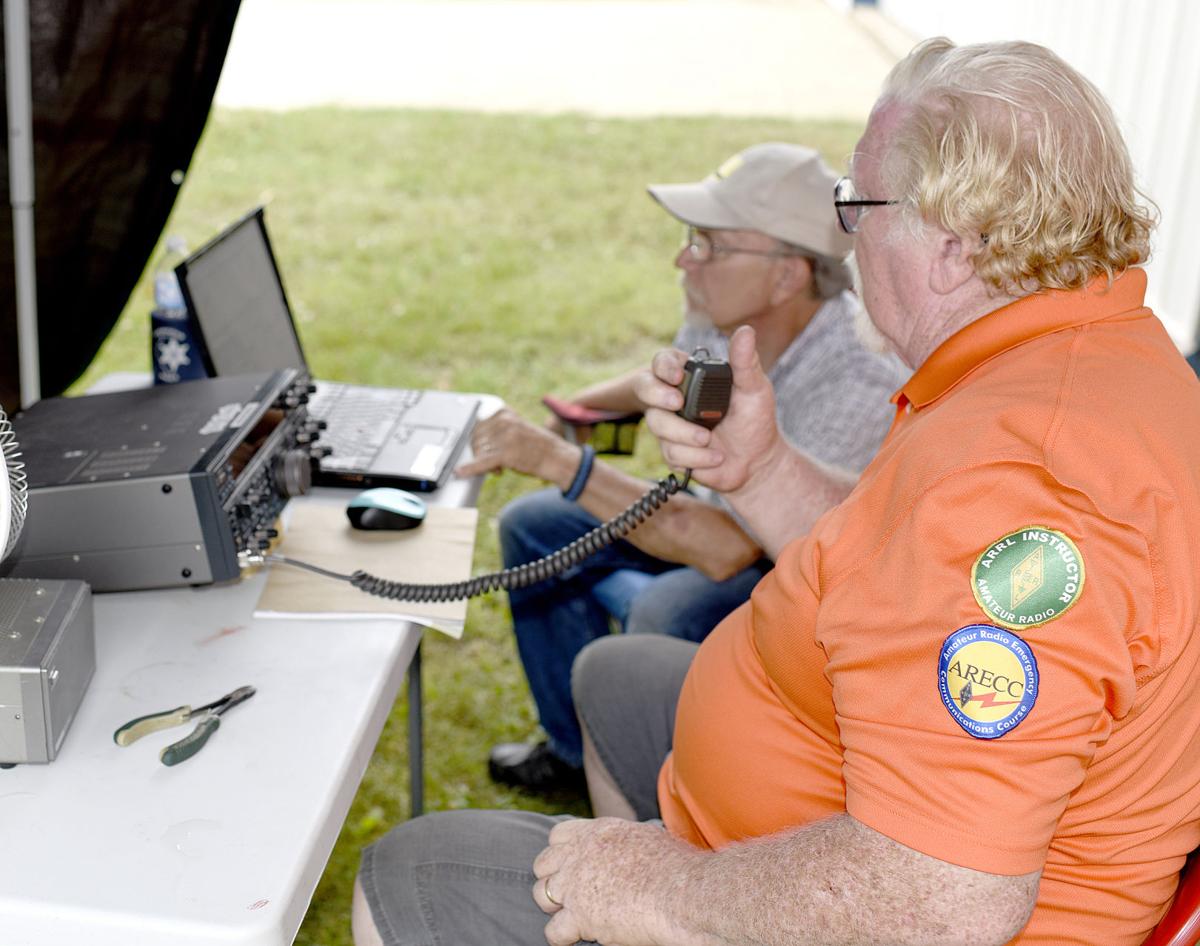 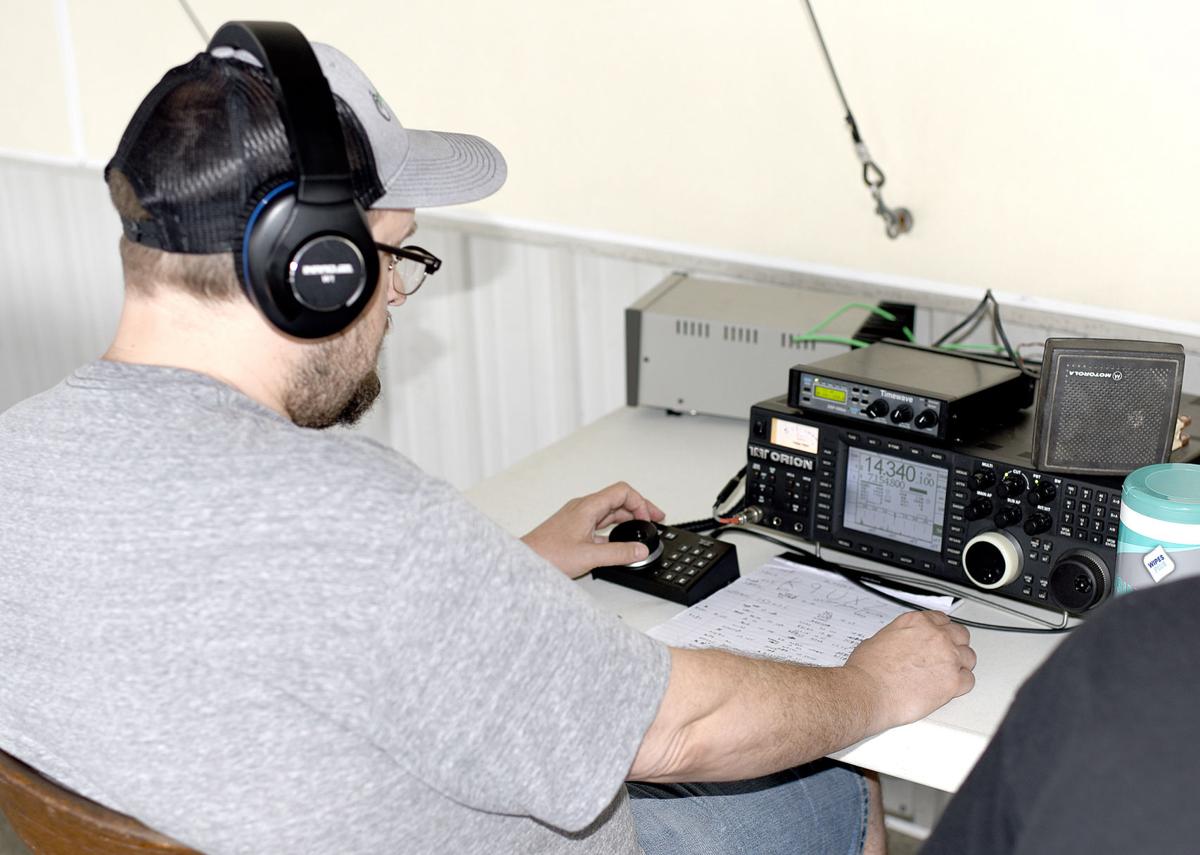 ALTAMONT — While many use high-tech devices to connect these days, members of a local amateur radio club were using an old form of communication to make contacts across the country this past weekend.

The National Trail Amateur Radio Club set up camp at the Effingham County Fairgrounds for this year’s American Radio Relay League 24-hour field day activities. The annual event encourages multiple amateur radio operators to work in remote conditions as if they were in an emergency situation.

According to longtime member Russ Thomas (WI9B), the club averages 500 contacts over the 24-hour period. He said it really depends upon the propagation, which controls how an airwave travels through the atmosphere from a radio transmitter to receiver.

“This is one of the most popular events amateur radio operators do every year,” Thomas said.

Due to the COVID-19 pandemic, the ARRL organization modified the rules this year.

“This year people can operate from their homes if they want to practice the social distancing,” Thomas said. “Other than practicing social distancing, there has been no other change — except for the bad weather we’ve been having.”

“Altogether we will have about 20 people for this exercise,” Thomas said, adding there are 31 members in the National Trail Amateur Radio Club. The club originated in Fayette County in 1958 and eventually migrated to Effingham County as membership grew over the years.

Remote radio stations were stationed in several locations around the fairgrounds, including the 4-H show area and fair buildings.

One radio station was talking to people on the East Coast while another was focusing on stations in the south and western portions of the U.S.

To get the best reception, club members started setting up their radio communications headquarters early Saturday morning installing several different types of antennas — from conventional to homemade — around the fairgrounds.

“We have antennas strung between the various trees,” Thomas said. “Hanging antennas between the trees is by far the most popular method of getting an antenna up.”

Thomas said most of the antennas strung around the fairgrounds were simple dipole antennas. But there was a special antenna set up between two trees.

“They call this the junkyard antenna. It’s just made of metal stuff,” Thomas said. “Made up of a rain gutter downspout and fencing that goes around flower gardens.”

Thomas hasn’t missed too many of the annual radio relay events since he started becoming interested in amateur radio many years ago.

Kurt Mette (KD9NBN) started getting into amateur radio after he retired a couple of years ago. After a friend of his died, he inherited all of his amateur radio equipment.

“I took my test and here we go,” Mette said. “It’s a challenge to learn something new.”

“At first, I was scared to get on it,” Mette admitted. “For the first six to eight months, I just sat and listened.”

Mette said he finally started communicating on the radio starting on the 2-meter band of frequencies.

“And I’m learning more from him (Thomas),” Mette said. “This radio that I inherited is like getting a jet airplane and someone telling me to go fly it. It’s pretty complicated.”

Doug Neller (KC9VFI) got his first amateur radio license when he was 13 years old.

“It was 70 years and three days ago when I got my license in Detroit, Michigan,” Neller said. “My parents drove me to Detroit to stand in front of those intimidating FCC (Federal Communications Commission) guys. You had to know Morse Code in those days.”

In 1950 after he received his novice class license, Neller was required to get his general class license within a year.

“I built my own equipment,” Neller said. “At age 12, I was working on TV sets and putting HAM radio equipment together.”

Neller lost his first amateur radio in a fire and in 2012 he started broadcasting again.

“It’s a great hobby, but it’s a challenge sometimes. It takes a lot of testing and a lot of patience,” he said.

Neller said the greatest contact he has had over the years is with someone in New Zealand 8,046 miles away. That was in May.

“When all else fails, amateur radio is there,” Thomas said. “We can operate on solar panels, batteries and generators. We can operate whenever, wherever.”

“If they have to set up a shelter, we can set up a radio station where they can call back to the county emergency operations center,” Thomas said. “In fact with our capabilities here in our county, we can talk to anywhere in the state we wanted to with amateur radio.”

“We had a net (network) for two months where we contacted each other throughout the state,” Thomas said. “We did this to prove to various health departments that if they needed statewide communications, amateur radio operators can provide them with that.”

“Out of the 102 counties in the state of Illinois, 93 of them checked into the net. The counties that didn’t check were just not participating,” Thomas said.

“Field day is a good exercise to prepare us to operate in adverse conditions,” he said.