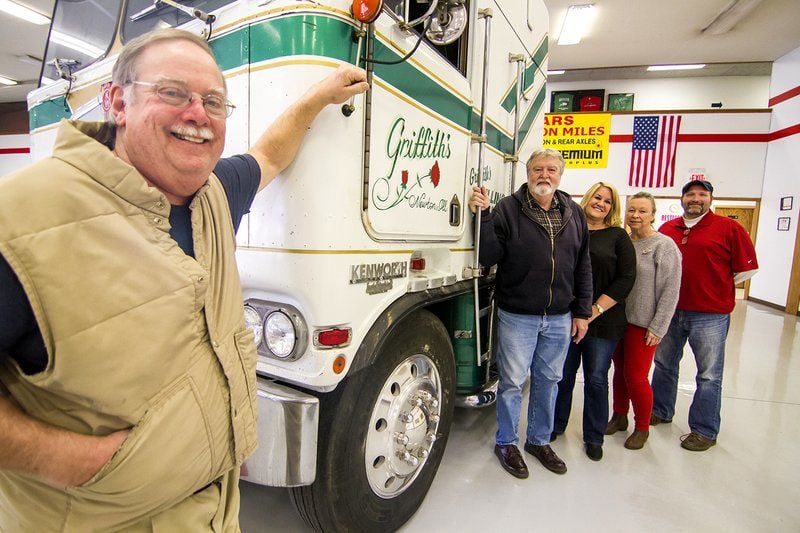 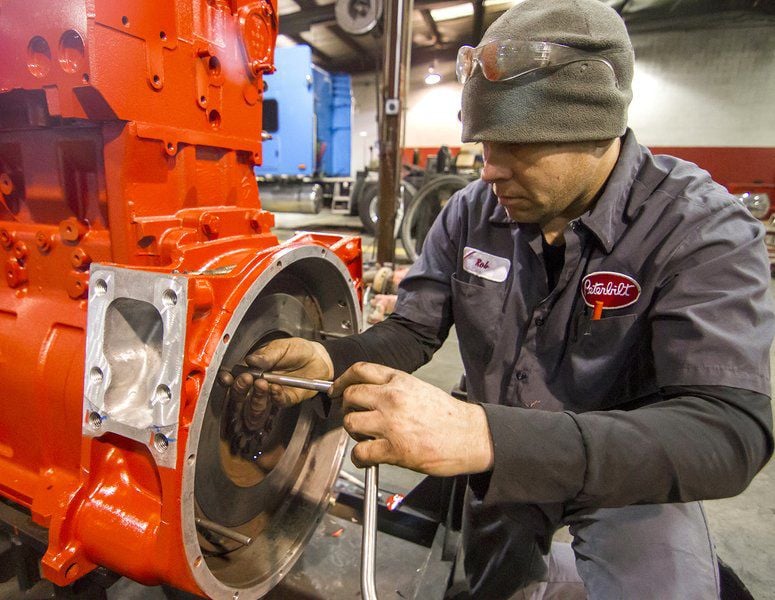 Technician Rob Pendlay chases bolt threads inside the repair shop at Heartland Peterbilt in Effingham. Pendlay is one of 65 employees who recently learned they will receive a $1,000 bonus from their company, which credits the new tax law for being able to do so.Keith Stewart Photo 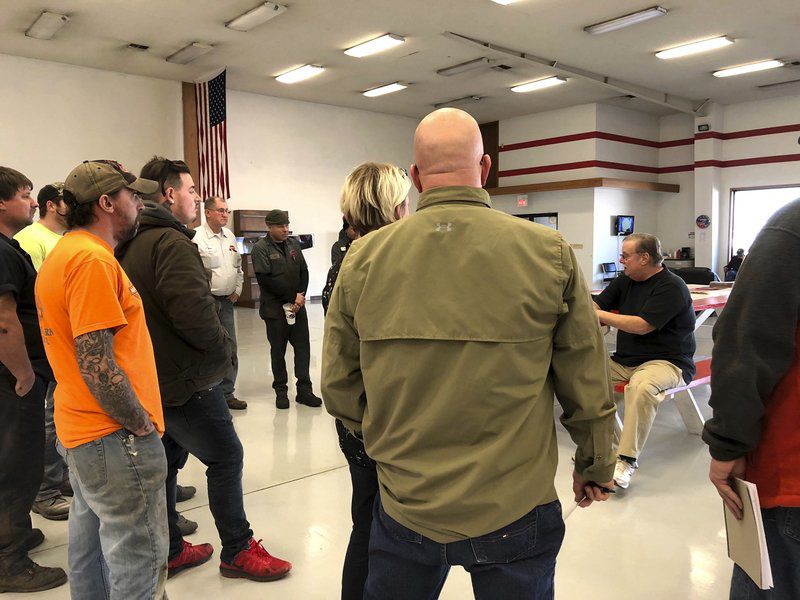 Employees with Griffith Trucking, Heartland Peterbilt and Heartland Classics listen during a meeting Tuesday as the companies' owner Tony Griffith announces they will be receiving $1,000 bonuses this year thanks to the new tax law. Submitted Photo

Technician Rob Pendlay chases bolt threads inside the repair shop at Heartland Peterbilt in Effingham. Pendlay is one of 65 employees who recently learned they will receive a $1,000 bonus from their company, which credits the new tax law for being able to do so.Keith Stewart Photo

Employees with Griffith Trucking, Heartland Peterbilt and Heartland Classics listen during a meeting Tuesday as the companies' owner Tony Griffith announces they will be receiving $1,000 bonuses this year thanks to the new tax law. Submitted Photo

In President Trump’s State of the Union address Tuesday evening, he made the case that his recent tax law is the reason why companies across the country have announced bonuses, wage increases and other benefits for their employees.

Tony Griffith, who owns three companies in Effingham, agrees wholeheartedly. So much so that this week he announced to his 65 full-time employees that he will be giving each of them a $1,000 bonus.

“I'm excited for my employees," said Griffith, who anticipates he'll save about $100,000 under the new tax law. "This gives them hope that they are not just working at some humdrum job paying them the same until they die."

Griffith owns Griffith Trucking, inside of which is the moving company, Broadway Express. He also owns Heartland Peterbilt and Heartland Classics in Effingham and Newton.

In a meeting on the showroom floor at Heartland Peterbilt on Tuesday, employees learned about the bonus, which will be distributed in weekly increments over the course of the year in what amounts to just less than $20 a week.

"I’ve never really had anything like this happen before," said 24-year-old Brian Roberts, a mover with Broadway Express. "It’s the first job I’ve ever had to get any kind of bonus or anything."

Roberts began working at Broadway Express just over a year ago and says he sees the bonus as a gesture of appreciation.

"I think it's great," said Roberts. "It being $20 a week doesn't say a whole lot at one time but to just be appreciated means more to me than money does."

Roberts lives in Stewardson, so the extra money each week will help him pay for gas.

"It’s about seven miles one way and I pick up people for work," he said. "It will definitely help in that aspect. It will be like coming to work for free."

Husband and wife Kristi and Rich Stoddard, who both work at Heartland Peterbilt, are also excited about the bonuses. With three children, they say it's a more than welcome gesture.

Griffith said his three companies routinely offer wage increases and bonuses, but nothing like what he is offering now. He also expects to provide more wage increases in the future, thanks to the new tax law.

Critics of the new tax law point to the $1.5 trillion it is projected to add to the deficit while supporters, meanwhile, say that doesn't account for any economic growth spurred by the tax cuts — a sentiment with which Griffith agrees.

"I'm 100 percent proof positive that no matter how the critics describe this, they're wrong," said Griffith. "From everything I've heard on the news, like with Apple coming back to the United States, we're not talking chicken feed here. We're talking billions of dollars."

Large companies like Apple, FedEx, Home Depot and Wal-Mart have recently announced bonuses and/or wage increases and other benefits, citing the new tax law as the reason.

But Griffith said that to his knowledge, he’s the only small, locally owned company giving out such bonuses. He wishes others would do the same.

“I haven’t seen any of this in Vandalia, Mattoon, Charleston, Robinson, Olney, nowhere," said Griffith. "I didn’t do it to really draw attention to ourselves. But if we have to take the first step to bring the rest of them to see what’s going on, what a boon it would be for Effingham."

Griffith acknowledges the bonus isn't completely altruistic. He hopes it will also serve as a way to recruit more quality employees. Not only for his companies, but for the area.

"People who hear about this might say, 'I should be working there,'" said Griffith. "Or, 'I should move to Effingham ... there are help-wanted signs all over. We need to get people here."

For the Stoddards and others, every bit counts.

"We’ll be able to pay more bills," said Rich Stoddard. "We might be able to go out for dinner. Do the little things we might not be able to do until this kicks in. Honestly, your paycheck, you know where it’s going even before you get it. Now we have a little extra."