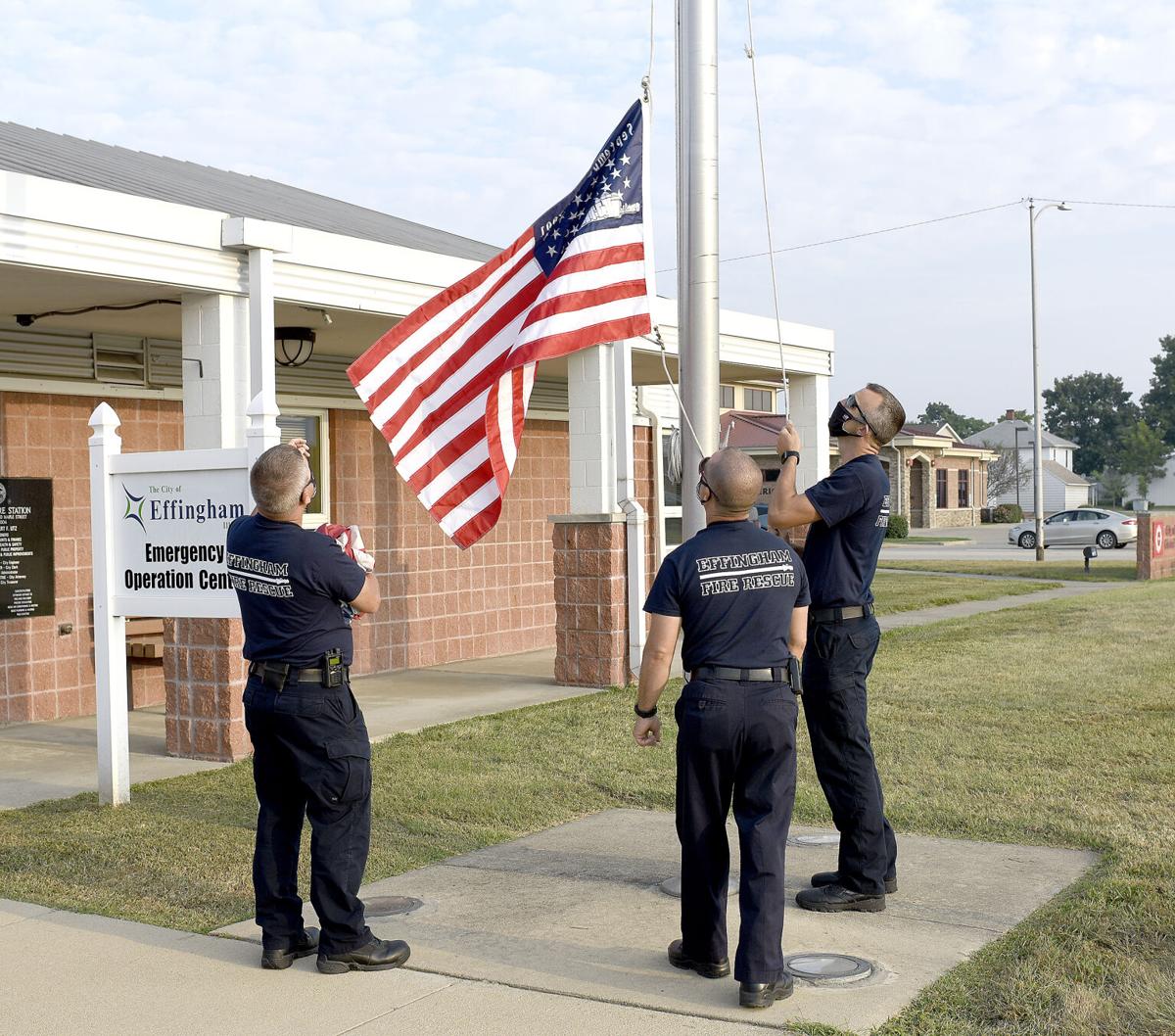 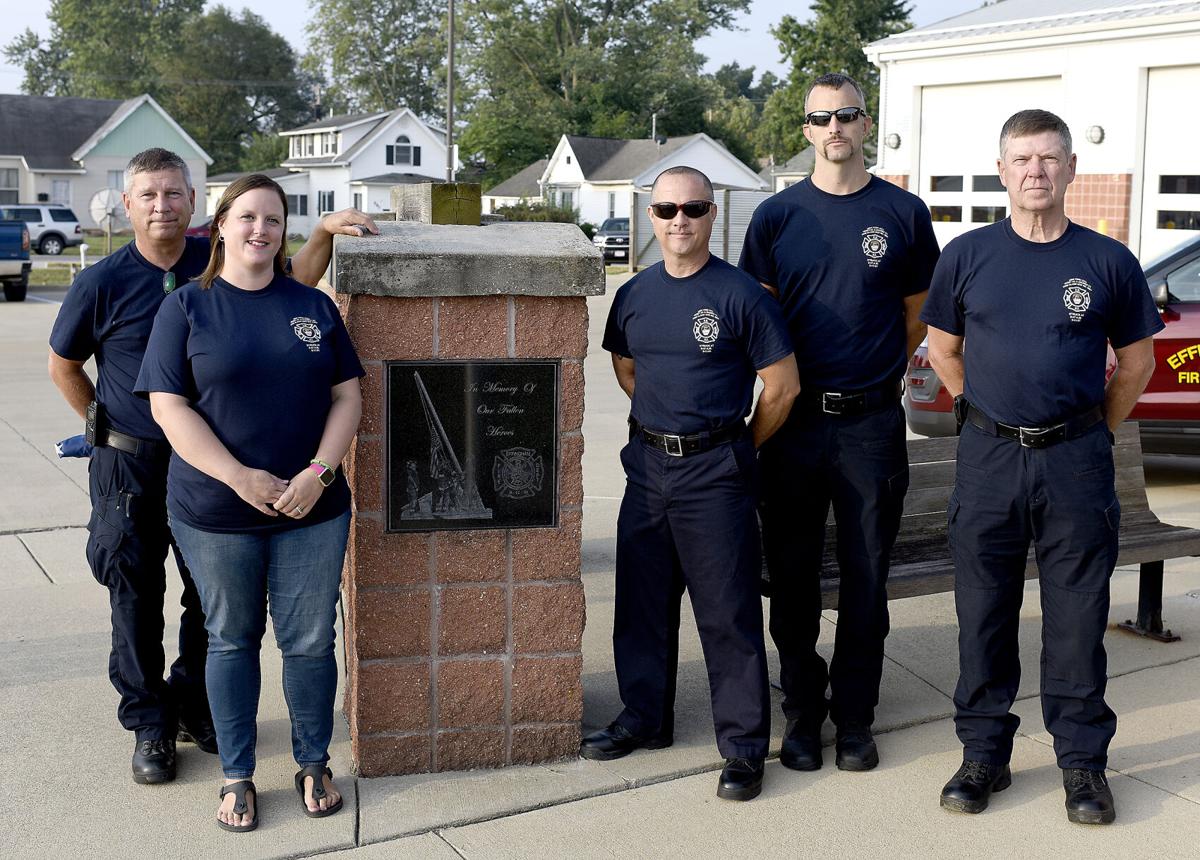 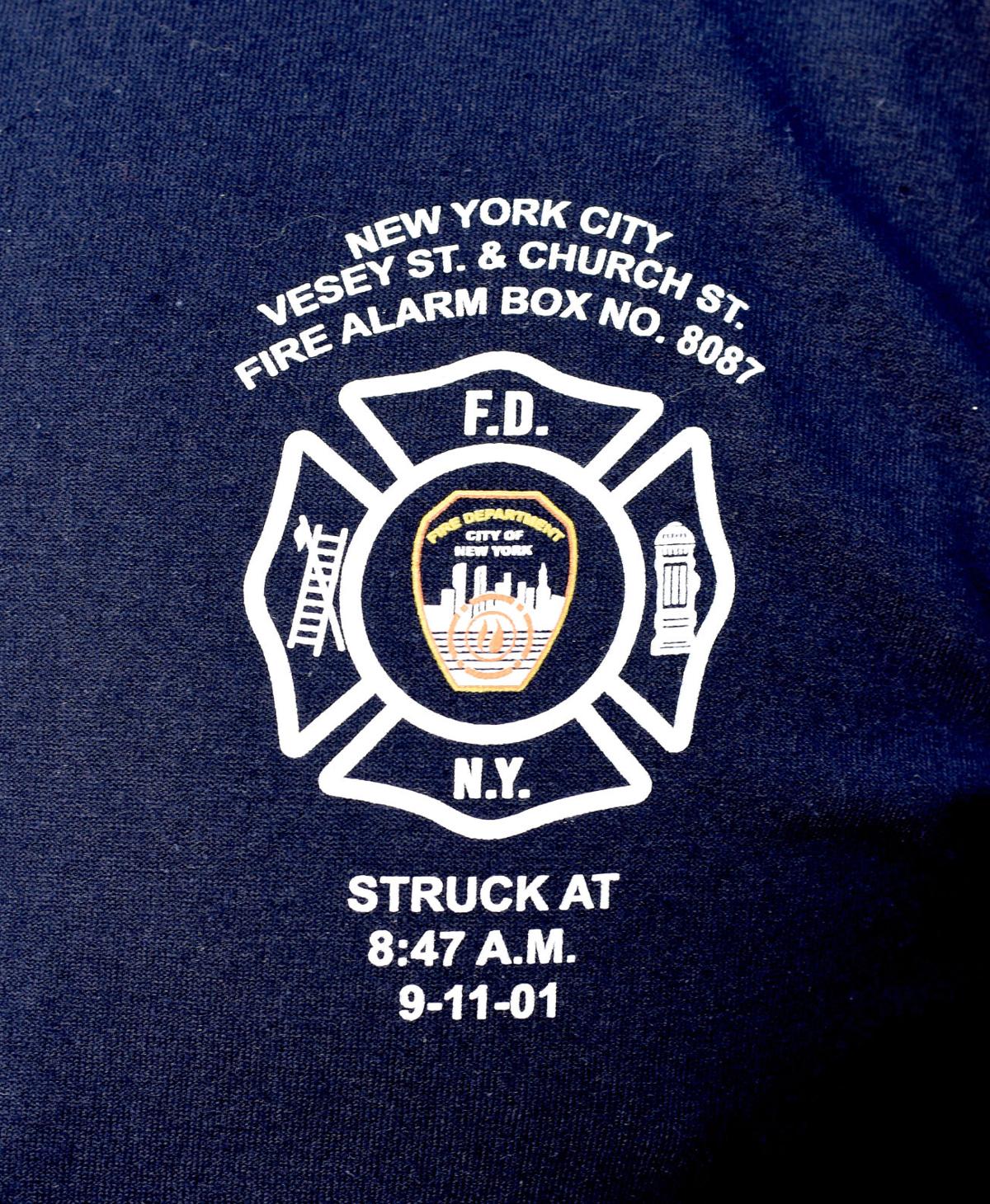 Members of the Effingham Fire Department wore commemorative 9/11 t-shirts Friday and plan to were them in Sept. The shirt is designed to commemorative the first fire alarm box struck in New York on Sept. 11, 2001 at 8:47 a.m.

Members of the Effingham Fire Department wore commemorative 9/11 t-shirts Friday and plan to were them in Sept. The shirt is designed to commemorative the first fire alarm box struck in New York on Sept. 11, 2001 at 8:47 a.m.

COVID-19 didn’t stop members of the Effingham Fire Department from remembering 9/11 this year.

THe department held an informal remembrance Friday morning at Fire Station Number One, limited to only a few participants.

At 7:47 a.m. central time – 8:47 a.m. eastern time, when the first fire alarm box was struck 19 years ago in New York – Effingham Fire Chief Bob Tutko, Captain Jeff Landrus and Firefighter Matt Carpenter raised a special commemorative Sept. 11, 2001 U.S. Flag to honor those who lost their lives during and after the 9/11 attack on the World Trade Center.

“We wanted to make sure people do not forget the sacrifices that were made by the 343 firefighters, 212 police officers and dozens of citizens who were either injured or killed as a result of 9/11,” Tutko said. “I think it is important as time passes people don’t forget.”

Tutko said honoring citizens affected by 9/11 was just as important as the firefighters and police that lost their lives. He said a range of citizens from those who overtook the plane before it made its way to the Capitol to citizens who helped people escape the burning towers should all be recognized.

Tutko said firefighters responding to the scene in New York 19 years ago are still suffering from cancer and medical problems that was caused by the 9/11 recovery efforts.

“So, this is still ongoing,” Tutko said. “I would hope that people would remember 9/11 and also remember that there are people out there that still want to hurt Americans and still want to destroy the American way of life.”

He said it is important for people to remember lessons in history so Pearl Harbor and 9/11 won’t happen again.

The last time he talked to Fredericks was when they were leaving the conference.

“I remember saying to him, if we didn’t see him before, we would see him at the conference the next year,” the chief recalled.

“He was one of the firefighters who lost their lives during 9/11,” Tutko said. “It’s just one of those things that sticks with you.”

Tutko said 19 years ago he was working two jobs: One as a Lieutenant for the Downers Grove Fire Department and another with Village of Frankfort Department of Public Works. He recalled how he first learned of the attacks.

“I was just pulling into the driveway to grab a change of clothes when I heard the news report about the first plane,” Tutko said. “At that point nobody knew what kind of plane had hit the tower.”

He said after he arrived at his public works job he watched news reports on TV.

“When I arrived at my second job we saw the fire and the smoke and then shortly thereafter we watched the second plane hit the tower,” Tutko said. “We knew at that point America was under attack by persons unknown.”

Tutko saw the damage in New York three weeks after 9/11 while on a fire-related business trip to Pennsylvania. He said a police officer at the scene took them on a tour of the damage.

“It was still smoldering and active fires were still burning,” Tutko said. “Hopefully we’ll never see anything like that again.”

“I was in pure shock with what was going on,” Landrus said.

Landrus remembers listening to the radio because he didn’t have access to a TV when the towers were attacked. He didn’t see the images until later.

“It really didn’t hit me until I watched it on TV,” Landrus said.

EFD Firefighter Matt Carpenter was a junior in high school on Sept. 11, 2001.

“I was driving to school that morning when I heard it on the radio,” Carpenter said. “When we got to school, I can remember we watched it all day on TV.”

City of Effingham Emergency Management Agency Coordinator Dave Budde, who works with EFD, was working at World Color Press back on that day. Budde was an emergency medical technician working at the printing plant.

“I walked into the health station and Lead EMT Larry Thies informed me the first tower had just been hit by a plane,” Budde said. “I was shocked. It was hard for me to understand how anything so devastating could happen.”

“We live in a community where things like that are not heard of,” Budde said.

Budde retired in April 2017 as a pay-on-call EFD firefighter after serving 17 years.

EFD Executive Secretary Jenn Alwardt was a senior in high school when the attacks happened.

“I was shocked and surprised something like this could happen,” Alwardt said.

Chief Tutko said his firefighters on Friday wore a special commemorative t-shirt to honor those firefighters who perished. Each T-shirt has a shield over the heart honoring the New York City Fire Department with its logo, along with the date and time the first fire alarm box was struck on the morning of 9/11.