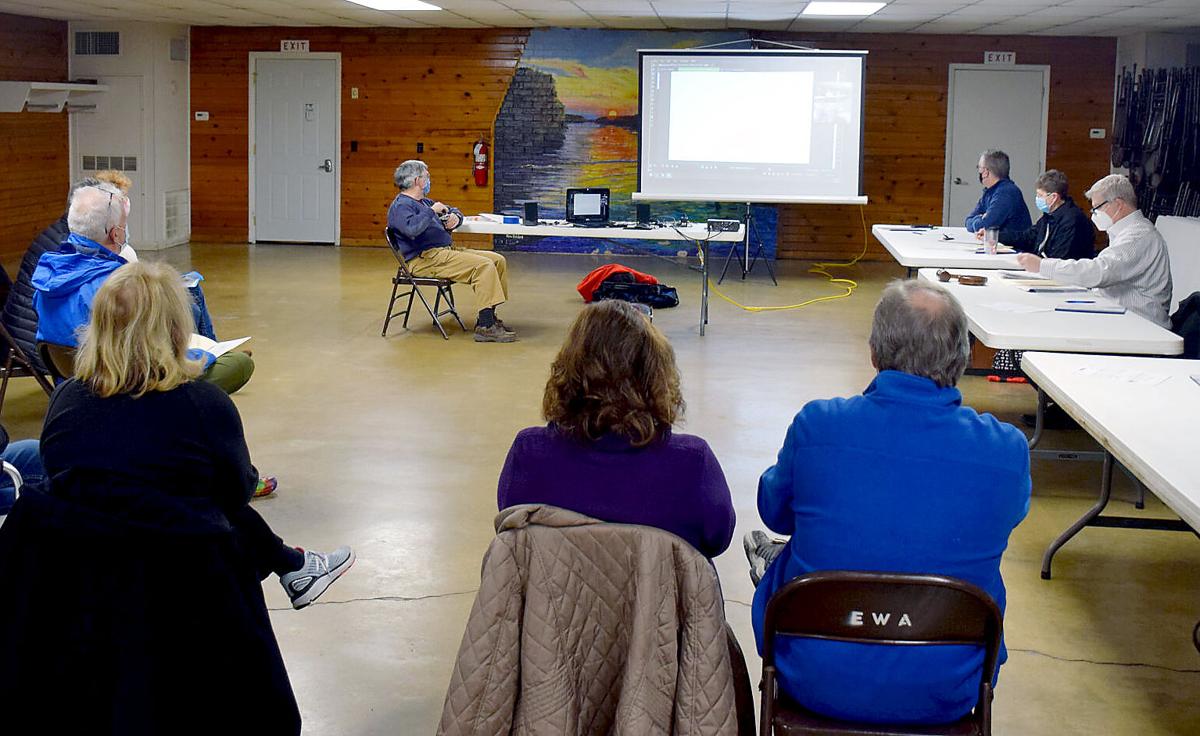 A group hears about the plans for Pearson Peninsula Park from the project’s landscape architect Bruce Brown at the most recent Effingham Water Authority meeting. 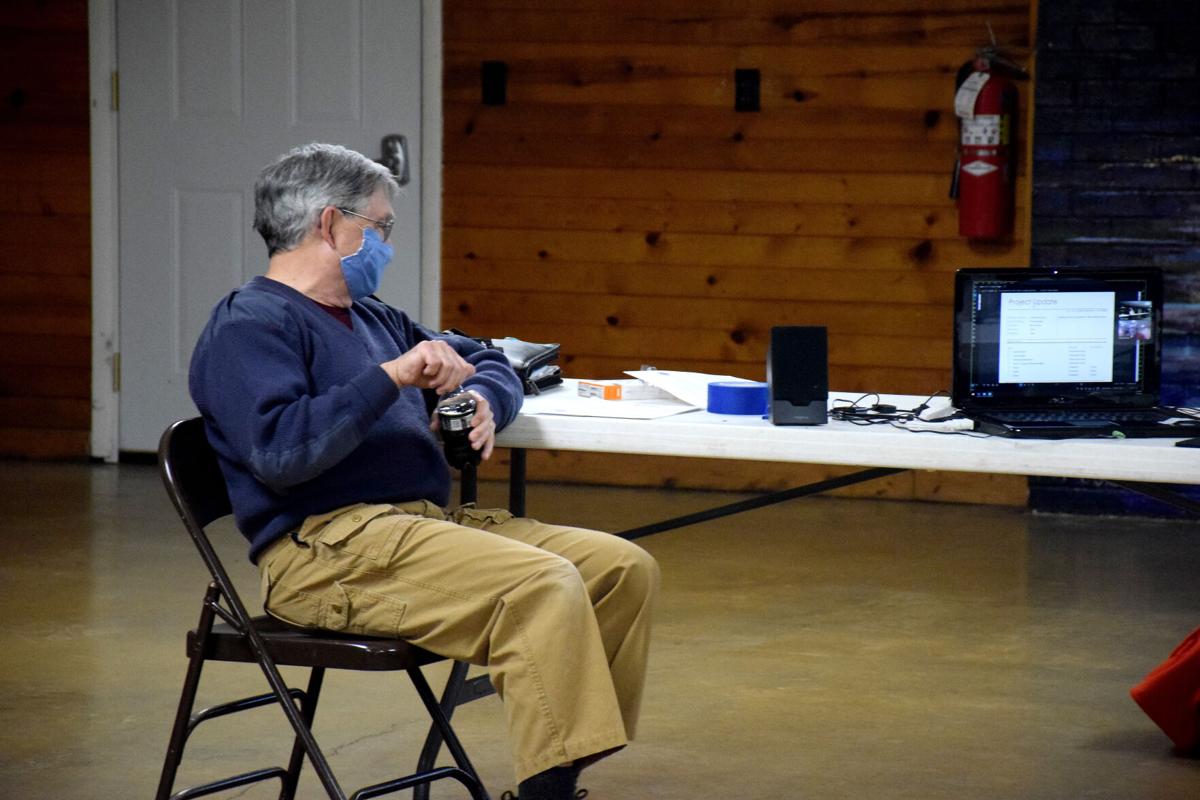 Tom Ryan, mastermind behind Person Peninsula Park, at the most recent Effingham Water Authority Meeting. There, he helped present the plans for the park and ask the board for approval of a $300,000 proposal for playground equipment.

A group hears about the plans for Pearson Peninsula Park from the project’s landscape architect Bruce Brown at the most recent Effingham Water Authority meeting.

Tom Ryan, mastermind behind Person Peninsula Park, at the most recent Effingham Water Authority Meeting. There, he helped present the plans for the park and ask the board for approval of a $300,000 proposal for playground equipment.

The Effingham Water Authority took a step toward building a new 30-acre park on Lake Sara’s north shore. The Water Authority recently approved a proposal for $300,000 of playground equipment from Burke, a national manufacturer of play structures based in Fond du Lac, Wisconsin.

The development, called the Pearson Peninsula Park, has been in the works since 2017 and is slated to include multiple playgrounds, a disc golf course, new bathhouse facilities and more, to be rolled out in multiple phases over the next several years.

Slated for an opening this spring, the timeline for building the park’s first phase is uncertain because of slowdowns with the state’s Department of Natural Resources, which is providing half of the funding for the $800,000 project.

“There have been no vouchers cut from the state treasurer’s office,” said Tom Ryan, who leads the Parks and Recreation Committee with EWA and has been the mastermind behind the project. “At the end of this month, we’re going to have to say ‘Do we want to go forward?’”

The Department of Natural Resources should have sent $200,000 to EWA within 60 days of Sep. 11, 2020, according to Ryan. The state has yet to make those funds available and it could delay the project further.

“Staff in the Office of Grant Management and Assistance and our fiscal office have had to grapple with some delays due to the ongoing pandemic,” said Rachel Torbert, Deputy Director with the department. “Effingham Water Authority’s advance payment for the OSLAD Grant is currently entered in our system for payment.”

Torbert went on to say that she couldn’t provide a definitive timeline, but that the issue should be resolved “soon.”

Despite the slowdown, the project continues to move forward.

“If we were delayed, while it won’t be nice, we would not be in any kind of serious trouble with the state,” said Bruce Brown, the Farnsworth Group landscape architect managing the project. Typically, groups have two years to use this type of grant money, per state law, which Brown believes leaves them enough time to wait out any setbacks.

Ryan, though frustrated, has several contingency plans for what to do if the funds don’t come soon.

“We’ve got places to store it, if we have to,” said Ryan, referring to the playground equipment. “We may be able to build one playground. We designed the plan so that we can move forward at any point.”

Ryan also discussed the possibility of using a line of credit to fund some of the costs while waiting for state funding to come through.

The Department of Natural Resources originally announced that EWA received the grant back in January of last year, with the governor discussing the importance of public parks in a press release at the time.

In addition to the funds from the state, the park is also being funded through donations to Lake Sara Forever, a fund within the Southeastern Illinois Community Foundation.

EWA Chairman Rob Brown said the park will be a positive influence for Lake Sara and its community.

“It’s going to provide facilities for people who don’t normally live on the lake to enjoy the lake,” he said. “That’s what the objective is: To make it more welcoming.”

Inclusivity plays a prominent role in the design of the park as well, with features throughout the park conforming to the Americans With Disabilities Act, even when not strictly necessary.

“An ADA person can park in the parking lot,” said Brown. “Make their way all the way down the hillside onto the beach and to the water.” This includes rollout mats, allowing wheelchair users to use the beach.

Ryan says this stems from both the requirements attached to state funding and from a 2017 survey of potential park users conducted by the University of Illinois that helped them direct the design.

“You can get a feel for how important it is for parents that their kids not feel left out,” said Ryan, referring to the survey results.

He added that in some parts of the design, they had to get creative.

“There are no ADA standards for disc golf,” he joked.

The disc golf course, which was one of the most requested features on that survey, will feature three holes designed to be used by people with varying mobility, like people in wheelchairs or those who struggle with gradients and uneven surfaces. Since the course was built among trees to provide a challenge, Ryan says it would have been prohibitive to design the whole course in such a way.

The playground equipment was sourced not through a traditional competitive bid, as many municipal projects are, but through OMNIA Partners (formerly known as the National Intergovernmental Purchasing Alliance).

This is a cooperative purchasing agreement between government agencies that aims to facilitate purchasing at competitive prices without needing a bidding process. Because the group uses competitive processes to set prices, this fulfills state requirements for municipal purchases, according to Ryan.